DISTURBED has confirmed the rescheduled 2021 dates for its “The Sickness 20th Anniversary Tour”, co-produced by Frank Productions and Live Nation. The amphitheater tour, with very special guest STAIND and BAD WOLVES, will begin on July 7, 2021 at iTHINK Financial Amphitheatre and all previously purchased tickets will be honored for their rescheduled dates. “The Sickness 20th Anniversary Tour” celebrates the two-decade anniversary of the band’s seminal album “The Sickness”. On this tour, the band will perform songs off the album, as well as tracks from their most recent studio release, “Evolution”, and their extensive catalog.

All dates on this tour have been rescheduled with the exception of the Chula Vista, California show, for which tickets will automatically be refunded. If ticket holders cannot attend the new rescheduled date or would prefer a refund, they will receive an email directly allowing them to request one. For any further ticketing inquiries, please visit this location or reach out to your point of purchase. 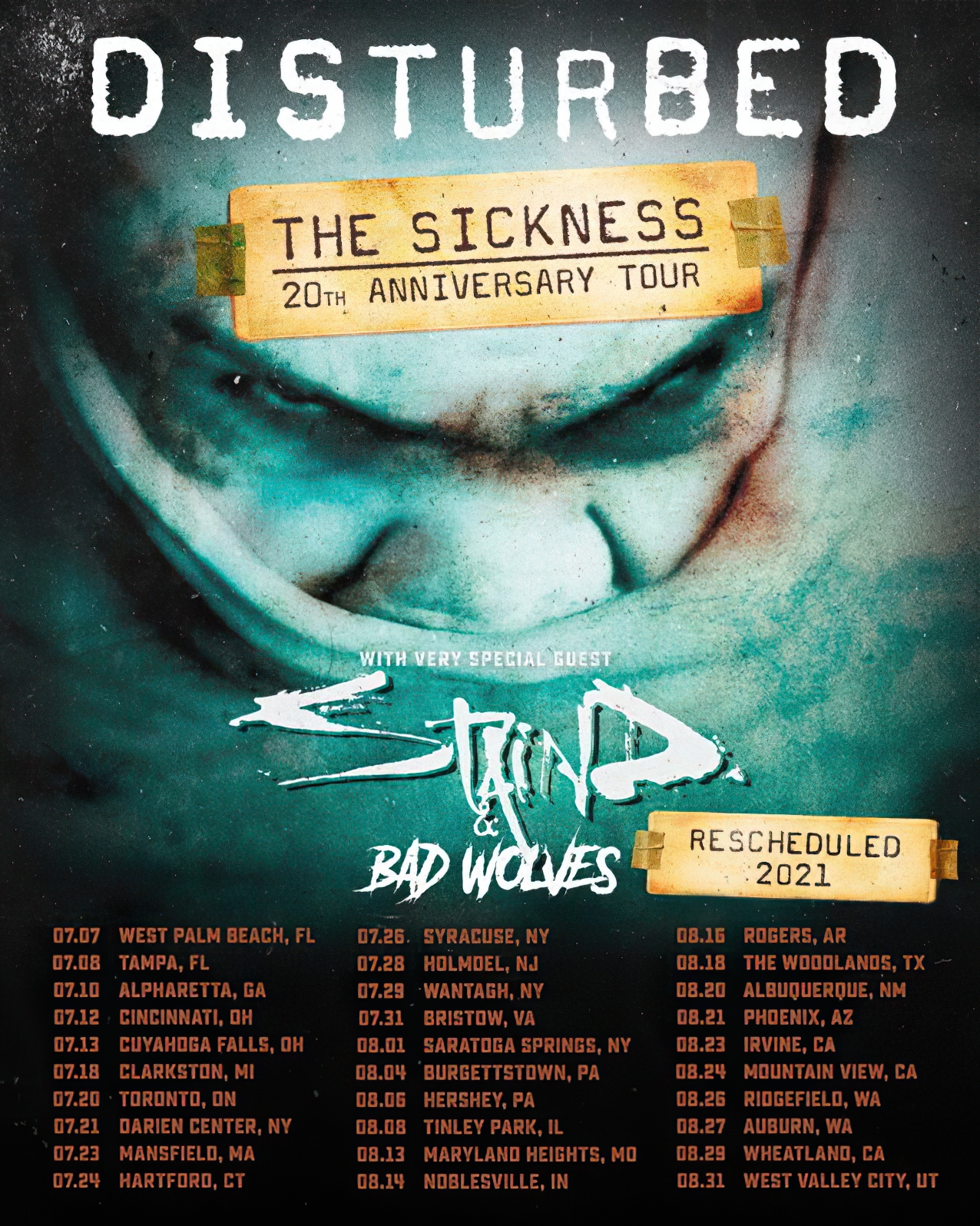 DisturbedThis past March, DISTURBED frontman David Draiman confirmed that the band won’t perform its 2000 debut album “The Sickness” in its entirety on “The Sickness 20th Anniversary Tour”. “No, we won’t do the entire album, but we’re going to do a ton of ‘Sickness’ material, deeper cuts, stuff people haven’t heard us play off the record for a while, and definitely a huge portion of material will be ‘Sickness’-oriented,” the singer told Billboard.com.

“You can’t, unfortunately — or fortunately, depending on how you look at it — as a band at our level, at this point of our career, you can’t just go out and play one record because everybody came on board at different stations,” he explained. “They want to hear what they fell in love with. There’s definitely new production elements that we’re toying with, that are elements that we’ve maybe used during ‘The Sickness’ era, but that we’re doing in a new and more provocative way. That’s about all I can say.”

In 2010, DISTURBED celebrated the tenth anniversary of the release of “The Sickness” by reissuing it with exclusive b-sides and expanded artwork, as well as a first-time-ever vinyl edition. Released on March 7, 2000, “The Sickness” is DISTURBED‘s best-selling album to date, thanks to such hit singles as “Stupify”, “Voices” and “Down With The Sickness”.