ROTTING CHRIST were the first Greek band to break out from the underground and make their impact felt worldwide.  In a signature style honed by 30 years of toil and triumph, the quartet has delivered heavy metal thunder so epic that it could have been forged by the gods themselves. Band’s front-man Sakis Tolis proved to be a jovial and introspective fellow when he chatted with Sonic Perspectives Texas Bureau Chief Gonzalo Pozo about his love of life, love of metal, and Rotting Christ‘s slamming new offering The Heretics, out February 15 via Season of Mist. The Heretics was recorded by ROTTING CHRIST guitarist George Emmanuel at his studio Pentagram and mixed by Jens Borgen (AMON AMARTH, AT THE GATES, ARCH ENEMY, and more).

Additionally, ROTTING CHRIST have announced new European tour dates together with MOONSPELL this fall. The massive rampage kicks off at the Markthalle venue in Hamburg (DE), and continues to wreck havoc throughout 22 more countries before a final curtain at the Backstage in München (DE). A full list of confirmed shows can be found below. 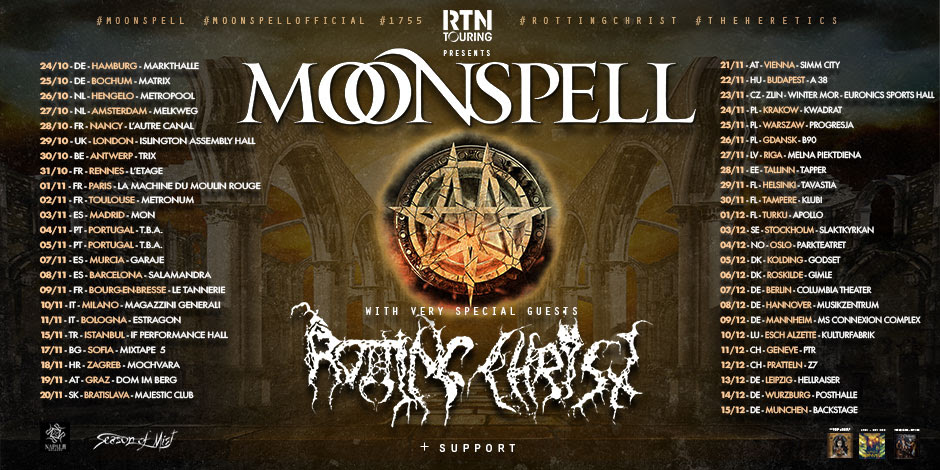 “Everywhere you go,” Tolis stated, “there are metal-heads, and Rotting Christ will be there”. “Even in Turkey,” he stresses, demonstrating his commitment to the metal cause by routinely performing for the Anatolian neighbors whose nation waged war against Rotting Christ‘s native Greece as the Ottoman Empire collapsed. Turkey, Tolis reminds us, “once treated us as enemies.”

And that’s the great paradox of metal in a nutshell: uniting Greek and Turk, skeptic and believer, Arab and Jew, where diplomacy often fails. Curiously, where fellow Mediterranean metallers Orphaned Land have used the love of religion to unite warring factions, Rotting Christ have used skepticism and outright hostility to religion to achieve the same ends. Yet another paradox.

Tolis was such a joy to interview, and was so full of memorable and even poetic quips, that even the hardened skeptic typing this was surprised to hear such musings from a guy whose band is called “Rotting Christ.” τρελαίνεται!