Philip H. Anselmo & The Illegals are back with one of the most extreme albums you’ll hear in a long time. Choosing Mental Illness as a Virtue is the band’s sophomore effort, and definitely one to be listened loud. Released on January 26 2018, it is a collection of relentlessly vicious tracks, full of churning guitars, growling vocals and aggressive lyrics. With song titles such as “Little Fucking Heroes”, “Finger Me” and a disturbing album cover, there’s not much room for subtlety here.

The new album represented a change in the way The Illegals collaborate. After several lineup changes, new guitarist Mike DeLeon joined the band, and during the writing sessions, while directed by Phil, all members were able to add a lot of input to the compositions and arrangement. Differently from first album Walk Through Exits Only, the new register sounds more like a group effort, where all members are allowed to shine. Sonic Perspectives contributor Rodrigo Altaf spoke with Mike DeLeon at a time when he was just finishing to take care of his newborn son, and he explained a few aspects of the band, his involvement in the album and a few other issues.

First of all, congratulations on your new baby boy, and sorry to interrupt your time with him!

That’s so cool! Let’s talk about the new release “Choosing Mental Illness as a Virtue”. It sounds absolutely killer – one of the heaviest things I’ve heard in a long time. After listening to it,honestly I had to put on something lighter, because it’s so ferocious and so engaging!

We’re super proud of it, getting ready to take it on the road and play it for everybody! I’m glad you liked it. It is really really brutal, and like a breath of fresh air – there hasn’t been anything as extreme as that is in a little while. Of course there’s been some good albums out there, but this one is definitely original and young, and still very brutal and fresh.

Did you join the band before the writing sessions for this album, or afterwards?

I came into the band halfway through the sessions. About five songs were already written, and they had Blue (Jose Manuel “Blue” Gonzalez, drums), Philip and Stephen (Stephen “Schteve” Taylor, guitar). They were still sketches of the songs, and when I came in I learned them, we put them together and I collaborated with the other five from the beginning. It was a very organic process, we were all writing and got to add our flavor to the album.

One of my questions was if you were free to come up with material for this release or if you were directed by Phil, but it seems to have been a collaborative effort, right?

It was indeed! We all got to throw our ideas out there, and Phillip would listen to everything and take this or that riff and make it better or more appropriate for the songs. The end product is great, and it was definitely a group effort on all ends. Everybody got to add their flavor to the whole album. There are three guitars on all tracks, so everybody got to put their own spin on everything, and yet it’s still very focused and very tight.

The album title is quite interesting – where did it come from?

That’s more a question for Phil, but from my understanding is an open mind for what’s going on in today’s world and society: everybody is on their own page and not caring about what each other. To me it sounds like a summary of everything that’s wrong with people’s mindsets today, and it’s about different perspectives of being crazy – all crammed up into one album.

The lyrics in this album are also very angry How do you think Phil summons so much bitterness to write such aggressive lyrics? 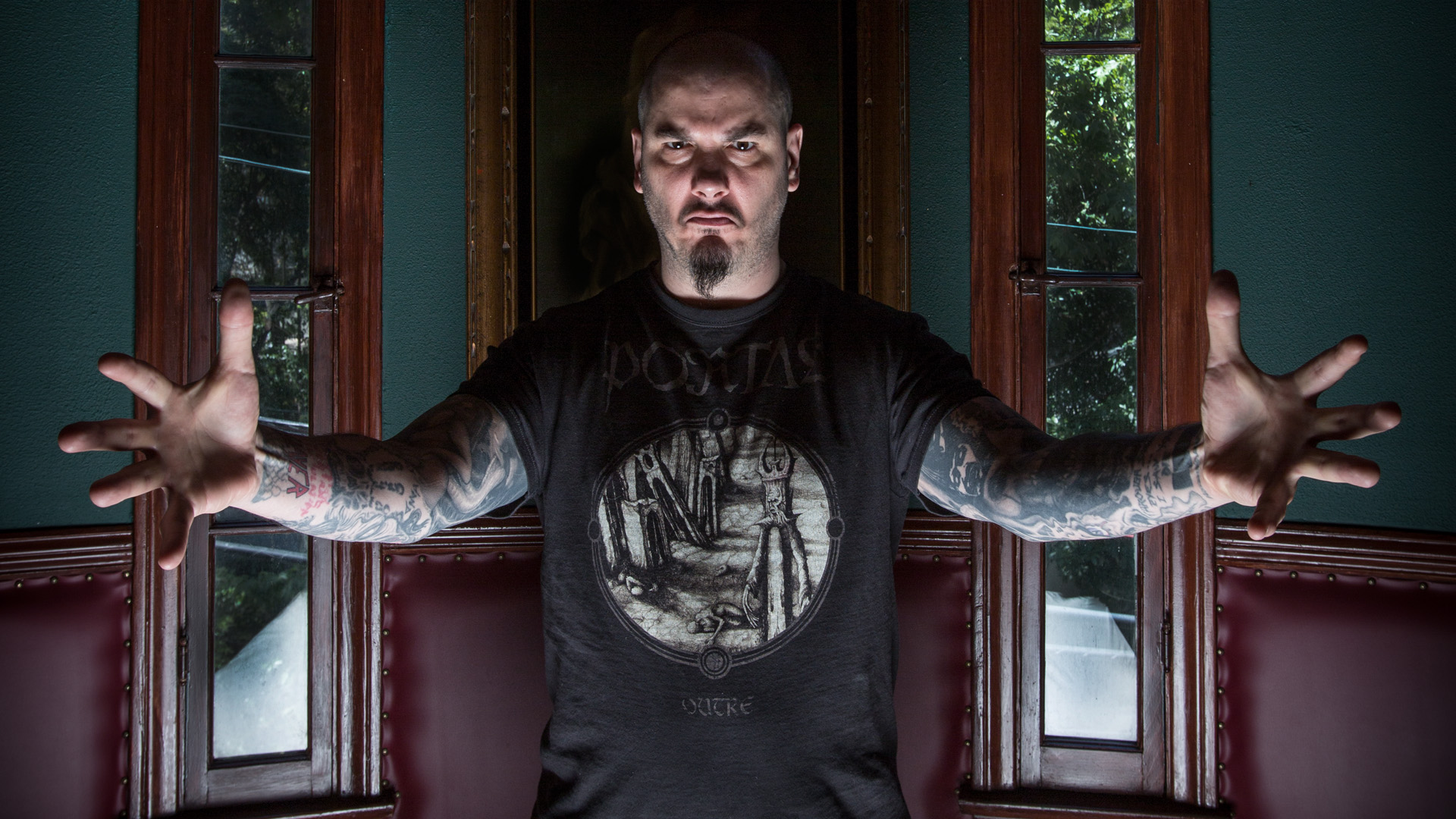 He’s still very angry, there’s still tons of emotion in him and he’s laying it all on the line, man. Phil was very open to us reading the lyrics as he was writing them, changing a word here and there… each individual song is a whole different subject but they all tie in very well. He’s coming from within and still finding that fire and that anger – twenty something years later, he’s still as pissed off as ever, and you’ll hear it on the new album. He leaves it open for the fans to figure out what he’s talking about. Our job was to match this inner fury with our sound and make it sound really tight, and it does!

Speaking of the riffs and the guitar work on the album, are there any particular bands that inspired you to compose them? I hear some old school Machine Head, Slayer, and even Voivod on a track or two.

You are also in a couple of other bands – Being Killed and Flesh Hoarder. Is it your plan to carry on with them as well while you’ll be touring with The Illegals?

I still play with a couple of acts in the Texas death metal scene. Being Killed was just a project that never got to be fully in place. I see my name out there always in connection with that band, but nothing was ever recorded by me related to that one. I’m carrying on with Flesh Hoarder and my other band Disfigured which started about twenty years ago. We’re still playing shows, and still active in the scene. Flesh Hoarder will have a new album in May, and for me it’s all about keeping busy, keeping my hands nice and tight to play this kind of style.

What are the touring plans to promote Choosing Mental Illness as a Virtue?

In the next couple of weeks we’ll announce the tour dates, and in terms of timeframe it looks like it’s going to be most of May and June. We’ll hit mostly North America with King Parrot, and it’s definitely going to be a wild show which we promise will be incredibly brutal. It will be The Illegals return to the road after about four years, so we’re all fired up to be on the road and to play these new songs! I can’t wait to get into people’s faces and grind down those songs!

I’m curious about the album cover – it’s a bunch of unsettling images, which seem to match perfectly the mission statement of the album.

Those photos were put together by Phil and his wife Kate, and I agree with you that the cover fits great with the music. They came from certain books that they owned. There’s one particular picture of a little boy who looks like he has a couple of black eyes – I know they talked to this boy and got his ok to be featured on the cover. When we were shown the end result of the collage it made perfect sense! It’s meant to give you that eerie feeling about mental illness and crazyness.

Thank you for your time Mike, and I hope to see you guys on the road very soon!

The pleasure is all mine Rodrigo! I certainly hope we cross paths in the next few months. Soon the tour dates will be announced – you can find them on our Facebook page. Let’s talk soon! 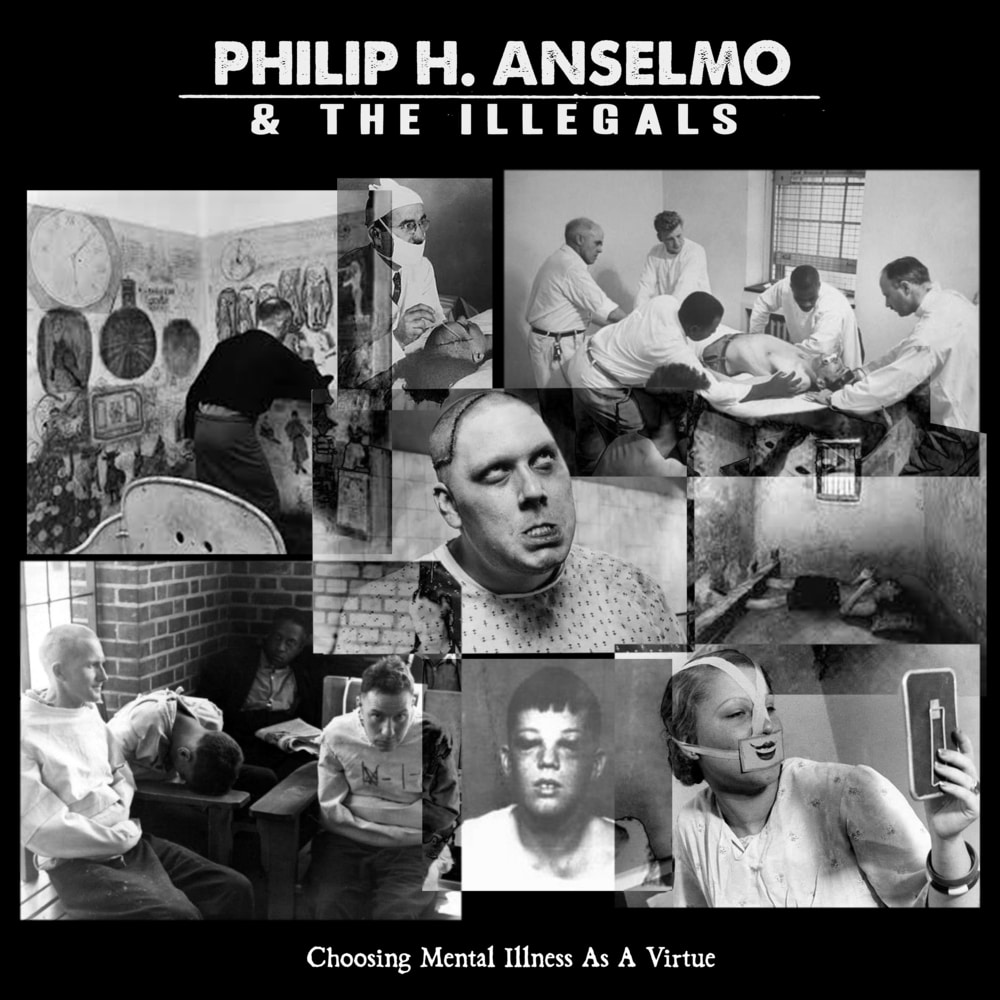 Choosing Mental Illness As A Virtue is out now on CD, vinyl, and digital formats in North America via Housecore Records. Order bundles are currently available via the Housecore Store here, you can stream Choosing Mental Illness As A Virtue at this location and view the band’s previously released “Finger Me” performance video, courtesy of Revolver Magazine, at this location.