The four-piece glam rocker of Luke Spiller [vocals], Adam Slack [guitar], Jed Elliott [bass], and Gethin Davies [drums]are delivering a supercharged album to the fans during this difficult time of the pandemic. What started as an EP blossomed into a full album full of gritty, diverse songs inspired by the blues and UK 70s rock – a wicked musical brew! Songs like “All Dressed Up” capture the true spirit and essence of the band while “Wild Child” and “Burn it Down” showcase the band’s hard edge sound. Authentic and fun songs that get to the heart of what this great band is all about.

Adam‘s thunderous fretwork raises the bar on “Strange Days“ with a wall of distortion as Luke‘s vocals pierce through the music helping the lyrics and melodies breathe. Jed provides the incendiary roaring bass, and Gethin gives us his monstrous percussive and stylistic playing.

Correspondent Robert Cavuoto spoke with guitarist and songwriter Adam Slack to talk about the importance of creating this album for the fans, how the band developed their unique sound, and to share some key insights into creating the songs with the guest artists who appear on them! 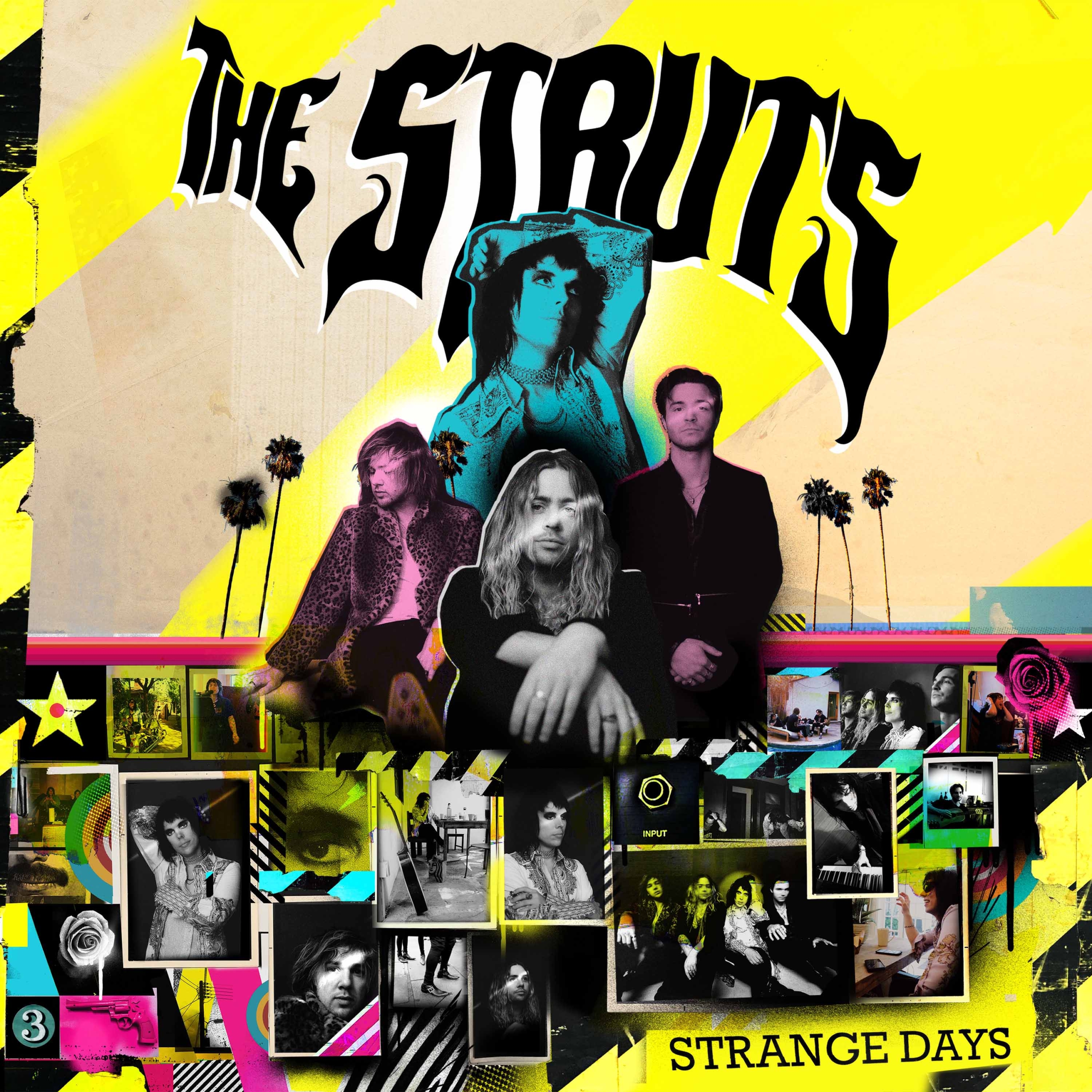 Luke mentioned that you recorded “Strange Days” in ten days during the lockdown on the intro to one of the songs. Does the band thrive on the stress and pressure of those types of deadlines?

For five years, we hadn’t stopped touring and recording at the same time. This time, the plan was to record an EP at Jon Levine‘s [producer]home studio for ten days during the pandemic. We all tested negative for COVID, so then we quarantine ourselves. By the sixth day, we had written nine songs! We couldn’t believe it! I think with the break from touring; all this creativity just came out of us. Everything was written and recorded in ten days. In the past, when we were songwriting, we would change parts and make revisions because we thought something wasn’t good enough. Because of this timeframe, we were like, its perfect and we like it! We weren’t thinking about writing hits or what the record label would like, or what management liked. We just thought about what the fans would like, and that felt right to us. They are really good songs!

All your songs flamboyantly dance on the edge of rock and pop. Did you have a specific vision for The Struts’ sound, or did that sound happen naturally?

The band started with just the two of us, and we were both influenced by 70s glam like Slade, T. Rex, and Mott the Hoople. We were still a two-some when we wrote and recorded some of the songs for the first album like “Sexy Money,” “Roll Up,” and “Black Swan.” The producers listened to our influences and helped us create our sound ten years ago. They gave us the blueprint of what The Struts really were. From then, it has been our sound, which is awesome. We’ve always liked good melodies and good choruses. I love pop music, I love rock music, and I like catchy songs. I grew up on The Beatles, Oasis, and Green Day from when I was 13 years old. That’s what got me into music in the first place. It’s what we always wanted to do.

Another band that did that extremely well was Sweet. They could go from “Ballroom Blitz,” which was heavy for the time, to “Fox on the Run,” which was disco. Did they influence you?

Oh, 100%! We all love Sweet and listen to them while in the studio. I loved the flamboyance of it, and I’m a big fan. We did a cover of “Ballroom Blitz” for a film, The Edge of Seventeen. I’m sure you can find it on YouTube.

What was it about Luke’s voice that made you know he was the right singer for a new band?

I remember the first time we met when he came to Derby from Devon, and we just hung out and started writing songs straight away. I can sing, but I have a crappy vocal range. I asked him if he could sing “Far Far Away” by Slade as Noddy Holder‘s voice is huge? I started playing it on the guitar, and Luke sang the chorus, and I thought he’s the one! [laughing]This guy can fucking sing! 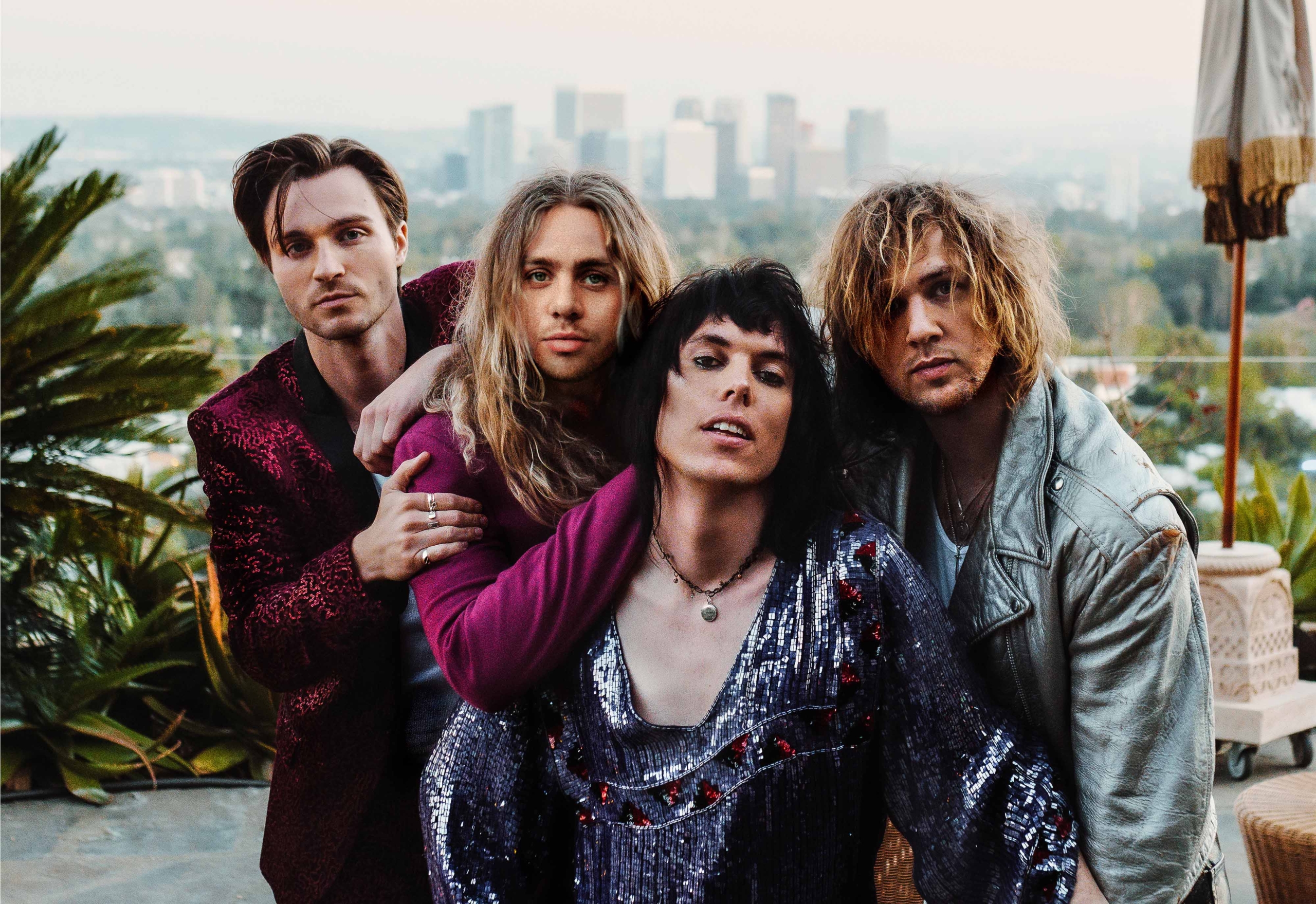 On all of your albums, including this one, there is always a good mix of rockers and ballads, which do you prefer to write?

Oh, good question. One of my favorite songs is “Merry Go Round,” which is a ballad. But I think more of the rocky ones — the ones with more guitar and less piano. I like energetic songs, I guess!

Let’s talk about a few of the songs on the new album. What can you tell me about my favorite song, “All Dressed Up?”

That’s one of my favorites as well. I had the riff that is in the chorus; it’s just that you can’t really hear it now. It was like “20th Century Boy” meets “Get it On” and I ripped it off [laughing]. I also had an idea for the chorus melody which I came up with it in the studio. Luke had all these lyrics about his Harley Davidson motorcycle as if he was singing to his motorbike. I think it was Jon‘s idea to write a song about it. I think it’s the most glam song on the album and almost like Slade/70s/UK glam. We started jamming, and I came up with the riff for the verse, and Luke started singing the words he had with the melody. Everything came together so quickly, but it started with that riff in the chorus. While the band was jamming, I went into the solo and thought, cool, that’s done. We did one more chorus to completely finish it. [Laughing]

I also liked “Cool” with its slinky blues undertone and you going off at the end with a tasteful 70 influenced guitar solo. What was the influence for that song?

We needed a song like “Dance Little Sister Dance” by The Stones. I was sitting with the acoustic guitar in the mornings, and I came up with the riff. Luke had a song with the melody already written but for a completely different kind of song. He just started to sing his song and the first verse was the first take! We all started jamming, and the entire song was one take. It was very self-indulgent, and I loved it. Looking back now that it’s done, I wish I could go back and change something guitar-wise [laughing]. I was like, “Crap; I could have done that better!” It has a vibe which I like, and that’s cool. 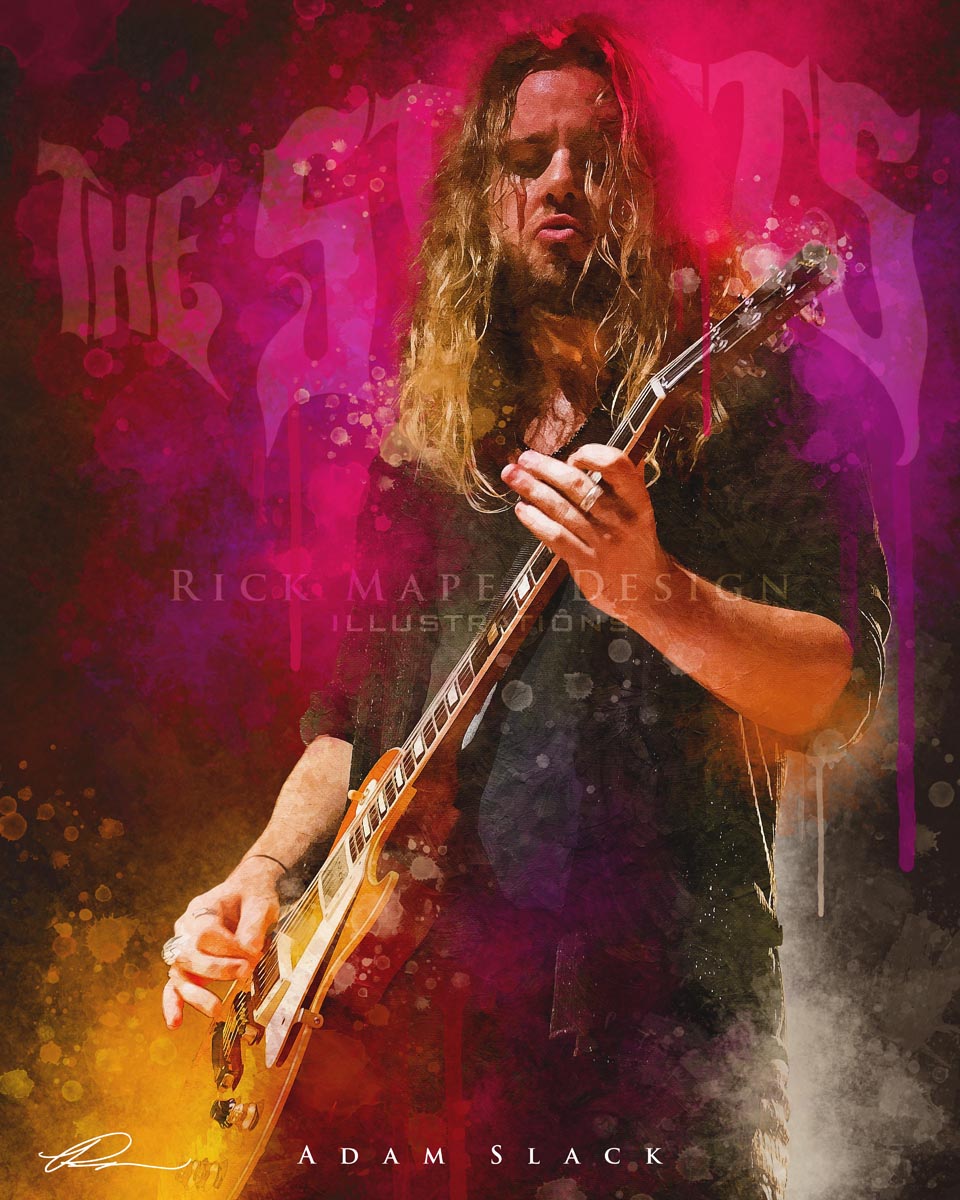 KISS is my favorite band, and Destroyer was the first album I ever purchased. It was great to hear your version of “Do You Love Me” as you certainly made it your own. Tell me about the selection of that song and if any members of KISS were asked to play on it?

I think we were trying to get one of the guys from KISS to play on the song; I can’t remember which one as somehow I had a contact for one of them. Phil Collen‘s first band, Girl, covered that song, and we wanted to get Phil and Joe Elliott to play on it, but they wanted to do an original song. We all love the song, and I think it sounds huge. We didn’t cover a well know KISS song because we wanted a song that not everyone knows. It would give it a new audience. Everyone has done covers of all their big songs.

Joe Elliot and Phil Collen both performed on “I Hate How Much I Want You.” Did you have to give them direction on their performance, or did you just let them do their own thing?

Like all the songs we sent over to the artists, we let them do what they wanted. We loved what they did. It was brilliant. There was no push back or anything. We pretty much knew what we were going to get from the people we sent the songs to. You know what Tom Morello is going to give you when you ask him to play something. You know what Joe and Phil are going to give you and the same with Robbie Williams. They are all great and added their own unique style to the songs. We just told them to have at it. That was the first song we wrote, but it was half-written when we went into the studio. 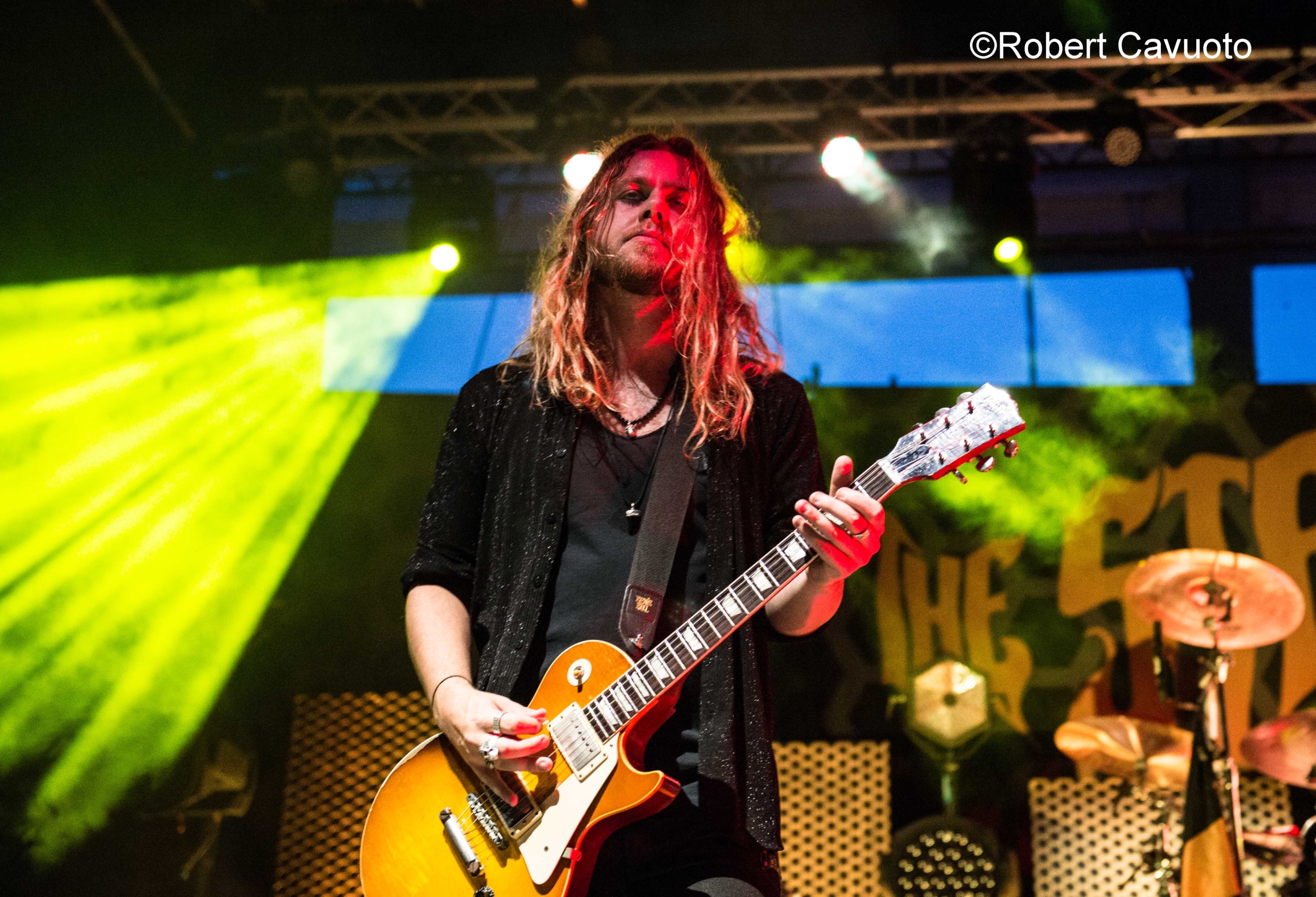 I saw the band live in Pennsylvania last summer and was impressed by your playing. You carried all the guitar work seamlessly and provided all the nuances which help maintain the song’s integrity. Is there a lot of work to make your songs work live?

It’s hard. What was cool about this album was that it was recorded purposely not to have that many guitar parts. In the past, Butch Walker and I used to call it “guitarmageddon” where we would have five or six-layered guitar parts. When I had play it live, I was like, “How the fuck am I going to play this?” [Laughing]. It helps that Luke plays more piano live. I like when I go for a solo, I have the back-up of a mid-range piano to fill the gap where the rhythm guitar would be. I also have a new pedal board, which also has helped. Before, I was tap-dancing on my pedals, and now I just push one button. The guitar parts are pre-programmed, so when I push the button, it does it all for me. As a fan of my own band, I want to play the parts that the fans want to hear the most. I have to play the meat and potatoes guitar parts, and then when I go to the solos, the piano and pedal board help.

You landed a Mercedes Benz TV commercial with the song, “It Could Have Been Me,” how did that come about?

I just got a call from our manager saying they wanted to use it. It has been used in so many things that we now say it’s the song that keeps giving! [Laughing] I think it comes down to the lyrics, which I think are great, and it’s a very relatable song. It’s a feel-good song, and I guess it is why it is used so often. I think someone, somehow, somewhere liked it and wanted to use it for the commercial. I have seen it online but haven’t seen it on the Telly, and I’m looking forward to seeing it when it pops on.

Was there any consideration to holding off on releasing this album until you could tour to support it?

It’s been a while since our last album; two years this October, and who knows when we can tour again. The original idea was that this is for the fans because we are not going to be touring. We wanted to quench their thirst. We had so much touring planned this year, which we had to cancel, so this album is like saying we’re sorry, and here is something you can listen to in the meantime.