We’ve encountered this spaceship before, almost exactly two revolutions around the sun in the past.  The space-guys have been on individual missions. But now, We Came From Space has returned to earth with a shiny, new EP called “Reasons in the Rhyme.”  And this ground control is glad to welcome them home.

Okay, enough of the hokey stuff.  This is the third recorded production of We Came From Space, and it is outstanding.  Just three tracks, clocking in at around 20-and-a-half minutes, but showing off the remarkable chops of these Pittsburgh guys.  “Reasons in the Rhyme” is a delight, from first to last notes.

Let’s get one thing out of the way. Singer and keyboardist Bill Hubauer is the big name in the group due to his work with the Neal Morse Band.  And one can pick out sections that are reminiscent of the NMB. But We Came From Space is not Bill and the Boys. Hubauer, guitarist and singer Dave Buzard and bassist/vocalist Dave Hawk started hanging in junior high, listening to music and learning licks together. Tim Malone has been the drummer for about five years now. These guys know each other well, making for a tight, cohesive group where everyone has input and a chance to shine – and shine they do.

Things get rolling with “Façade,” which enters with a gentle piano riff that is quickly overtaken by the sounds of the spaceship taking off (again). A thumping rhythm line under-girds a bit more dynamic piano lead (a la Genesis’ “Abacab”) before Hubauer’s recognizable tones propel the story forward.  His voice betrays the fear that lies beneath the smiling veneer – the façade – that most of us show to the world. It might even be true of some very talented musicians as well, I’m guessing.

A later organ break has the rhythmic feel of “Point of Know Return” by Kansas.  One can also discern a bit of Styx. But those are just touches, reminders of what Buzard, Hawk, and Hubauer listened to when they were at Clarion-Limestone Jr./Sr. High School back around 1980. This music belongs to the grown-ups of We Came From Space (albeit with some youthful exuberance). 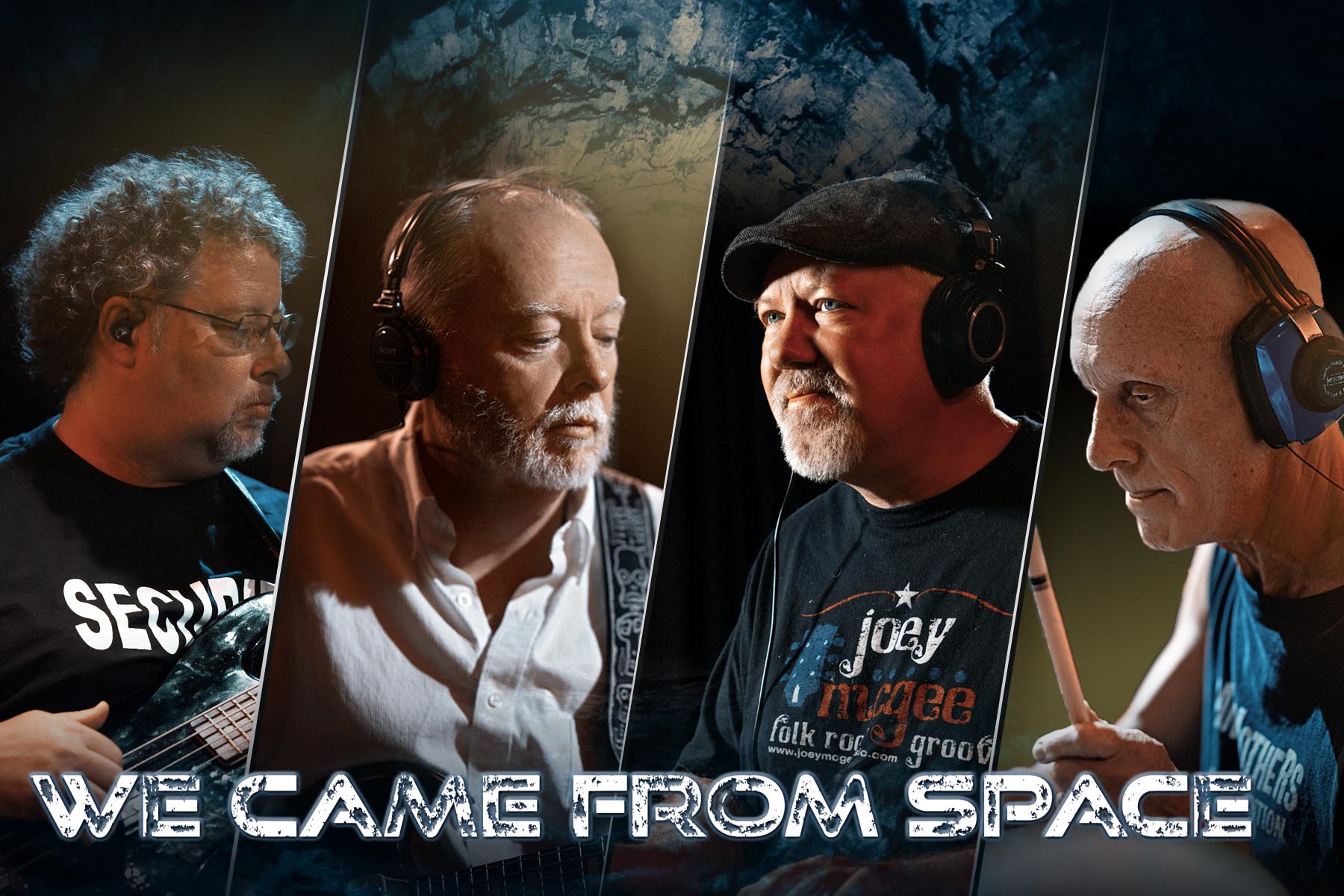 As the “Façade” finishes, there’s just a beat—nearly a segue, really–before we go on to the next track. “Seize the Day” is the centerpiece for the EP – not just because it’s the middle song, and not just because it’s the longest at over nine minutes.  This one grabs the heart and spirit (and sets the toes tapping) in a 6/8 waltz. Lyrically – and really, ironically, since this one was written a while back – this is a theme for the pandemic, when it becomes all too easy to just sit around and do nothing.

“Is your final ledger
Filled to the edge of the earth

Talents and treasure
Are poor ways to measure your worth

Each wasted emotion
Is a drop in the ocean they say

You swore your devotion
But go through the motions each day 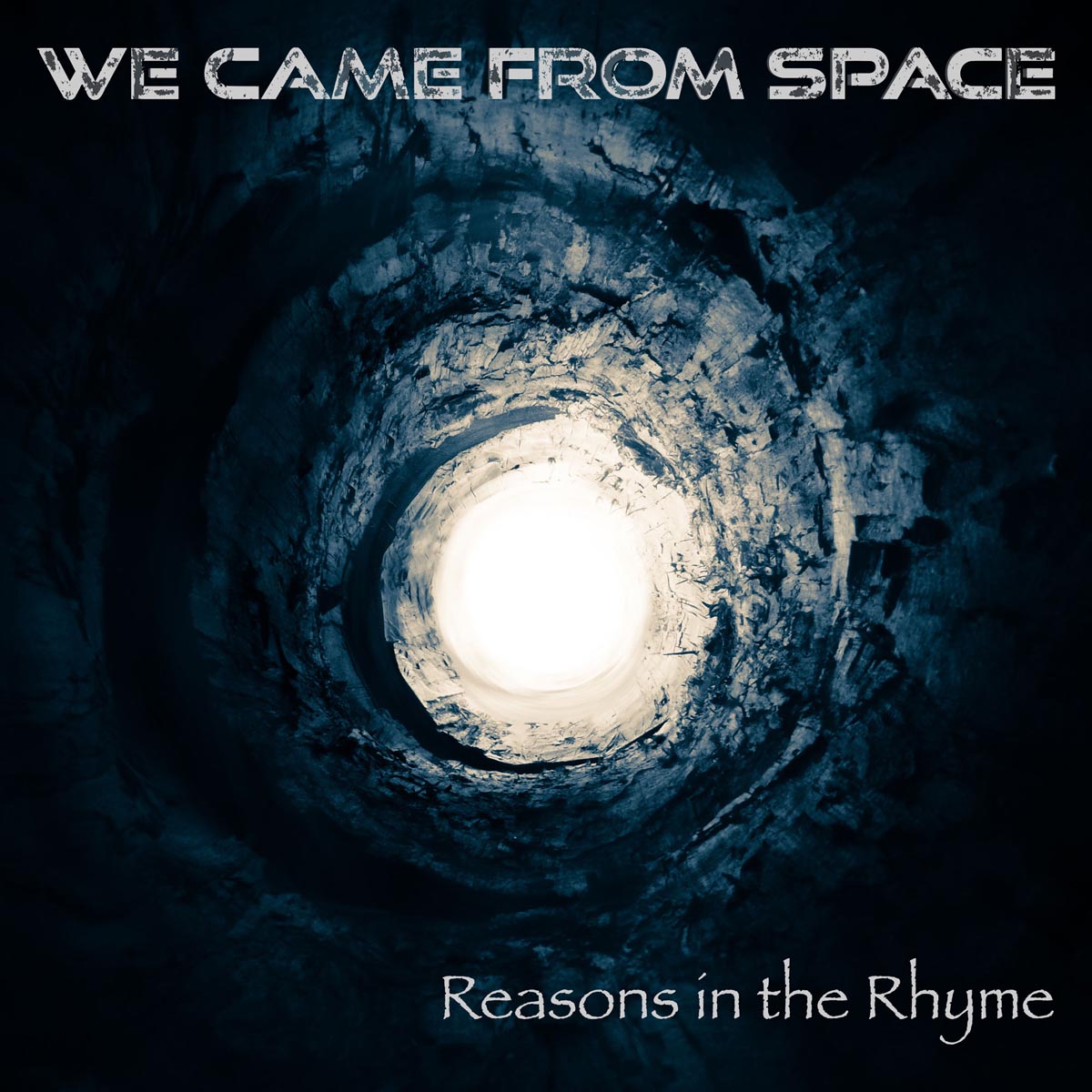 “Reasons In The Rhyme” EP Artwork

Musically, Hubauer’s jazzy keyboards and vocals drive the song, but guitarist Buzard has (alternately) some very tasty and very powerful fills. Dave Hawk’s bass gets a chance to come out front. And drummer Malone propels everything with an exquisite yet punchy performance. And about six minutes in, the vocals—harmony and counterpoint—really raise the emotional quotient.  One could call “Seize the Day” a mini-epic (I just did) and be right on point. This is one great song.

“Reasons in the Rhyme” concludes with “Take You for the Ride (Phone Booth), and this is where Dave Buzard steps out. It’s a rocker, a Buzard specialty as he plays in a variety of bar bands throughout the Pittsburgh area. This one could be Styx in a melding of “Lorelei” and “Miss America.”  Dave B. also takes over the lead vocals (might as well—he wrote the lyrics).  It has a bit of a softer break in the middle (with Hubauer grabbing the mic) before roaring back and on to the conclusion.  We’ve been taken for a ride, alright, and it’s been a load of fun.

I really liked the previous We Came From Space album, “While You Were Away.”  “Reasons in the Rhyme” is better.  The group has grown in the two years separating the two. They’re even more confident in their own skin.  They are more cohesive, more compelling.  If there’s a disappointment, it’s that the EP is just three songs.  But the band promises more music is coming in the not too distant future.  In the meantime, before our orb rotates one more time, pick this one up and let your spirit and mind soar to the cosmos.

Yeah, I got hokey again…

“Reasons in the Rhyme” Track Listing