For a number of years, the Athens, Georgia-based Theocracy had a Christmas gift for fans—a song for the season. These freebies—yep, they didn’t cost the listener a dime—ranged from the whimsical (Rudolph vs. Frosty) to the traditional (Little Drummer Boy) to contemplative (Night of Silence).

The last one came out in 2014…and then there was a silent night, or perhaps several silent seasons. No more Christmas goodies. Not even coal in the stocking.  Theocracy main man Matt Smith was on to other things.

But not even much of that.  “Ghost Ship”, which came out in October of 2016, was the last album of new music; fans had to satisfy themselves with that for more than three years. Smith hit some barriers, unable to overcome a frustrating writer’s block that dampened the creativity.

On December 19, Smith pulled back the curtain and unveiled a new song, a Christmas song, called “Snowglobe”.

And in case you were wondering, it is vintage Theocracy—a loving but insistent truth-be-told number about how far Christmas has gone from what it once was. Not just the spiritual distance from the Bethlehem manger, but how it has roared away from the peace and tranquility and calm of some distant past…it such a past ever really existed in the real world.

The lyrics speak of a little boy named Miles (named after bassist Jared Oldham’s infant son), who reaches up for a snowglobe on a shelf and watches it fall and shatter on the ground.  The people who dwell inside are set free to see this world they’ve heard about–but they’re in for a dark surprise. It ain’t what it’s cracked up to be. Traffic. Impatient and selfish people.  It’s nothing like life in the snowglobe at all.

“Welcome to our Black Friday.
Fight for your rightful place in line.
Right after me, myself and mine.
The joys of Christmastime.
Lipservice at the manger
While bearing gifts to the altar of avarice.
Joy to the jaded artifice
So this is Christmas?”

The little figures try to acclimate to the new world.  But it’s exhausting. There’s no meaning or dreaming. They’d just as soon get back to the snowglobe.  But how do you do it when that world has shattered? Or, in a broader sense, how do we get back to what Christmas was all about when all the forces of culture and society are working to break that dream and make sure it cannot be put back together again? 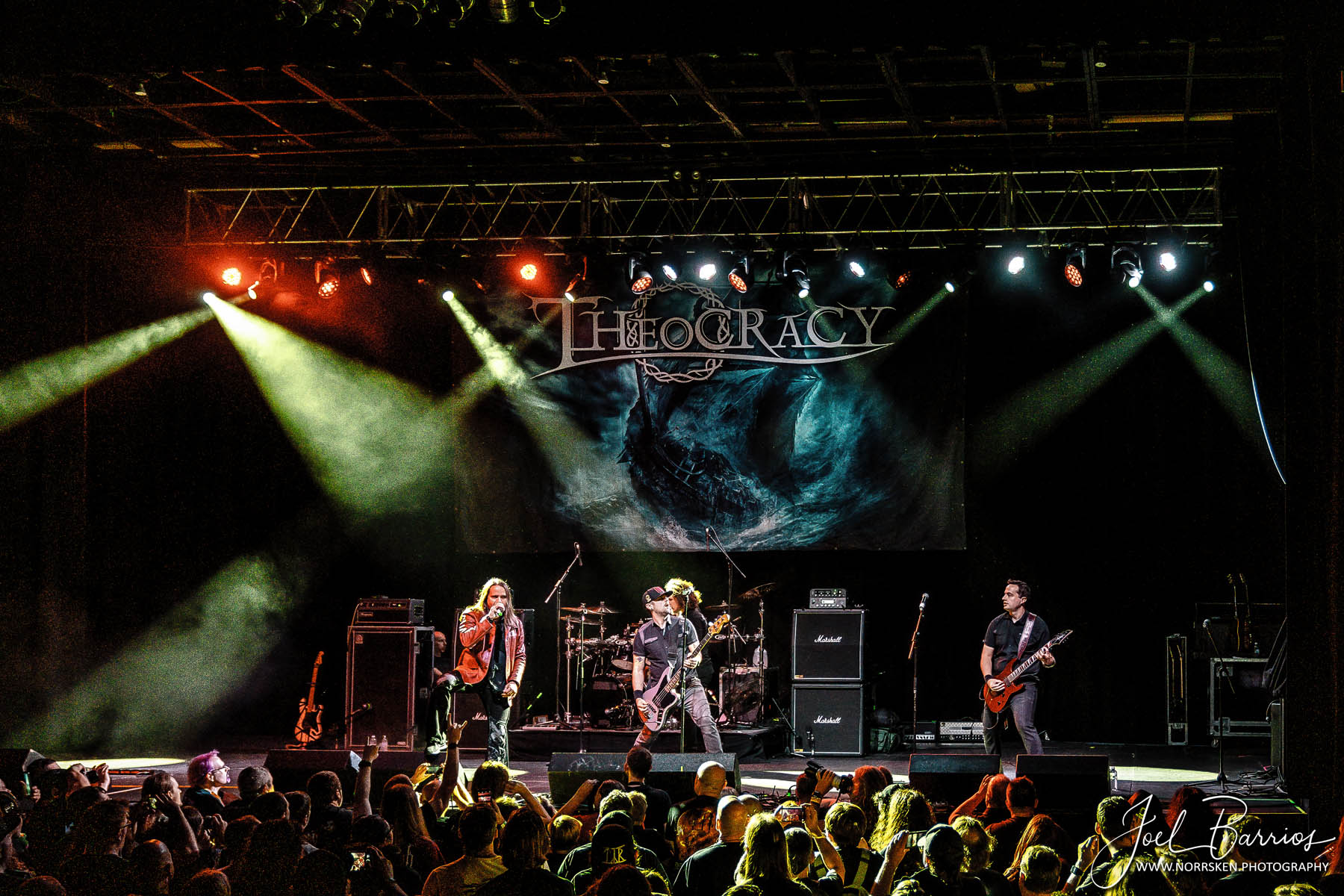 The music?  Theocracy-ish. It starts with a quiet section as Matt Smith sets the scene of the little boy Miles and the snowglobe. And when it falls and breaks, the band roars in with a melodic speed-metal performance that lasts for the bulk of the tune.

This is a band that believes in power choruses, epic chord progressions that make you throw your fist in the air, either out of anger or exuberance or both. And the chorus in “Snowglobe” is repeated several times—which means your arm is going to get tired by the end of it.

The final section slow things down a bit into more of a power ballad. There are two vocal lines in counterpoint. One sings about how everyone tries to bask in themselves around Christmastime, about what they got and what they gave. The other line yearns for just one silent night and wishes that the One who brought the star above Bethlehem would light your way. And on those last few words, the two parts come together. Perhaps that’s a bit of hope.  Maybe the “real world” and that of the snowglobe can find accommodation.  Maybe…

Theocracy is a very good band.  You can’t go from peaceful to speed to power ballad and not be talented and cohesive. But we must also tell the truth. Without Matt Smith, there is no Theocracy.  He writes the music and lyrics.  He arranges. He produces. And his voice is still the centerpiece, incredible in its range and power after more than 15 years of performance. Matt’s is a voice made for metal. Or Prog. Or singer-songwriter. Or whatever he’d like to do. His voice is a gift that he shares.

“Snowglobe” is out as a lyric video, which means there’s not a lot to it—a snowglobe on its side with snow falling and the lyrics flashing on the screen. But it doesn’t pretend to be more than it is, and that puts a premium on the music and words.  Oh, and the song should be available for download during Christmas week.  Free. Yes, no charge. You won’t find a better deal this holiday season.

It’s a musical “Snowglobe”, a world of its own that paints a grim picture of what is and a hopeful vision of what could be. It’s a gift from Theocracy to all of us.  Merry Christmas.