You might say the video for Stratospheerius’ “Impostor” had a long gestation period.  The song was released in October 2019, and it took 10 months for the video to be birthed.  But it was worth the wait—for several reasons.

First and foremost, the video brought new attention to Stratospheerius and its bow-man Joe Deninzon—much more than when the song came out.  And the video also brought home a powerful point:  that all of us are impostors, in one way or another.

Deninzon got the idea from talking with a friend about impostor syndrome.  Most people fear they’re fakes and will eventually be exposed.  But the real impostors are those with too much self-confidence, who often wield way too much power.

“It keeps you up at night
Flashes of deep insight
Let’s see how far they’ll bend
You fooled them once again.”

The visuals show just about every kind of mask (including the blue/green ones we wear in public because of the virus).  Some are mundane.  Some are frightening.  But all hide our true selves, faces and more, from an outside world that is potentially dangerous.  Interspersed with those images are shots of the band at play—quick cuts, sometimes psychedelic, sometimes cartoonish.

It’s unsettling, which is just what Joe Deninzon wants.

But for me, the music is what really grabbed me by the throat.  This band is GOOD!  Deninzon is front-man and violinist and lead singer.  He shreds the bow (probably literally) at times, and then gently plucks the strings in others.  Dynamic; that’s what Joe Deninzon is (and as befits my fellow Indiana University alum).

Bassist Paul Ranieri and guitarist Michelangelo Quirinale are fine compliments to the leader, gifted musicians both (and both new to the band). If there is a concern, it’s that this duo is pitted with sidemen and drummer who are better known. 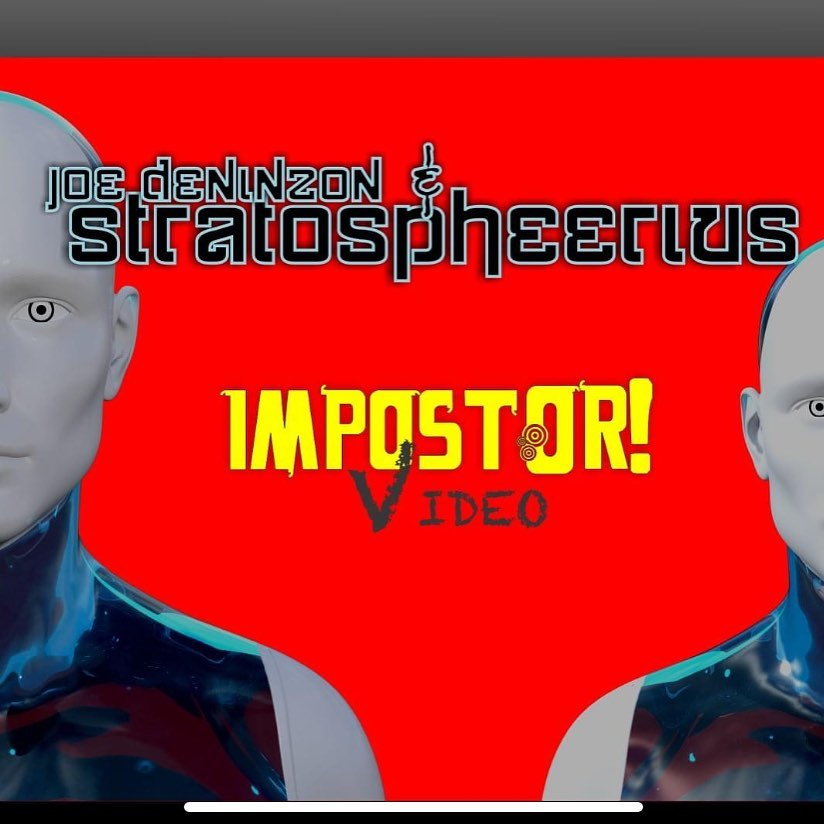 Jason Gianni is the drummer.  He played with Neal Morse at the start of the “Momentum” tour, and has also been associated with the Trans-Siberian Orchestra and the Broadway musical Rock of Ages.  Jason is excellent, as always.  Then there’s guitarist Randy McStine, who keeps building a resume of rock royalty—he’s scheduled to be the new guitarist for Big Big Train and recently came out with a highly regarded album in partnership with drummer Marco Minneman.  McStine shreds and duels with Deninzon in fine fashion.

Then there’s The Neal Morse Band keyboardist Bill Hubauer.  As usual, he looks placid—but at about 5 minutes into the song, he starts driving those keys in ways we’ve never seen from him before.  It’s one of the highlights of “Impostor.”

There’s a couple of other names we should mention. Rave Tesar, the keyboardist for Renaissance, handles the engineering.  And the ubiquitous (yeah, I used that word) Rich Mouser mixed and mastered.  One thing is for certain—Joe Deninzon went first class on this.

So what does the song sound like?  Well, it’s a bit different than previous Stratospheerius production, which leaned more toward Progressive-Jazz.  “Impostor” is much more Prog.  Think Kansas mixed with The Dixie Dregs (before they jettisoned the “Dixie) and a bit of Jean Luc Ponty along with some King Crimson.  In fact, with every listen, I pick out other influences.  And yet this is unique, catchy, powerful, urgent in its own way.  It is Joe Deninzon.

And it comes across as very honest, very upfront.  The song may be about impostors of one sort or another, but “Impostor” is no fake—it’s the real deal.

By the way, “Impostor” and a later release “Frame by Frame” are the first two songs of an upcoming album.  Another song is due to be released on September 12.