If you landed in this page without reading the first part of this article, you can do so by going here.

The second day (and first one to feature four bands), started out with THE AARON CLIFT EXPERIMENT. I must confess this band had flown completely under my radar, so I wanted to see why George had picked them up to be part of the festival ranks. Aaron Clift (a crazily tall guy, one of those who would make one feel like a dwarf) is the central figure, being the vocalist, keyboardist and main composer of the band’s music, and he sounds a lot like Echolyn’s Ray Weston (which is obviously a great thing). Their stock in trade is an intricate, subtle, and broad style of melodic compositions with raw passion at its core, songs with a classic rock nucleus embellished and augmented by progressive rock overtones. Drawing musical influences from the Gods of the genre (GENESIS, PINK FLOYD and RUSH came to mind) through inspiration and not pure imitation, these guys offered an exciting and very well executed performance, so it seems we can have Texas-style prog after all! Unquestionably a band worth listening to, I will make sure to pick up their second album “Outer Light, Inner Darkness” which was called “an impressive sophomore outing” by Prog Magazine, and “gorgeously emotive” by Progression Magazine amongst other raving reviews. 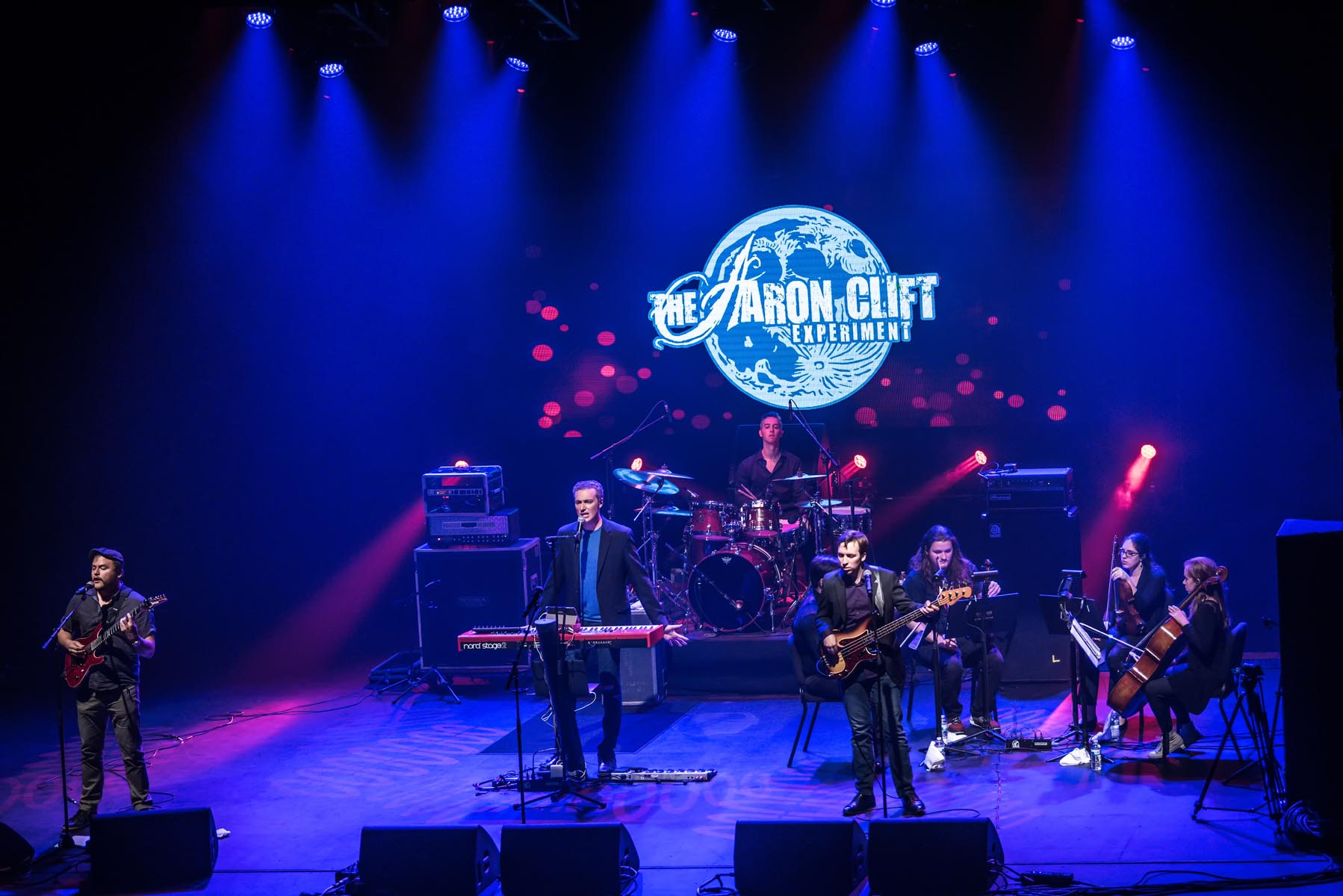 The Aaron Clift Experiment opening the second day of RoSfest 2017

UNIFIED PAST took the stage at 2:00 PM fronted by Phil Naro, best known in the music world as the mic-man for Billy Sheehan’s band, “Talas”. I first knew about him when I bought “Second Sound”, a wonderful album by the Canadian based band DRUCKFARBEN, and once again when discovered “Through The Turbulence”, a 2014 exceptional eclectic prog-rock record by the Venezuelan band BACKHAND (which I wholeheartedly recommended to anyone reading), where Phil was the lead singer. Despite the band’s history being traced back to 1990 and a band then called LABYRINTH, they have revitalized and practically have come across as a new entity, their music now bearing a taste of symphonic heavy metal but with a positive vibe like Yes and Glass Hammer, which can be bombastic and very complex at the same time. Guitarist Stephen Speelman’s bright and dynamic guitar tone excelled throughout their gutsy combination of heavy riffs, symphonic synths and confident rhythm section, at their best on the longest of tracks when the band breaks most strikingly into the arrangements with structural variations and acoustic interludes. They also achieved an extra point for respect in my book since they performed after replacing their keyboardist only a month prior to the event, instead of taking cancellation as the easy way out. Their set included material from their 2015 record “Shifting The Equilibrium” which depicts gorgeous artwork created by international fantasy artist Ed Unitsky, and would be a worthy addition to your ever-growing musical collection. 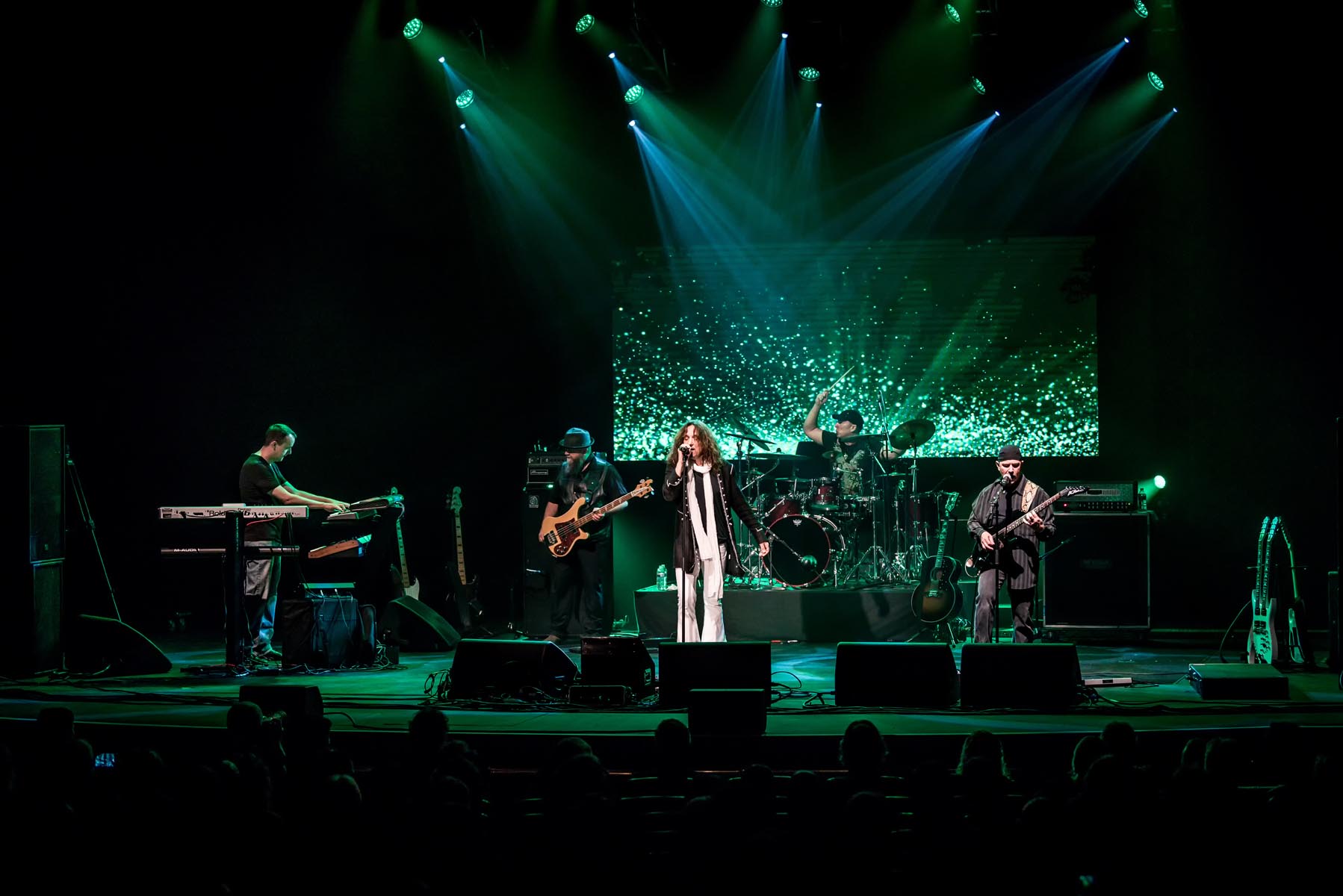 Unified Past playing at RoSfest 2017

A surprise VIP performance had been announced in the 5 PM time slot, and materialized in the form of UNIT D.B. a one-off live band made up by the combined forces of Mark Truey Trueack (vocals), Sean Timms (keyboards, vocals), Danny Lopresto (guitars, vocals), Brody Thomas Green (drums, vocals), and Steve Unruh (flute, violin). Basically, an amalgamation of UNITOPIA, SOUTHERN EMPIRE, RESISTOR and SAMURAI OF PROG. UNITOPIA were supposed to play the festival back in 2010, but sadly, they broke up before they could, hence this specific show was a kind of a long overdue apparition by the Aussies. I was impressed and really enjoyed their presentation, despite not being familiar with UNITOPIA’s back catalog or any of the other splinter bands. Gorgeous anthemic melodies which made a great contrast with the metallic edge of the previous show, Mark’s voice was warm and spot-on, and Steve Unruh added a myriad of soundscapes to the songs, playing strings, woodwinds and several other instruments. Provided in the form of flawless musical execution (after apparently only one actual rehearsal, which is additionally remarkable) their music had the ability to take you away somewhere else and at the end of the set soothingly bring you back to your seat. A pending schoolwork is now my necessity to explore further into the former history of these fine musicians while truly hoping they decide to put out a live recording of their set. 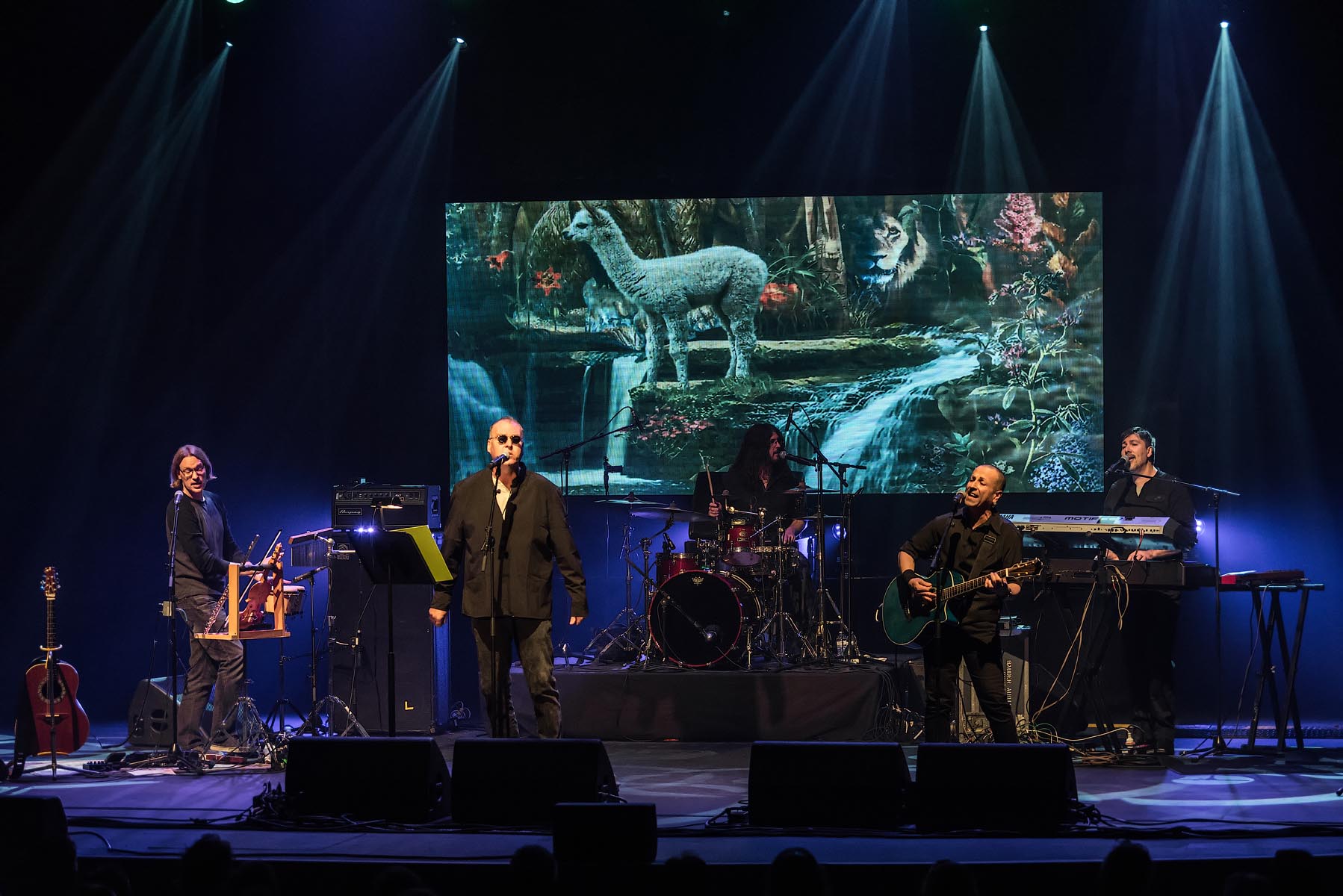 To close Saturday night, George had announced THE NEAL MORSE BAND as early as the last night of 2016. Neal and his band-mates released their latest album “The Similitude Of A Dream” this year, the second under the same band moniker and with the same formation of Eric Gillette (guitars) and Bill Hubauer (keyboards, vocals, sax and everything in between) alongside lifelong partners in crime Mike Portnoy (drums) and Randy George (bass), and the album really took the band to a whole new level and topped the progressive rock lists in many magazines worldwide. Being very familiar with Neal and Portnoy musical collaborations (Transatlantic, Flying Colors, etc.) and after beholding the band a couple of times during this very same tour, I knew their set would be a towering experience. I was surprised to note that due to the religious nature of the musical direction Neal has gone after he left Spock’s Beard, some considered him as the elephant in the room. Nonetheless, he had the largest crowd of the weekend by a fair margin, fact I can attest as I moved constantly up and down the stairs and aisles to get the best vantage points for my shots, so it seems the audience was unquestionably not bothered by the Christian message carried out by the music. Neal’s band presented the entire “The Similitude Of A Dream” album from start to finish with all the magnificent theatrics and splendid rear screen projections created by collaborator and visual artist Christian Rios, and once again they proved this band is no longer the sum of its parts opposed to Neal’s earlier solo tours, but a rock solid entity firing on all cylinders. Progressive, heartfelt, powerful, and rocking are some adjectives I could use to describe their show, with Neal showcasing real joy while unleashing his inner Peter Gabriel as he wore a variety of outfits and changed masks throughout the show to correlate with the different characters and events described throughout the album’s story; meanwhile his bandmates presented one of the most scorching and tightest performances of the event. 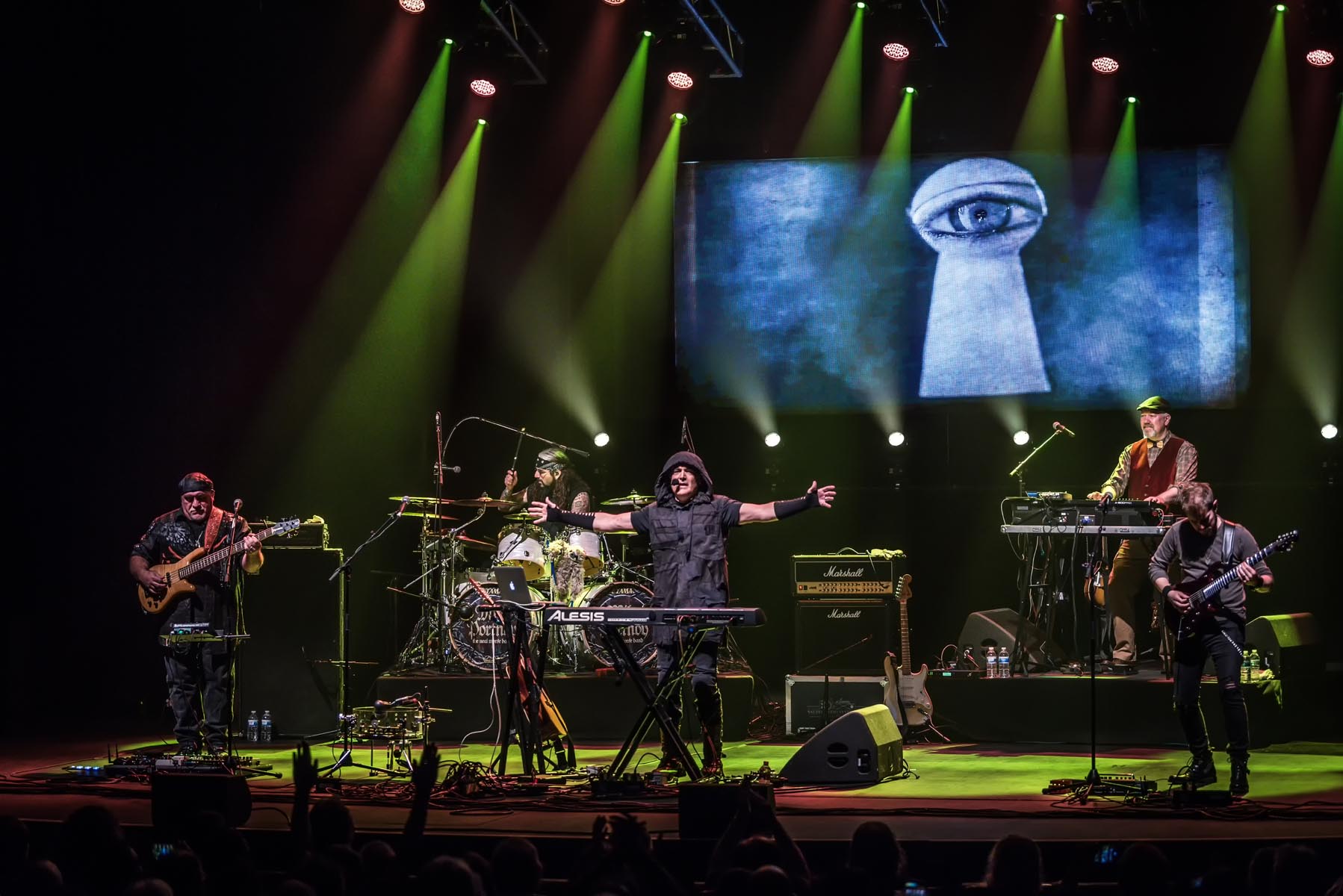 The Neal Morse Band closing the second night of RoSfest 2017

Their exemplary pristine and accurate spectacle encountered some hiccups, in the form of gear and practical issues, and by the end of the last song of the initial set, Morse’s computer went blank and died. While the techs were trying to figure out how to get his computer back on, he had to play the very end of the last song on acoustic guitar. Since they could not get off stage for the encores Neal said: “Well, anybody have any requests?” And somebody called out “We All Need Some Light” (A heart-touching ballad off the first Transatlantic album), so he played a little of that until the computer came back online… and then they closed out with “The Call” from their previous album “The Grand Experiment”. An overall fabulous performance (and one of the favorite sets for many I spoke with during the following days), paired with a real display of grace under pressure.

This article final part can be seen here. Below you can find the complete picture galleries for the second day.