A bucket list.  Things you want to do before you die.  For many of us who live and thrive on music, that list includes a chance to meet our favorite artists.  Or — hope against hope — maybe we could perform with them (lack of musical skills notwithstanding).  Most of us will never get the chance to play with, say, Neal Morse.

But before you envy him, know this: Mark Bradford’s bucket list is short and must be completed quickly.  He’s dying of prostate cancer.  The prognosis is in months, not years. This is not a downer story, though.  Not for Bradford.  Not for Morse. It shouldn’t be for you.

Let’s give things a bit of context by introducing you to Mark.  He lives in Denver, is married to Sharon, and he’s been a professional musician for 30 years.  He’s led church music operations, played in bands (mostly Christian), and cranked out numerous CD’s of religious parodies—think of Weird Al taking popular songs and switching the lyrics to Christian images.  Ironically, one of Mark’s chief competitors was Apologetix, a band featuring future Neal Morse instrumentalist/vocalist Bill Hubauer. A video of his “Bethlehemian Rhapsody” (a take-off on the Queen epic) features puppets and has more than 1-million views on YouTube.

Mark is a Prog fan, and he’s been a Prog fan, well, since Prog came to the fore in the ‘70s.  And he’s been a Neal Morse fan since 2004.  “That was when I first heard Spock’s Beard, and I just loved what I heard.  Of course, by that time, Neal had already left the band.  So I began to listen to his solo stuff.” Mark was smitten, if you will.  And the feelings gained strength when Mark realized that Neal was a devout Christian; they had even more in common.  What started as appreciation became serious hero-worship and a belief that Morse was doing things the right way: “For me, he is my example, he is my model for how to put my faith front and center in what I do—without shoving it in peoples’ faces.”

Mark will tell you that he has had a blessed life, one filled with love and faith and joy—and lots of music.  But the dark cloud appeared in August 2015.  He was diagnosed with inoperable and incurable prostate cancer.  The doctors tried hormone therapy, but it could only extend life.  It was just a matter of time until the curtain came down. Most of us would take such news and go curl up in a corner, waiting to die.  Mark became more active, more alive, stronger in his faith.  He wrote an uplifting blog about what he was going through, about what he expected, about how precious life had become.  He played his music.  He mentored young musicians. And in the summer of 2017, he talked about wanting to go to Morsefest.

One that seemed out of reach.  The Bradford family finances were tight due to a lack of income and big medical expenses.  But Mark is the first to admit that he gets by with a lot of help from friends.  The administrators of the Facebook Neal Morse Forum put together a GoFundMe effort to get the Bradfords to Morsefest.  It took only a few hours to reach the goal, and then some. And when he and Sharon went to Nashville in early September, they were greeted like long-lost cousins.  Everyone knew who they were.  Everyone welcomed them, reached out to see if they could help. 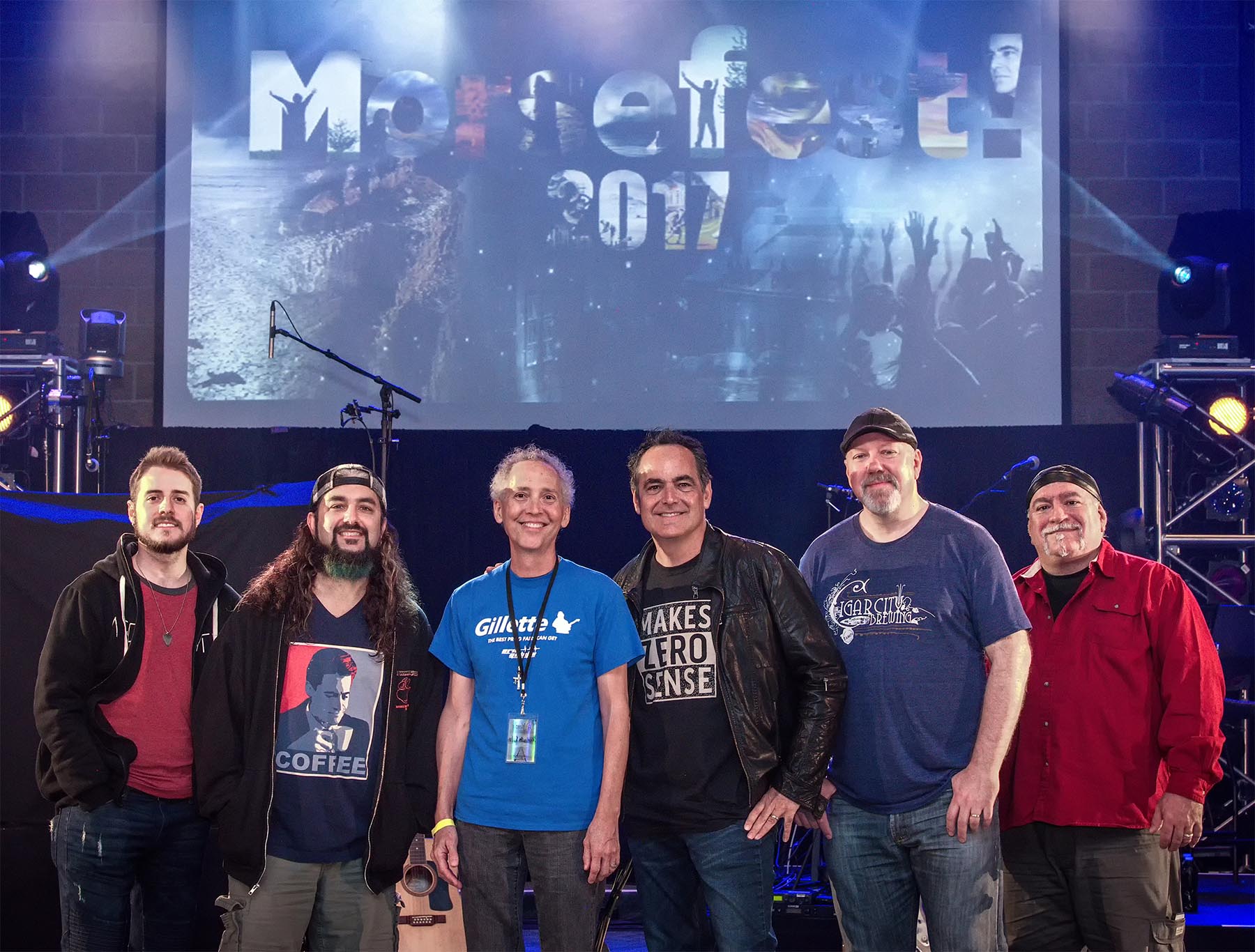 Neal Morse knew who they were, too.  He’d heard about Mark and his situation.  He wanted a chance to meet Mark, to talk and pray and share.  The two had met very briefly at a Morse VIP experience in 2011, but for Mark, this was the opportunity to get to know his hero.  Another blessing.  The two promised to stay in touch.  Mark went away walking on air.

Two weeks later, he went into hospice care.  No further cancer treatments.  Medical personnel would make him comfortable until the end—whenever that would come. Again, Mark took all this in stride, his faith carrying him above the fear and depression that most of us have when death is the subject.  But he also knew that he had but a short time to get done the things he wanted to accomplish.  To say goodbye to people.  To finish some musical projects. Even to plan and direct his own funeral.

Then Neal Morse came out with his Life & Times album and planned a big solo tour.  On the calendar: March 17, The Soiled Dove, Denver, Colorado.  The Neal Morse Band guitarist Eric Gillette would be the special guest. Mark Bradford would be there, come hell or high water, in sickness or in health.  He was pretty sure it would be the last time he’d see Neal in concert.

A few days before the Denver show, Mark emailed Neal: “Hey, let me know if you need a third vocal part for ‘Freedom Song.”  Mark was more than half serious but wasn’t sure how Neal would react.  The response was almost immediate.  “YES!  LET’S DO FREEDOM SONG!”  That’s Neal’s caps, not mine. The last item on the Bradford bucket list was about to be crossed off.  But Neal wasn’t done yet, adding additional songs for Mark’s vocals – “Flowers in a Vase” and “Wind at My Back.”  Needless to say, Mark didn’t turn any of them down.  If this was going to be the last public performance of Mark Bradford, he was doing it big.  And he was doing it with his musical hero.

So the night arrived.  Most of us would have butterflies in our stomachs, just at the thought of getting out there on stage with a Prog legend.  Mark wasn’t nervous; he’d done too many concerts, performed too many times, to be concerned about playing in front of people.  But the stomach part was an issue.  He’d lost a fair amount of weight and was feeling pretty sick. “I knew adrenaline would get me through it,” he says.  “But I was very nauseous through the whole show.”

That didn’t stop him from taking creative license.  On “Flowers in a Vase,” Mark improvised a harmony part toward the end.  “Neal looked over and smiled, like, ‘Yeah, man.’ That was really cool,” Mark remembers.

It was all cool.  Take a look at videos from the show, at Mark’s face as he’s on stage with Neal and Eric.  There is a joy and serenity that suffuses him, that gives life to a frail body that is breaking down. It’s something that touches all three performers and the audience.  It’s transcendent.

Morse never mentioned Mark’s cancer during the show.  Most people probably knew.  But Neal didn’t include Mark out of pity.  He was working with a fellow professional musician, giving him a chance to show his stuff.  It was a sign of respect.  And that made the bucket list item even sweeter.

“How many people get that kind of personal experience with their favorite rock star?” Not many.  But Mark Bradford did.  It’s a personal experience that lifts him and others up as his life winds down.  The last item on the bucket list is crossed off.  With a smile and a crescendo.