Some people are destined to change mankind. On April 15th, 2017, three years ago, the world lost one of them. The Johan Sebastian Bach of electric guitar, The Einstein of the six strings, the inimitable, the  groundbreaking, the guitarist’s guitarist, the Maestro: Allan Holdsworth left us, and with his departure we probably lost the greatest and most innovative guitarist to walk the Earth. And arguably, one of the most underrated visionaries of the instruments, one who will be acknowledged in the years to come, when his talent is finally understood by the masses.

Allan was an “original”. A man who touched thousands of hearts with his magnificent music. I believe the first album I ever heard him on was the debut album by Jon Hiseman’s Tempest, when his sound was more horn-like, raw and aggressive – several years before he developed what became his unmistakable trademark legato style. Some years later my dear friend Guericke De La Fuente played the Tony Williams Lifetime album for me and the Soft Machine‘s “Bundles”, both the same day. He used to nickname Allan “El Abusador”, which is the Spanish term equivalent to “The abuser”. He used to say Allan did not play his guitar, he abused of it. It was a rather simple way to put how bewildering, confusing, and disoriented Allan‘s trademark technique was. However, I don’t think there was ever a gap between Allan‘s and his guitars. His instrument was nothing else than an extension of his own mind, and that is exactly what made him so different, unparalleled and innovative. He led multitudes of guitar players and indeed players of all instruments into wildly new possibilities. As someone once said: “In order to be irreplaceable, one must always be different“. And Allan was not only different: he was unique. 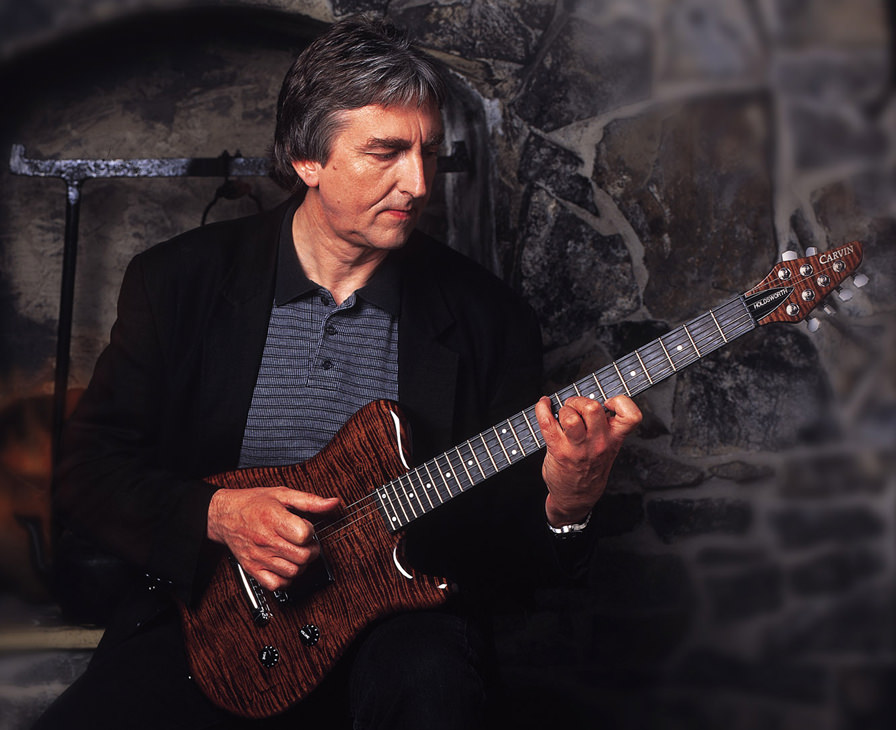 The two aforementioned albums changed forever my entire perspective about guitar playing. Then there was Enigmatic Ocean with Jean-Luc Ponty, which in my book has some of the most beautiful and brilliant guitar playing ever recorded. And then Gong, U.K., Bill Bruford… and countless more. Allan was the thread that ran through progressive rock and fusion and helped invent sounds and techniques that would forever change the path of artful music. He redefined the electric guitar in a way nobody has done since. His chord vocabulary and exquisitely sophisticated chord progressions were dazzling enough, to say nothing of his solo guitar work, in which he applied any variety of scale forms to create lines of complexity, unpredictability, and saxophone-like fluidity. His friend Frank Gambale once wrote: “I remember being inches away from his hands on the guitar and thinking to myself, what on Earth are you playing? I couldn’t even understand it even from that kind of proximity. It was as if an alien had landed from another planet.” 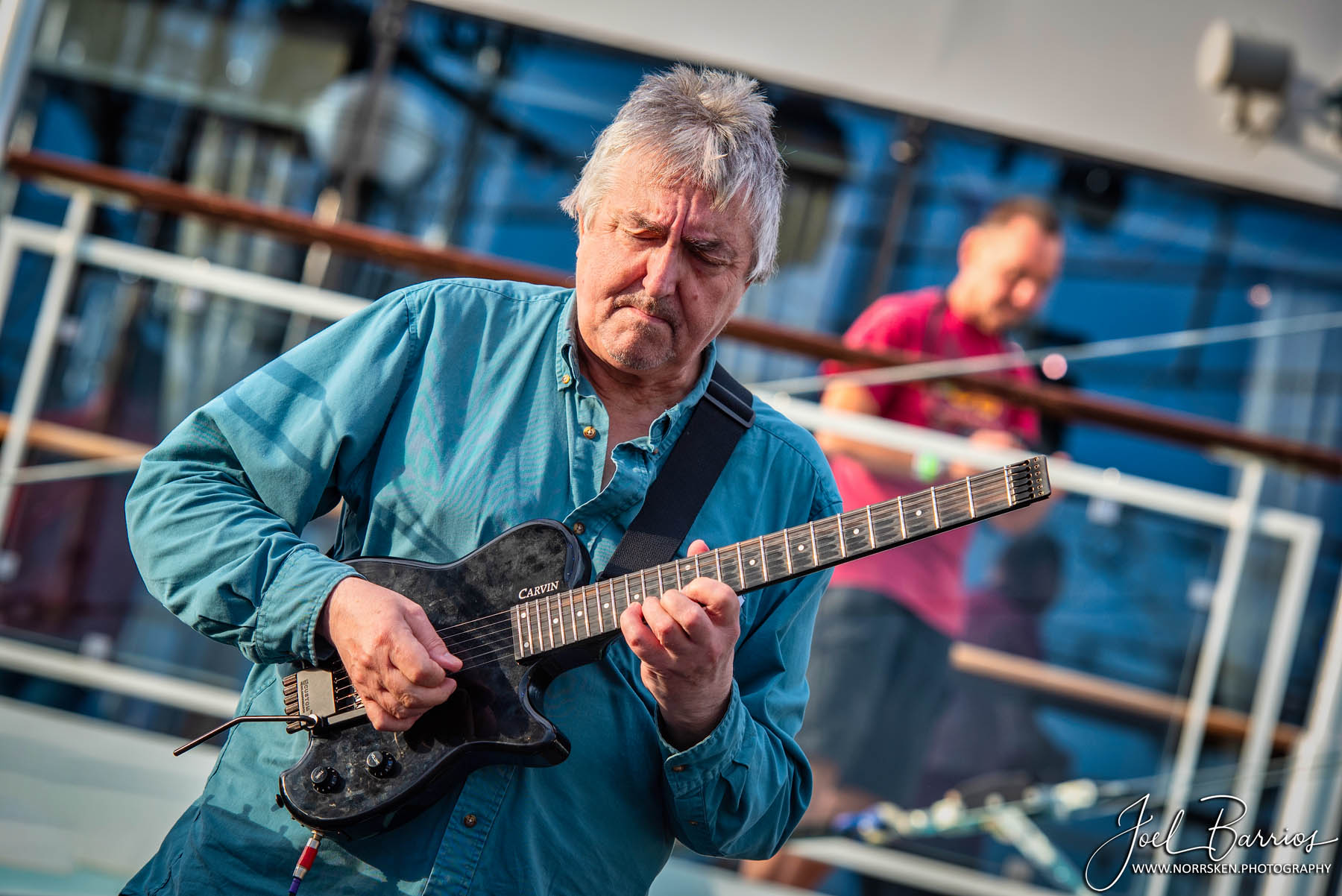 But Gambale is not the only one who hailed Allan as a true innovator of the six strings. When asked to pick his favorite guitarist, Steve Vai said: “I very rarely agree with the term ‘best guitar player’, it just seems so obscene to put something so subjective into a best category. But if I had to say there was one, I would pick Allan Holdsworth. He was unique in ways I don’t think have been discovered yet” He added: “Many musicians can be considered ahead of their time, but usually—they’re not,” he says. “They’re mainly ahead of everyone else at that time. For example, Jimi Hendrix wasn’t ahead of his time; he was perfect for his time and ahead of everyone else. Allan Holdsworth was definitely ahead of his time because it’s hard to realize how great he is—not many people actually understand. It takes time for us to catch up with those that are ahead of their time” 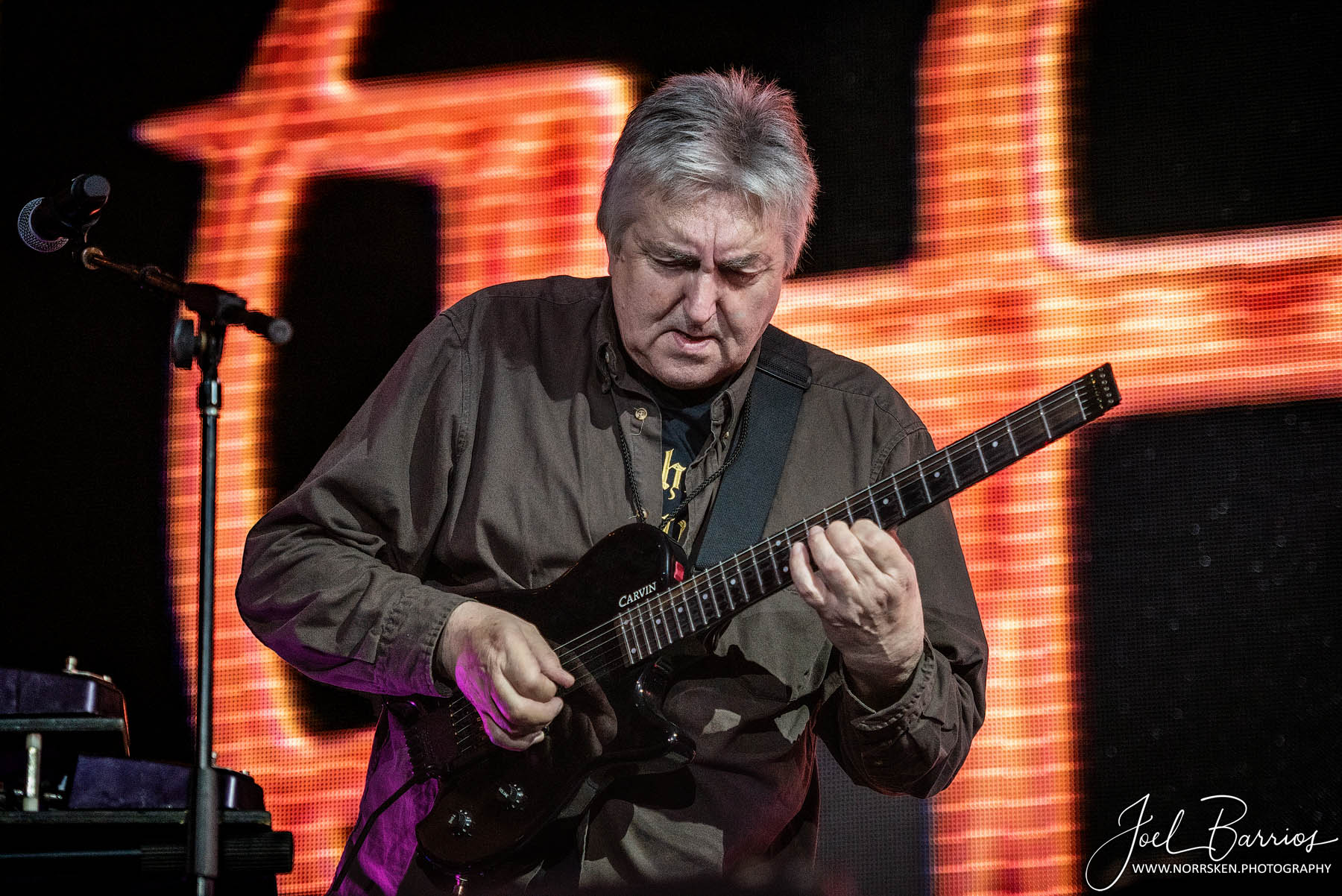 I met Allan back in 2015 during the Cruise to the Edge progressive rock cruise. We have a fun chat about music and Cuban cuisine sprinkled with a couple of beers, and he gave me one of his well-known rib cage-shattering hugs, an uncompromising embrace, as strong as talented his music was. I also remember how gently he patiently signed every single item brought to him by a long list of passengers formed immediately afterwards. A true testament to the greatness of a man whose astonishing technique, unbridled creativity, iridescent tone, dynamic touch, exquisite taste, and expansive melodic strategies have absolutely changed guitar-craft for any player aspiring beyond his or her first barre chord.

Allan‘s longtime friend, manager, founder of Moonjune Records and musical connoisseur to the utmost degree Leonardo Pavkovic said about Allan: “This man took a plank of wood, a few strings, and some wires and transformed people’s lives in a way that few others have”. And that phrase describes him better than hundreds of paragraphs.

He will be talked about for centuries. His soul lies above the stars, but his music will remains with us. R.I.P. dear Allan. We will meet again on the other side. 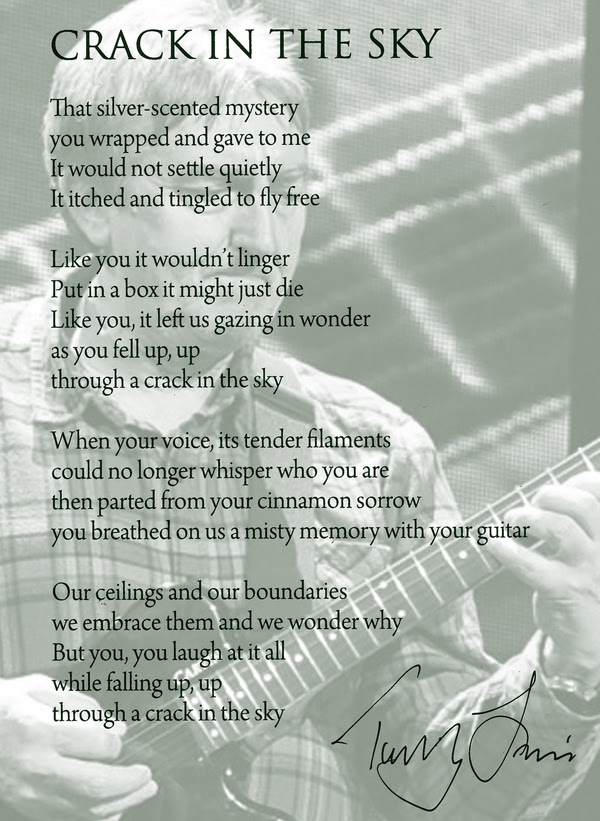 Tony Levin‘s poem for Allan Holdsworth, “Crack In The Sky”