As a marathon runner and a music reviewer, I am aware that timing is of the essence. Ideally, the recap of events like the one portrayed in this article should have come out a handful of days after it happened. However, life happens, and it took me so long to process how intense the whole experience was, that it’s only coming out now. I’m willing to bet that many others who have been there felt the same.  I still see several other attendees posting their pics online, and by the way, that was another very interesting side effect of this event: we became friends with others that share the same Rush obsession. So join me as I describe the day I met Alex Lifeson and Geddy Lee of Rush

On October 13th 2018, 150 lucky Rush fans gathered downtown Toronto for a very exclusive opportunity: a wine tasting event with the presence of Geddy Lee and Alex Lifeson, respectively bass player and guitar player of the most iconic and successful trio of Canadian music. The event had been booked a few months in advance, and as many other participants would attest, it became increasingly hard to sleep as the date approached. On the night before this tour, I managed to get two hours of sleep only, and woke up at 4:30 thinking I was late. I made it in time though, and the experience more than made up for a few nights of lousy sleep.

As per the instructions, everyone gathered at the Panorama Lounge on Union Station, downtown Toronto, at 7:30 am. As I entered the lounge, I was met with other 149 incredulous faces, looking like the chosen few, selected to enter the gates of Heaven. The sense of possibilities was palpable, and feelings were running high. I made some friends very quickly, and everyone was unanimous in saying, “is this really happening? I can’t believe how lucky we are!”. Before our journey began, we were given a list of items to bid on – an auction would be carried out during the event. While I would have loved to be the winner of one or more items on the list, the starting bid for most of the 27 lots was prohibitive for a working man like myself. Some of the most remarkable items were: “a golf threesome hosted by Alex Lifeson at the Goodwood Golf Club in Ontario” (starting bid: CAD 8,000.00), an “Art of Rush” book by Hugh Syme, autographed by Alex and Geddy and a Rush Model Truck also autographed by both.

We boarded train number 2112, and as soon as it departed on its way to St. Catharines, Geddy and Alex greeted us on the speakers. Geddy was his usual, very polite self, while Alex didn’t waste the opportunity to goof off from the get-go: “breakfast will be eggs benedict…no, it’ll be salmon and French toast…oh, actually it has just been confirmed: it’s crackers and yesterday’s coffee!”.

As we made our way to Niagara-on-the-Lake, both started to walk through the train seats and greet everyone who donated for “Grapes for Humanity”, the entity behind the whole program – an organization that carries out humanitarian projects in areas of need, particularly in Africa. You can find more about it on their website. I saw both coming at the front end of the train, and tried to contain myself. I told Geddy that my biggest claim to fame as a music fan is the fact that I was at the show when they recorded the Rush in Rio DVD. He smiled and thanked me, and moved on. When Alex came I was a bit more relaxed, and asked if after him, Neil would be the next one greeting us – he said “yeah, but don’t wait too long”. When asked about a possible tour or album, he jokingly said “yeah, we’re aiming at R70. We’ll play for 5 minutes and then drop dead”. From that point on, the joke with the ones in the nearby seats was to come up with the best name for an R70 tour – “Between the Wheelchairs”, “Roll the Broken Bones” and ‘Caress of Stamina” were among the best ones. I guess we were too nerdy to come up with better names on the spot.

We reached the exquisite location of Peller Estates, a winery founded in the late 60’s which has won many prestigious awards for signature products such as Icewine, Chardonnays and Rieslings. A quick explanation about how they grow their grapes and how they blend it with other varieties coming from California, and we were free to interact with each other, taste some wine, enjoy an Icewine experience, and take the “official” event photo, with photographer John Gundy (Find more about John’s work here). Unlike many other wine tastings, there was no limitation of how many glasses we could try, and Wayne Gretzky whiskey was being served in no small amounts either. That lightened the mood considerably, and since many of us had already interacted with Geddy and Alex a little bit at that point, much of the tension in the air had ben lifted. That made for some interesting conversations with other fans, and more geekiness involved. They were both very accessible, caring and gentle with the fans. I saw two people demonstrate their fandom in levels which are way beyond my fanaticism with the band: one was David Wharton, who had a tattoo of Geddy’s face on his right leg which caught the attention of the man himself, and the other was Felicia Menton, who flew from Oro Valley, Arizona for the event. As we stood there chatting, Felicia recognized two female voices and decided to ask: “excuse me, are you Charlene and Esther, who appear on Alex Lifeson’s song “Shut Up Shuttin’ Up?”. Lo and behold, it WAS them. Charlene, Alex’ wife, and Esther, her best friend, appear chatting at length in the background while Alex soloes on that track. Don’t get me wrong, I’m a Rush freak, but I would never have gone as far as recognizing their voices! 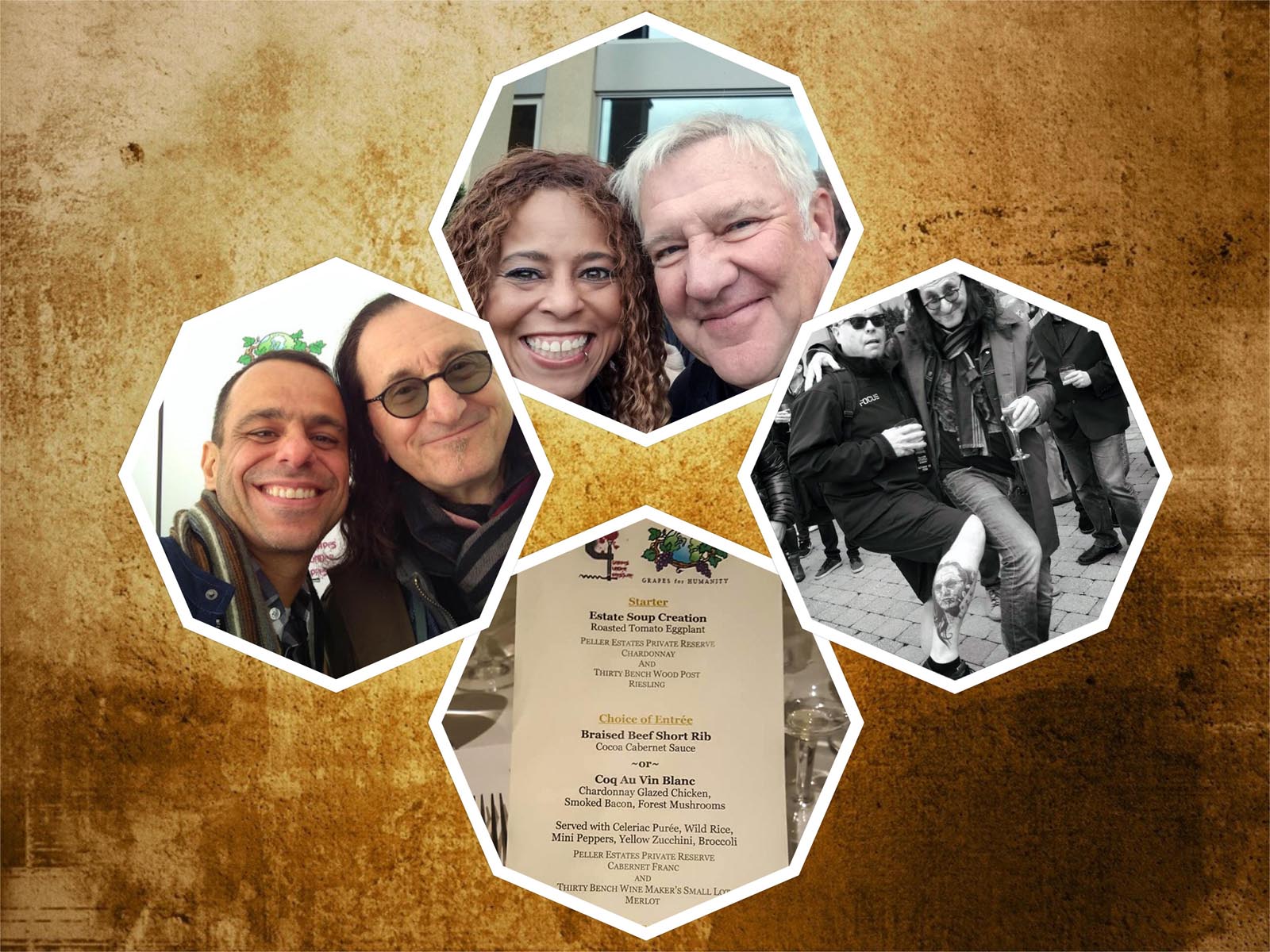 With the wine tasting done, I stood there with hungry mind and open eyes, and soon lunch would begin. Customers chose between Braised Beef Short Rib or Coq au Vin Blanc. I chose the former, and did not regret it. The best part of lunch was meeting strangers united by their Rush passion, and trading stories about the extremes we went through to experience the band. All of a sudden, cast-outs like myself were surrounded by people who understood my Rush references and silly jokes, and my ultimate obsession with this band. As we stood there telling tales of devotion, expletives like “epic”, “amazing” and “insane” were in no short supply. After dessert, Geddy went around the tables greeting the guests once again, and by that time we were chatting like old friends: I told him how much I enjoyed his solo album “My Favourite Headache” and how I was hoping for a sequel, he hugged me and said “bless your heart, man”. Unforgettable! Did I have this dream, or did this dream have me?

The rest of the afternoon was reserved for the results of the silent auction and an “Icewine Lounge Experience” which was really enjoyable. Honestly, at that point I felt like my mission there was accomplished, and that there wouldn’t be much more to aspire in terms of rock, prog or metal fandom. There aren’t many occurrences I can think of that would top what had just happened. Some of us stood in awe with the landscape, or what just happened, as if hangover from the adrenaline surge of meeting mythical creatures like Geddy and Alex. And the amount of alcohol consumed certainly didn’t help us feel any more grounded!

After a quick marshmallow roast, we got back on the train – not to Bangkok, but back to the flickering lights of Toronto. Both guys stood on each side of the bus that took us back to the train and greeted everyone individually. One last interaction I had with Alex is worth mentioning: as we boarded the bus I saw him and did the “we’re not worthy” gesture that the crowd did during the song “Freewill” on Rush in Rio. He smiled and said, “I’ll never forget that!”

During our trip back we received our gift baskets which had many priceless gifts: a Peller estate wine bottle autographed by both members of the band, a license plate frame that read “I’d rather be at a Rush concert”, a shirt with “Geddy and Alex’ excellent adventure” and the event’s logo, and a coffee mug.

One question that I believe the majority of fans asked was about new material and new tour from the band. The response to me is clear: this is by no means the end of Geddy’s and Alex’ musical journey, but there is ZERO chance of them releasing anything new as Rush. Deluxe editions of “A Farewell to Kings” and “Hemispheres” have recently been released, and a show or two might see the light of day soon, either on CD or DVD. But they’ll never tour or record again as Rush. As a fan, we always want one last tour, one last studio album, and we got it – we just didn’t know they were IT when they happened. For now, we should be happy they gave us so much and that they’re able to step away from the limelight for a bit and still celebrate their legacy with close friends and fans. Just like our collaborator Nick Andreas expressed in his article of March this year: nostalgia is unavoidable, but it’s up to us to accept that Rush-as-we-know-it is done.

One month after this experience, I am still connected with the people that shared the same dream and who I now consider to be friends. We will forever dwell in that moment, and treasure the day we came as close as possible to two out of three men responsible for the soundtrack of our lives. Few things in life are certain, but I can assure you that no other musical encounter will top what happened on that day. And by the way, if you’re reading this and were part of this event, please share your thoughts and pictures with us in the comments section just below. We’d love to have your perspective on such a unique and magical event!