The first show, in the august surroundings of the London Palladium, saw the kick off of Yes’ 50th Anniversary Weekend. The venue was the focal point for not just 2 shows, but also a fan convention featuring 2 Yes tribute bands, Roger Dean and various Yes book authors, bus tours of London’s key Yes locations, and the launch of a revamped version of the Fly From Here album featuring a Q&A session with the band.

The Palladium, which holds just over 2,000 people, is more than 100 years old and entering its doors, walking the rich carpets into the auditorium itself feel like a special occasion – like, I suppose, arriving at a birthday party. Certainly tonight had the air of a celebration and a salute to this band of (for the sake of argument) 17 members with an impressive back catalogue of genre defining material. It has also been a band with a certain amount of turmoil in its ranks, something that unfortunately continues today. But tonight was all about the band who have the honour of being the current line-up, as has always been the way with Yes, and this history is what that line up takes forward. 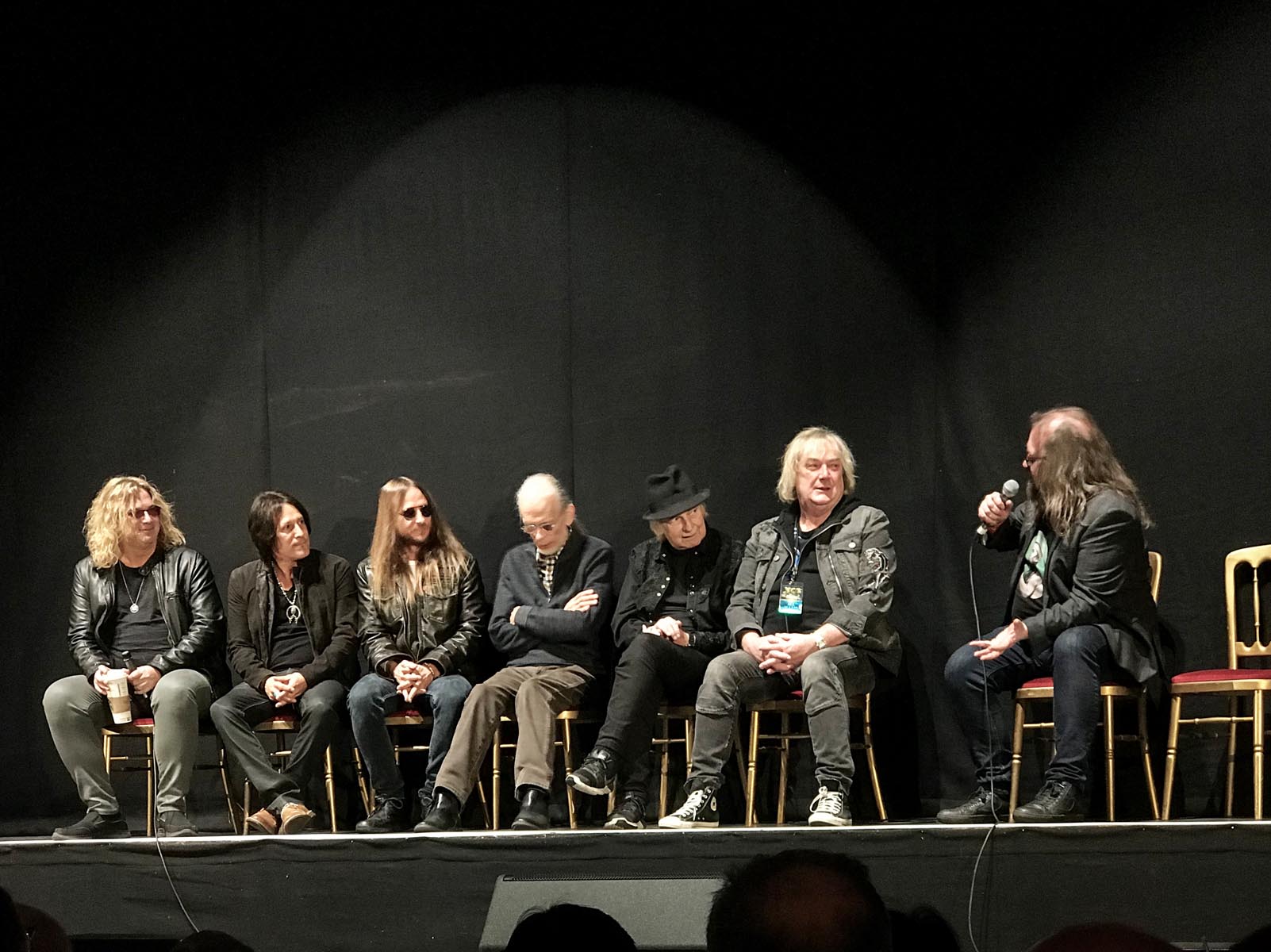 After spending some time viewing Dave Watkinson‘s fantastic exhibition of press cutting and memorabilia (an incredible montage featuring every band member), along with viewing some of iconic artwork of Roger Dean, it was time for the music. Of course Stravinsky’s “Firebird Suite” got things underway as it did on the Yessongs live album and many subsequent shows, leading into “Yours Is No Disgrace” – the song that introduced Yes fans to then new guitarist, Steve Howe. From the start, you can tell that not only will this be a show that reflects the high musical standard we know Yes for, but also the lighting and visuals which interact with the music will form a suitable backdrop.

The first half of the show was made up of a selection of songs from Yes‘s late ’60s / early 70s catalogue. I admit I was a bit disappointed when I saw that set list earlier in the tour but once experienced, I realised it was a near perfect set list suited to the band that was on stage. Drummer Alan White‘s place was taken by Jay Schellen, perhaps the happiest drummer in rock! He was truly the engine behind this performance and played with energy throughout. The furthest dip back into the catalogue was to “Sweet Dreams” from Time And A Word, played, per Steve Howe, in the style of their 1975 QPR show.

“South Side of the Sky” showed that Geoff Downes had firmly fitted back into the band- while his native style is quite different from Rick Wakeman, he has found his space interpreting the classic catalogue respectfully and in his own way. An exquisite “Mood for a Day” was followed by “Wonderous Stories”, a great opportunity for harmonies between Davison and Sherwood which show how great a combination their input into the band is. A triumphant “Parallels” was sent out as a tribute to Chris Squire and brilliantly executed (I remember how disappointed I was in the version of this song during the Three Albums tour – the band have managed to reach new heights notwithstanding the absence of Chris). Sadly there was no version of “Onward” which did make the setlist at some shows earlier in the tour, presumably because of the extra treat tonight – more on that later. “And You And I” closed the set and as a whole it was a glorious, well paced hour of Yes Music.

Act 2, we already knew, was going to be focused on Tales from Topographic Oceans. The pattern in Yes tours has been that the UK tends to be playing catch up with what they’ve played in the rest of the world… in the US Tales from Topographic Oceans was paired with Drama. While it may not have been every fan’s choice for 45 minutes of a Yes50 show, I was certainly delighted to hear it rather than, for example, having them lurch uncomfortably through “Owner of a Lonely Heart” (leave that to the other lot!!!). In the fan convention Q&A both Billy Sherwood and Jay Schellen commented that they had known, loved and played this music since their younger days and were delighted to get the chance to play it. Of recording the album, Alan White commented “we didn’t know what we were doing and left it to Eddy Offord to piece it all together”… but Steve soon corrected him saying that Jon and he had a “seed of an idea” and all they had to do was convince the others. 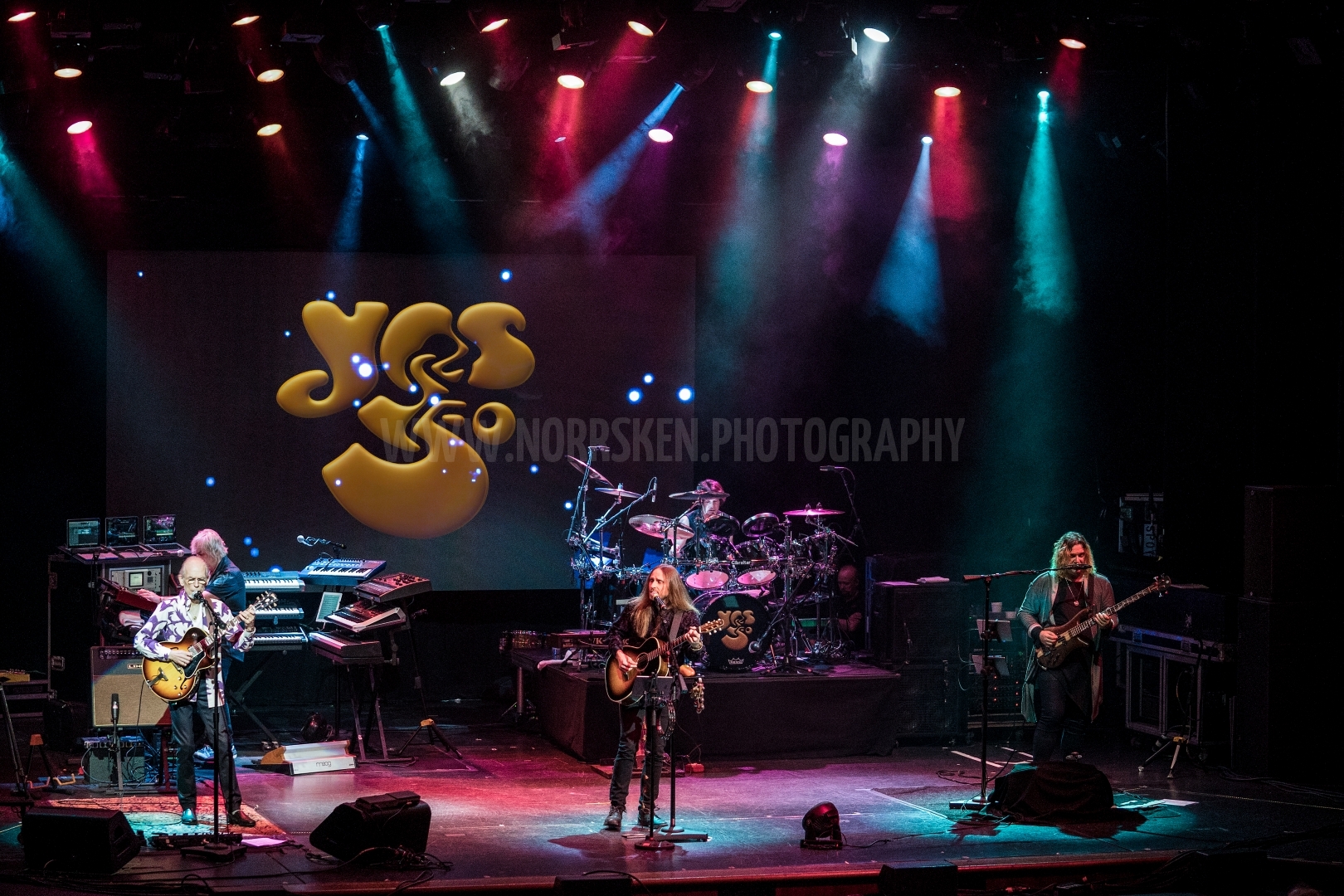 Well having experienced “The Revealing…” followed by “Leaves of Green” and “Ritual”, there is no doubt it was the right choice. It wasn’t a case of the band ignoring large parts of their legacy in exchange for an easy crowd-pleaser (though the crowd were more than pleased!) – it felt more like the band reclaiming their most mocked and misrepresented music and doing it justice. The percussion section of “Ritual” signalled the first appearance of Alan White and he closed out that song in fine style. The opening part of the drum solo showed that while White may not be able to carry a whole show at this time, he is still a very capable drummer, even if it is in smaller doses.

Next up saw Jon Davison leaving the stage and Trevor Horn joining in his place to sing “Tempus Fugit”. The last few years have seen Horn venture out of the recording studios of the world (he said he had done enough of that for now!), leading a touring The Trevor Horn Band and being bass player in Dire Straits Legacy. He has also sung this song with Yes a few times in recent years, so it was great to see this as part of the birthday celebrations. And again Trevor seemed to be in celebratory mood, enjoying himself and giving a good vocal performance. The show ended with stalwarts “Roundabout” and (a slightly truncated) “Starship Trooper” with the audience on their feet throughout. The 6 Yes men were on stage for these two songs and rightly took their bow to the standing ovation they deserved. Hearing this line up at work I very much felt that the future of the band is in safe hands. When asked about a new album at the Q&A, Steve Howe answered “it could happen, it should happen” but stopped short of saying it would happen!

Even with their line up changes and ‘ups and downs’, it’s an amazing achievement for any band to reach this landmark and the whole weekend, in all of its respects, particularly the efforts of Dave Watkinson and Brian Neeson, was a fitting celebration and tribute to that history.

Set 1: Yours Is No Disgrace / I’ve Seen All Good People / Sweet Dreams / South Side of the Sky / Mood for a Day / Wonderous Stories / Parallels / And You and I