Ever since I read about Uli Jon Roth launching his “Ultimate Guitar Experience” tour, also featuring Andy Timmons (ex-Danger Danger, currently with the Simon Phillips Band and his own Andy Timmons Band) and Jennifer Batten (Michael Jackson’s guitarist for many years and second guitar for Jeff Beck, well known for her two-handed tapping technique) I knew this would be a not-to-be-missed event, a true celebration of the art of guitar playing at the highest level. Ironically I missed their Fort Lauderdale’s show last February due to a bad sciatic pain crisis in my right leg, which threw me in bed for around three weeks; but my disappointment vanished when I realized they will be back in Florida for a last tour stop in Melbourne. Needless to say I metaphorically “jumped in one foot” and marked my calendar accordingly, and the day of the show my wife and I drove for three long hours from Miami to The Maxwell King Center to catch what was promising to be and spectacular fest of guitar awesomeness.

David Klosinski, the really young back-up guitarist for Uli Jon Roth opened the show with Uli’s band; presenting a composition of his own entitled “Electric City.” The performance was precise and proved he can really play with great chops and tones. One detail I immediately noticed– the sound was too loud–and I thanked myself for bringing my earplugs with me.

The first guitar soloist was Andy Timmons who came on stage in a trio. Andy’s guitar work is stunning and totally jaw-dropping, his presence on stage really blew me away. His playing was stellar, very tasty and versatile, and reminded me at times of several other guitarists like Eric Johnson–but with his own style. Every note dripped feeling and emotion, from retrained blues to blistering runs; he did it all with grace, enthusiasm and his ever-present smile. He absolutely lit up the room and it was a genuine pleasure watching him play. Timmons executed a string of instrumentals taken from his own solo discography, which included “Electric Gypsy” and “Cry for You.” And after a few songs, he dedicated several minutes of his performance in tribute to Beatles producer George Martin, who died weeks before. Timmons also presented a moving instrumental of “Strawberry Fields Forever” that seemed to stun the audience, myself included (I should have the “What rock was this guy hiding under?” look in my face). Richie Monica (Uli’s drummer) and Nico Deppisch (Uli’s bassist) commanded the rhythm section for Timmons during an hour long set which practically felt like 20 minutes, and were both top notch companions. The crowd applauded at unison for several minutes when he wrapped up his magnificent set. 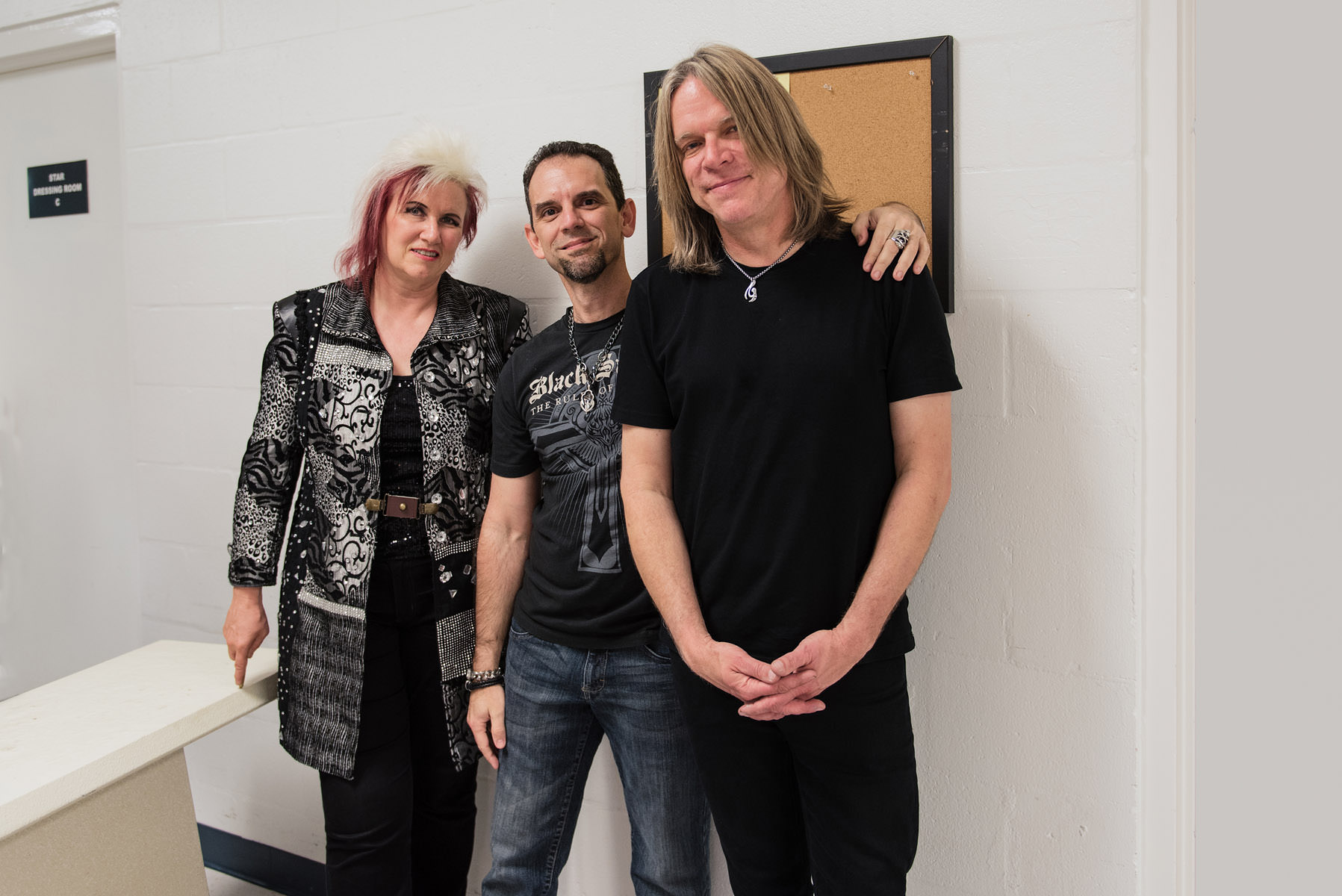 Jennifer Batten, Andy Timmons, and I after the show

After this, I had no idea what to expect as they set up a square shaped video screen towards stage right and a table with a multitude of computers and effects. “How ‘bout that Mr. Timmons? Did he melt your face off or what?” Jennifer Batten exclaimed as she took the stage. After some humorous banter with the crowd, Batten began to play over recorded backing tracks while showing her homemade videos about the songs she effortlessly played. She demonstrated her characteristic technical prowess, but was nearly immobilized to one area of the stage where her pedals and effects were affixed. The music and videos paired really well and made for a cool aesthetic, but I could definitely tell it was not for my demographic. She looked like she came straight out of the 80’s with a sequined blazer and an affinity for pinch harmonics. It was an unconventional set, and sometimes rather cheese, even though she really figured out how to make some pretty bizarre guitar stories that definitely translate in a visual way. The highlight of her set was the final song, where she managed to stitch together some of the most well-known guitar solos ever made in a retrospective medley of songs from the ‘60s up to modern day, which included the Ventures “Walk Don’t Run,” Robin Trower’s “Day of the Eagle,” Nirvana’s “Smells Like Teen Spirit”, Van Halen’s “Hot for the Teacher” and many more, also throwing in the scorching solo from Michael Jackson’s “Beat It”.

Anticipation for Uli Jon Roth was at a fever pitch when the lights went down shortly after Batten’s set. For those of you not familiar with Uli Jon Roth, it may be most appropriate to describe him as a guitar guru and a visionary. This latest adjective became abundantly clear when he conceived of a guitar with 30 frets (The Sky Guitar) because 24 frets just wasn’t good enough for him. His ability to draw such emotion out of the notes stems from the root of his approach, which is the connection between the physics of music and sounds, to the metaphysics of our spiritual and emotional response to the world around us.

When the Uli Jon Roth band came onstage, the energy rose at once to an even higher level than where Batten and Timmons had set it during their performances. Considering the only 200 souls in attendance, the cheers were proof that the people were there to see the Roth, who came to prominence with the Scorpions and Electric Sun, and has gone on to enjoy a successful solo career.

Watching Uli Jon Roth on stage is an absolutely magical experience as he is just so fluid and fast and talented on the guitar, and his hair blows in the wind like he just doesn’t have a care in the world the whole time, for an enhanced effect. He is one of those rare guitarists, who take music to a whole new level. You just marvel at the way he plays guitar. He plays like he’s not of this world. Even when he wasn’t playing, Roth’s energy and the effect he had on the audience was undeniable. He engaged with his smile before he scorched with his incendiary guitar licks. From classical seven string Flamenco pieces to screaming hard rock anthems, Uli missed not one single note, creating an atmosphere of emotion and mind altering complexity. 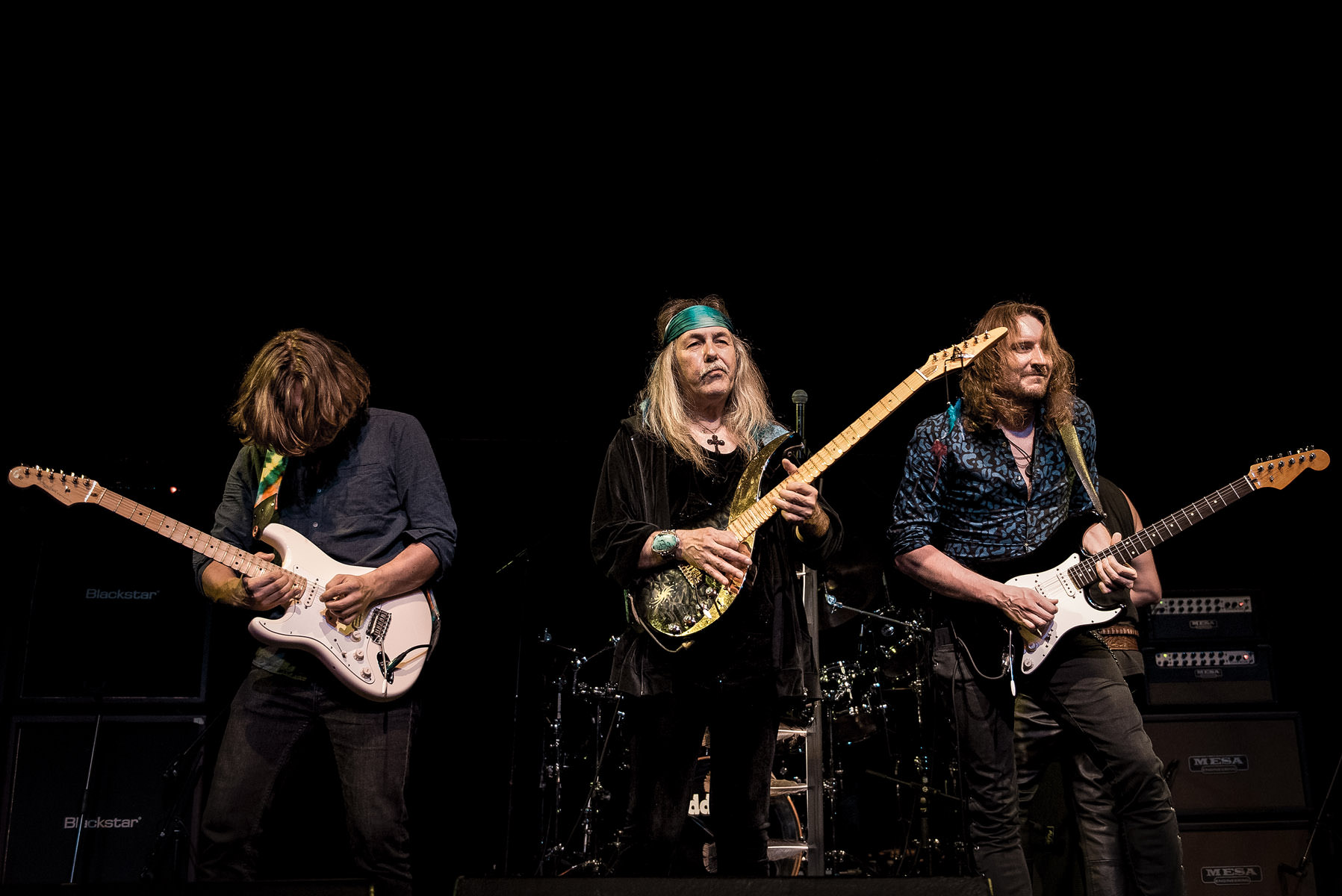 Roth’s set was a combination of songs from his extensive catalog, including the recent Scorpions Revisited and Transcendental Sky Guitar albums. My favorite tunes were the magnificently powerful version of iconic and mystical Scorpions classic, “The Sails of Charon,” as well as the equally inspired versions of “Sun In My Hand,” “We’ll Burn The Sky,” “Fly to the Rainbow,” and “Dark Lady”. An imperfection to an otherwise perfect set was the omnipresent extra-loud sound, causing that singer John West’s vocals were sometimes inaudible in the front part of the venue. Despite that John West’s voice was powerful and emotive, and just like Klaus Meine, he nailed all the notes with relative ease. It would also be totally unfair to overlook the rest of the band performing with Uli, it is fair to say they were all exceptional.

To end the night in an even higher note Batten and Timmons joined Uli Jon Roth and his band for the last two songs of the evening, two mesmerizing renditions of Hendrix ‘classics: “All Along the Watchtower” and “Little Wing.” The three greats played exceedingly well together, trading solos, riffing off of each other’s parts, and making it all look like boundless fun. It was a great an intimate gathering, a magical evening with three of the world’s best guitarists and one not to be forgotten but remembered over and over again. Describing this night as the Ultimate Guitar Experience is just a poorly made understatement.