Heavy metal was alive and well at Sony Music Hall in New York City on Hallows Eve, where veterans rockers, UFO and classic rockers, Last in Line both put on explosive shows.

Last in Line are back with an 18 date US tour that started in Phoenix AZ on October 15th and will take them across the US until the middle of November before leaving for Europe. The band consists of Vivian Campbell [guitar], Vinny Appice [drums], Phil Soussan [bass], and Andrew Freeman [vocals]. In the unlikely case you’ve been living under a rock for the last 36 years, Vivian and Vinny were members of Ronnie James Dio‘s band, and together they co-wrote some of metals most definitive albums like “Holy Diver”, “The Last in Line”, and “Sacred Heart”.

Tonight’s show was a testament to the strength of this hard-rocking quartet’s music, both past and present, which helped pack Sony Music Hall for their 10 song/45 minute set. Despite limited stage space or lighting, the band still shined. They are a powerhouse band whose star wattage could illuminate Broadway. Eager to give this hungry New York crowd what they had been waiting in a short amount of time, Last in Line delivered a set-list drawn from Last in Line‘s two CDs, “Heavy Crown” and “II”, as well four classic Ronnie James Dio songs. The Dio songs have outlasted the hands of time and sounded just as fresh as when originally recorded. I asked Vinny about the technical proficiency of Last in Line when it came to playing the Dio classics. He replied, “Other bands may know all the songs, but we know all the notes because we wrote them. When we play together, it’s that natural personality of Vivian and I that maintain the Dio sound. He is the guitarist in the band, and nobody played like him back in the day; he is an amazing guitarist with a unique sound.” 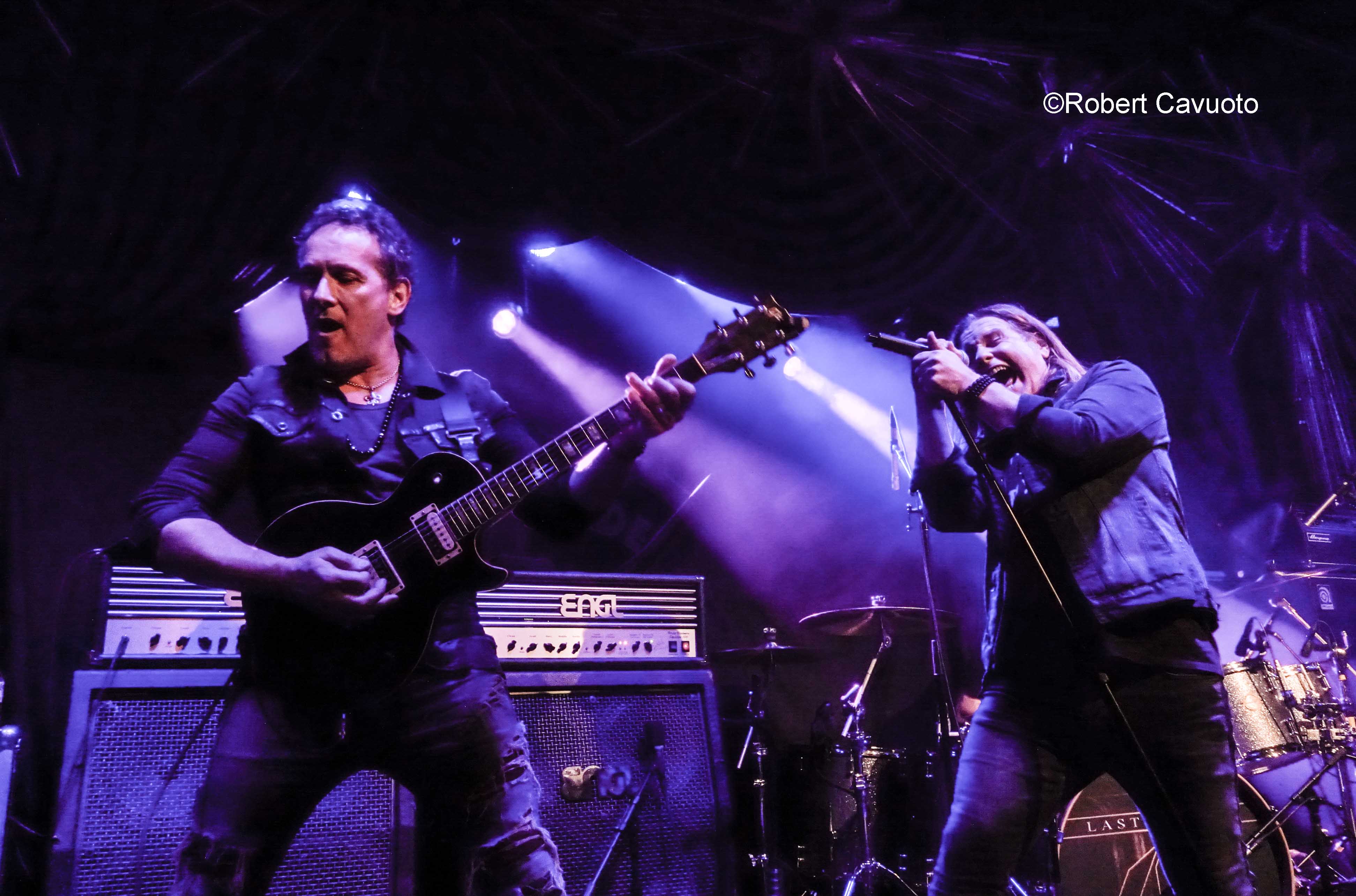 Vivian Campbell and Andrew Freeman with LAST IN LINE

No truer words could be spoken about the band’s sounds and Vivian‘s playing. His only guitar tonight was the original black Gibson Les Paul, which he used to record the Dio albums. He assaulted this well-worn guitar in ways that most people would never think possible; bending pitches with his fingers, [as he doesn’t use a tremolo], finger tapping, and neck bending. All of these techniques were combined in blazing riffs on songs from “Rainbow in the Dark” to “Year of the Gun.” It was awe-inspiring to watch him do all the intricate guitar work from the Dio albums in a club setting.

Vinny played the drums like a man possessed pounding his kit while dazzling the crowd with his complex techniques. Phil provided some really nice bottom end to the band without overpowering Vivian‘s guitar. Together in harmony with Vinny, they were like a freight train blazing through the show as they pounded out the thunderous rhythms. Andrew took command of the stage as a consummated front-man. He exuded tremendous vocal strength yet expressive; which helps gives the band its unique sound. Anthems like “Holy Diver,” “Last in Line,” “We Rock,” and definitely provided an evening filled with tremendous flashbacks from the 80s while creating some amazing memories with their newer songs “Landslide” and “Starmaker” to just name a couple of them.

Back in the ’80s, when the New Wave of British Heavy Metal was at its peak, UFO was a musical force not to be reckoned with. The band has been going strong for 50 years, and to commemorate the magnificent milestone, they have put together a 50th Anniversary tour of America. The current line-up consists of Phil Mogg [vocals], Andy Parker [drums], Vinnie Moore [guitar], Neil Carter [keyboards/rhythm guitar], and Rob DeLuca [bass]. 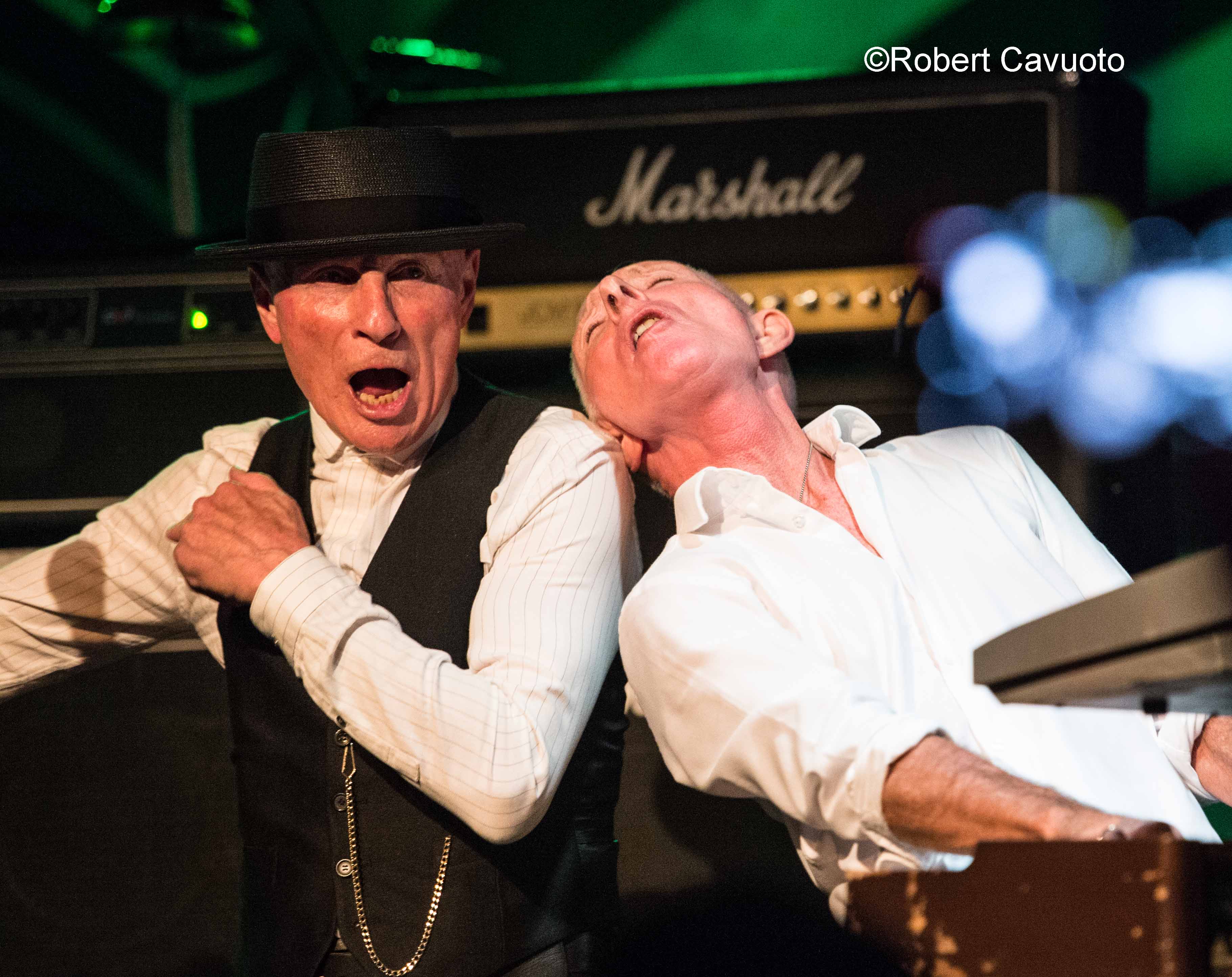 UFO has played for tens of thousands of people at European festivals, so to see them in this sold-out inmate club setting was a thrill. Though the stage was smaller than they are used to, there was no shortage of energy on it. They opened with “Mother Mary” and then proceeded to put on one of the best 90-minute metal shows that I have seen in a long time. No gimmicks, no videos, no fire or smoke – pure unbridled rock & roll. Some of the classics that were performed included “Cherry,” “Lights Out,” “Rock Bottom,” “Too Hot to Handle,” and “Doctor Doctor” as one of the encores. Each song was played with the passion it deserved, and the fans ate it up.

Founding members Phil and Andy are the driving force and carrying the torch for the band. Phil dazzled the crowd with his powerful vocal ability making all the classics sound flawless. Vinnie is the riff master that has helped propelled UFO‘s career over the last 15 years and quite the showman. His tonal palette is expansive, colorful, and unique as he draws upon his countless years of practical experience. His playing was edgy yet tasteful and fluid. He is the lynchpin to ensuring that UFO‘s signature sound is perfectly captured. Andy on drums and Rob on bass, laid down the back-beat to the thunderous rhythms.

UFO certainly demonstrated they still cared about the music and being on stage; they gave an invigorating performance that had everybody on their feet all night long to the furthest reaches of Sony Music Hall!