It’s terribly frustrating when you’re misunderstood. Just ask the guys in Toto. They’ve managed to make a 40-year long career out of it. And on Sunday night in Denver, they made a valiant effort to prove once again that what people think they are, and what they really are, don’t have all that much in common.

To the average, casual listener, Toto is the “Yacht Rock” purveyors of that iconic song that won’t get away (“Africa”). They’re the Southern California soft rock architects behind radio ballads like “I’ll Be Over You” and “I Won’t Hold You Back.” And they were the soul-less corporate rock whipping boy for “serious” music critics like Rolling Stone.

Only they’re not. They’re just badly misunderstood. Under the shiny exterior of those radio hits is a precision tuned engine built by a group of high school friends who grew to become some of the finest musicians on the planet. Do a little study of liner notes and you’ll find that they were the studio cats who played on hundreds and hundreds of records everyone knows but don’t associate with Toto. We’re talking a massive, genre-less span that includes the likes of Michael Jackson, Boz Scaggs, Steely Dan, Pink Floyd, Miles Davis, Donna Summer, Joe Cocker, Barbara Streisand, Joe Walsh, Ricki Lee Jones and many, many more.

When “Beat It” comes on the radio, people think of Eddie Van Halen playing the guitar solo. But Toto’s Steve Lukather is playing all the rhythm tracks. When “Human Nature” comes on the radio, people think of Michael Jackson’s fluid dance moves, but the song was co-written by Toto’s Steve Porcaro in response to his daughter having a rough day at school. When “Lowdown” and “Lido Shuffle” hit the classic rock airwaves, people think of Boz Scaggs’ signature voice, but both were co-written and played on by Toto’s David Paich.

The body of work (and stories behind the work) are too numerous to tell, though some will be brought to light in Steve Lukather’s upcoming book, “The Gospel According to Luke,” which was already held up once due to a lawsuit. So when it comes to the band celebrating four decades of music on their “40 Trips Around the Sun” tour, the task of creating a representative set-list is anything but simple. Most bands that are still on tour after 40 years are phoning in a short, predictable “nothing but the hits” safe set list. Not Toto. They opened the show with “Alone,” one of three new songs added to their newest greatest hits package. One of three songs that only a truly dedicated fan would even know. But a really strong song nonetheless.

Giving expectations the middle finger, Toto followed the surefire crowd pleasers “Hold the Line” and “Lovers in the Night” with yet another new track, “Spanish Sea.” They say that legacy bands playing new music is dangerous because it sends droves of the audience to the bar and bathroom. Apparently Toto doesn’t care what most bands do. Six songs in, they pulled out “Jake to the Bone,” a fusion instrumental that roamed the jazz and rock landscape with extended solos and various members showing off their significant chops. You could sense that some of the crowd was a bit unsure of what to make of this extended jam, but they took to their feet when it was over, because the musicianship was indisputable.

Toto likely holds the record for the most recorded songs named after a girl. Their catalog includes, “Carmen,” “Holyanna,” “Melanie,” “Anna,” “Mushanga,” “Pamela,” and “Mrs. Johnson.” On this night, they delivered a delicate version of “Lea” and then contrasted it with a raucous rendition of “Rosanna,” which Lukater called a party song that had everyone dialed in. After the addictive shuffle-based hit concluded, the band gave each member a chance to choose a song they wanted to play. Lukather’s pick was the polarizing R&B 70s song, “Georgy Porgy.” Steve Porcaro chose “Human Nature,” which begs the question, if you co-wrote the song and played on it with other members of your band, but it was sung by and made famous by somebody else, are you still performing a cover? Or is it your song?

The next pick belonged to David Paich, who was noticeably absent from the stage due to suffering of compromised health after the recent European tour. Lukather tastefully referenced Paich’s absence by quipping that he was recovering from penis reduction surgery. Filling in for him and having a great time was Dominique “Xavier” Talpin, who previously played with Prince. Paich’s pick was “Holyanna,” and it was slightly odd not hearing him sing on it, and his presence was missed in part because Toto has a bit of a tragic history with its personnel. Def Leppard may have had their drummer lose an arm, but Toto had their legendary drummer Jeff Porcaro pass away from a heart attack in 1992. His brother, Mike, who played bass in the band, passed away in 2015 after succumbing to ALS. Which leaves their brother, Steve, the only surviving Porcaro brother of the original band. They’ve had four different lead singers over the years, with some leaving and returning later, and another passing away from cancer in 2014. 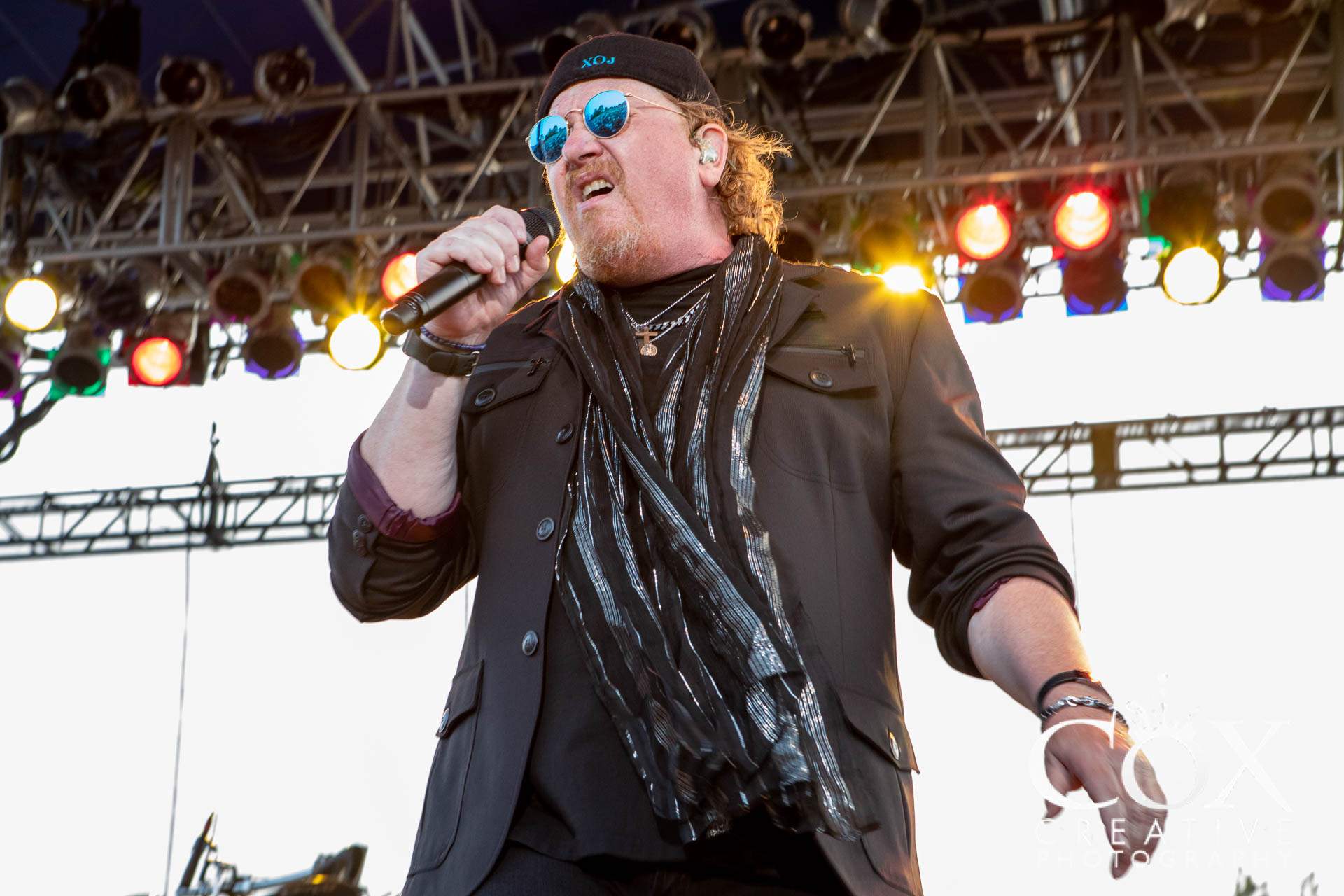 At age 57, lead singer Joseph Williams still sounds great. He has a proven history of reliable work with the band in the mid 80s as the lead singer on both “Fahrenheit” and “The Seventh One.” Before returning full time to Toto in 2010, Williams was called upon to be the singing voice of Adult Simba in Disney’s Lion King, and he’s also the son of the renowned Hollywood film composer John Williams (the music of Star Wars, Raiders of the Lost Ark, Jaws, and many more). One film that Williams did not score was David Lynch’s “Dune.” Unbeknownst to many, that film’s soundtrack was composed and performed by Toto. And to recognize it, Toto pulled out perhaps one of the deepest tracks in rock history and played the instrumental “Desert Theme” from the film’s soundtrack. At the conclusion, Lukather even joked that most of the audience was probably wondering, “What the hell that was they just played.” One can only give respect and props to the band taking the road way less traveled in recognition of their 40 years of music and playing something nobody saw coming…and pulling it off really well.

The band quickly countered the obscurity with a cover of George Harrison’s “While My Guitar Gently Weeps.” Lukather stated that he was a friend of Harrison’s, and one can’t deny that there’s a certain amount of credibility he gets for playing this song, given that he’s also the primary guitar player in Ringo Starr’s touring band. The solo Lukather played was an incontestable display of both talent and taste, demonstrating why he has been sought out by so many artists and producers, and it had the crowd almost at its height of enthusiasm. Almost.

The pinnacle of enthusiasm was reserved for “that song.” When touring drummer Shannon Forest and long-time percussionist Lenny Castro broke into the familiar rhythm of “Africa,” it was the moment the crowd had been eagerly waiting for, and the they weren’t disappointed as Castro played an extended percussion solo and Williams got the entire crowd involved in a call and response skat that ended with everyone citing the song’s familiar refrain, “bum bum, bum, bu bum bum bum.”

It would have been very safe to save “Africa” for the encore. So Toto did something else. In recognition of Weezer bringing that song back to the airwaves with their chart topping cover version in recent months, Toto returned the favor and broke into a cover of Weezer’s “Hash Pipe” that was heavy, catchy and a solid energetic end of the evening to a show that went many different musical directions but always stayed entertaining.

As the sold out venue that holds 3,500 found out, there’s quite a bit more to Toto than what the casual listener might have expected. Much deserved props are given out for a band not only still working it 40 years into their career, but for taking musical risks and proving the critics wrong, both in terms of playing prowess and staying power.