Let’s set the record straight: punk and sludge infused bands are not my thing. I respect any music genre ever existed, but for some reason I can’t explain, that genre mixture has never clicked on me. Therefore, when I knew I would attend a Melvin’s show as part of my photographer/journalist duties I did not feel particularly elated. Being Melvins a completely unknown band for me the familiarly factor was completely out of the equation, somehow impairing my perspective. But I’ve always been keen to get out of my comfort zone, so there I was driving towards the venue while infusing my ears into some their music out of Spotify.

The Melvins have been spinning fiction for over three decades now, having formed as a heavy metal band in 1983, which is interesting, because heavy metal really wasn’t much of a scene in the early 80s; the type of metal that was popular was much more glam and mainstream compared with what the Melvins do with their own style of music. They were formed by Buzz Osborne (also known as King Buzzo), Matt Lukin, and Mike Dillard, who went to middle school and high school together in Washington state. Mike Dillard left his position on drums, and was replaced by Dale Crover, who is with the band alongside King Buzzo today. They usually perform as a trio, but in recent years have also performed as a four piece with two drummers. Their first full-length studio album, “Gluey Porch Treatments”, was released in 1987. They are credited as having some influence on grunge music, and fascinatingly, Dale Crover was the original drummer for Nirvana on their 1988 10-song demo, which in part made up their first studio album, Bleach. Additionally, King Buzzo introduced Dave Grohl to Kurt Cobain and Krist Novoselic. Years later, the Melvins supported Nirvana on their Nevermind tour, and they themselves were signed to their first major label as a result, and Atlantic Records released “Houdini” in 1993.

The Melvins’ music is influenced by Black Flag’s mix of punk and metal on their “My War” and “Slip It In” albums, and other slow punk acts like Flipper and the Wipers, but also by hard rock and metal bands such as Kiss and Alice Cooper; however, their idiosyncratic approach, bizarre sense of humor, and experimentation make neat categorization difficult. Buzzo has also stated that his guitar playing is more influenced by Black Flag than Black Sabbath, with whom they are often compared. The band have had a really interesting, highly collaborative career, and it’s awesome that they continue to put out relevant and interesting music (This obviously I found out after the show when I felt compelled to research in full swing about them).

Congested traffic saw me arrive later than I’d have preferred, but the opening band was finishing their set when I finally got my press credentials cleared and got myself into a tremendously packed standing room. The stage was being cleared of the previous performance, and I leverage the relative quiet to read more about King Buzzo and company. As the Melvins walked onstage (after a remixed version of ‘Sweet Leaf’ by Black Sabbath blared over the PA) and launched into an energetic “Eye Flys” off their debut album, an unfamiliar viewer (like myself) might wonder how these three wound up together. Buzz “King Buzzo” Osborne stood like a wild psychedelic mystic with his burst of gray hair and chest-eye-adorned cloak; Pinkus’ black T-shirt sporting the word “Bass”over his chest showed off his heavily tattooed arms and neck; and Dale Crover, back behind the kit, wore a sort of alt athletic uniform of black T-shirt, shorts, and fingerless gloves. The sound was clean. The riffs were pummeling. The drumming utterly mind-blowing. And things never really let up from this point onwards, which apparently is part and parcel for a Melvins performance. They followed with an amped-up rendition of the Kiss’ classic “Deuce” and the crowd roared back in a clamoring response. The stage presence of the Melvins at that point was undeniable, only two songs in. 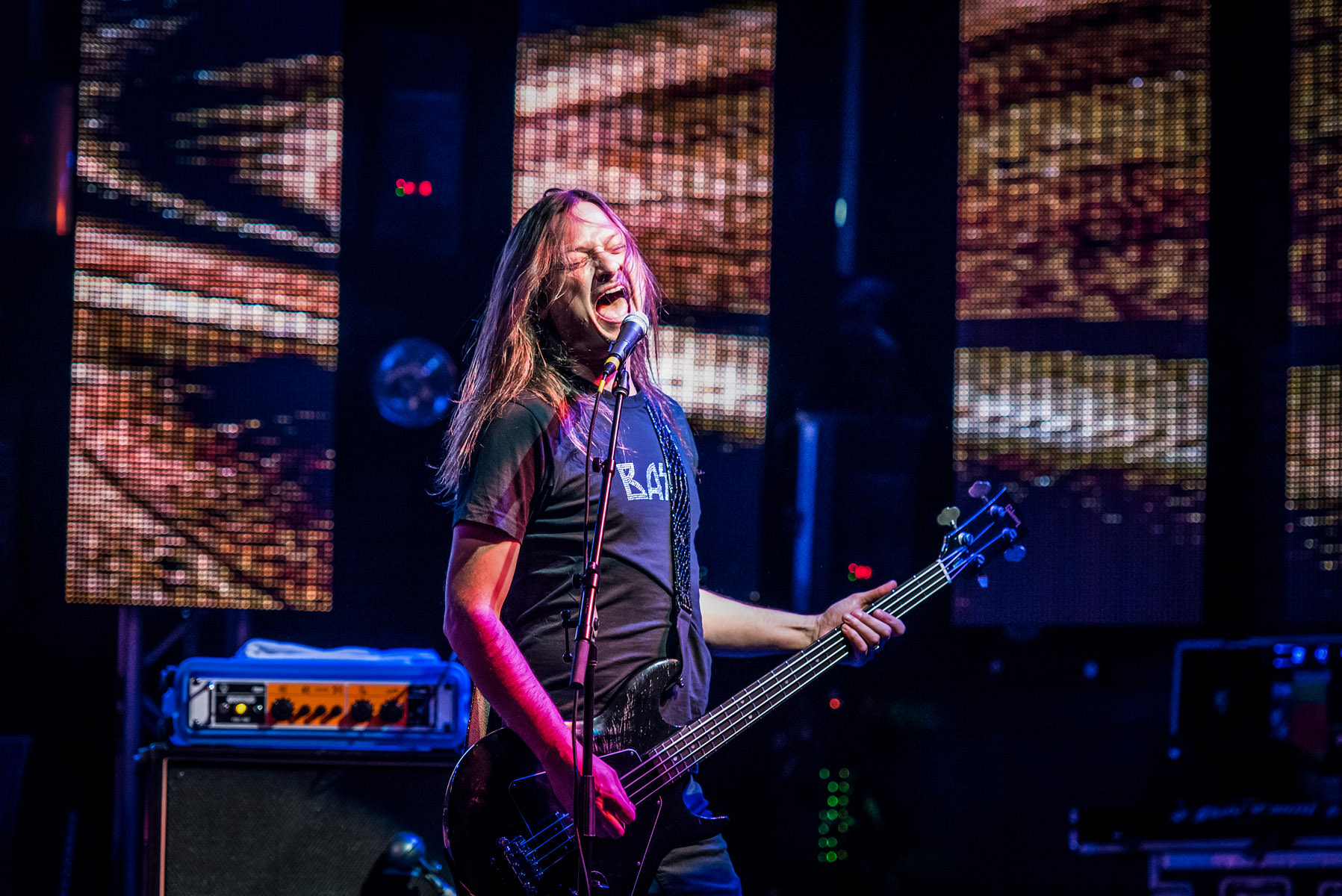 The Melvins playing at The Culture Room

The trio covered a wide swathe of their catalog, though considering their 30-year history and nearly as many albums, no show could include every fan favorite. But the Melvins weren’t interested in pandering; this set clearly energized the three musicians. While I felt the rhythm of every instrument in the small venue, my gaze was constant on the guitar skills of Buzz Osborne. Buzz played with such ferocity that at one point I could have sworn flames were spewing from between the strings. There were plenty of snarls and head-banging during the set as he wrung the notes out of his guitar while Pinkus seemed to be having the time of his life moving incessantly while letting notes ring free by lifting his bass and either slamming it against his hip or swiping at it with his other paw like a grizzly attacking an upstream salmon. His bass blared along with the drums coated in sparkles that could have very well been star dust.

Compared with the ample range of metal bands I am familiar with, I find that the Melvins do have some pop to their framework, in the same way I hear some pop in Nirvana. There is some hook and catchy bits built into their music that makes it a bit more accessible, somehow seamlessly fusing classic rock, psychedelia, metal, and proto-grunge. All their famed aggression channeled into the moment despite the deep-digging nature of some covers like “Leech” and “The Bloated Pope”. That sort of thoughtful, aware sensibility might not always be obvious through the layer of sludge, fun, and outspoken antics, but anyone paying attention should be able to see that the Melvins are much more than mere pranksters. Despite Osborne’s talent for telling hilarious rock anecdotes, he was content to let the music do the talking during evening, and the band slammed through songs in a seamless wrecking ball fashion that had the crowd swaying in unison to the tidal wave pull of their choppy rhythms.

Sadly their set was cut short after Buzzo’s guitar strap broke and they had to start over during “Revolver”. Apparently the issue couldn’t be completely fixed and that was it. As I left the venue with my senses still processing the spectacle I had witnessed, I knew two things for certain: I’d just seen something really special, and that I wanted to see it again. The Melvins is the type of band which sports a take-no-prisoners attitude imprinted in their music DNA, they have the ability of morph in a complete disregard for genre in their craft, and that ability is precisely what makes them unique: you never know what to expect, anything is possible with the Melvins. My photos will never do the night justice, so now I’ll just stop typing and will leave you with a few images from their compelling show. They’re legends for a reason.