After taking the world by storm in 2003 scoring the monstrous hit “I Believe in a Thing Called Love”, The Darkness imploded in a cloud of vanity, drug addiction and conflicts, and their lineup split in two: Dan Hawkins and the remaining members formed Stone Gods, and his brother Justin formed Hot Leg. A few years later they realized that together they were bigger than the sum of their parts, and since 2011 they’ve been determined to reclaim their throne as kings of excess. Last Sunday, on an unexpectedly cold night in Toronto (at least for spring standards), the band made their first stopover in Canada for their Tour de Prance, promoting their new album Pinewood Smile.

The opening band was called Diarrhea Planet, and questionable name aside, they surely delivered! On songs such as “Bob Dylan’s Grandma”, “Hammer of the Gods” and “Separations”, they played an energetic pop punk set, with a sound that sometimes reminded of Green Day, and other times, of Weezer‘s best moments. And the unusual band lineup didn’t go unnoticed: FOUR guitar players shared the stage with the bass player and the drummer. The crowd was instantly won, and engaged in pogo dancing all through their fast-paced and humorous show.

At 9 PM sharp, The Darkness hit the stage, with frontman Justin Hawkins sporting a leopard-print leotard, with fluorescent red laces and yellow boots. I’m not sure of the level of education of these Brits, but subtlety is definitely a word missing from their dictionary. Bassist Frankie Poulain is also adept of a less-than- circumspect dress-code, and tonight he chose a wide lapeled yellow suit. The band kicked off with “Open Fire”, with its open chords and fast pace. One of their biggest hits, the Queen-esque “Love is Only a Feeling” came next, followed by new song “Southern Trains”, which addresses the erratic schedule of public transport in the UK, by far the most unlikely subject ever for a hard rock band.

The heavy number “Black Shuck” followed, and Justin addressed the crowd, mentioning that the show was sold out and that it was Frankie Poulain‘s birthday. In the anthemic “One Way Ticket”, from their sophomore album, Frankie not so much played, but abused the cowbell, a must-have feature for any half respectable party band. The crowd joined Justin in singing “For He’s a Jolly Good Fellow” to Frankie, and it was noticeable how happy they were to be on stage. At one point Justin seemed so engaged with the crowd that he almost failed to acknowledge a roadie handing him his guitar.

The show carried on with the mid-paced stomp of “Givin’ Up”, and the fast new number “All the Pretty Girls”, where Justin‘s high notes reach glass-shattering levels. The ability to enjoy a The Darkness song is directly linked to how well you cope with his vocals, which can be hard to swallow sometimes, not least of all on this track. But most of the time his falsetto is quirkily well-placed, wisely preventing any of their songs from being taken too seriously. “Barbarian” came next with an extra dose of weight and comedy, and as any other song tonight would indicate, this is not your standard retro-band which tries to replicate what Led Zeppelin, Foghat or Budgie did in the past. They are a straight ahead rock band with flare and exuberance, who created a whole subgenre by taking the piss on rock and roll conventions. A new song entitled “Buccaneers of Hispaniola”, with a structure hinting at Zeppelin‘s “The Song Remains the Same”, was the perfect showcase for Rufus Tiger Taylor, who added flashes and dynamic which weren’t there with the band’s previous drummers. Rufus is the son of Queen’s Roger Taylor, but he’s surely not riding on his old man’s coat tails. 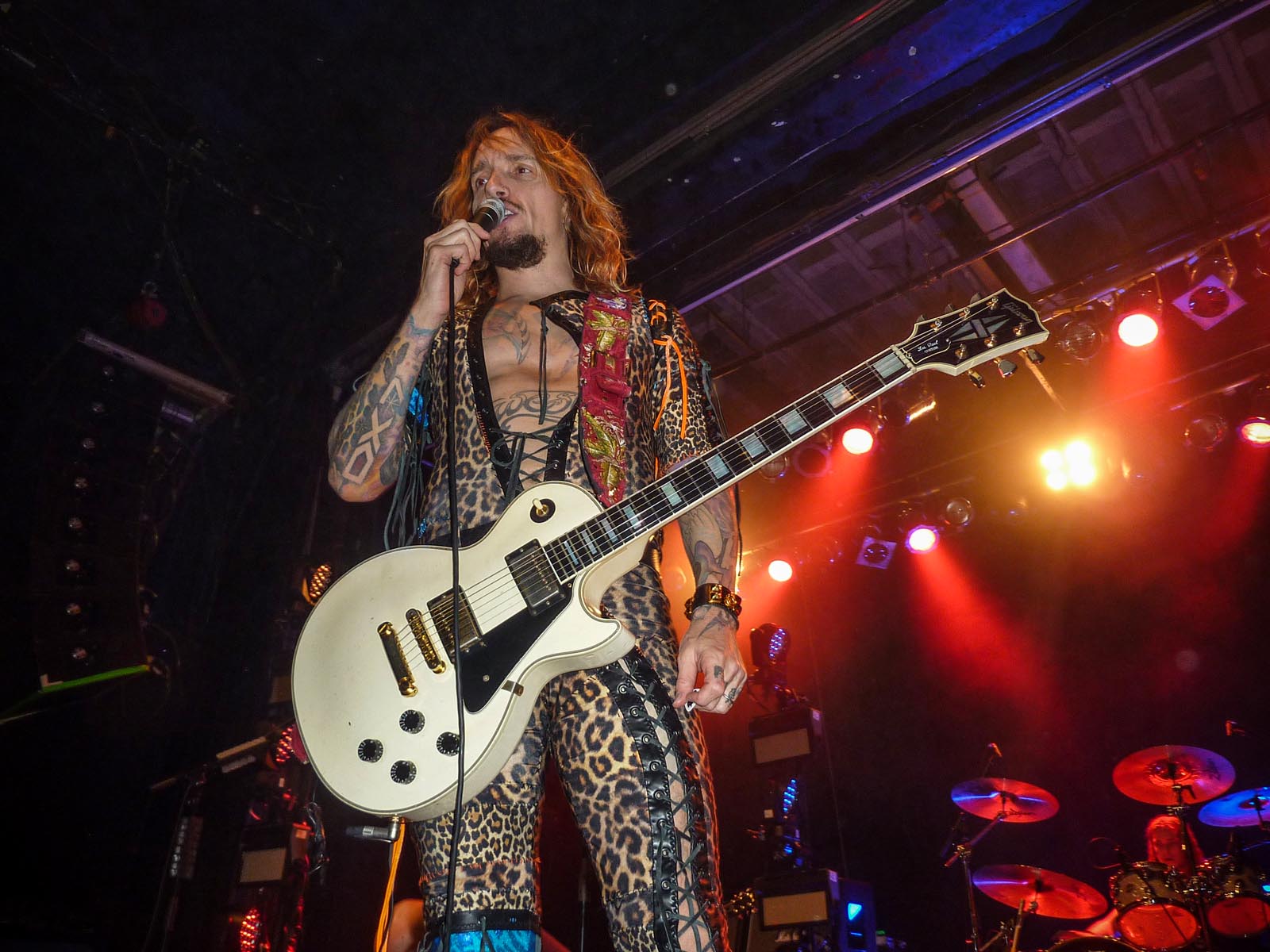 The pop-tinged “Friday Night” got screams of approval from the crowd, and in “Every Inch of You” Dan and Justin engaged in a quick blues jam and channeled their inner Malcolm and Angus Young – this slow burn number would easily pass as a bonus track of AC/DC‘s Powerage. On “Solid Gold”, from their latest album, there was also some serious singing help from the crowd, with its stadium-ready chorus and self-parody verses being belted out by everyone in the house.

At this point, Justin asked for a pause for everyone to appreciate the evening, and announces a one-two-three punch from their debut. One of those songs was dedicated “to everyone in the house who has a dream, which is an important thing at this stage of humanity” – its candid title is “Get Your Hands Off My Woman”, and it’s played at breakneck speed! The other two were “Stuck in a Rut” and “Growing On Me”, at which point Justin throws himself into the crowd while still soloing. Ever the charming and gentle frontman, he mentions also that “I live in a constant state of arousal, but in order to fit in this catsuit, I have to tuck my dick – you thought I had hemorrhoids, didn’t you?” I’ve heard many offensive, nonsense and crazy things in twenty years of attending concerts, but in all honestly I had never heard that one… For the encore, Justin comes back wearing nothing but his underpants and yellow boots, revealing a heavily tattooed torso. A perfect blend of Queen and Thin Lizzy, “Japanese Prisoner of Love” is played, and the show reaches its climax with “I Believe in a Thing Called Love”. On the last song “Love on the Rocks with No Ice”, the singer climbs the balcony and jumps into the crowd, only to be carried back to the stage and end the proceedings on a very high note.

Despite relying heavily on their debut album, the setlist flowed nicely, and had at least one song from each of their releases, including five from their latest one. If tonight was any indication, then it’s safe to say that The Darkness are back in full effect: as heavy, camp, exciting and quirky as ever, playing every show like they were in front of a sold out Wembley arena.

ENCORE: Japanese Prisoner of Love / I Believe in a Thing Called Love / Love on the Rocks With No Ice