The day began with the classic Florida weather of rain and sun at the same time but as the show time came closer the sky cleared. The door of Revolution Live opened at 7:00pm to receive the long line of fans that had been patiently waiting. The first ones to take the stage were the members of SHADOW OF INTENT, from Connecticut bringing their melodic deathcore sound that although young, felt very mature and curated. Though they have some clear deathcore tendencies in the vocal presentation, their musical proposal is more along the lines of a heavily technical and symphonic mode of melodic death metal that bears some degree of comparability to THE BLACK DAHLIA MURDER in terms of intensity and speed, but is otherwise fairly unique in American circles, nay, the entire metal scene at large. Their set included tracks from the Reclaimer album and their latest single “Underneath a Sullen Moon”.

After this initial warm up, AVERSION CROWN – a deathcore collective hailing all the way from Australia –  took the stage. The crowd got very excited throughout the set, and even though I was unfamiliar with their music, their performance brought great energy and they definitely made me want to check out their discography. A potent mix of brutal death metal speed and violence with eldritch atmospherics, audio manipulation and vocalist Mark Poida’s otherworldly vocal range and ability, they really made a delightful impact in the audience. Most of the songs they played are from their release Xenocide that came out on Nuclear Blast in 2017. 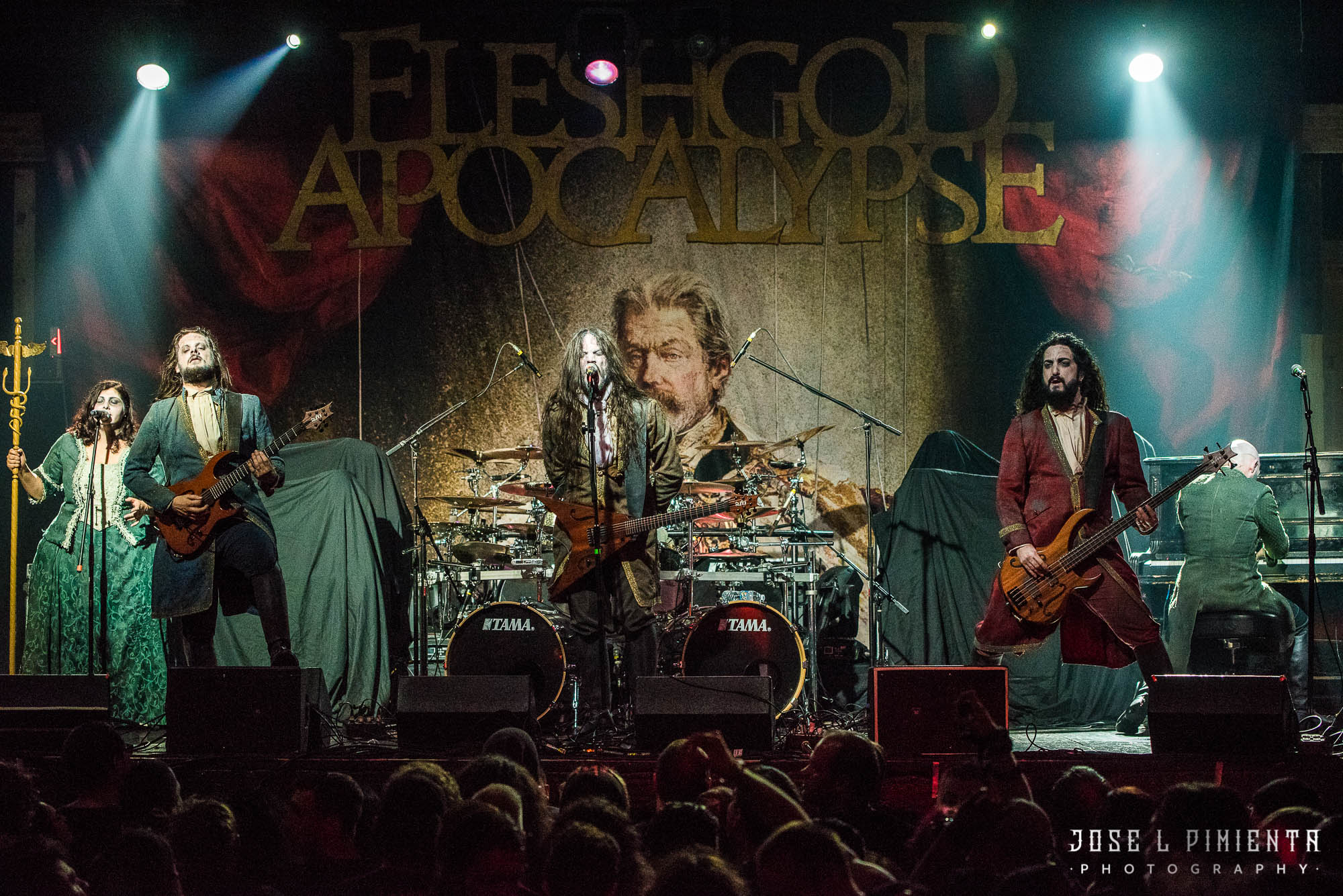 While waiting for the next act the classic music gave us a hint of what was coming next. The atmosphere turned darker and the death symphony started. FLESHGOD APOCALYPSE, took the stage with their dark Victorian look. Their symphonic technical death metal mix is clearly influenced by their Italian roots with the operatic voice of Veronica Bordacchini and the atmospheric and chaotic melodies courtesy of  Francesco Ferrini on the piano. Their setlist was a from the albums Agony and their already classic from 2016, King. It’s always a treat to see these guys play and I’m glad they keep pushing forward in spite of the setbacks they have encountered in the last couple of years. I would love to see a new album soon but if it comes as good as their latest one it will be worth the wait. 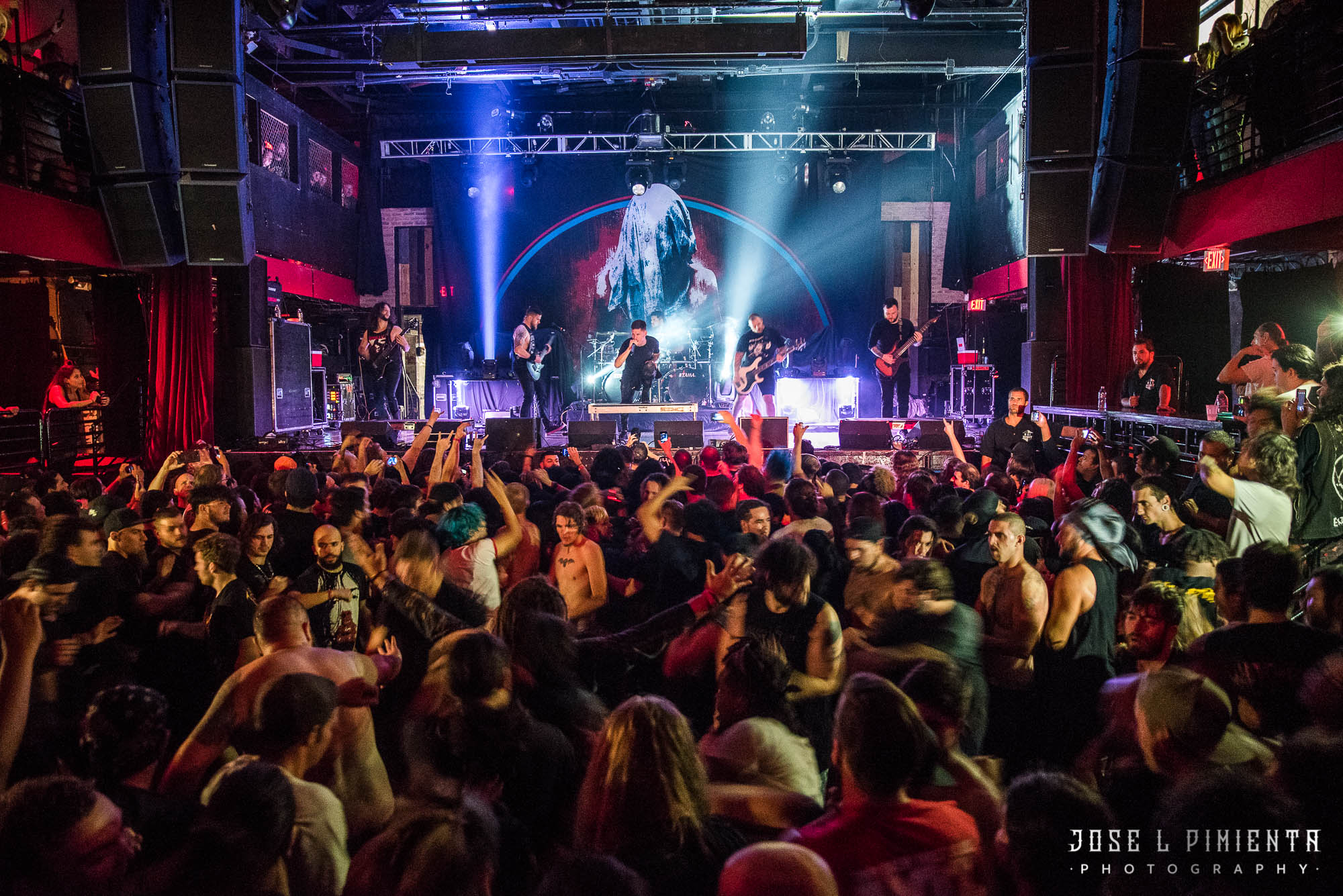 WHITECHAPEL, from Knoxville, Tennessee, arrived in the dark to meet the crowd chanting their name with a lot of excitement and death growls. They played their 2008 album This Is Exile that after 10 years it still stands as a deathcore icon in its entirety. “Father of Lies” got things kicking with a straight up death metal riff accompanied by a blast beat and the three guitarists added so much atmosphere to the overall heaviness throughout. A common problem with deathcore bands is they can’t do a single decent guitar solo, but that’s not the case with WHITECHAPEL. I have been to lot of crazy shows but the crowd I saw during this time of the night was extremely brutal, it went from circle pit to wall to wall mayhem! With 3 guitars, a bass, blasting drums and powerful vocals accompanied with extremely atmospheric guitar passages, they without a doubt classify as one of the heaviest American bands from the last decade. 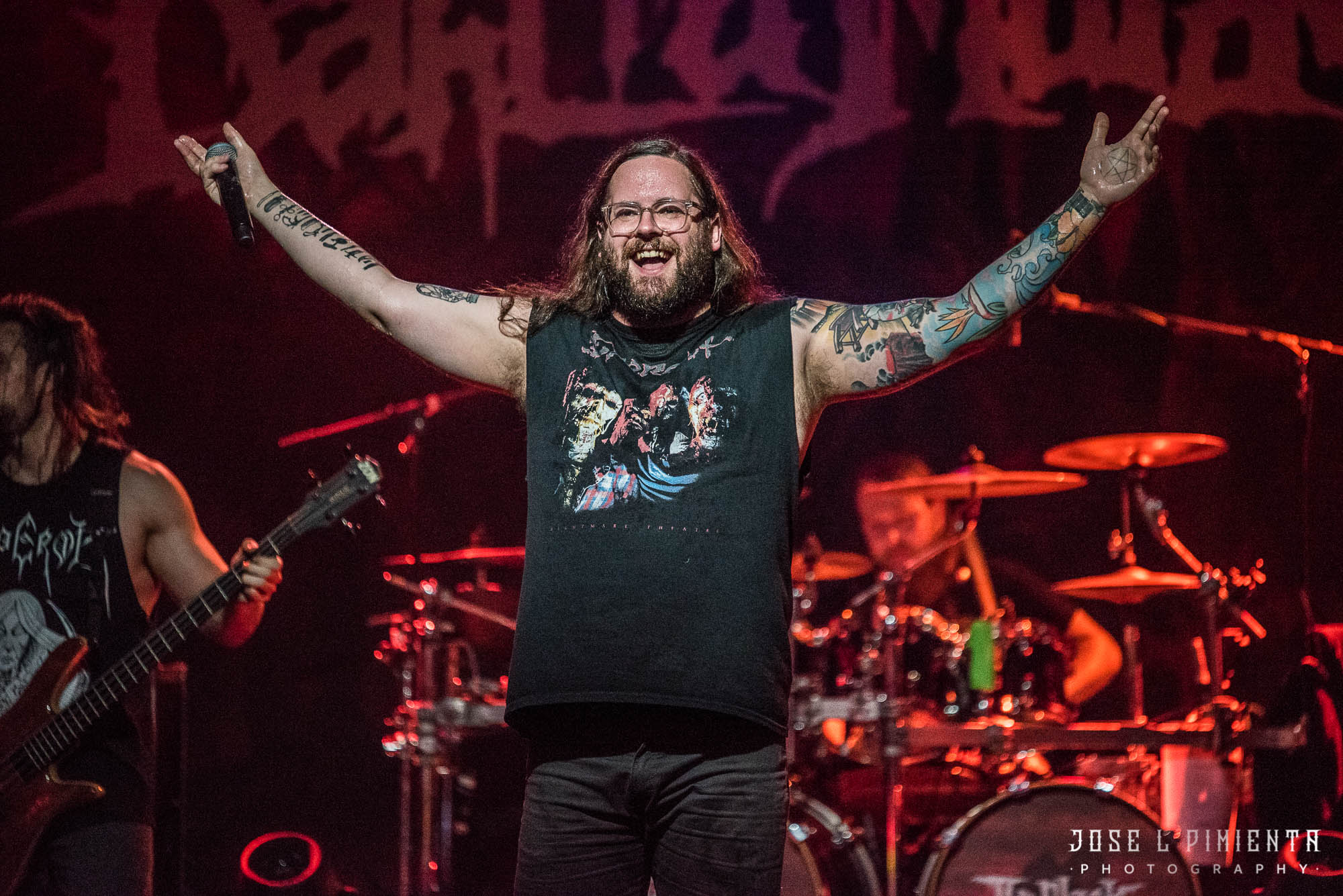 THE BLACK DAHLIA MURDER, from Detroit, Michigan, came to close the night in front of a packed house that were already full of adrenaline to turn up the heat even more with their latest record Nightbridgers plus a couple more of their hits. Although repeated lineup changes have plagued them since it’s inception, they have amassed themselves a reputation for incredibly consistent, unfathomably technical, and overall excellent releases, no matter the lineup on any given album, with Nightbridgers arguably becoming the highest point in their career. I have seen them play before and I’m glad to say they never disappoint. Their melodic death metal reminds me of the classics of the genre CARCASS and AT THE GATES but with a unique approach, it hits you like a speeding truck with  sheer brutality, yet the  speed goes hand in hand with the incredible ear-melting melodic/technical guitarwork , while Trevor’s vocals and charisma on stage fuels the crowd to keep the moshing going till the end. THE BLACK DAHLIA MURDER is definitely among the more consistent purveyors of the millennium melodic death metal, their solid mixture of riff-driven ferocity and monolithic stage presence forms a relentless musical machine, worthy of the hype and praise it has garnered already.

As a fan I appreciate the energy and the stress discharge delivered by the bands throughout the night and I would recommend to catch this tour as they continue across North America. You’ll be served a brutal night of international metal that will linger in your senses for days!

This Is Exile: Father of Lies / This Is Exile / Possession / To All that Are Dead / Exalt / Somatically Incorrect / Death Becomes Him / Daemon (The Procreated) / Eternal Refuge / Of Legions / Messiahbolical

Nightbringers: Widowmaker / Of God and Serpent, of Spectre and Snake / Matriarch / Nightbringers / Jars / Kings of the Nightworld / Catacomb Hecatomb / As Good as Dead / The Lonely Deceased

Encores: Everything Went Black / What a Horrible Night to Have a Curse