SLAYER‘s Farewell Tour crushes Atlanta: Over six hours of pure metal sends SLAYER out in the only way it could be done.

Ok, I’ll admit it. I was never really much of a SLAYER fan back in the day when thrash metal started. Of the “Big Four” thrash metal bands I was always an ANTHRAX guy, then later it was METALLICA. SLAYER s dark image, lyrics and music scared the crap out of me, but over time my thinking changed as I began to understand their musical contribution and influence in the scene, and the die-hard devotion showed by their fans. SLAYER has a bond with their fanbase like no other. At the band’s final Atlanta, GA tour stop at the Cellaris Amphitheatre at Lakewood, I saw a ton of SLAYER tattoos among a sea of black SLAYER t-shirts. I witnessed two guys jumping up and down and hugging each other, screaming “SLAAAAYERRR!” at the top of their lungs. People were losing their minds, head-banging, moshing, crowd-surfing and having a blast, giving it up one last time for one of the most influential metal bands of all time. Much like RUSH’s fantastic R40 Tour from back in 2015, (what we can only assume will be their last tour), SLAYER is calling it a career at the top of their game with an absolute spectacle of a show. The combination of their ripping, aggressive music, monstrous stage show, and stellar opening bands make this tour one that any metalhead should not miss. 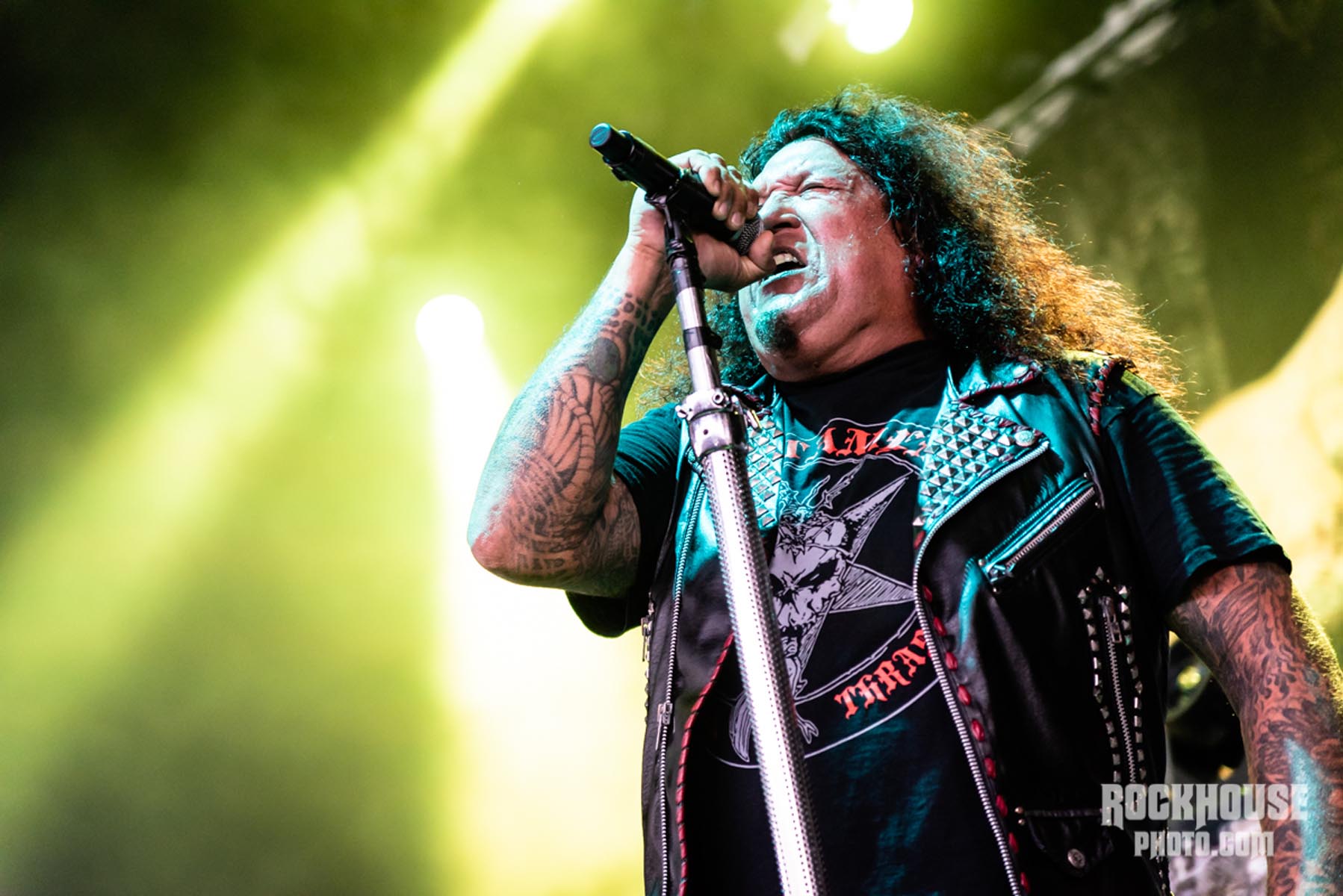 Chuck Billy preaching to the brotherhood of metal

SLAYER have also done what anyone would expect from them: bringing together a line-up of some of the best metal bands in the last 100 years. LAMB OF GOD, ANTHRAX, TESTAMENT and NAPALM DEATH (Replacing Polish dark lords BEHEMOTH which took part in the first leg of the tour, which we covered in this article). I’d need a very few pages to describe each band’s performance on stage: TESTAMENT brutal and sensational – despite a bit short – setlist, sprinkled by the insanely intricate drumming of Gene Hoglan, the groove and feeling of Eric Peterson‘s guitars, the iconic singing of Chuck Billy, who by the way is singing better and better as time goes by, and the mind-bending solos of guitar extraordinarie Alex Skolnick, set things in motion the perfect way –  better so, the metal way. ANTHRAX came on stage after them, and led by Scott Ian thrashing away on his guitar with his inimitable style, Frank Bello‘s frantic headbanging while mercilessly pounding the four strings, and Joey Belladona vocally superb abilities paired with his unique way of commanding the crowd – even engaging with the photographers –  led the band to tore through a setlist of timeless thrash classics where staples like their ever-present mosh anthems “Indians,” and “Caught in a Mosh” turned the front rows into a mass of frenzied human bodies. 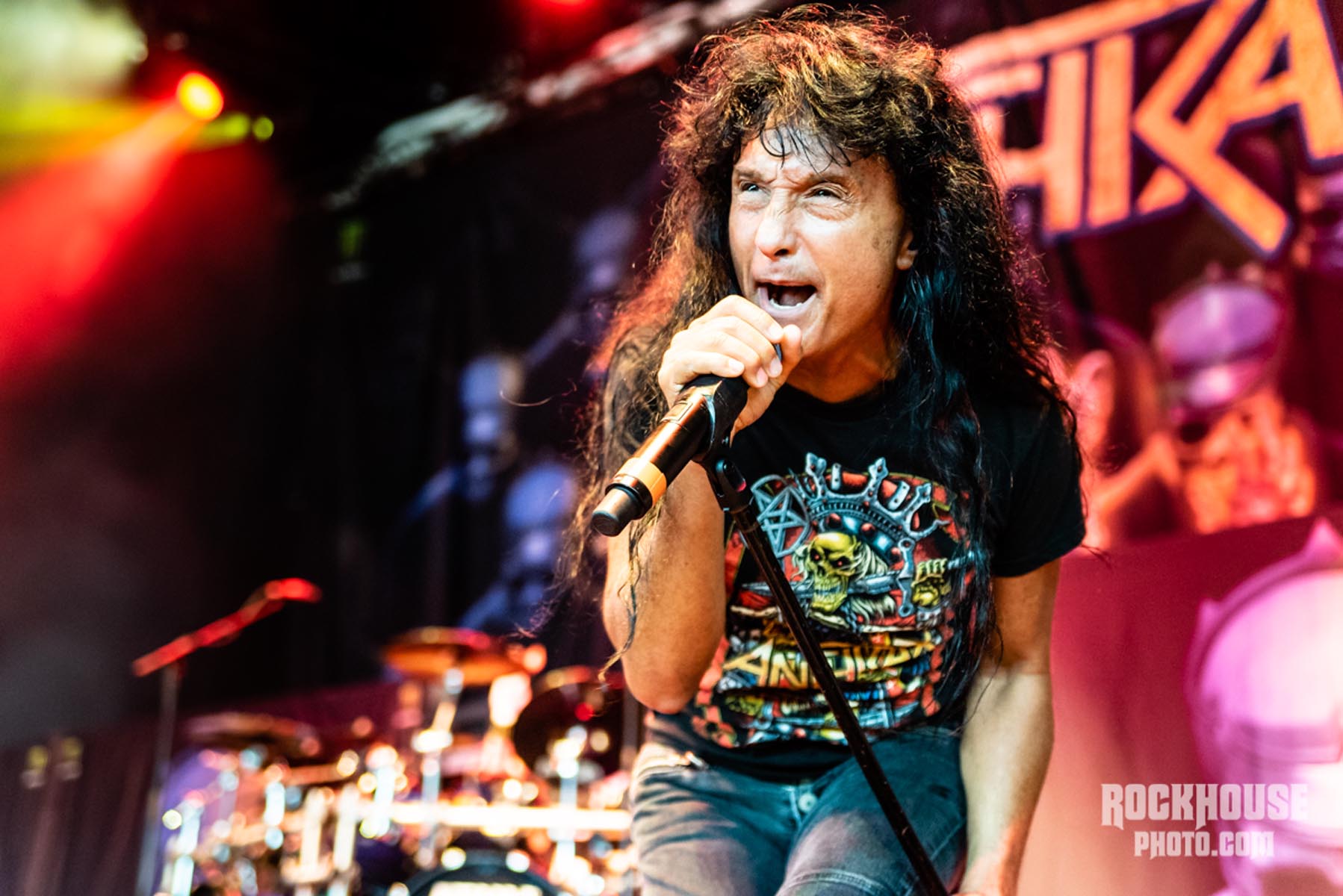 And less than half an hour after ANTHRAX had abandoned the stage, the relentless and ear-shattering musical collective known as LAMB OF GOD took over, to make sure the body of metaller in attendance was properly marinated in metal madness. If you are not in good physical shape, believe me, you don’t want to be in the crowd when Randy Blythe and his comrades turn the heaviness knob to 11. I’ve seen moshpits tons of times before, and the one they provoke is a thing to behold. High flying jumps, screams from the depth of hell, the audience exploding left and right with each song, these guys elevated the atmosphere to an apocalyptic level in which it seemed like an ergot-induced mania had swept through the crowd, rendering a pervasive irrationality. There is something pleasingly diabolical and downright menacing about a LAMB OF GOD show – that is truly electrifying to be a part of – and the way Blythe concocted and controlled the whirling death-pit of moshers harkened me back to the images of Orcs prepping for war in Mordor under Sauron’s vigilant eye. It is an unsullied juggernaut, which turns into almost an unreligious experience.

Then it was the time for celebrating one of the greatest metal bands of all-times, for many the greatest of them all. Musically, SLAYER were what you would expect – fast, agressive, relentless. No pretty ballads from this band. Founding members Tom Araya and Kerry King stood side by side on stage as they have since the 80s, pounding out now classic material like “War Ensemble,” “Seasons In The Abyss,” “Raining Blood” and “Angel of Death.” Guitarist Gary Holt spent his time on stage shredding like a maniac, proving himself a very worthy replacement for the gone but never forgotten Jeff Hanneman. Drummer Paul Bostaph, in between dodging flamethrowers, spent most of the night hidden out of sight behind his massive kit. 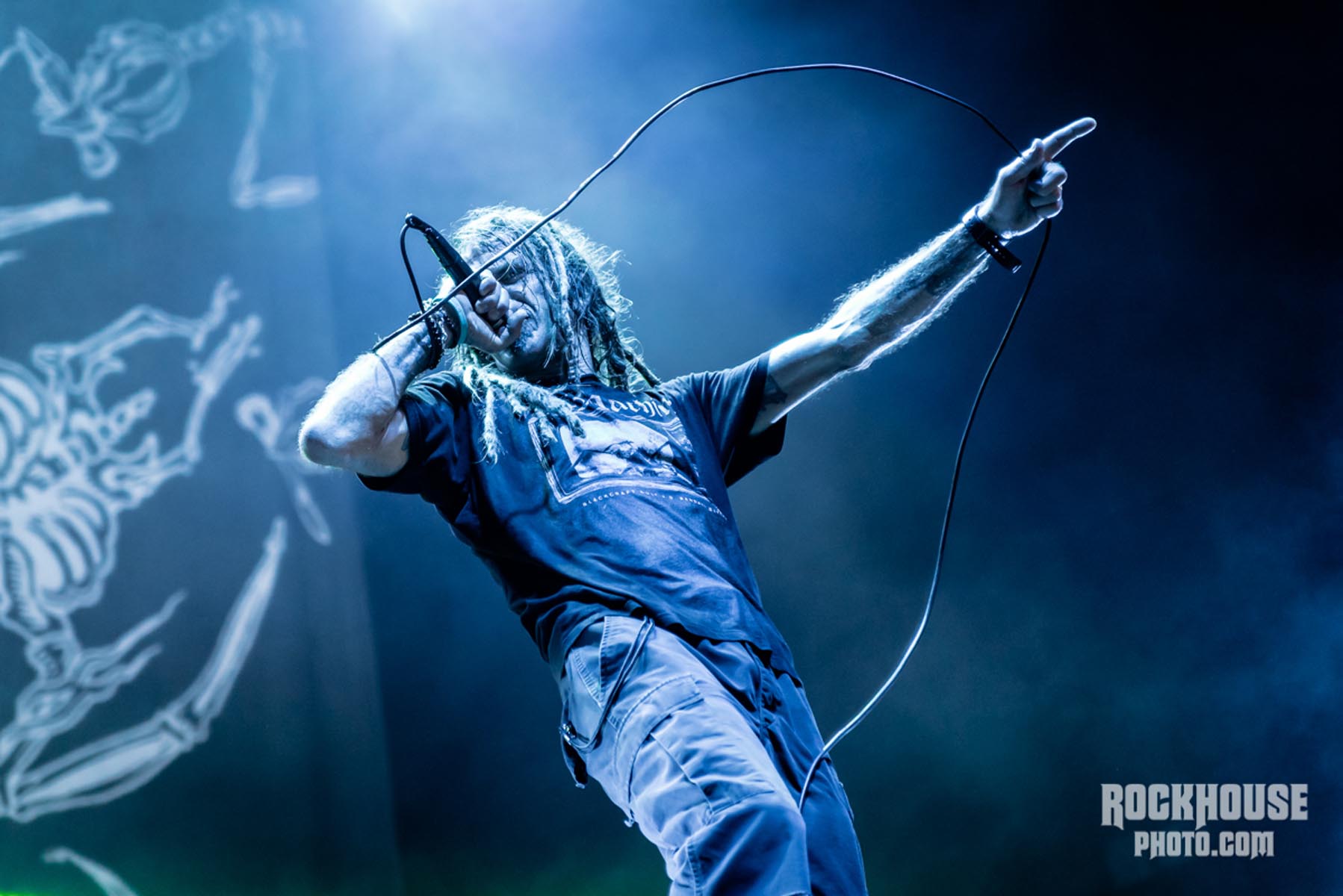 So, about that monstrous stage show. This was, by far, the largest amount of pyro that I’ve ever seen used in a live concert setting, the most interesting of which was a series of rotating flamethrowers that sat behind each bank of speakers and shot flames into the air in a variety of directions and patterns, making the flames look like they were dancing. Have you ever accidentally dropped a garden hose when the water is on full blast, and the nozzle starts to fly around from the pressure? Ok, now think of that same scenario…but with fire. Several times, the flames crossed paths and for a brief moment formed an inverted cross. Ok, c’mon… how metal is that? In addition to the fire cannons, there were matching metal SLAYER logos on stage left and right that would go up in flames every now and then. And if that wasn’t enough, there was a bed of fire on top of each bank of speakers so when they lit the place up, it looked like a bomb had gone off. I’m not sure how drummer Paul Bostaph didn’t get completely fried back behind the kit since he was sitting in the middle of all of it.

The overall lighting design was very tastefully done, with each song having a predominant color (mostly red, green and blue), and that color was accented with white rotating lights high up in the scaffolding. The lighting was also tightly synchronized with the music, adding emphasis and directing your eye. The backdrop behind the band changed several times during the show to keep things fresh, including banners that glowed in the dark. When the lights went dark at the end of a song, the logo glowed. Terrific touch. 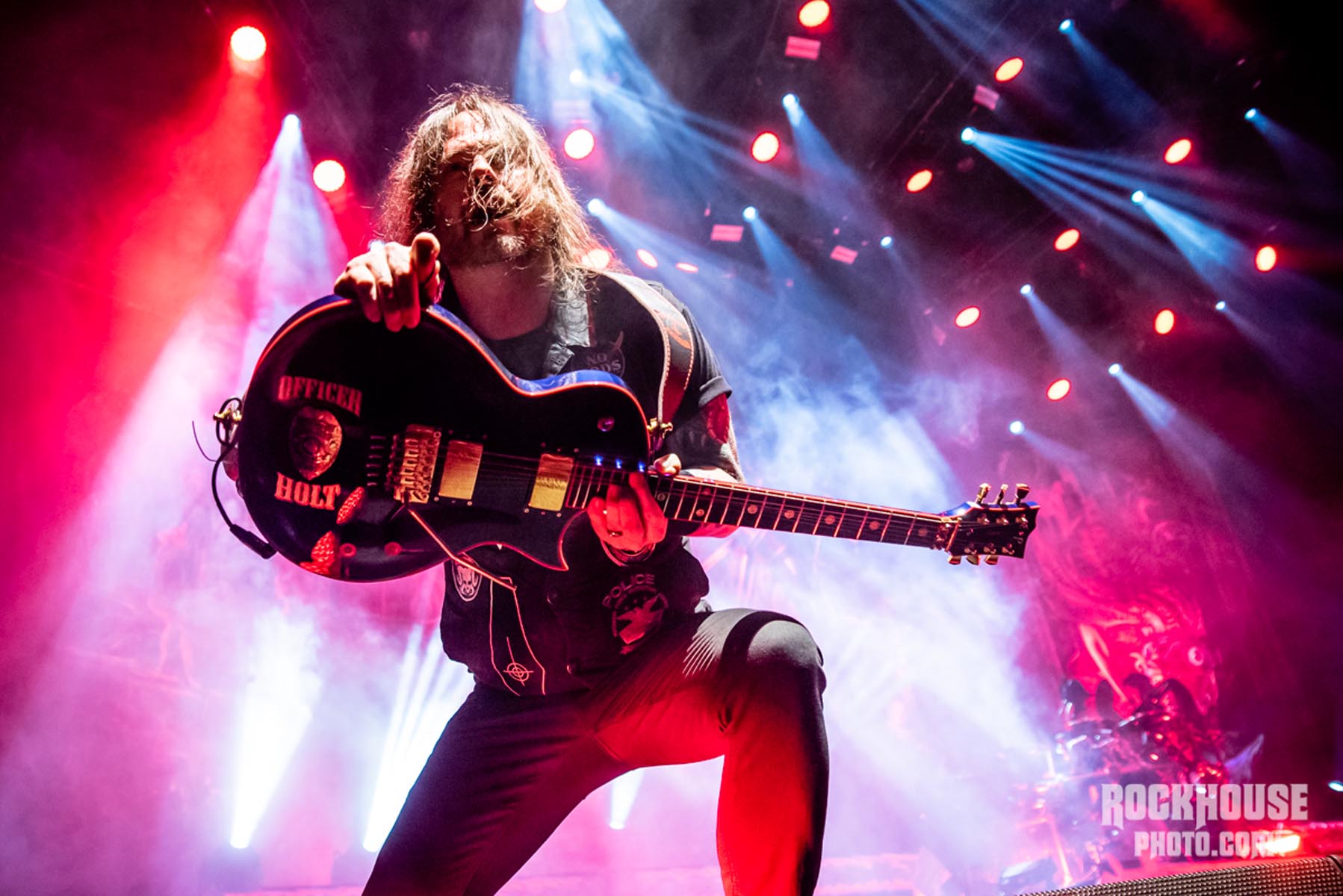 Gary Holt wading through the seasons in the abyss

So, if a massive stage show and a career-spanning setlist isn’t quite enough, maybe the four other bands that SLAYER brought out on this tour – LAMB OF GOD, ANTHRAX, TESTAMENT and NAPALM DEATH – will offer you something more? Seriously folks, this is over six hours of head-banging thrash metal. If you’re planning on attending this tour do yourself a favor and be sure to get plenty of sleep and eat your Wheaties…you’re going to need the energy to survive.

Caught in a Mosh / Got the Time (Joe Jackson cover) / Madhouse / Be All, End All / Evil Twin / Antisocial (Trust cover) / Indians