California based rockers, Tesla, performed at the Mayo Performing Arts Center in Morristown, NJ on September 11th, and they were truly in a mission to shock and awe. This headlining tour is in continued support of their latest CD release, “Shock”, and they are just coming off a Summer tour opening for Def Leppard. When opening for Def Leppard, they only had about 30 minutes of stage time but now as a headliner they have 90 glorious minutes. The band consists of Jeff Keith [vocals], Brian Wheat [bass], Frank Hannon [guitar], Dave Rude [guitar], and Troy Luccketta [drums].

Tonight the band got back to basics with their hard-driving brand of “riff rock” and blazed through the perfect combination of songs opening with a powerful song from their new CD, “Tied to the Tracks ,” then dove into songs like “Modern Day Cowboy,” “Heaven’s Trail,” and “Miles Away,”

When the magic of writing great riffs have eluded many great bands, it clearly shines strong with Tesla. The band incorporated four new songs from “Shock” into their set; the title track “Shock,” “Tastes Like,” and “California Summer Song,” as well as the opener, “Tied to the Tracks.” Prior to the show, I asked Frank Hannon how Tesla’s music has always merged hard rock with a commercial sense of melody? He replied: “We have five different elements in the band but the one common denominator which has always been melody. All of us have different input, but ultimately the songwriting and song structure is at the core of what we do. We may have one song that sounds jazz while another rock out and another has a metal influence. Regardless of the style, they always have a melody and positive lyrics.” 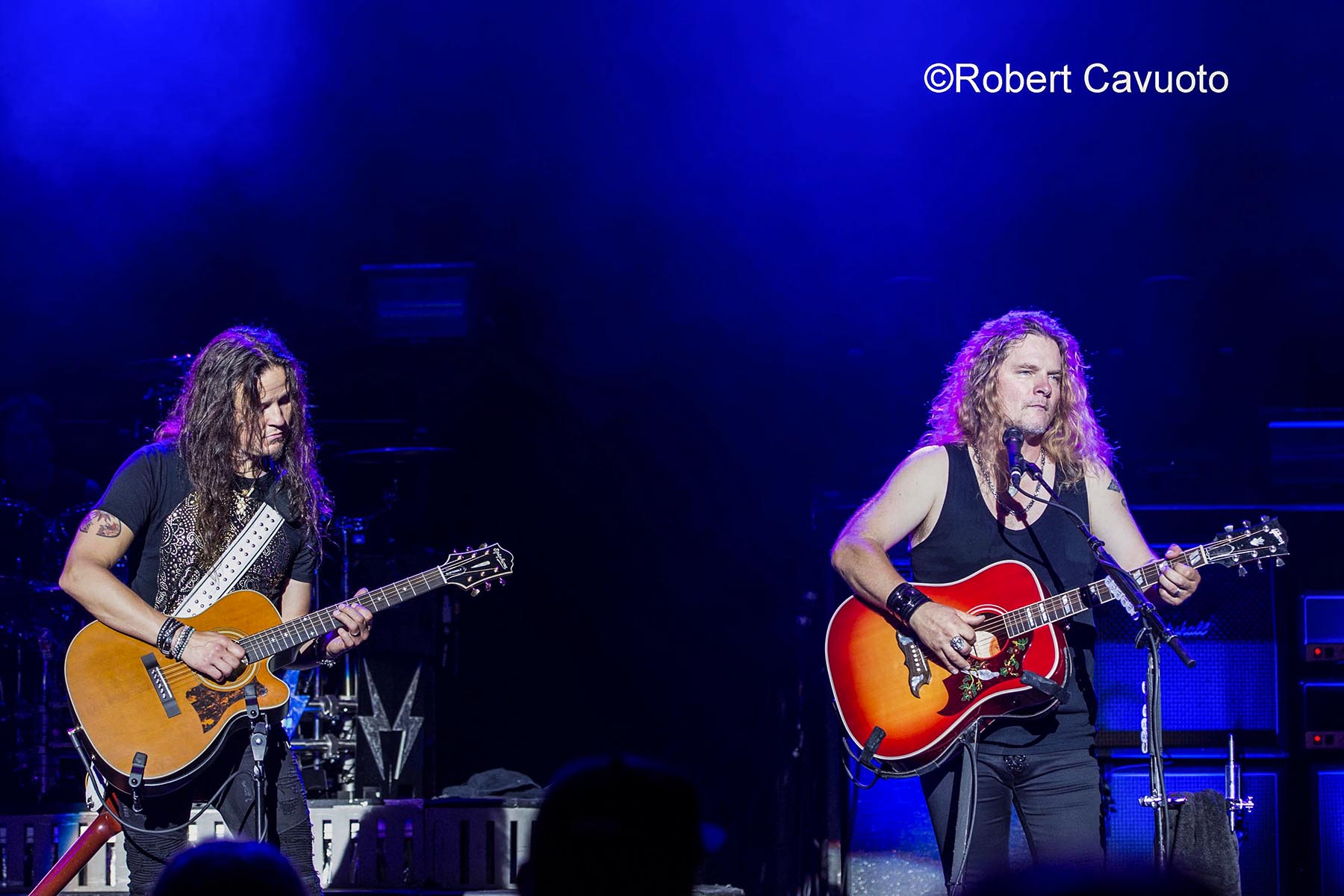 Dave Rude and Frank Hannon on stage with Tesla

Anyone who came to the show got just what they expected – an unstoppable wall of guitars! Dave and Frank are two of rock’s pivotal guitarists, and their chemistry is the secret to the band’s success. Their playing style complemented each other as well as the songs which was evident during the dual barrel leads for “Modern Day Cowboy” and “Little Suzi.” Each guitarist took center stage for their extended guitar solos and put on a searing pyrotechnic display using their arsenal of guitars.

Three-quarters of the way into the set, they performed some songs off “Mechanical Resonance” like “Gettin’ Better” and “Changes.” “Love Song” was performed with Dave and Frank on stationary acoustic guitars to ensure the guitar’s beautifully rich intro came across perfectly then rolled straight into “Little Suzie.”

Vocalist, Jeff Keith looking tan and in shape was full of energy. A charismatic front-man who sang each song with big smile, his unmistakably soulful and raspy voice cut through the band’s heavy guitar-driven sound: a powerhouse vocalist that never seemed to tire. He hasn’t lost an inch of his trademark voice since the inception of the band’s career. Rhythm section wise, drummer Troy Luccketta pulverized his drum kit into submission while Brian Wheat, who was perched on the drum riser most the night, played nicely in the pocket and tossed picks into the crowd as well as handled backing vocals.

Tesla closed the night with “Signs” using whatever energy they had left. Both band and crowd were hell-bent on having a great timing and the performance was a warm welcoming for Tesla back to New Jersey. Here’s hoping that doesn’t take them too much to return.