Considered one of the most sublime exponents of modern rock guitar, Steve Vai has played with many of rock’s heavyweights, whom we don’t even have to mention here. What is there that could possibly be said about him that hasn’t already been said? He’s an innovator and a showman, and arguably unlike any other guitarist in the world when it comes to technical prowess. While many musicians fit easily into a single category, Steve Vai’s own musical vision irradiates so much energy, brainpower, passion and ultimately talent that you can only be mesmerized when witnessing one of his shows. And the spectacle he offered at The Parker Playhouse, a wonderful venue located in the Fort Lauderdale area, was one of the most genuine expressions of virtuosity and sense of musicianship I’ve ever had the chance to enjoy.

We arrived to the venue in the early afternoon, as my wife and myself had the chance to take part in the VIP Experience Vai has been offering as part of his tour commemorating the 25th anniversary of his landmark album, “Passion and Warfare”, which included the opportunity to sit with Steve in an intimate Q&A session. That sessions was a delightful experience. Steve sat down with all the presents and talked, joked, and laughed for nearly an hour; sharing insights in a very natural and humble way, while going into every detail possible in his answers. He gave advice and suggestions and when asked whom would be the musicians (alive or dead) he would love to work with, he named Devin Townsend and Igor Stravinsky without the shadow of a doubt. After the Q&A session was over he proceeded to sign and take photographs with all the attendees, and shortly after we were given the chance to enjoy the soundcheck, in which he was joined by his band and played for around 30 minutes before waving everyone goodbye and disappearing backstage. 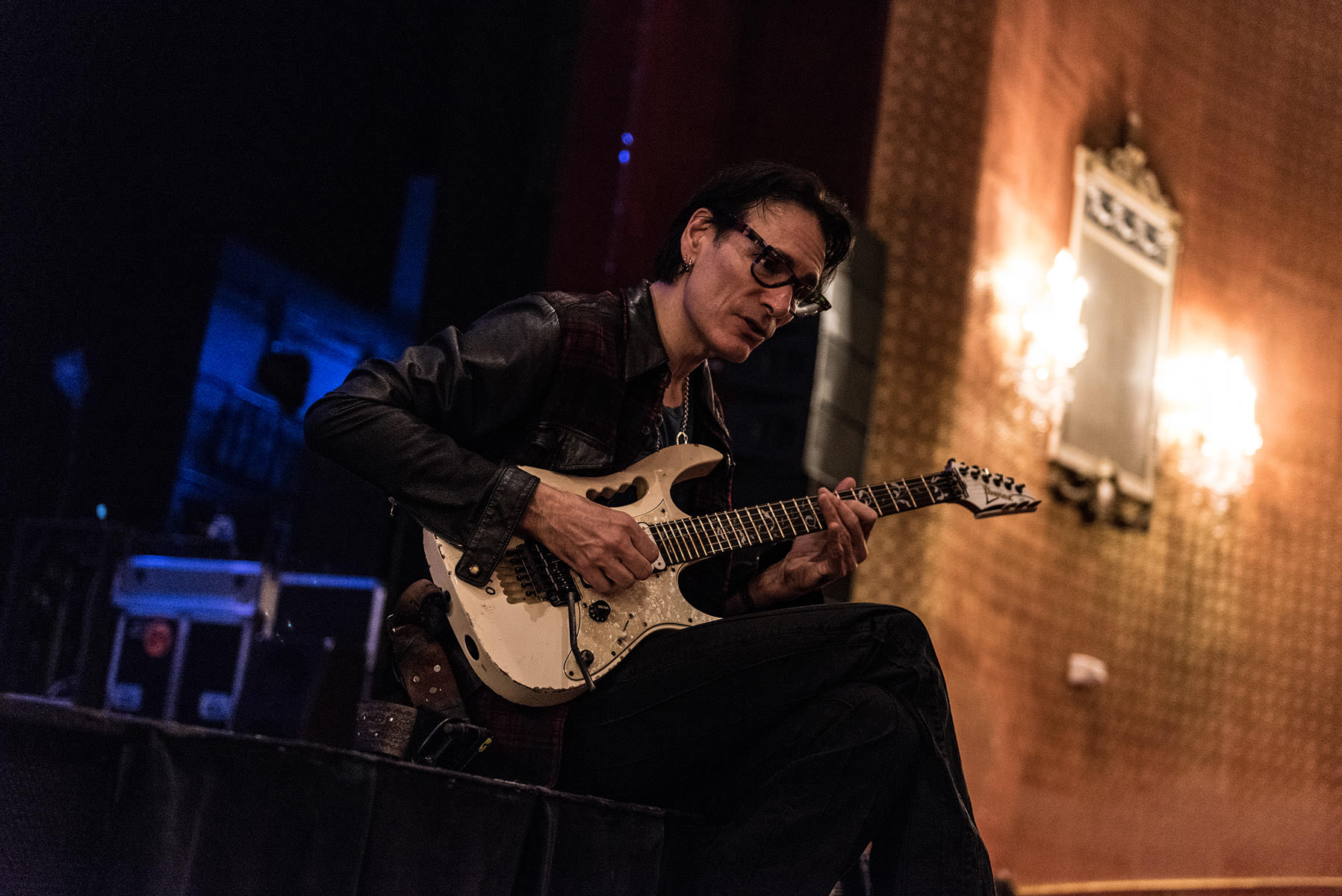 Steve Vai explaining some guitar licks during the Q&A session

After the VIP session was over I was given the chance to come on stage and receive a tour, guided by none other than Frank Trzaskowski, Steve’s own tour manager and FOH sound engineer. He handed me some broken guitar strings and said: “These have Steve’s DNA on them, so technically in the future you can clone him using them”. What do you do when you have Steve Vai’s guitars at your disposal and you are standing up there where he will be just a couple of hours later, listening to detailed explanations about how he uses his pedals and effects and how his guitars are tuned? I was bewildered to say the least, but at least I managed to take some fun pictures. 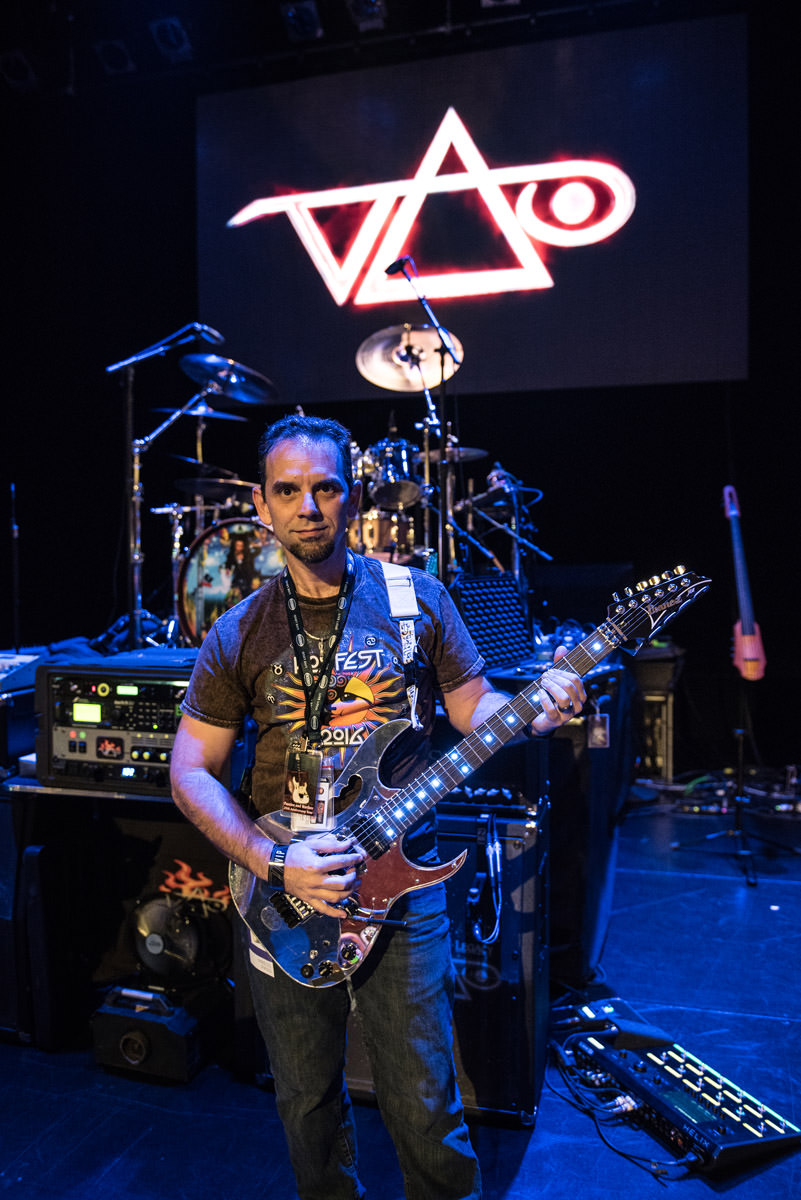 Me playing with Steve Vai’s guitar

After such an exceptional time we exited the room and waited for around 20 minutes for the doors to be officially opened. The venue was crowded, but there were still empty spots in the back, even though there’s no such thing as a bad seat at The Parker Playhouse. Approximately 10 minutes after 8 PM the lights dimmed and the infamous guitar dual scene from “Crossroads” started to play on the massive screen behind, provoking a clamoring ovation cheering from the crowd . Suddenly the light went down and Steve Vai finally appeared on stage wearing a white hooded sweatshirt and glowing neon sunglasses with a solid haze surrounding his every move and light beams coming out of his Ibanez Jem guitar, in a true Middle Earth’s character fashion. Without hesitation the band jumped headfirst in the fun, starting with “Bad Horsie” the 1995 classic off of the Alien Love Secrets EP; while the excitement level in the audience pumped to the roof. I took a quick look around and saw the venue was now packed, not single seat was empty.

There is enough uniqueness in Vai to make him original and there is enough talent to put him in his own league. And both were perfectly at display while other fan-favorites like “The Crying Machine”, “Gravity Storm” and “Tender Surrender” made their appearances, immediately followed by the customary band introduction of Dave Weiner on second guitars, Jeremy Colson on drums and Philip Bynoe on bass. Then Steve ditched all the neon stuff, changed his guitar and it came the time for Passion and Warfare. Unlike many of the heavy metal guitar albums of the era, Passion and Warfare impressed with its adventurous diversity as Vai explored a variety of sonic landscapes; and maybe because of being packed with overdubs and extensive sonic layering it was never played live before. However, this time around nothing could stop Steve from taking the crowd back in time, while weaving melodies with the greatest finesse of a sleight of hand. Watching him revisiting those familiar tunes I’ve listened and enjoyed for decades just made even clearer for me that he already passed the stage of shredding blistering solos and now wanders in the zones of ultra high and ultra low with very peculiar guitar sounds, testing the boundaries of his instrument and the listener’s imagination. At the beginning of “The Answer” Steve was virtually joined by his former teacher and now dear friend Joe Satriani, who congratulated him from the immense video screen and traded insane licks back and forth with Vai like they have done dozens of times during the G3 tours. The set was divided in two parts, with the first one ending with the ethereal “For the Love of God”.

After a fifteen minutes intermission the band reappeared on stage, and picked off where they had left off, while the popular MTV video for “The Audience is Listening” played in the background; but half-way through the song another virtually invitee appeared in the back: John Petrucci. The Dream Theater’s axeman joined Steve in another breathtaking guitar pyrotechnics duet, paired with luscious and extraterrestrial guitar tones. The album’s songs kept flowing and yet another guitar maestro paid visit; this time the probably less known but equally fantastic guitar artist Tommy Emmanuel, of whom Steve said is one of the most inspired acoustic guitars players he has ever seen. The two delved into an equally parts electric/acoustic wonderful rendition of “Sister”, after which “Passion and Warfare” closed with “Love Secrets”, described by Steve as a song he never expected to play live. With everyone on their feet applauding and cheering Steve said “And it can’t be a true retrospective career for me without some Frank Zappa!”, and the screen roared with the video of “Stevie’s Spanking”, passing images of his visionary mentor and friend Frank playing on stage with a teenager Vai, while he made his guitar scream, combined with a true carnival of thundering bass lines and deafening and chest-pounding drums. And to close the night on an impossible note he switched guitars once again, began playing “Taurus Bulba” from his album Fire Garden and descended from the stage right to the front row, stood in front or my wife and tilted his guitar for her to strum the strings (She was so surprised she didn’t even know what to do). Then he continued walking, passed by me and approached another woman in the front, took his guitar off and put it on her and continued playing it from behind her body, while she raised her hands in the air, blushed and smiling from ear to ear. He returned behind the references, held his guitar in the air holding it by the whammy bar and shouted “One more note!” and played a last one catatonic avalanche of sounds as his last sonic statement.

Surrounded by endless shouting and applause the whole band came up-front and bow down several times, and then Steve took the mic and humbly thanked the audience for coming out and hoped they enjoyed it the show. From the opening, right to the very end of the show, Steve held his audience in a way that only Steve Vai can. It is hard to find adjectives to describe him; I guess is better to say he remains unclassifiable. Gifted with the ability to sculpt harmonious sounds with infinite creativity and technical mastery, he’s a musical alchemist of the highest caliber.