Steve Hackett is one of several geniuses that surfaced in the late sixties and early seventies shaking the wool of progressive rock at a very young age. Despite being overshadowed by Phil Collins and Peter Gabriel in the prime years of Genesis, Steve Hackett is indeed a master statesman of progressive rock, and he played a pivotal role in the formation and development of the band, his unique style helping to shape the sound that characterized Genesis and gave them the iconic status they still have nowadays. He continues to produce accomplished new music to this day, and his last album release entitled Wolfight saw the light of that last year. His solo albums are enjoyable, varied, and mostly untainted by the trappings of commercialism. It’s clear to me that he is still around because he’s a talented musician who enjoys writing and performing songs. He could have quit many years ago, but his passion for the craft continues to enlighten. At the same time, he is the only former Genesis band member who includes their 1970s songs in his set list, even playing a show made up exclusively of those classics, as part of his Genesis Revisited albums and tours.

Four years ago, Steve Hackett released the anticipated sequel to his 1996 studio album Genesis Revisited, which showed the renowned musician revisiting a compilation of songs spanning throughout his seven year venture with the band. Although I have several of their CDs and vinyl, I never had the opportunity to see Genesis back in the Peter Gabriel/Steve Hackett eras (I was not living in a free world but imprisoned by the communist dictatorship of my homeland Cuba), so I decided to break free from that curse by attending his concert at The Plaza Live in Orlando, as part of his 2016 Acolyte to Wolflight with Genesis Revisited US tour. With such a suggesting name, the aforementioned tour promised to be a career-spanning night to remember, but I have to say I did not suspect it would be as magical and stunning as it actually was.

My wife and I had the pleasure to meet with Steve briefly at the Meet & Greet before the show – pictures, autographs and pleasant conversation, where he was the perfect English gentleman, very personable, friendly and understated. The Plaza Live is a rather small and intimate venue which impressed us favorably, being our first time visiting it. The spectacle was scheduled to begin at 8:00 pm and only five minutes after that time Steve and his band appeared on stage for the delight of the audience which received him with a thunderous applause. Steve took the mic and explained the night would be split in two sets, the first set consisting of solo material, ranging from his 1975 solo debut Voyage of the Acolyte to several selections from Wolflight his latest release. Following a 20 minutes’ intermission the second set would focus on Genesis songs from the Peter Gabriel era. He graciously said he hoped everyone would enjoy the show and with no further delay the initial chords of “Corycian Fire” filled the air waves. It was the beginning of a 3 hours’ spectacular journey through the musical career of a consummate musician. 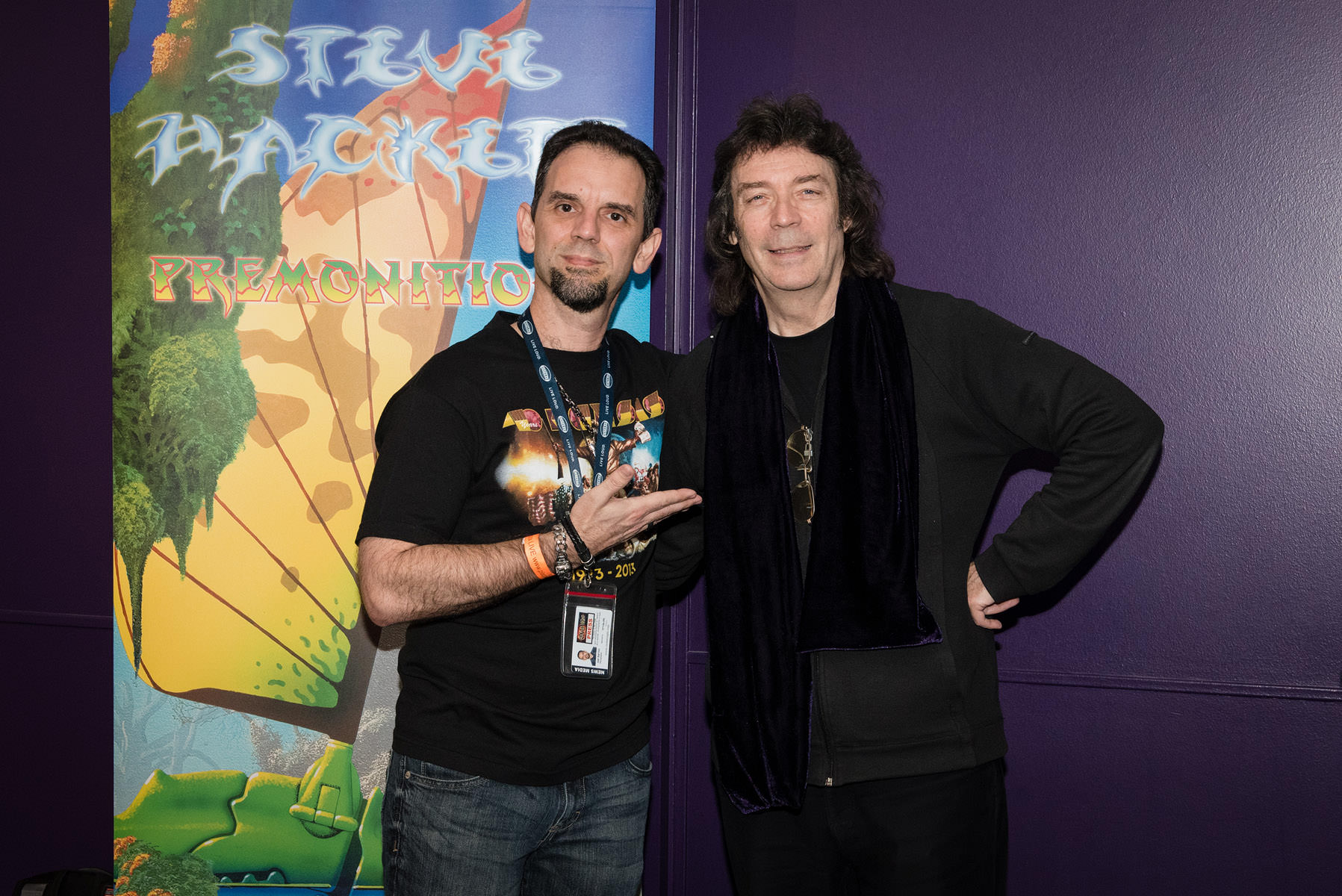 Steve Hackett and I before the show

I don’t think our experience can be put into sentences, it is something my readers would only understand if I could take their hands and transport them back to that night. From the 100+ concerts (mostly rock and fusion) I have attended over the course of the eight years I’ve lived in the US, this counts under the top 5. First, the venue lighting and sound were perfect, allowing everyone to captures all the nuances of the music being performed in front of our eyes (And also letting me grab some very cool pictures). Second; the man himself. Hackett is an inventive guitarist with a broad stylistic palette and his violin-like guitar sound –paired with his two-handed tapping of the strings, and string harmonics– captured all your senses and immersed you in a pure state of prog-rock levitation. Third: Steve’s band was stellar – bassist/guitarist/12-string guitarist Roine Stolt, (The Flower Kings, Transatlantic, Kaipa and Agents of Mercy) singer Nad Sylvan, keyboardist Roger King, saxophonist (and the man responsible for manning the bass synth pedals so essential to the Genesis sound) Rob Townshend and drummer/harmony singer Gary O’Toole – all of them (with the exception of Nad Sylvan who only appeared in the second set) played their hearts and souls out in a bombastic, dramatic, rich, varied, jaw-dropping and overwhelming in its power and beauty, 12 songs – one and a half hours– set closed by the mind-blowing and incredible fan’s favorite “Shadow of the Hierophant” after which the whole venue jumped to their feet and cheered for more than 5 consecutive minutes, even after the band had disappeared backstage.

The 20 minutes’ intermission seemed like a real eternity, but all of a sudden the lights went out and the crowd was abruptly brought to their feet following the first guitar notes to “Get ‘Em Out by Friday” The entire band was swiftly found firing on all cylinders throughout the Foxtrot classic, followed by another tune coming off the same album: Can-Utility and the Coastliners. By that time vocalist Nad Sylvan had make his appearance on stage. It is crucial to possess a confident front-man when you advertise the portrayal of a collection of memorable favorites onstage; this is a statement which becomes even truer when you’re dealing with songs originally represented by the vocal talent of Peter Gabriel and Phil Collins. Perhaps most accurately described as a cross between the two voices, Nad Sylvan’s familiar approach helped attribute a further degree of authenticity to the Genesis’s classics performances. I hear that people either love him or hate him, I am definitely in the positive category – he seems to bring a very fresh and individual approach to the vocals, while still bringing a bit of that Gabriel atmosphere to the proceedings.

The show took an intimate left turn as the man of the hour brought out a Spanish acoustic guitar for a delicate rendition of the Foxtrot instrumental “Horizons” before effortlessly transitioned to “After the Ordeal” from the gold album “Selling England by the Pound”, sporting a remarkable solo courtesy of Roine Stolt which provoked cheering exclamations from the audience. “Cinema Show” came after, a song I don’t think you can hear performed anywhere else. It was simply wonderful to listen to that song again. The audience wasn’t shy about expressing their excitement at each introduction of a cut from “The Lamb Lies Down on Broadway” and this was no less truer when they offered the fan favorite “The Musical Box”, closing the set in a high note. After that song Steve introduced the band and he thanked the crowd for their amazing response, weaving goodbye and vanishing in the dark despite the unanimous request for more coming from every single throat.

Following the explosive chants of the audience, the members of the Steve Hackett solo band returned onstage once again for an encore of “Clocks – The Angel of Mons” – including an outstanding drum solo – and “Firth of Fifth”, the timeless curtain-closing classic that left the audience buzzing, screaming and applauding for another 5 minutes straight of pure ecstasy. This is complex music, but these musicians’ musicians rose to the challenge. And even though he’s one of the architects and authors of the early Genesis sound, Steve’s extended solos (one of them during “Firth of Fifth) were so fluid and beautiful like if he was playing them for the first time in a recording session. His playing hasn’t waned in the slightest with age, he’s approaching his 70’s and he got out there and played his heart out with absolute perfection for almost 3 hours!

In what was an expansive and impactful performance, Steven Hackett remarkably brought back the mystery, wonder, and richness of early Genesis from 1971 to 1976; delivering an outstanding compilation of concentrated nostalgia and authoritative musicianship. Hackett’s talent remains 100% intact and was a delight and honor to witness him on these soul-stirring songs from my youth.

Clocks – The Angel of Mons (with drum solo) / Firth of Fifth