Booking a show on a Monday night is a risky bet, especially during the winter months in Toronto. But at least this last week, when Steel Panther and Stitched Up Heart hit the city, the crowd did not disappoint.

Stitched Up Heart hit the stage at the Rebel at 08pm, and distilled their repertoire of metal for the America’s Got Talent generation in half an hour. The hypnotizing presence of singer Alecia “Mixi” Demner won the crowd, on songs like “Warrior”, “Finally Free” and “Catch Me When I Fall”. Their sound follows an almost bulletproof method of the current metal acts: heavy riffing at the start, with a grandiose chorus that you can sing to. Looking closely, one could see Stix and Satchel from Steel Panther watching their set from the side of the stage. They finished off with the intense number “Monster”, from their first album “Never Alone”.

Between the two shows, the P.A. system played songs from Kiss, Dio, Judas Priest, Motley Crue, Whitesnake and Ozzy. When Van Halen’s “Everybody Wants Some!!” was fading out, a wild roar came, and Steel Panther kicked things off with one of their biggest hits, the high-octane “Eyes of a Panther”. If you enjoy time traveling, this show is right in your wheelhouse. Michael Starr (vocals), Stix Zadinia (drums), Lexxi Foxx (bass) and Satchel (guitar) held the key to Doc Brown’s Delorean, which took the audience straight back to 1985. A time when political correctness didn’t exist, having fun wasn’t prohibited, and metal ruled the airwaves. Watching the crowd was as much fun as seeing the sow, with many fans wearing spandex pants, animal print all over, eyeliner and mullet wigs. “Let Me Cum In” was played next, followed by the first song from their new album “Heavy Metal Rules”, “All I Wanna Do Is Fuck (Myself Tonight)”. As usual in their shows, the girls weren’t shy to show their artillery, with many pair of boobs being flashed early in the game. 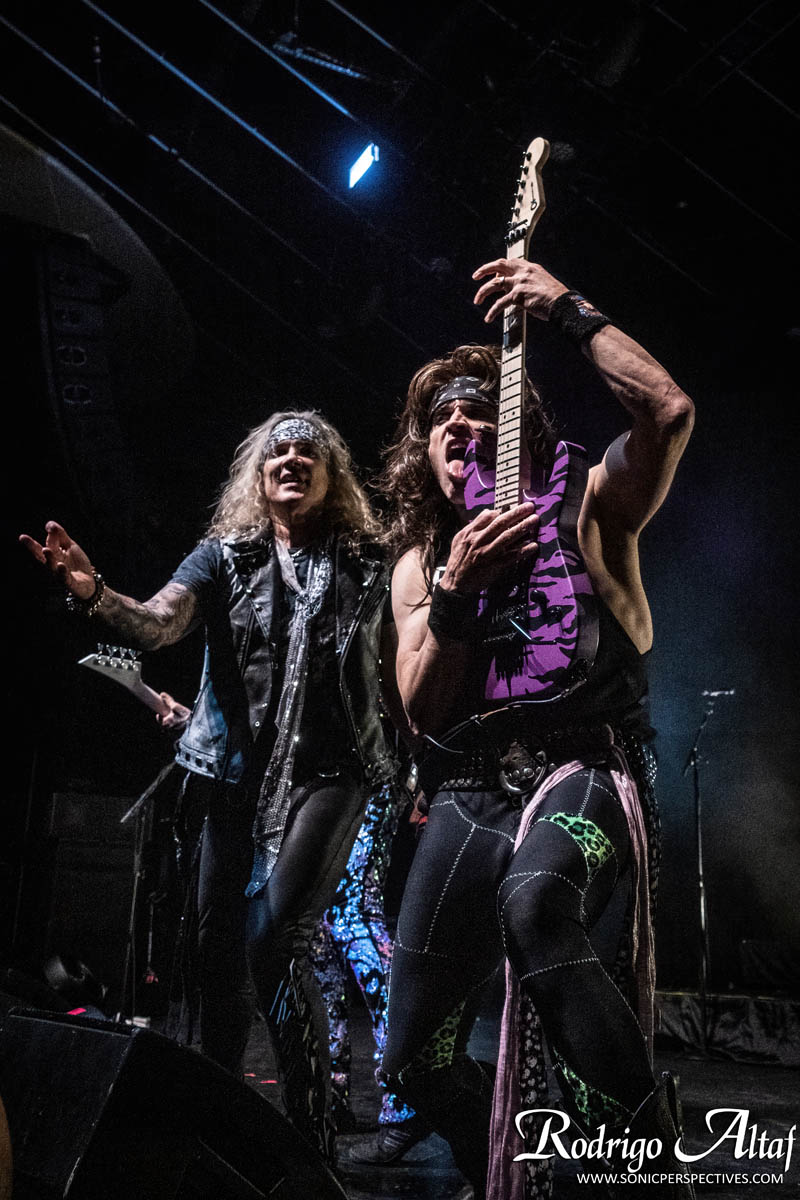 The first girl of many to join the band on stage came on the hugely offensive “Asian Hooker”, one of the highlights of the night. Michael Starr, “one of the four best singers in this band” as per Satchel, was impeccable throughout their set, and he charmed the crowd on “Party Like Tomorrow Is the End of the World” and “Poontang Boomerang”, which is the perfect amalgamation of Poison’s “Unskinny Bop” and Warrant’s “Cherry Pie”.

Two more songs from the new album were played, the “gentle” “Fuck Everybody” and the ballad “I Ain’t Buying What You’re Selling”, where Stix was brought to center stage to play piano. According to Satchel, “believe it or not, he can actually play an instrument with actual notes”. Speaking of Stix, he cracked the audience up with his “impersonation” of Def Leppard’s one-armed drummer Rick Allen.  In the unlikely event that the song titles didn’t give you a hint as this point, here’s a disclaimer: If you’re easily offended and have a low tolerance when your frappuccino is out of stock at Starbucks, stay away from this band. This didn’t seem to be a problem for the ever-so-polite Torontonians tonight, who were in on the band’s joke and embraced their “screw all night, party all day” lifestyle like no other. At one point, a fight broke out in the crowd, to which Satchel and Starr responded with “all this fight over a bag of cocaine? Dudes, forget about it…we’re gonna fuck both your girlfriends after the show anyways, so why bother?”. Classic! 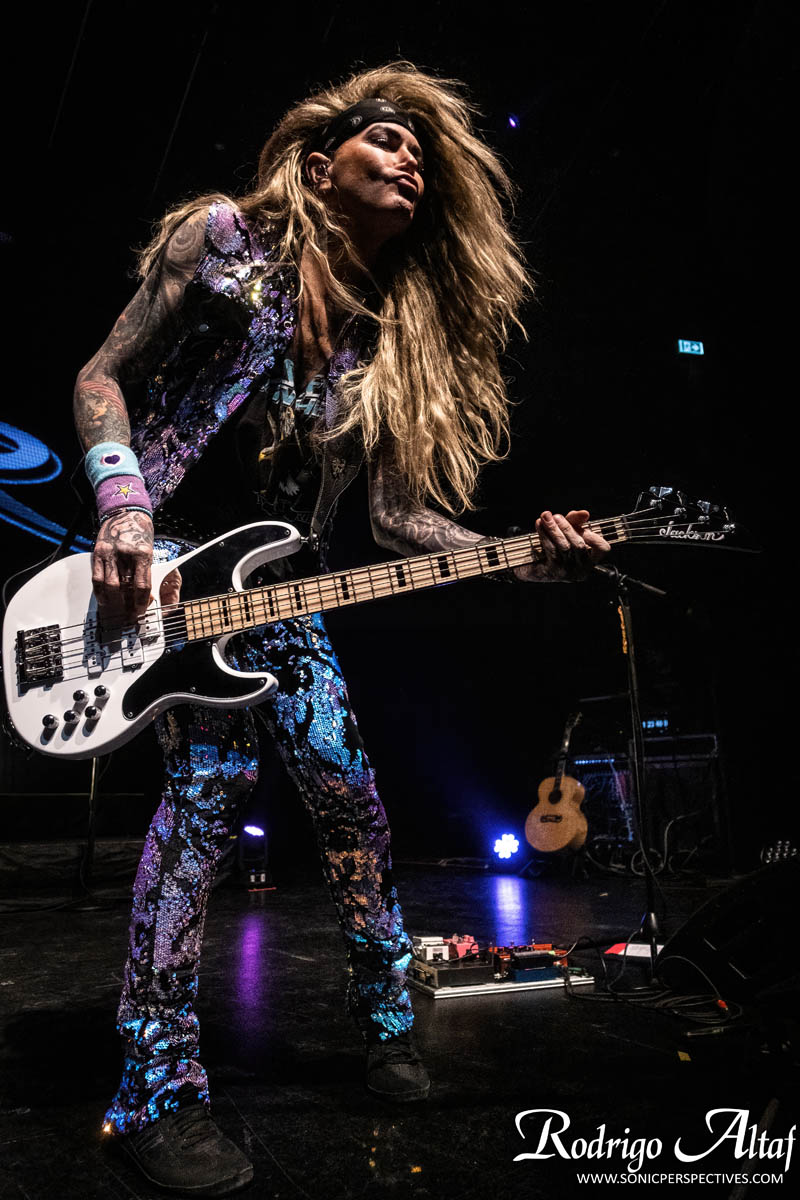 For a band as funny as Steel Panther, the stage banter and their solos are as relevant to their set as the songs. Addressing the fans, known as “fanthers”, Satchel said that Toronto is his absolutely favorite place, only to be corrected by Lexxi “I thought you said it was Chicago the other night?!?!”. Lexxi’s looks were on point, and he did a mean “hair solo”, with the help of leaf blowers. On a more serious note, Satchel served up a blistering guitar solo, combining tricks from Eddie Van Halen, Yngwie Malmsteen and Randy Rhoads. One couldn’t help but wonder what he would sound like on a “serious” band if he ever formed one.

Coming up next were “Weenie Ride” and “Party All Day (Fuck All Night)”, the twin brother of Bon Jovi’s “Livin’ On a Prayer”, where Starr sang the part that was done by Justin Hawkins (of The Darkness fame) in studio. At this point, a horde of ladies was invited to join the bands on stage – “no dicks though, sorry” – to dance and interact with them, which they did up until “Community Property”. The last song of the main set was probably the heaviest of their entire catalogue, “Death to All But Metal”, with many snippets of other songs – “Live Wire” from Motley Crue, “Sweet Child o’ Mine” from Guns N’ Roses, “Seek and Destroy” from Metallica etc. A hard rock archaeologist would actually be required to name all the references that permeate their songs. The triumphant end came on the encore, with “Gloryhole” being screamed in unison by the crowd. I wish they played more songs, especially singles like “Always Gonna Be a Ho”, “Just Like Tiger Woods” or “Fat Girl”, but at that point my eyeliner was starting to run down my face, my inflatable doll was deflating, and my spandex pants were regretting all the booze I had taken earlier in the night. It was time for the walk of shame back home. 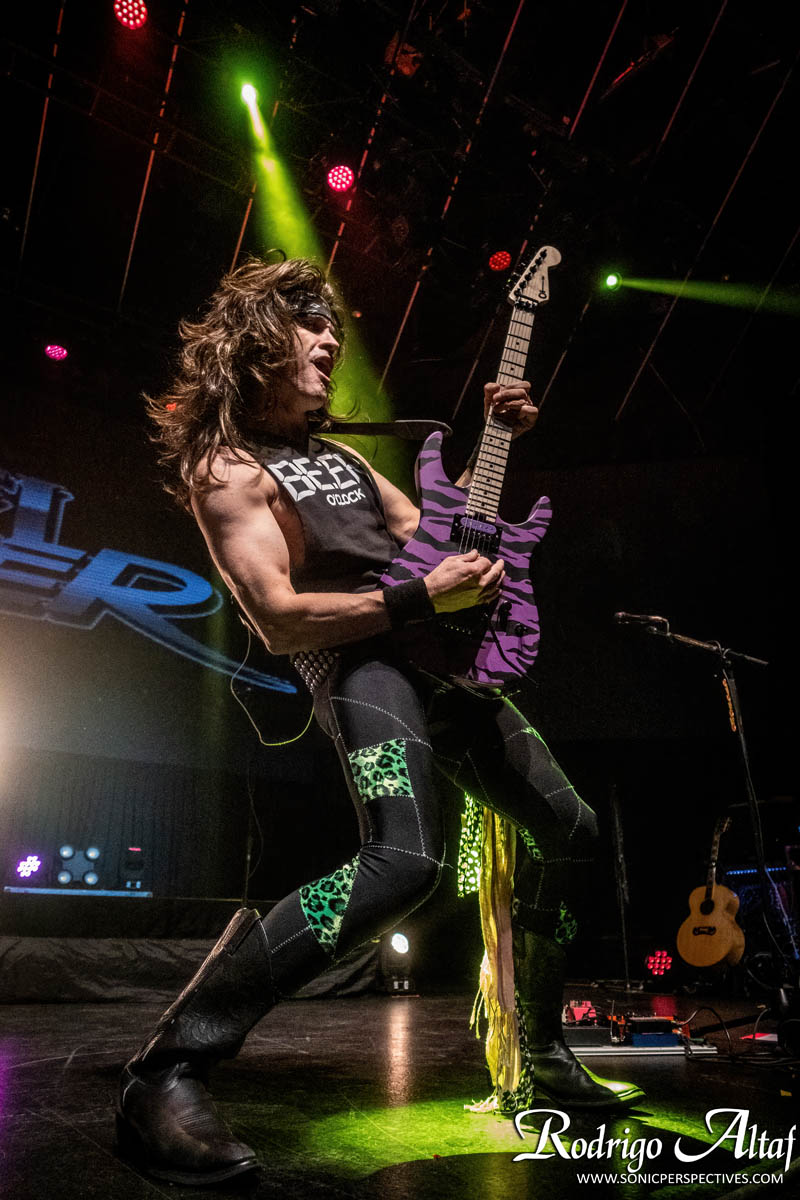 There are still a handful of tour dates for Steel Panther this year, and in early 2020 they hit Europe, continuing their victorious “Heavy Metal Rules” tour. Do yourself a favor and catch them while you can. The Gods of Pussy can’t wait to meet you!