The Sons of Apollo brought their supergroup musical circus to the Mile High city of Denver on Wednesday night and put on a remarkable display of musicianship and showmanship. Sadly, not enough people were there to see it. It wasn’t the weather. It doesn’t help that it was a mid-week show. But most likely, it’s the simple fact that, despite the remarkable pedigrees of all the performers on stage, that Sons of Apollo is a new band, on their first tour, playing some cover songs to supplement their set because they only have one release out as of yet. Like it or not, some dues have to be paid. The mission of the tour is to win over fans with the live show. And with respect to that goal, the Sons of Apollo made a very strong case.

Make no mistake about it, there’s a lot of bombast, swagger and attitude pouring out from the stage. These guys know they’re good and they intend to make sure everyone in the crowd knows it before the night is over. That means spotlight solo moments for everyone and a barrage of sometimes hard to listen to notes that are guilty of being more about “look what I can do” than “look how nice this sounds.”

That is, except for lead singer Jeff Scott Soto, who reigned in glory on the evening. Soto took the opportunity to showcase his power and precision, singing without a microphone in one call and return audience participation segment, and doing a remarkable impersonation of Freddie Mercury in another. Soto was powerful and on target all night, with a competent stage presence and even more confident delivery. His performances of the Dream Theater songs “Just Let Me Breathe” and “Lines in the Sand” were revelatory. This was a sort of homecoming for Jeff, who used to live in Fort Collins and had numerous old friends in the audience who were quick to raise a glass in celebration of his return. He even wandered out into the crowd during the encore of “And the Cradle Will Rock” urging the entire hall to shout about Junior’s grades. Soto has spoken in the past of feeling a little nervous about whether he could hold his own with the players on the stage, but he left no room for disagreement on this night. 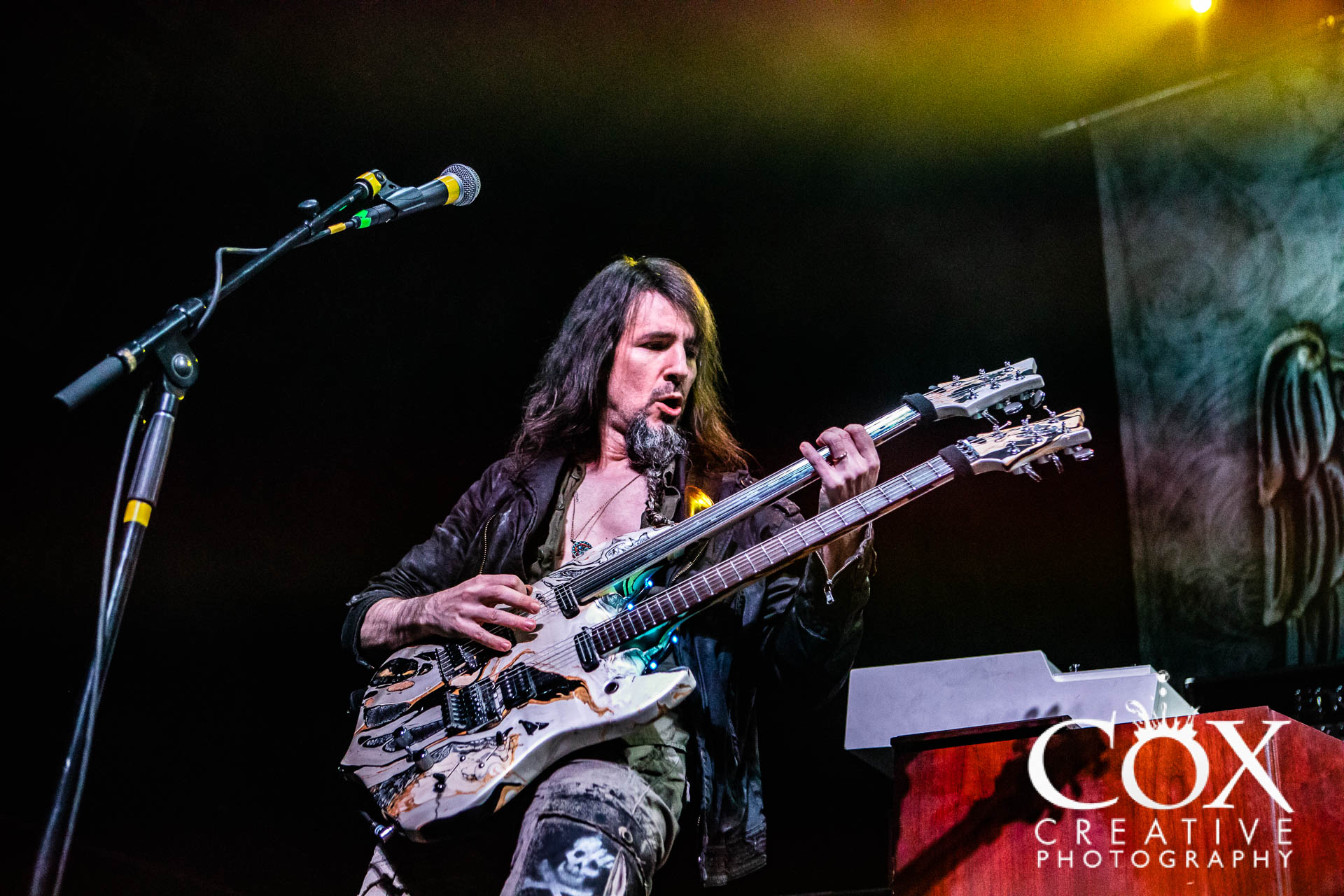 The other performer on the stage who maybe was a little bit of a question mark for some going in was Ron “Bumblefoot” Thal on guitar, but he quickly shredded any doubts while doing the same to his monstrous double neck guitar. Bumblefoot displayed mastery of the fretless fingerboard, delivered a fat but clean tone and donned plenty of rock poses that established his comfort level at being a guitar player’s superhero. His solo in “Alive” was nuanced and his reproduction of John Petrucci’s parts in “Lines in the Sand” were meticulous. Even his background vocals were spot on, and surprisingly high in range at times. Bumblefoot is gaining much needed exposure with this new band, and he well deserves the accolades he’s earning on the strings in this band.

Billy Sheehan was Billy Sheehan. An undeniable force who rumbled a double neck bass all night to counterbalance the massive instrument being wielded by Thal on stage right. Is it excess? Is it a spectacle? Is it over the top? Well of course, but why would anyone expect anything less from the Del Fuvio Brothers ’ new band ? This is their new priority, which appears from Sherinian’s media interactions to welcome comparisons with their former band, Dream Theater. There’s no question they have something to prove and the plethora of individual performances, including Derek’s lengthy solo, were staged to do just that. Sherinian had to improvise when the organ he was pounding suddenly lost audio, but he quickly recovered and assaulted his Nord keyboard instead, which spews tones more like a lead guitar than a key based instrument. Nobody brings the strut and pomp of Sherinian, and that applies to what he plays, as well as the way he carries himself with a “Notice me, Dammit!” vibe. Can he be a bit much? Yes, but that’s obviously by design and with tongue planted firmly in cheek.

While usually one to grab attention, Mike Portnoy was either more subdued or simply upstaged by the energetic performances of everyone else playing. As is usually the case, his drums sat very loud in the mix, and as usual, he played with a legendary sense of confidence, spraying tasty fills and rolls throughout the hammered beat. He also did a lot of background vocals. Did I mention the Sons of Apollo are full of excess and bombast? It should come as no surprise then, that Portnoy’s huge pounding arsenal of Tamas and Sabians included a massive gong which may have only been smacked once in the night. Portnoy appeared to be having a good time, and claimed that Denver was offering up a level of energy that they hadn’t felt since playing in South America.

While Billy’s solo section was lengthy and looked very difficult to play, it wasn’t necessarily the most melodic thing to listen to. And that, in fact, may be representative of the biggest challenge this band faces (aside from getting more people familiar with them). There’s no question what each of the Sons of Apollo can do on their instruments. The question is, can they write songs as good as their ability to play them? One could argue they have not definitively answered that yet with their debut release, but it certainly leaves listeners anxiously eager to hear what is still yet to come.

If you’re a fan of live hard rock, and are sitting on the fence on whether to see this show…get off the fence and into the concert hall. You’re guaranteed to see a bunch of great players having a great time. Here’s to hoping the songs will be every bit as great in the near future, as well.