In an effort to catch up with all our pending articles – while wading thru the ludicrous quantity of pictures and videos taken during the amazing Cruise to the Edge celebration (you can read our own review of the event in this location) – the time has come to write a review for the SONS OF APOLLO show held at the pre-cruise party for the Monster Of Rock Cruise, the one which sets sail less than a week after Cruise to the Edge is over. I witnessed the first two ever performances by the collective comprising Mike Portnoy on drums (DREAM THEATER, AVENGED SEVENFOLD, ADRENALINE MOB, STONE SOUR, THE WINERY DOGS, TWISTED SISTER, AND METAL ALLEGIANCE, among others), Billy Sheehan on bass (STEVE VAI, DAVID LEE ROTH, MR. BIG, as well as THE WINERY DOGS), Ron ‘Bumblefoot’ Thal on guitars (GUNS N’ ROSES, ART OF ANARCHY, and LITA FORD), Derek Sherinian on keys (DREAM THEATER, ALICE COOPER, KISS, BILLY IDOL, and BLACK COUNTRY COMMUNION to name a few), and Jeff Scott Soto (YNGWIE MALMSTEEN, JOURNEY, SOUL SIRKUS, SOTO and TRANS-SIBERIAN ORCHESTRA) as the front-man. If you have been living under a rock for the last 30+ years and you are completely unfamiliar with the aforementioned, at least after reading the extensive list of bands they have been involved with, you can’t help but sensing there should be enough pedigree, chops, experience and likely decades of touring at play here to make this band an unrelenting live force. And your assumption could not be more precise.

Let’s set the record straight: while I overall liked their debut album “Psychotic Symphony”, it did not impress me like an ultra-essential album. The music was intricate, profound and elaborated, revolving around Sherinian‘s emblematic heavy keyboard sound modulation and Portnoy‘s outwardly poly-rhythmic drum-strokes. There was a respectable dose of groove and classic rock a la Van Halen, Deep Purple and Led Zeppelin appropriately mixed in, effortlessly complemented by Jeff Scott Soto timeless melodic metal voice giving the songs a great layer of muscle. Moreover, the strings department was second to none, with the blistering, beefy, and sometimes impossible guitars licks commanded by Ron ‘Bumblefoot’ Thal and mind-bending bass lines courtesy of Mr. Sheehan. What was not to like? I’m not sure, perhaps drowning under too many albums to review at the time, I didn’t give it the proper listen. Nevertheless, after seeing this band on stage three times in less than a week, I’m ready to revisit that record with new eyes (and ears) and I can easily save you the trouble of reading the rest of this review: just effing go and catch them when they play near you. Just do it and you can buy me a coffee later. 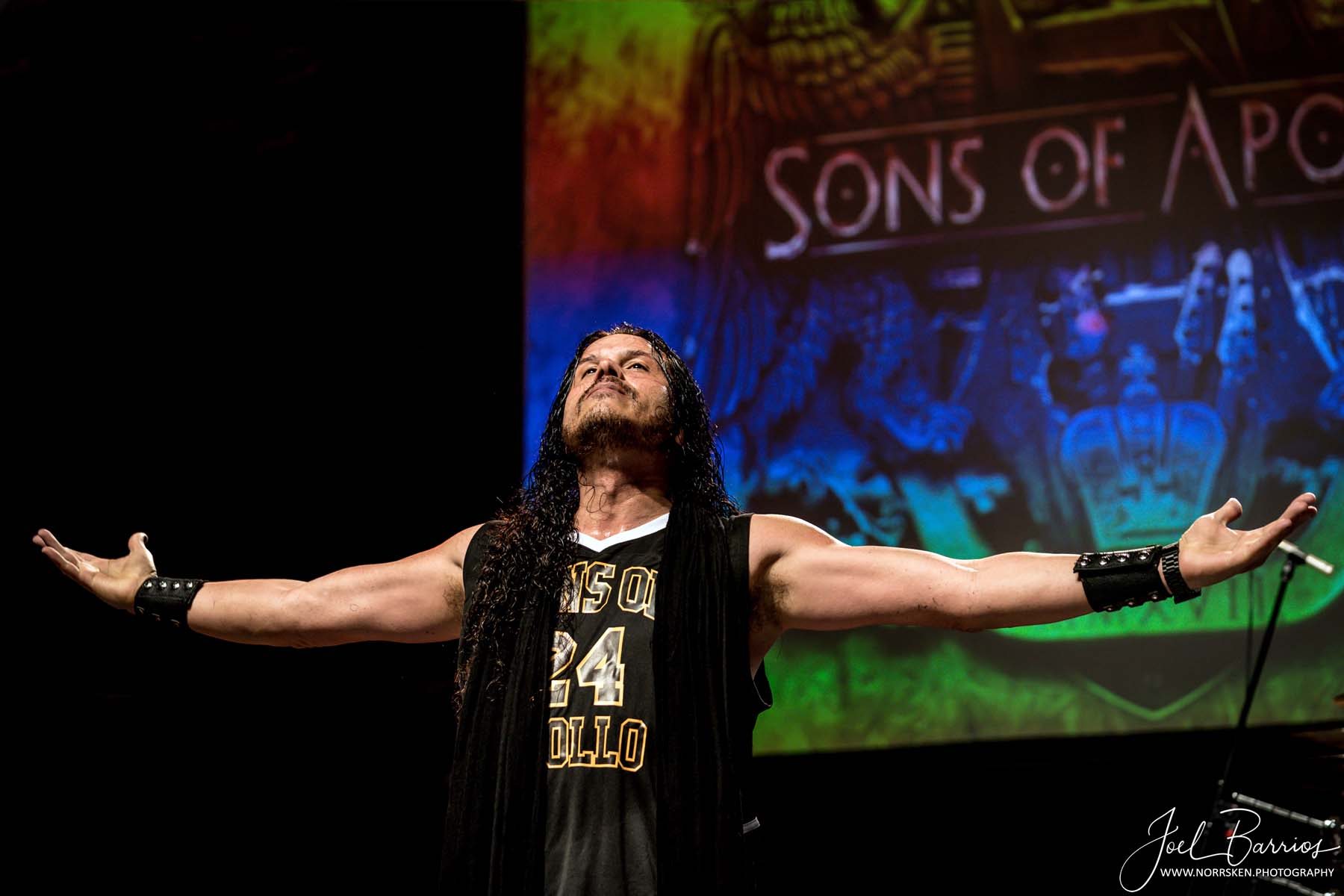 Music reviewers like me, love to throw the words “legendary” and “epic” around, just to remark brilliant performances in a very flamboyant way. Nonetheless, there are cases when words like these feel justified, or they impress you like the initial words you would think of using. In the case of a SONS OF APOLLO show, and despite this band still greasing up their musical clockwork, you are bound to enjoy something akin to a religious experience. They hit the stage like a freight train, sharing sheer enjoyment while performing together, a synergy than is certainly meant to penetrate more deeply as their mission to conquer the world stages continues to expand. Their live craft is colossal, bludgeoning at times, and expansive at others, full of authority and passion. Portnoy‘s stage presence is as visual and imposing as ever: he bashes his drums to the accompaniment of the guitar tones, stands up and interacts with his band-mates signaling the next solo, slaps the side of his head while navigating through complex rhythms, and throws/catches his sticks in the air, whipping the audience into action with every gesture. Sheehan and Sherinian were involved previously with Portnoy in PSMS (Portnoy, Sheehan, McAlpine, Sherinian) and they don’t really need much introduction: simply high energy, superior musicianship that blows your hair back, with Billy abusing his signature double neck Yamaha bass and Derek blazing his way across the keyboards. 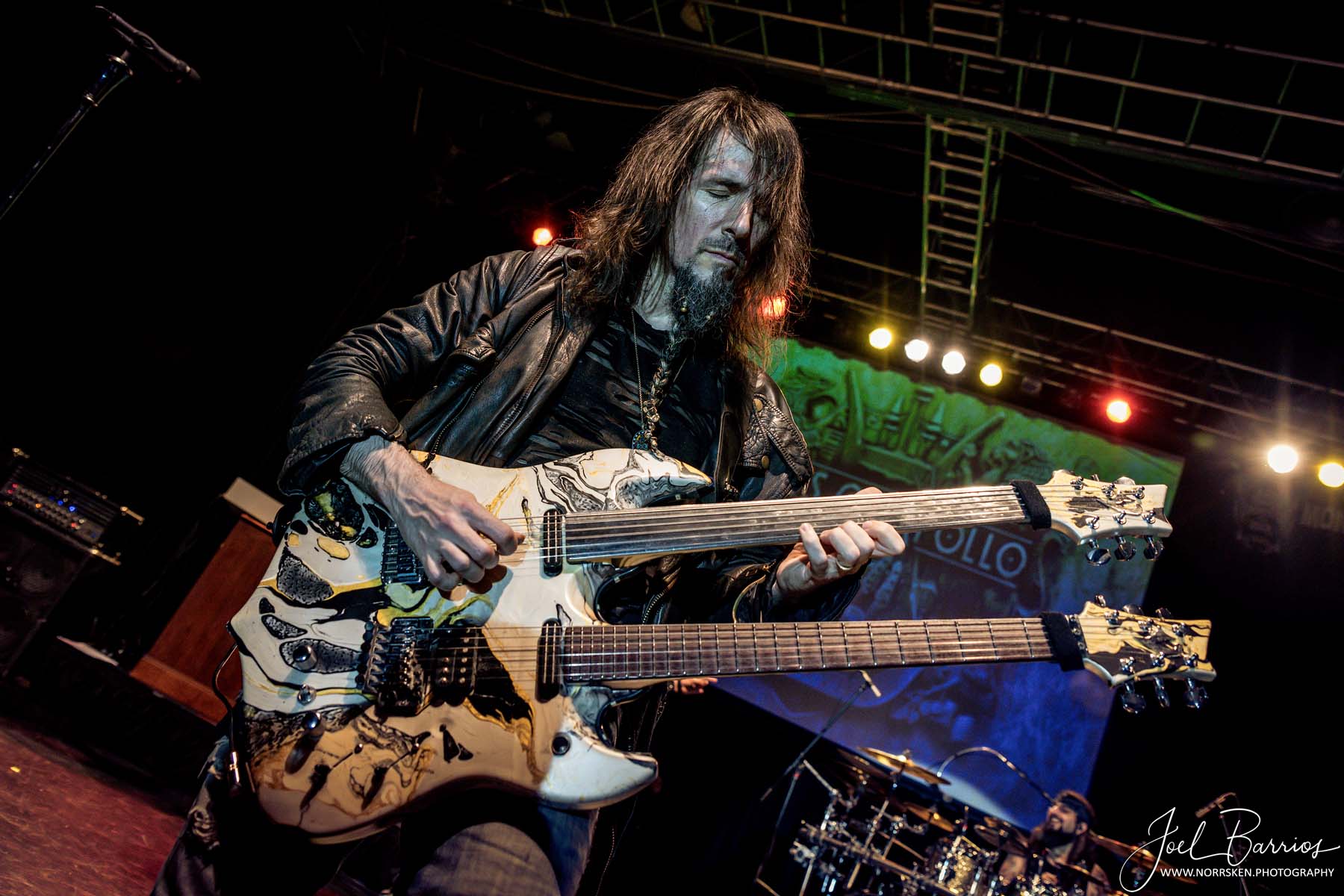 Holding the first line of defense, we have Soto and Bumblefoot, the only two here not previously involved with Mike. Well, they were chosen for a reason – and they do their best to steal the show. Ron plays his double-neck guitar – with fretless top fretboard – like a possessed, head-banding, backing Jeff’s vocals effortlessly (you would be surprised to find what a fine voice he possess) and navigating his guitars parts without stepping for a second into an abyss of self-aggrandizing musical wankery. Melodic and technical at the same time, his playing is truthfully a remarkable sight. In addition, the restless Jeff Scott Soto couldn’t sound better at his 52. He is a performer that has built a lasting career on releasing and singing top-notch music, with chameleon-like abilities to adapt to whatever project he has worked on, and the unique timbre and feel of his voice gives the songs a deeper and more sprawling breadth. Simply put, the picture-perfect man to lead this band.

I was expecting a great show, yet I walked away after enjoying a fairly unexpected display of ass-kicking, cohesive and crushing “psychotic symphonies”, which certainly lived up to their hyped thoroughbred and made a permanent impression in every soul in attendance. Are you craving some insane time signatures, unsullied performance, soaring solos and would enjoy impeccable DREAM THEATER, QUEEN and VAN HALEN renditions? Look no further; SONS OF APOLLO is just what the Dr. ordered!

Enjoy  the picture gallery below and make sure to check out their recently announced additional tour dates here.