In a time when a few artists are booking shows for the second half of 2021, while others are simply scrapping next year altogether and postponing dates to 2022, one can’t help but being confused with the state of the music business today. This was of course the first industry to shut down because of COVID-19, and most likely will be the last one to come back once things are a little bit more under control, so it’s understandable that a huge question mark is above everyone’s head at this point – fans and artists alike.

Luckily, there are still a few alternatives at hand. While far from replacing the full experience of seeing a band live face to face, live streams are a way to keep in touch with the fan base, and to generate even a small revenue to keep the crew under a salary. Artists as diverse in sound and size as Armored Saint, Baroness, Pearl Jam, Sting and Obituary have all engaged in this type of media recently.

Releasing their 13th album, “Blood & Stone”, Sevendust took the virtual stage last Friday, October 23rd, to showcase a few new tunes and some old-time favorites. At 9 PM sharp, the show kicked off with an intro theme, while the screen showed all the album covers and a message from singer Lajon Witherspoon. The new single “Dying to Live” kicked off the proceedings, and it quickly passed the test as being a great show opener. This will be the band’s only live performance this year, and they wasted no time, following up with the almost rap-like “Denial”, from their sophomore album “Home”.

Sevendust have been called everything: post grunge, nu-metal, progressive, alternative rock, pop metal…and the variety in the band’s catalog seems to warrant such a wide array of descriptions. Tonight’s set-list presented plenty of evidence of that, with songs as different from each other as the pure metal assault of “Splinter,” the nu-metal tinged “Pieces” (which had pyrotechnics added on stage) or the moody “Angel’s Son”. Throughout the fifteen tracks played on the show, they managed to showcase all sides of the band’s sound, and covered almost their entire discography.

Much has been said about Lajon’s versatility as a singer, but this ability cannot be overstated. The man really can sing anything, and his magnetic stage persona is inimitable. Also worth mentioning is how tight the two guitar players were throughout their set: John Connolly and Clint Lowery played as locked in as can be, with the highlights of their performance being the riffage on “Thank You” and “Bitch”.

The tight rhythm session deserves its own paragraph. Vince Hornsby’s four-string thumping ensured the bottom end was covered, and were a perfect companion for Morgan Rose’s manic drum parts. Morgan also contributed with some wacky vocals throughout the night, most noticeably on “Till Death”. The many tempo and mood changes in the band’s myriad of styles are challenging to replicate properly live, and Vince and Morgan play a key role in creating the proper atmosphere, above which the six strings and the singer shine.

Other highlights of the set include the aforementioned grungy “Bitch”, the heavy and dark “Blood from a Stone”, which was inspired by the hardships faced by the band and whose theme is perfect for today’s time, and a heartfelt cover of Soundgarden’s “The Day I Tried to Live”

While the pandemic is far from over, one can only hope that bands create new ways to entertain and engage their fan base. Sevendust’s live stream for example, included T-shirt bundles, which fans will hold on to for years to come, perhaps as a bittersweet memory – a time of struggles, but with a fair share of silver linings, like tonight’s set. “Blood & Stone” is now available on the usual platforms, and one can only hope that the band is able to come back to the stage with an actual audience in the not too distant future. 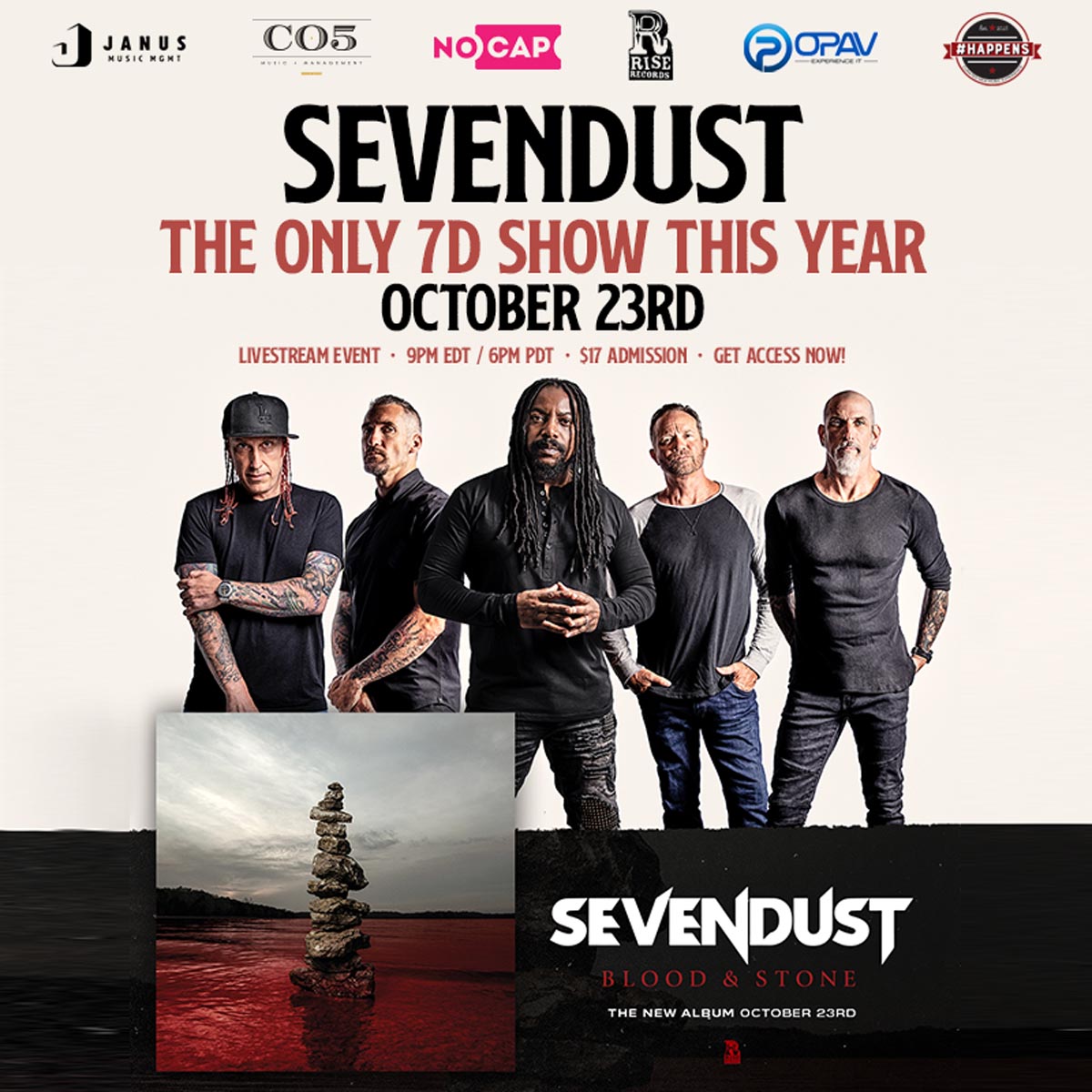