I vividly remember when Scorpions announced the “Get Your Sting and Blackout World Tour”, following the release of their studio album Sting in the Tail. Shortly before the tour began in March of 2010, the band declared that it would be their last ever tour before retirement. For long-time Scorpions followers like me, the news were disheartening, and when the band included the at-that-time called Bayfront Park Amphitheater – located in the heart of Miami downtown – as one of the venues for their East coast appearances, it was a no-brainer for me to attend. Judging by singer’s Klaus Meine’s own words, the members of the band fully intended to retire from the road. “We were tired of touring and playing 100 shows a year in 30 countries”.

Fortunately, – for the delight of millions of their fans worldwide –, the band reconsidered that decision and retracted from it, and they have continue touring. “We thought, rationally, it might be a good idea to say ‘bye bye’ while we were still in the best shape, leave the scene with the best impression and be remembered as a band that runs around like crazy. But seven years later, that still goes as well” recently said guitarist Matthias Jabs “We realized there’s still more gas in the tank. At this point, it doesn’t make sense to say goodbye to all this, which is, after all, our lives.” The band has been honoring the previously cancelled North American tour dates due to the laryngitis, which affected Meine last October of 2017; and they recently made an appearance at the Hard Rock Event Center. The 3,600-seat venue located in the northwest corner of Seminole Hard Rock Hotel & Casino in Hollywood – which soon will be razed and replaced with a state-of-the-art 6,500-plus-seat venue in a theater-style configuration – is an iconic entertainment destination, located minutes from Fort Lauderdale’s world-famous beach, and has hosted some of the hottest musical acts such as John Legend, Bruce Springsteen, Eric Clapton, Billy Joel and more.

As they have done during the last tours, Scorpions brought Queensrÿche again as their opening act. Despite the surprising short nine songs set-list, and the somewhat shocking absence of long-time guitarist Parker Lundgren, – sitting out this run of dates and momentarily replaced by Mike Stone, who joined Queensrÿche for the 2003 album Tribe and stayed with the band for six years – the Seattle rockers were as good as you can possibly remember them. Todd LaTorre might still be considered “the new singer” for those who don’t follow the band’s endeavors, but for my ears he’s been the second best decision this band could ever go for (kicking out former singer Geoff Tate being the best one). His voice is fierce, powerful, urgent, and big. He hits the high-pitched notes of songs like “Queen of the Reich” showing absolute control of his vocal delivery, without attempting to mimic his predecessor, but putting his own twist on the Queensrÿche classics. He is also a flashy front-man who definitely knows how to engage and rock a crowd. His bandmates don’t need much introduction, they are seasoned professionals with decades and thousands of live shows on their backs:  founder members and bassist Eddie Jackson, and guitarist Michael “Whip” Wilton, plus ex-Kamelot drummer Casey Grillo – who has been sitting in the drum-kit for quite some time now replacing the other original band-member Scott Rockenfield – plus the aforementioned axeman Mike Stone, delivered a high-caliber, inspired and surgically precise performance, one I personally wished had been longer than it was. The band closed with “Screaming in Digital” and the classic “Eyes of a Stranger” leaving an inspired audience very thrilled. 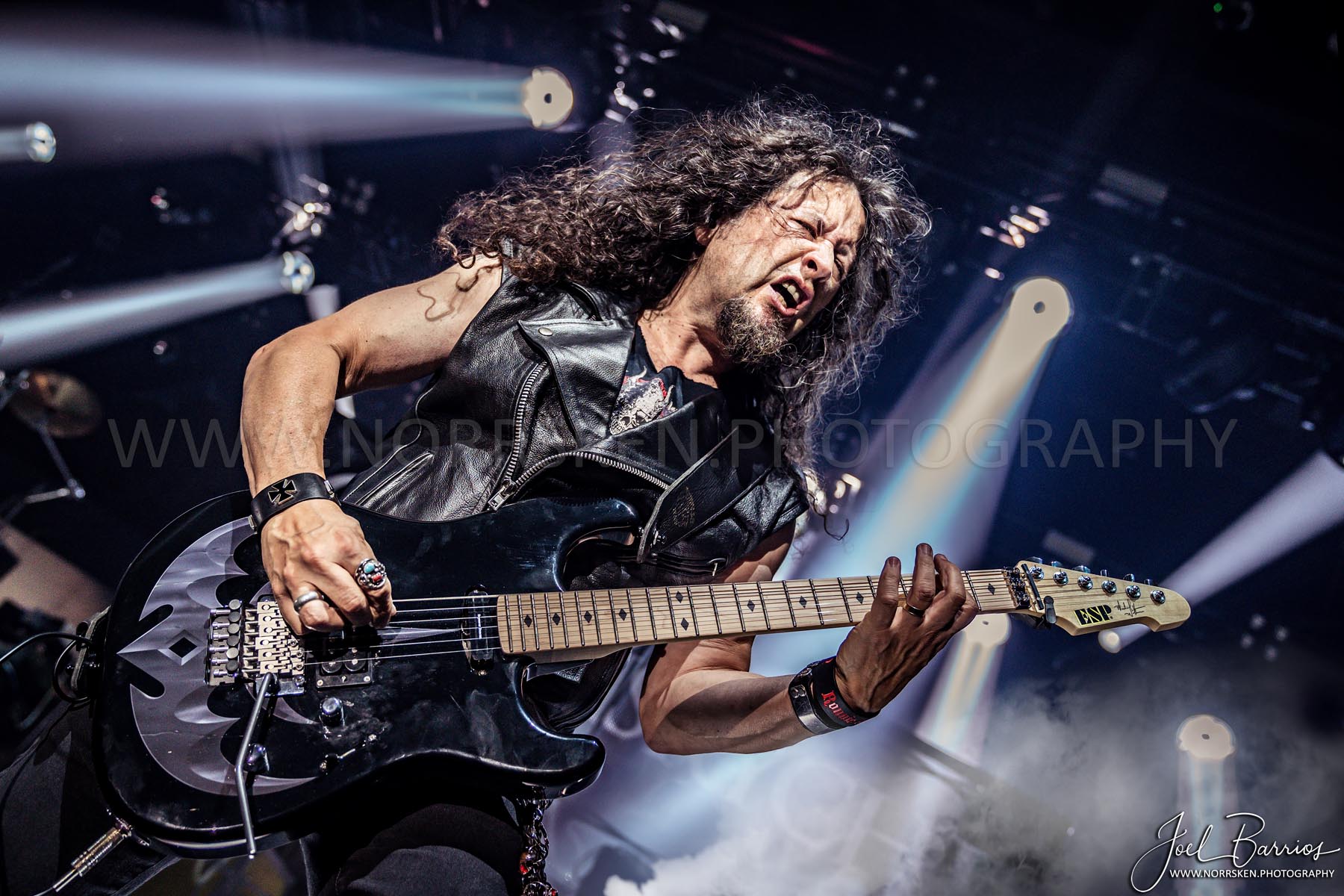 After a 15 minutes intermission the notes of “Crazy World” started to sound over the PA, the gigantic backdrop covering the front of the stage fell down, and the German rock institution took the stage at the rhythm of “Going out with a Bang”. Now before going any further, let’s stop for a moment and think of a significant detail: how many music acts you can think of that are still active and celebrating their 50th year anniversary? Moreover, out of those (Yes and The Rolling Stones initially come to mind) how many you would say – without the shadow of a doubt – that are still performing at the top of their game? I know … the already short list is now even shorter. Well, make no mistake, as timeless as Scorpions’s music is (and always will be), the band still delivers an energy and fun packed show, one that pairs power with melodic sensibilities and makes 37- years’ old tunes sound as rocking and smoking as they did during the World Wide Live Tour. Klaus Meine undeniably discovered the magic formula very few others vocalist have found (Glenn Hughes is a good example) in order to keep his voice sounding almost as good as in the early 80s. Incendiary and ever-animated guitarist Rudolf Schenker and his smiling six-string partner Matthias Jabs, plus capable bassist Paweł Mąciwoda and powerhouse drummer Mikkey Dee hit the stage with an avalanche of oomph and non-stop rocking attitude which delighted the overexcited and screaming multitude.

A generous 17 songs long setlist allowed the band to stretch out over several albums, with staples like “The Zoo”, “Send Me an Angel”, “Blackout” and “Wind of Change” – in an audience-aided version with every single throat in attendance singing along – spread throughout. Newer tracks like “We Built This House” and “Delicate Dance” alternated with a 70’s medley including a personal favorite “Steamrock Fever” – a true delightful moment for older fans. A few tunes later a touchy tribute to Lemmy Kilmister made presence, with the band playing an unrestrained cover version of Motörhead’s hit “Overkill”, followed by a potent drum-solo courtesy of ex-Motörhead’s drummer Mikkey Dee, situated in his drum platform raising approximately 20 feet above the stage. “Big City Nights” marked the most impressive moment of the night thus far, with the venue wall’s trembling over the unparalleled excitement of the audience. Coming back after a short break, the band re-appeared for the encores of “No One Like You” and closed with an extended version of “Rock You Like a Hurricane”, one that sounded as ageless and wonderful as any Scorpions fan could ever hope for. 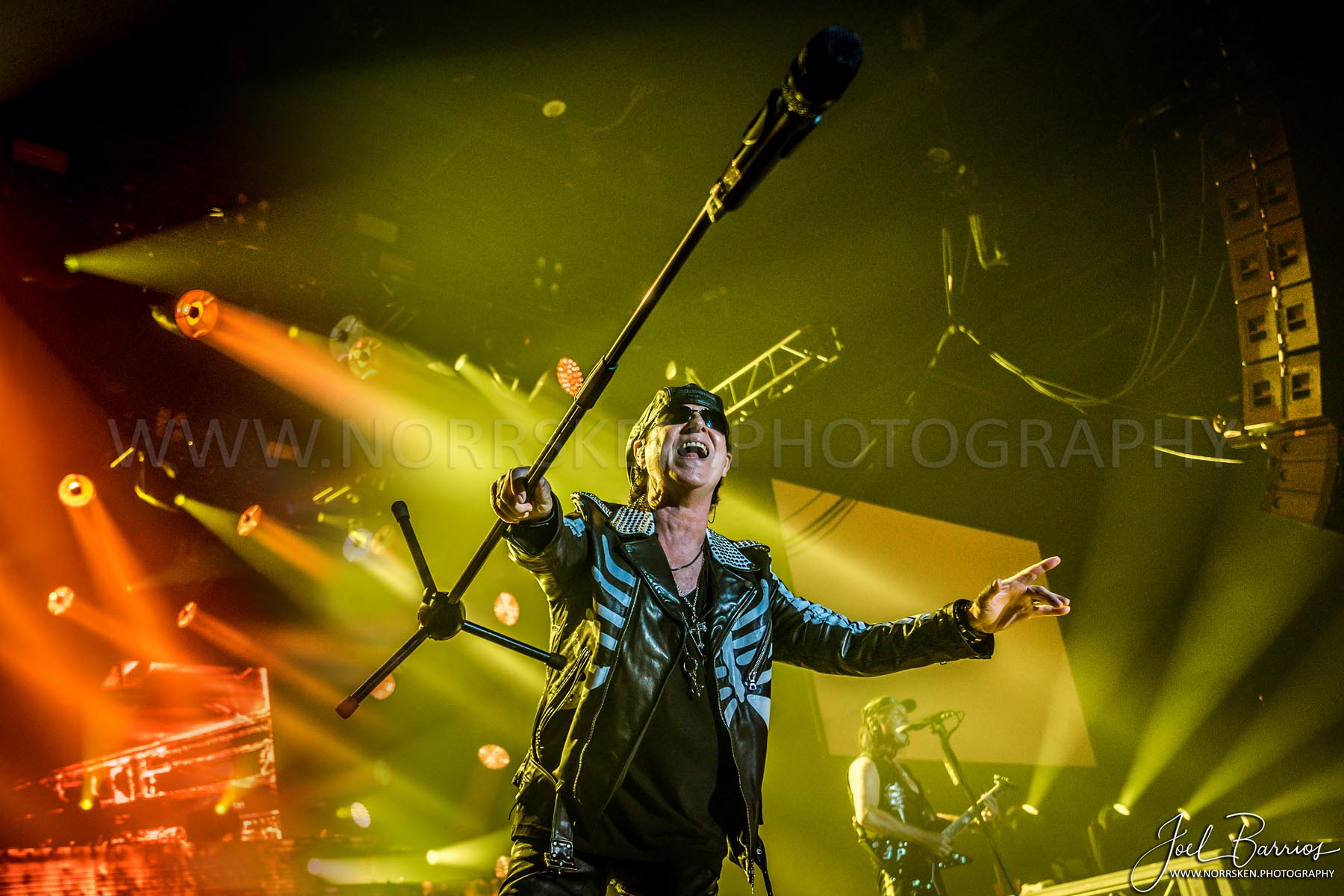 Though these guys have aged as all of us have, they did not miss a beat and still have a whole lotta’ life to give despite the grey hair. They continue to perform like a true rock and roll band that delivers high energy and fun-filled show, they keep sounding like in their heyday, they keep sounding like Scorpions. If they come near you in a future tour, and you are up for a fabulous and amusing evening, get yourself a ticket, you certainly won’t regret it.

Crazy World (Played over PA) / Going Out With a Bang / Make It Real / Is There Anybody There? / The Zoo / Coast to Coast / 70’s Medley: (Top of the Bill / Steamrock Fever / Speedy’s Coming / Catch Your Train) / We Built This House / Delicate Dance / Send Me an Angel / Wind of Change / Tease Me Please Me / Overkill (Motörhead cover) / Drum Solo / Blackout / Big City Nights