This is the chronicle of the second day of an event, the review of the first day can be found at this location.

The second day of RockFest 80’s started with Kickin Valentina, hailing from Atlanta, Georgia. After a minor sound issue, they started the set full of their self-described as loud and unapologetic rock and roll sound, which in my opinion has clear influences from classic 80s bands like Guns and Roses. The set was a short but effective mix of their two albums Super Atomic and Imaginary Creatures, a great way to welcome their new singer Brian Bezotte. This being Brian second performance with the band I believe he did an excellent job. 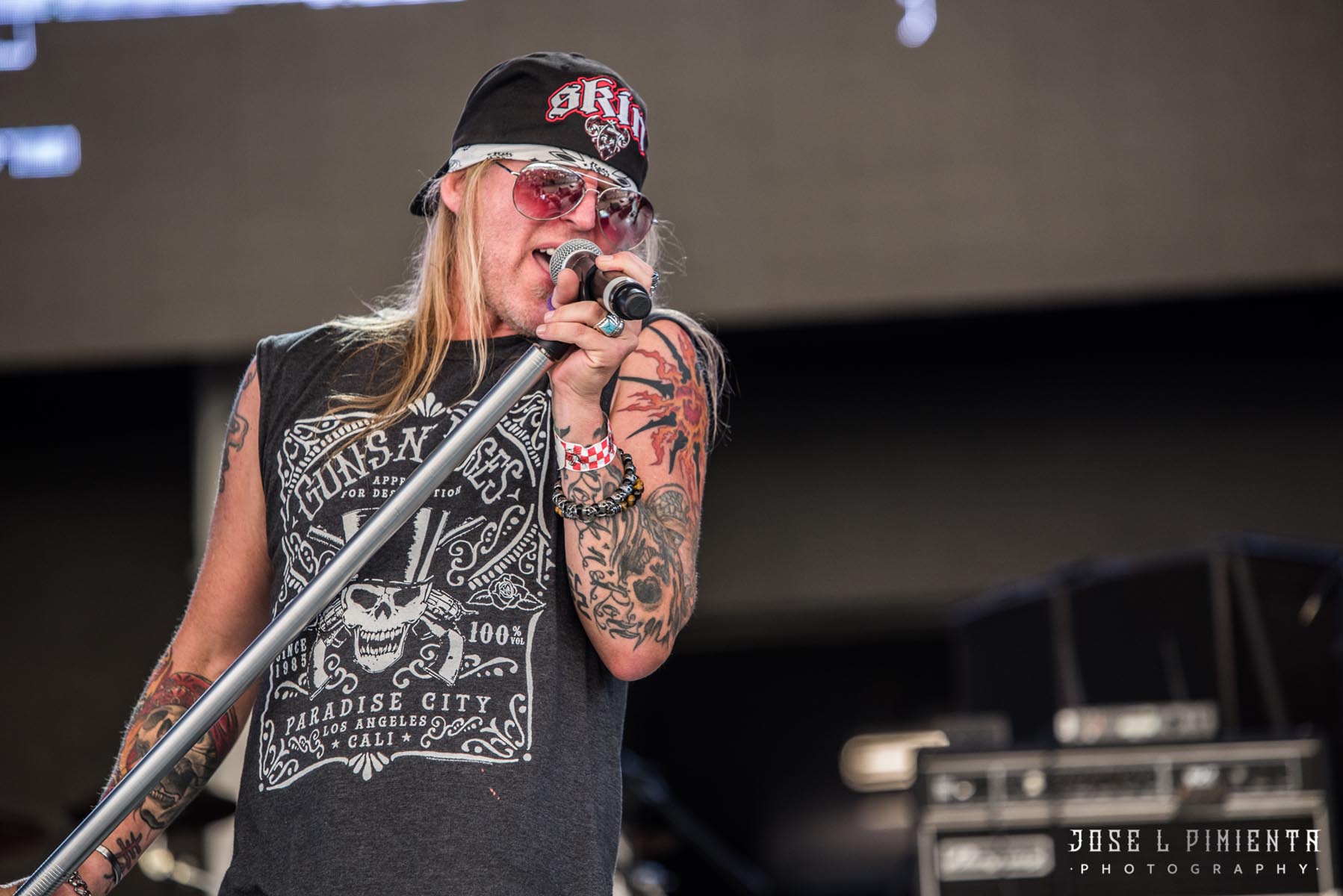 Up next came a wonderful treat for me, Steelheart from Connecticut. I have been listening to their music for years but I had never seen them play live. Their performance started with “Blood Pollution”, a well-known song  from Steel Dragon, the fictional heavy metal band created for the 2001 movie, Rock Star. Instantly the crowd was lit up with smiles and excitement. They followed with some of their heavy hitters from their 1990 self-titled album like “Like Never Before”, “Gimme Gimme” and a crowd pleaser, “I’ll Never Let You Go”. For their last song – another one from the Rock Star movie “We All Die Young” – singer Miljenko Matijevic jumped into the main floor, shook hands, and engaged with the fans while singing. This Florida afternoon got warmer than usual during their performance and they truly set the bar high for the rest of the acts to follow. 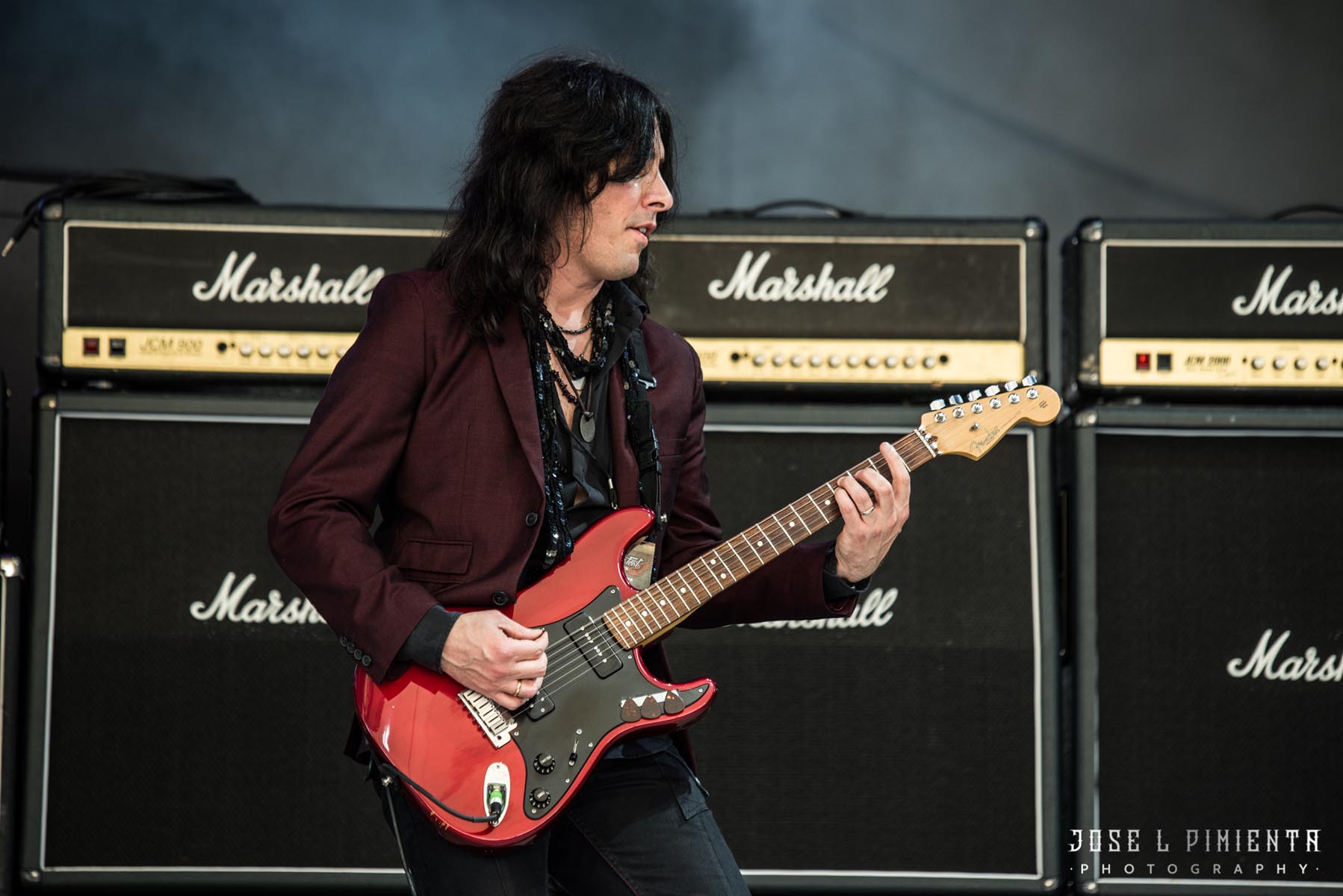 After Steelheart set the stage on fire with their show it made sense to get the guys from Firehouse next. They started 10 minutes ahead of schedule, which meant they were able to play a couple of extra songs, which definitely delighted the fans. Their set came filled with all the 90s hits they are known for like “All She Wrote”, “When I Look Into Your Eyes”, “Love of a Lifetime” and my favorite song of theirs “Reach for the Sky”. I have to say what impressed me the most of their performance was how well kept and powerful C. J. Snare’s voice was. I look forward to seeing them again around South Florida in the future. Around 4:40 PM it was time to grab some lunch, therefore we walked to the vendors area where there were a lot of nice options for food and drinks. What could possibly be better than having lunch meanwhile watching the Alice Cooper tribute band, Lipstick Killers playing all our favorite songs from “The Godfather of Shock Rock”? 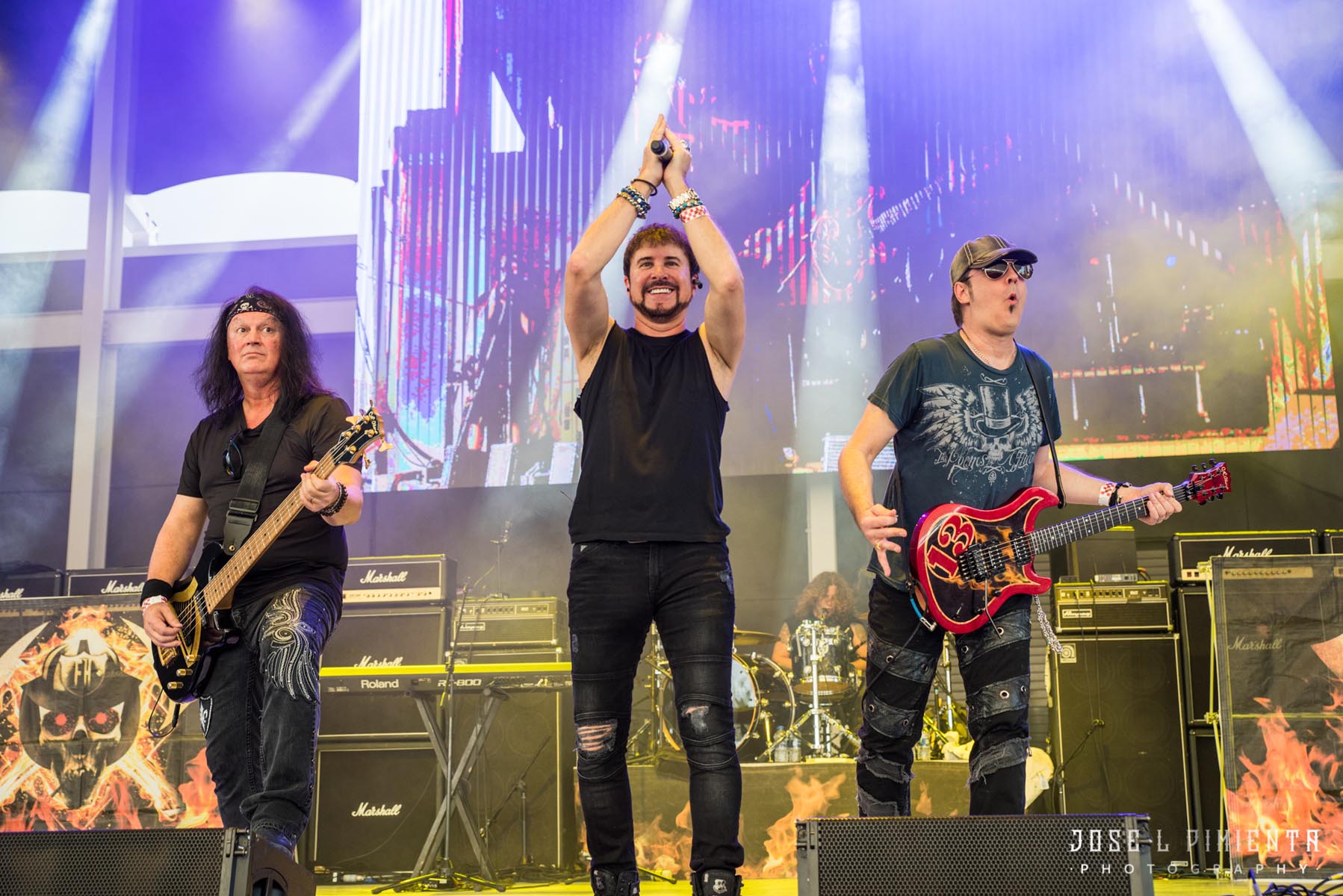 After lunch, we got to see Winger as the sunset started. This was another pleasant surprise for me since I have always enjoyed their music and the graphic nature of their album covers, specially their self-titled and debut album from 1988. Great ballads and masterful guitar playing by Reb Beach made their performance truly engaging. Fans of all ages danced and sang along to tunes like “Miles Away”, “Headed for a Heartbreak”, “Madalaine” and their most famous hit by far “Seventeen” which they modified the lyrics to match this year to say “She is only 48”.

Ace Frehley, the Spaceman himself took the stage around 6:55 PM. A long awaited performance for this festival, which did not disappoint at all. Ace opened strong with “Rip It Out” from his first solo album and followed with several smashing hits from the KISS catalogue, including “Love Gun”, “Parasite” and “Detroit Rock City”. His playing was outstanding and he paired with his iconic guitars with lights and smoke, what a show! 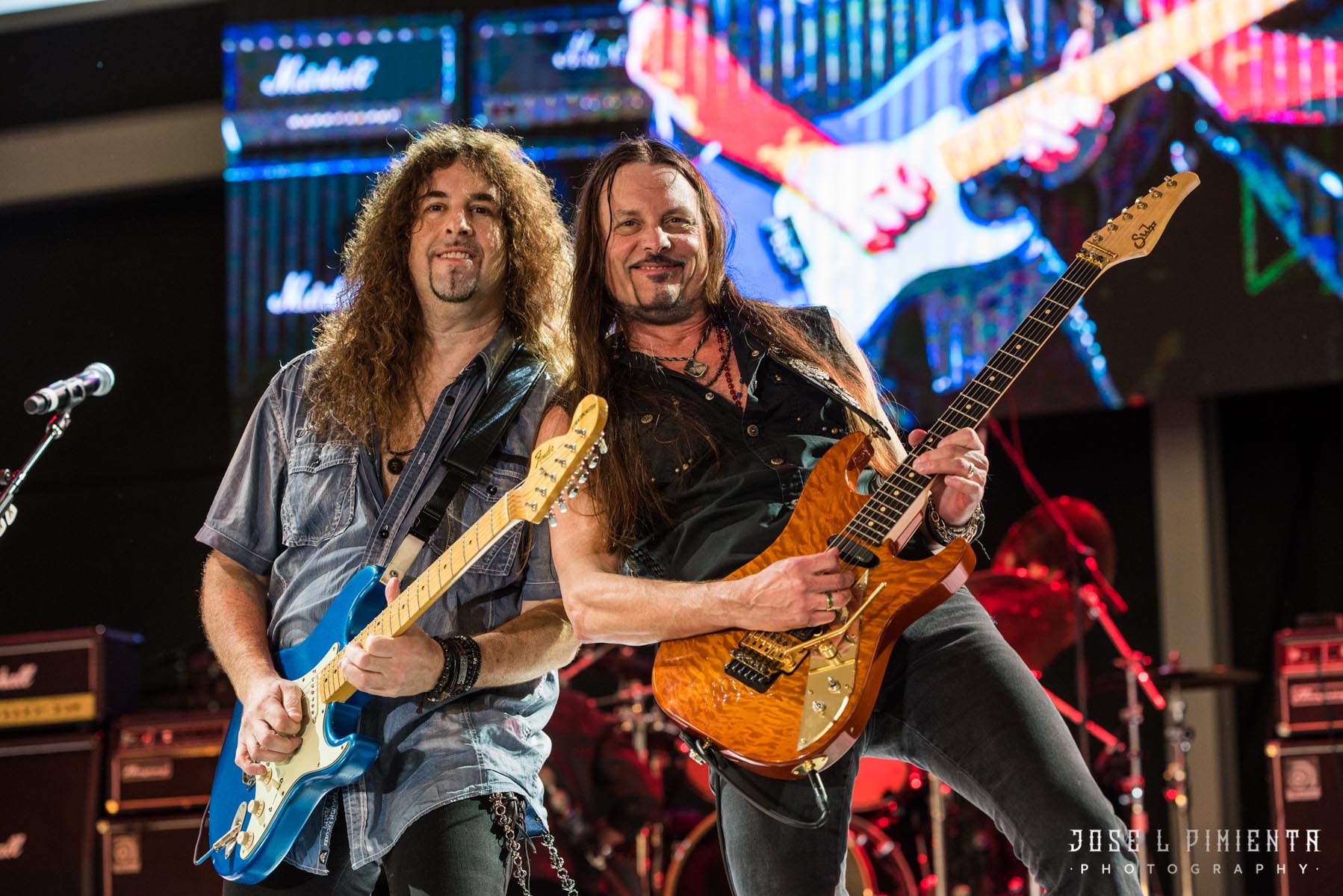 Sebastian Bach, the original voice of my favorite 80s era band, Skid Row arrived on the RockFest 80’s stage for the third year in a row, ready to deliver another of his acclaimed shows. Kicking it off with “Slave to the Grind” and followed by everything from heavy tunes like “Big Guns” and “Monkey Business” to heartfelt ballads in the vein of “I Remember You” – which he dedicated to all the great musicians we have lost over the past few years.  His closing anthem was “Youth Gone Wild” caused a true revolution in the front rows, with the fans jumping, banging their heads and screaming like maniacs, definitely remembering their younger years. 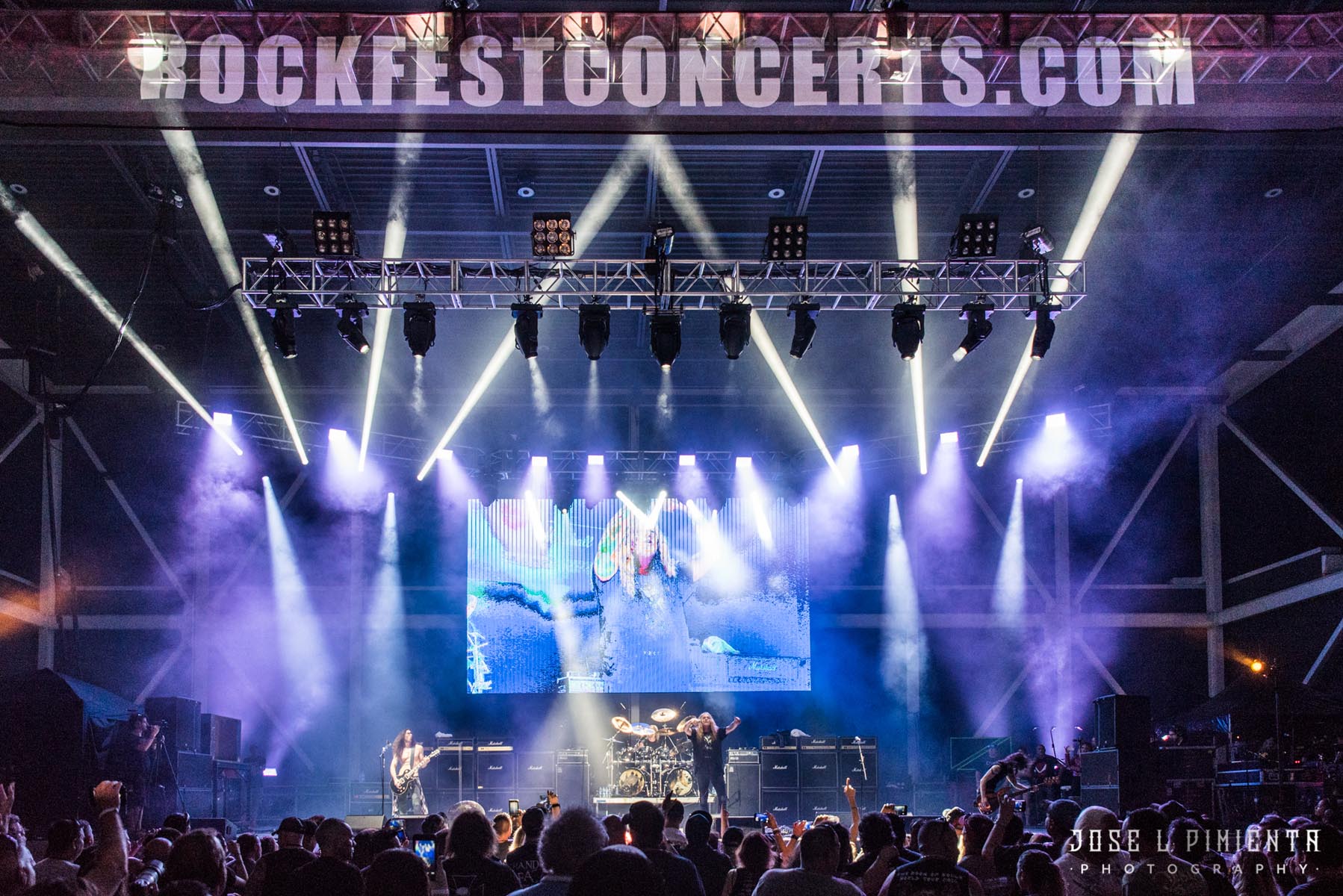 After a hard-to-top performance by Bach, the night headliner Night Ranger came on-stage, ready to deliver a set full of their sing-along anthems and guitar-heavy, yet melodic, hard rock attitude, capturing the signature sound fans have loved for decades.  The band fired on all cylinders, captivating the RockFest 80s audience with a set-list spanning their entire career. The vitality and oomph of a band giving away every ounce of their energy while at the same time celebrating their 35th anniversary was palpable. A true show of past-meets-present perfection and outstanding musicianship to close the magnificent festival on a very high note.