Last weekend South Floridians witnessed – for the third year in a row – the ultimate celebration of the 80’s rock and roll scene, through the Rockfest 80’s festival event. This year the two days event took place at the Miramar Amphitheater, a fairly-new venue inaugurated in the spring of 2017, sporting a canopy covering its 3,000 luxury seats, flanked by a general admission lawn that holds an additional 2,000 people.

The opening day festivities were set in motion by Stellar Revival, a local band that recently opened for Bon Jovi in Los Angeles at the premier LA Arena: The Forum. Despite the crowd was still in warming up, and many attendees were yet to make their way through security, the quintet came on stage ready to make an impression, and boy, did they. Singer Rino Cerbone and guitarist Brian Spears led a very energetic and dynamic performance, which certainly set the proper tone for the rest of the day, with the whole band sounding on-point and relishing themselves, oozing the level of enthusiasm and engagement that you can expect from seasoned pros. 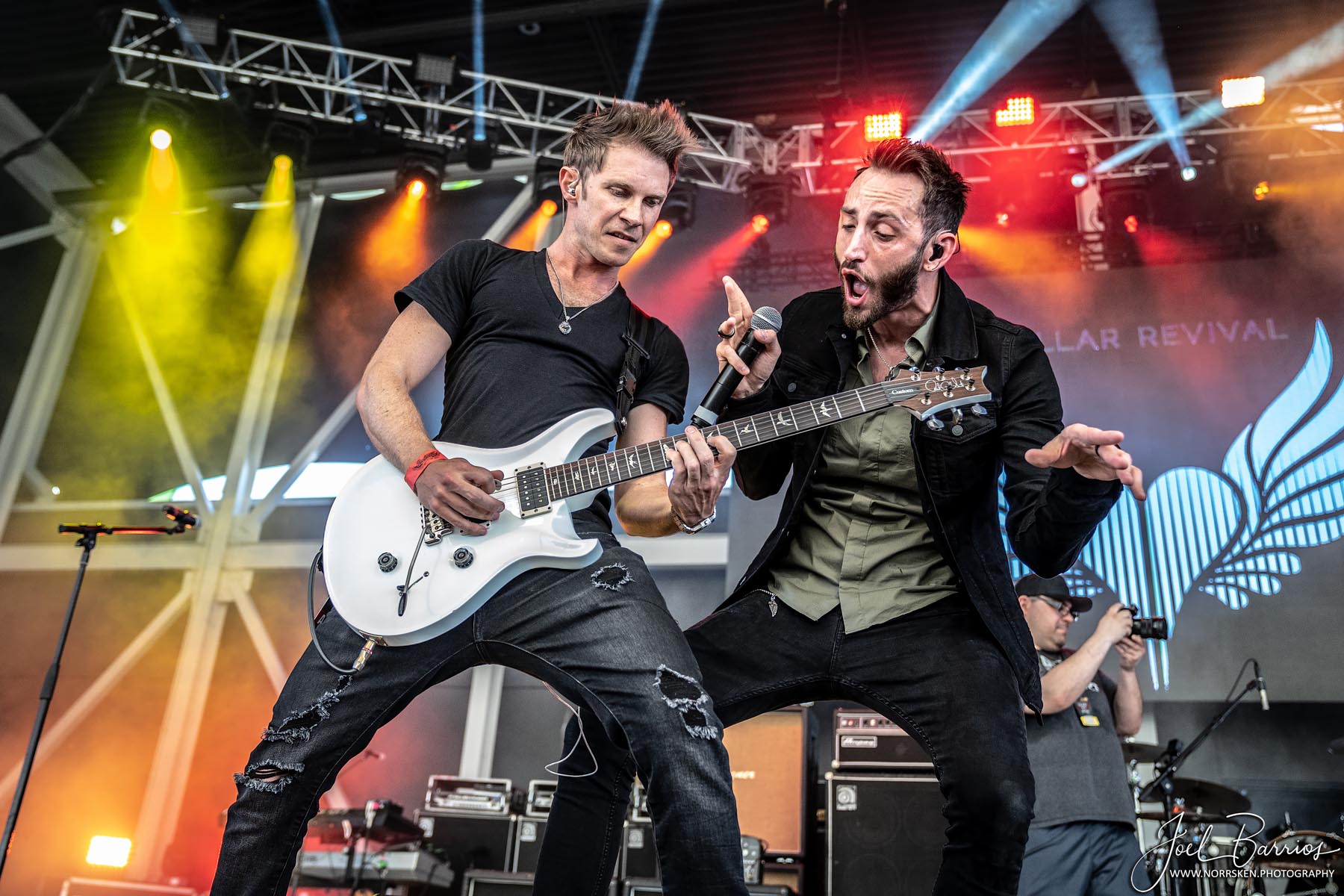 Mathew and Gunner Nelson (collectively known as Nelson) had the second spot for the day, and they presented a lovely duet-only show that obviously included some hits from their double platinum 1990s album “After the Rain”. Maybe bringing them as the second band was not the best decision schedule-wise, as there’s only so much you can contribute to ignite the rock n’ roll vibe of the audience by strumming your acoustic guitars, however we unquestionably enjoyed singing along “Only Time Will Tell” and the closing staple “(Can’t Live Without Your) Love and Affection.”

George Lynch’s band aptly named Lynch Mob stormed the stage after Nelson, and the first surprise was to see Last in Line’s front-man Andrew Freeman back at the mic duties. As soon as Lynch walked up on stage, the crowd started to scream. The band went right into “She’s Evil But She’s Mine,” with Freeman delivering a fantastic vocal performance and commanding the crowd, moving around incessantly and sometimes running across the stage. Bass duties were carried out by Sean McNabb – who has been with many artists, including Dokken himself – while Lynch abused his guitars dropping one sick solo after another, delighting the front rows that by that time had become crowded with clusters of onlookers continuously arriving. A couple of Dokken’s classics in the form of “When Heaven Comes Down” and “It’s Not Love” were unanimous cheered, just before they engaged in an extended instrumental jam as part of the closing song “Wicked Sensation” which was the picture-perfect ending for a truly explosive show that if any felt too short. 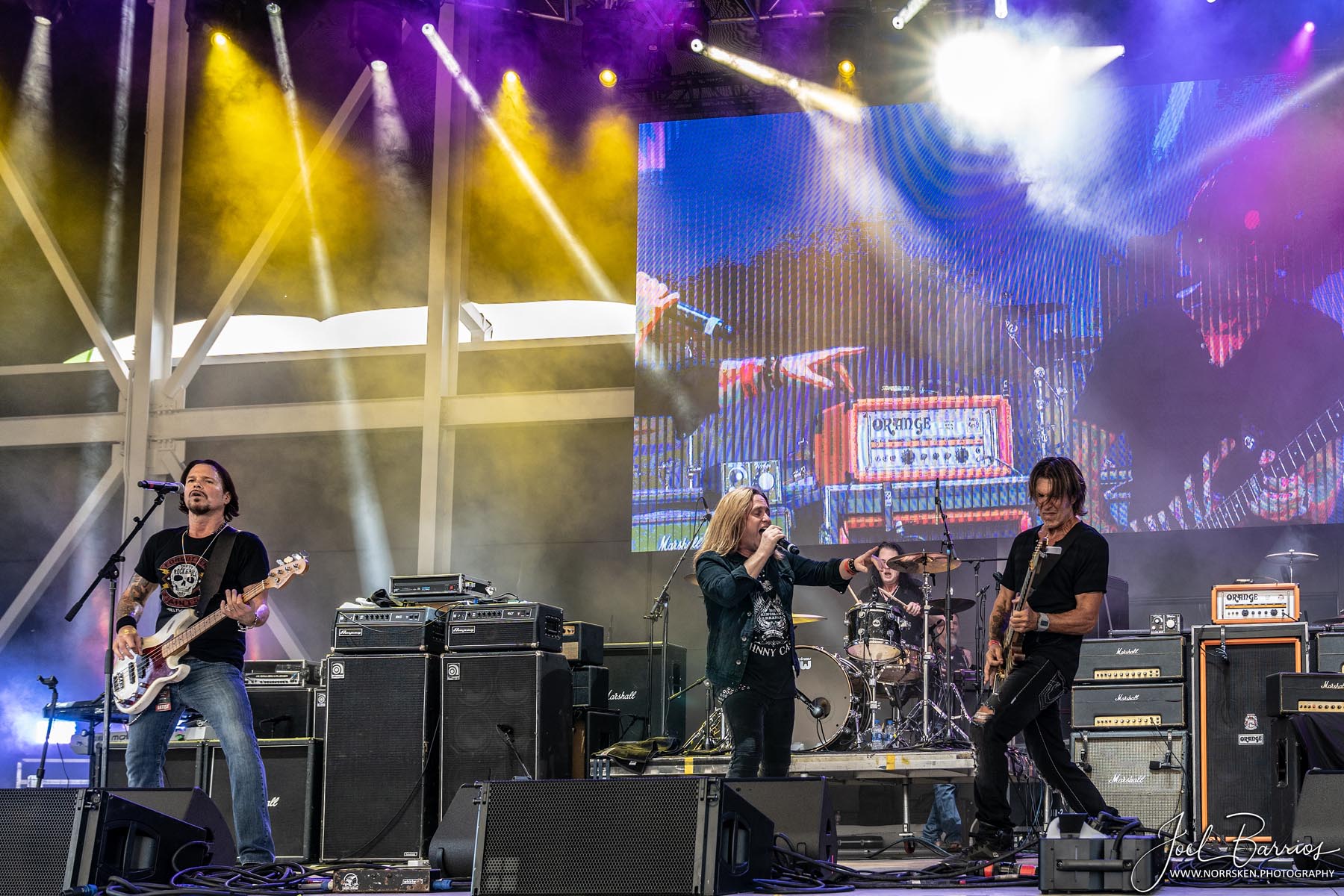 Hard rock trio Zebra had a tough act to follow after Lynch Mob left everyone wanting for more, yet they rose to the occasion and delivered the goods. Opening with their smashing hit “Who’s Behind the Door” the trio easily kept the joyful atmosphere, with front-man Randy Jackson laying down his painstaking, intricate solos with elegant precision  and proving his voice is still quite strong with that falsetto. Powerhouse drummer Guy Gelson kept the beat and pounded the skins with an energy unmatched by musicians half his age, and had his extra spot to shine through a maniacal drum solo during “The La La Song” – which also included an extended ending. Bassist/vocalist Felix Hanemann was constantly smiling while switching from the grooving four strings to the keys, all the while demonstrating that Randy not the only one in the group that can sing. They chose “Tell Me What You Want” as the final hurrah, and you could see the grinning faces of the crowd everywhere after the last noted dropped. 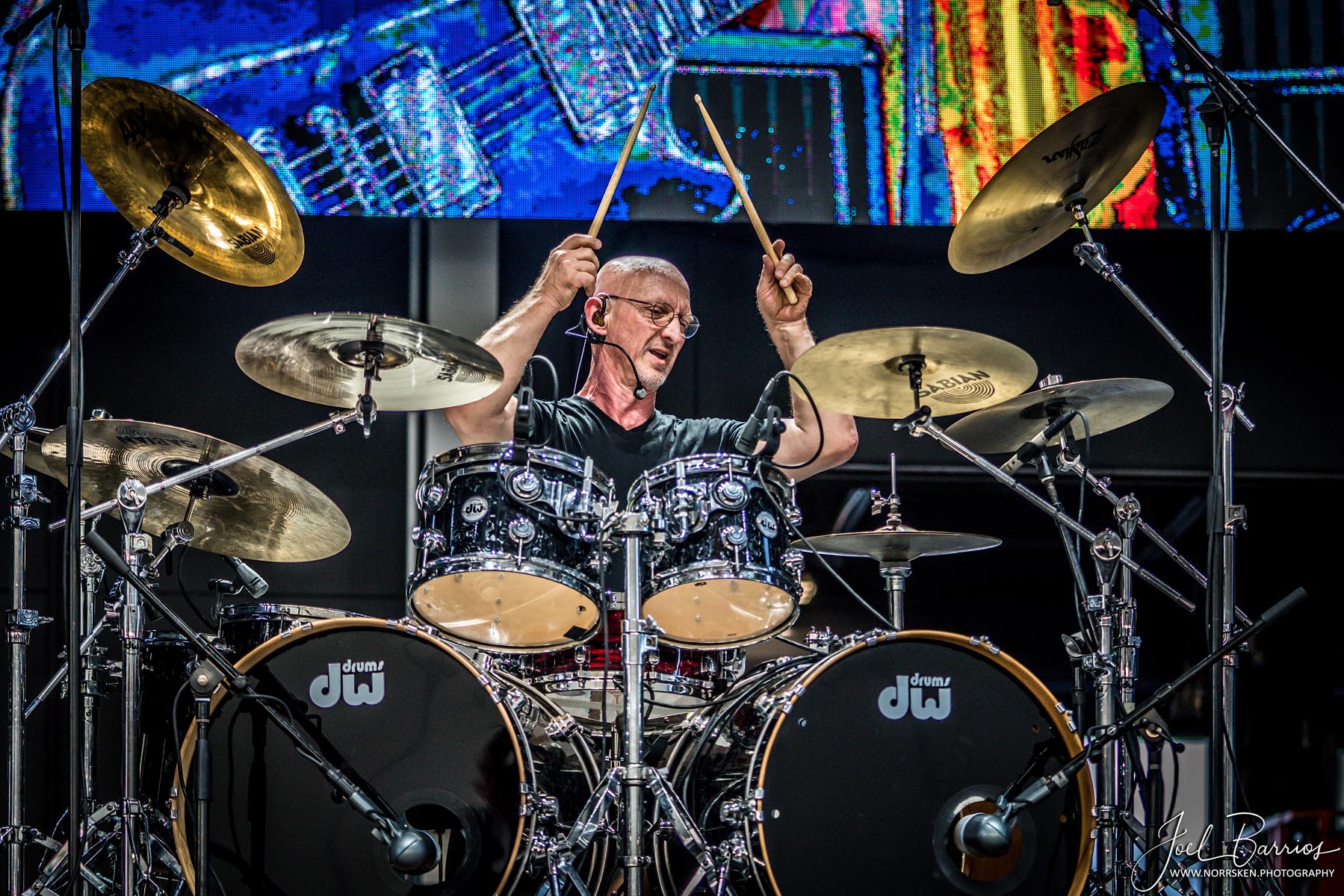 Eric Martin’s from Mr. Big fame appeared on stage next and he brought Trixter’s Steve Brown and PJ Farley as members of his backing band. Intertwining a 10 songs long set-list comprising Mr. Big’s classics like “Everybody Needs a Little Trouble” and “Alive and Kickin’” with Trixter’s anthems like “Tattoos and Misery” and “One in a Million” their set was electrifying and genuinely remarkable. The inimitable voice of Eric Martin sounded unchanged, and his bandmates offered a true musical fest, packed with punchy guitar solos, rolling bass lines and solid drumming, while beaming from ear to ear the entire show. As you can expect the now gigantic crowd sang every word of “To Be with You” in unison with Martin, turning the moment into goosebumps material of the highest order. 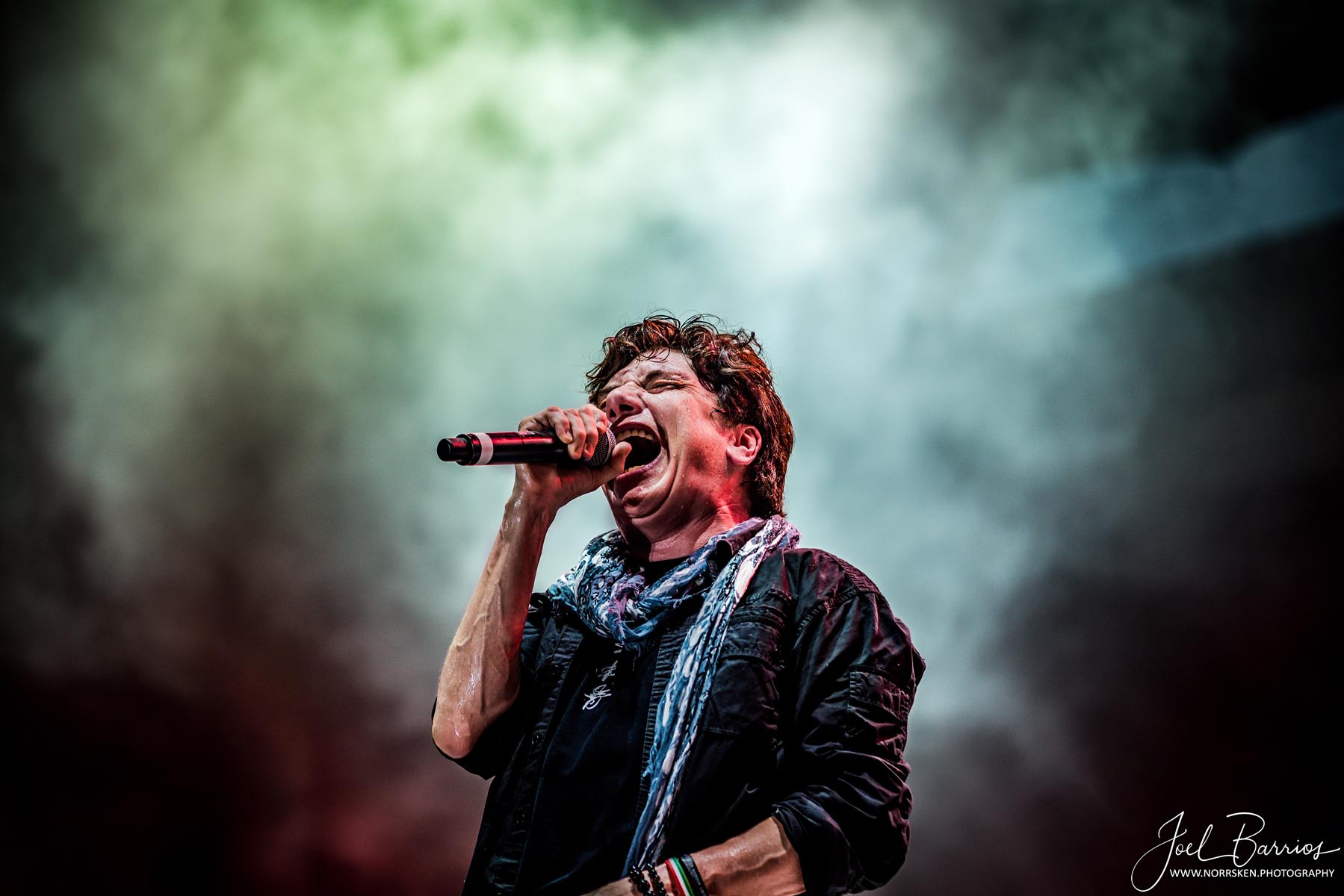 A band I’ve loved literally all my life and had never seen playing live before came next: KIX. Singer Steve Whiteman and the boys hit the platform like a tornado, making me wonder what they could possibly eat or drink before hitting the stage, because whatever it is, I want some. Describing Steve’s stage presence would be specially challenging:  the amount of infectious liveliness that radiated from himself – and from the whole band to be honest – was flabbergasting.  I can’t describe how impactful their vigor is, and how amusing Steve was, whipping the crowd with his humor and excitement while cracking jokes and telling stories about the inception and the tour years for the Blow My Fuse album, which coincidentally turns 30 in 2018 and which they played from head to toe. The band was downright tight and Steve’s voice was as good as in the old times, further expanding the already contagious atmosphere. I truly felt like it was the 80’s all over again. 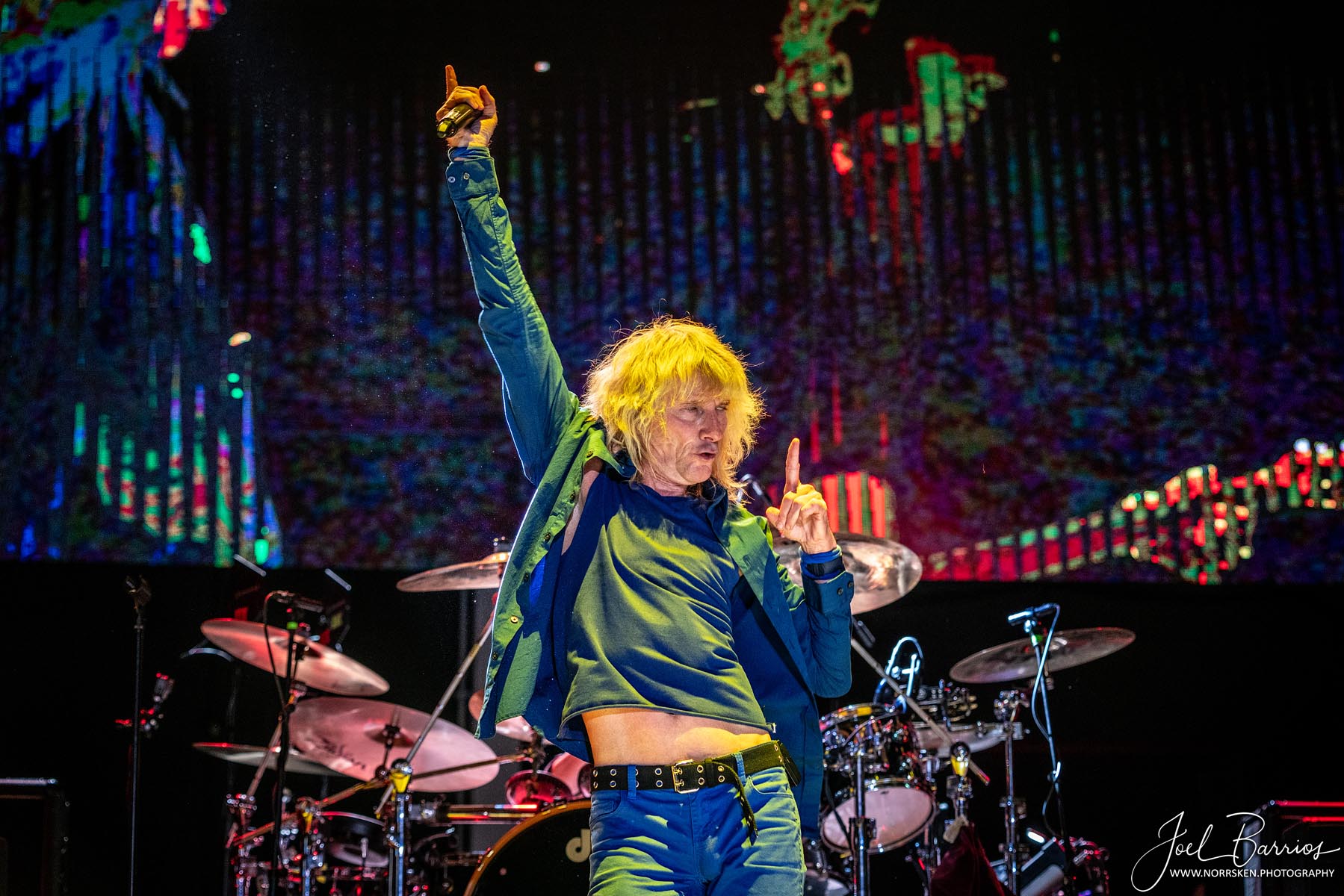 The first lights of twilight were falling upon the amphitheater when Tom Kiefer’s solo band took off. From the get go Tom’s signature raspy vocals took every fan in attendance on a trip down memory lane to the time when Cinderella were reigning in the late 80’s with songs like “Somebody Save Me” and “Nobody’s Fool”. Reality is that Cinderella music – despite being categorized into the “hair-band” genre – was built more on a blues based sound, and they were one of the most original acts to emerge, amongst many clones. The vast majority of the crowd was standing on their feet, and audience vocal participation was at a peak during songs like “Shake Me”, “Coming Home” and their monster ballad “Don’t Know What You Got (Till It’s Gone)” which brought my wife to tears. Accompanied on stage by his wife and current bandmates Tom looked like a renewed man, truly enjoying his life at the moment, and the band even threw a The Beatles cover towards the end of the 13 songs set to complete a very well-rounded selection and a truly soaring performance that gained a thunderous ovation lasting for minutes.

After  Tom Kiefer’s performance we left, without waiting for Vince Neil as the headlining band of the night. We had seen him recently and we wanted to ake sure to get some rest and be ready for the second day of the event. You can read how the second day of the Festival went down at this location.