The world has forgone live concerts for upwards of seven months at a conservative count, but live streams have seen a growing embrace as bands seek to satiate ravenous fans while supporting their latest creative outputs. There has been an array of approaches, ranging from one-man streaming setups such as those from Devin Townsend upwards to full-scale productions which afford the viewer an interactive experience, such as Behemoth’s latest production in support of “In Absentia Dei.” Electronic rock band Puscifer wholeheartedly embraced the trend of showmanship and rich production available in the digital environment with their “Existential Reckoning” livestream show, captured with numerous cameras, cinematic cuts, and a stunning venue of choice. In a performance which felt as intriguing as it was alien, Puscifer drank in the ethereal oddities of Arcosanti while welcoming viewers along with an extensive audiovisual adventure.

“Existential Reckoning: Live at Arcosanti” saw Puscifer take to the stage in the futuristic clutches of Arcosanti, Arizona, sowing the seeds for a live experience that was curious for all of its unconventional temptations. Premiering the same night as the release of their album “Existential Reckoning,” this live experience was a chance to experience the totality of “Existential Reckoning” in all of its immersive splendor. Before the first song began viewers were treated to a cinematic opening, shot in a dreary monochrome and punctuated by little more than the sounds of an arid desert. This introduction teased the first glances at the desert sprawling around Arcosanti, lasting only a few exploratory minutes before the darkness of the experience descended and the opening notes of “Bread and Circus” struck in their somewhat ominous timber. 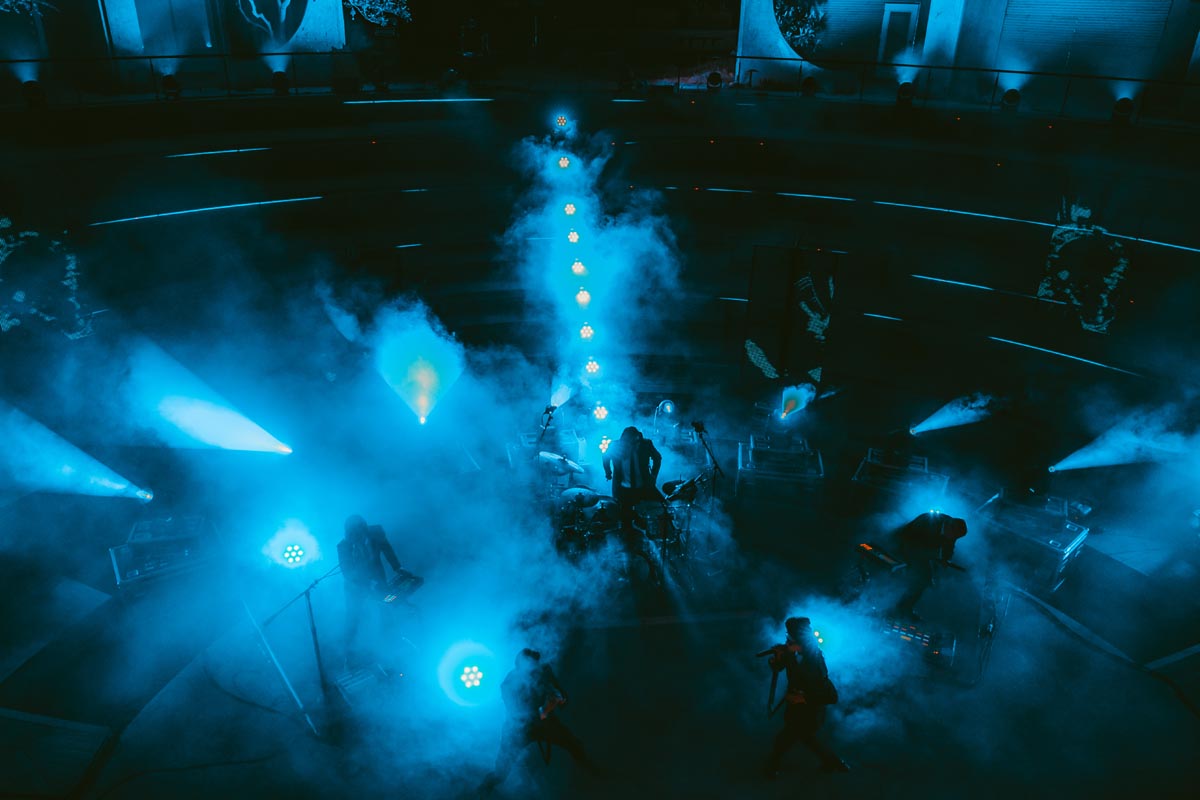 “Existential Reckoning” is a prime example of what benefits the steep livestream learning curve provides: the production of the entire experience grew beyond simply impressive and into the realm of the awesome. From the tightly choreographed performances on the part of the band to the sharp cuts in camera angles, the livestream felt more like an hour-long music video rather than  a live performance. There was no singular stage to speak of, growing apparent as camera angles opened up in second track “Apocalyptical,” in which vocalists Maynard James Keenan and Carina Rounds walked away from the rest of the band and up a set of stairs, each step perfectly in sync. As they sang and ascended in perfect time with the music there was an uncanny sheen to it all, the music coming through rich and flawless, none of the usual static of a true live performance to get in the way of consumption. In a way, its uncanniness speaks to Puscifer’s pursuit of perfection: there was not so much as a hair out of place, not a single off-beat footstep to be found. That alone is a feat few bands ever seek to attain, much less grow close to its mastery.

The changes of scenery viewers experienced seemed limitless, often obscuring the actual nature of the location itself through a combination of hazy smoke, creative angles, and a sea of shifting lights. There was an endless palette of hues cycled throughout the show, finding its start in a smoky red and shifting up to the artificial purity of blinding white. As the album drew towards its conclusion Puscifer were grounded by vibrant spotlights on dry Arizona ground, cacti casting shadows as they dutifully carried on throughout their performance. Throughout “Postulous” and “Fake Affront” the band played with a reserved passion in the desert midnight, casting an ominous aura through the notes which were as soothing as they were unsettling. 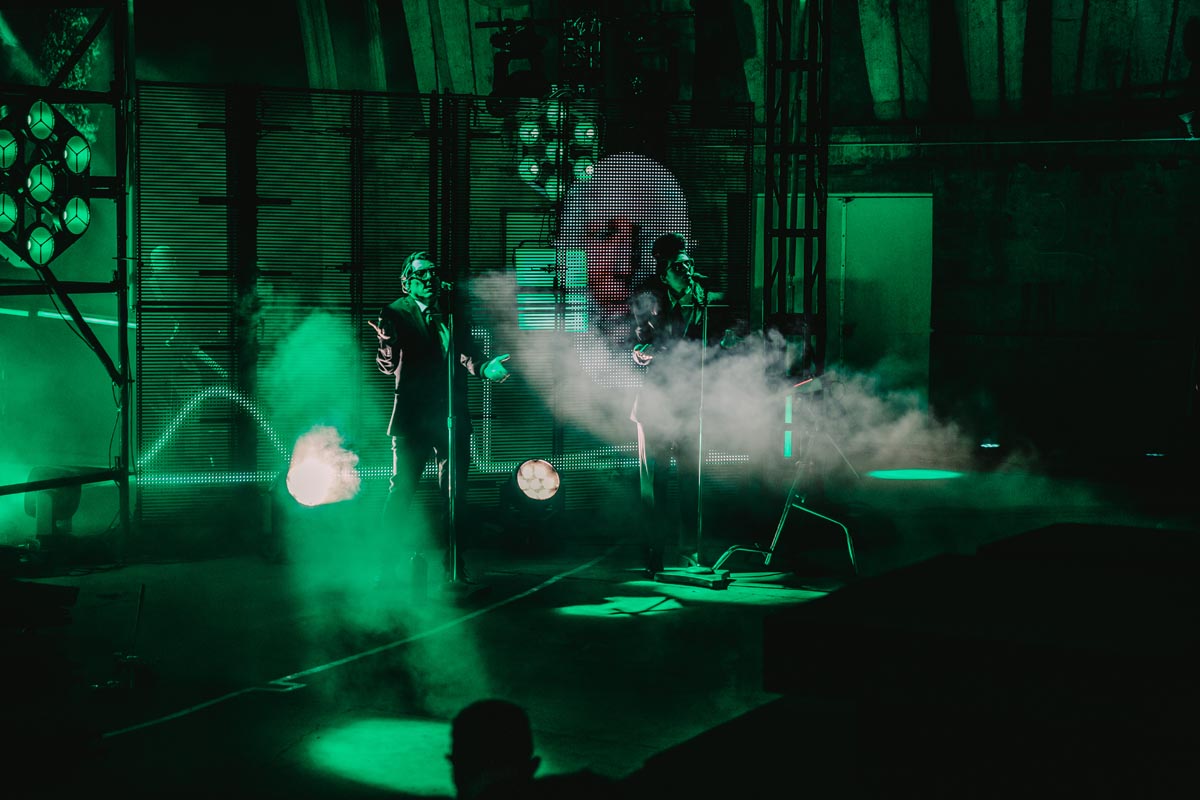 While Rounds and Keenan were left to lead the show, sunglasses, slicked hair, and attitudes in tow, there is no doubt that the show succeeded as a result of the band’s overall chemistry. Close shots of Paul Barker on bass give heart to the stream’s midpoint, and close-up shots of dutiful percussion allowed the more eclectic elements of the performance to remain rooted in the music.

In an experience that would be difficult to replicate in a true live environment the band experienced a sunrise through the end of “Bedlamite,” finally showing the futuristic depths of Arcosanti in all of its fantastic glory. In the dark there was an impression of something otherworldly, haunting, but it was as though the sun rose on a different planet altogether. The choice to shift from a cyberpunk-tinted gaze to something more natural and soothing as the performance progressed gave for an atmosphere that would be difficult to replicate. Ending on this imagery was something of a subtle embrace to conclude the shadows which had fallen over the majority of the set, forcing the sharp edges of humanity to bend to the organic. As the credits begin to role, the viewer is left to wonder if this conclusion is meant to give hope or further the established dystopian imagery.

Though the live experience of a concert was somewhat fractured as a result of production choices, there was also an unusual intimacy to some of the shots typically only reserved for the occasional music video. Shots above and behind the drum kit, as well as a clear view of the electronic effects and programming used by the band to create their chosen atmosphere, felt like an almost forbidden peek behind the curtain. While these are angles not afforded to viewers of a true live show, its inclusion made the event of a live-stream all the more enticing for viewers offered limited interactivity with the band themselves.

To some extent this indulgent display of production resulted in the viewer being forced to watch the experience through a director’s eyes, rather than the eyes of a fan. As though the screen were not a deep enough barrier between Puscifer and their fans, the choices in production and other creative choices such as extensive costuming (sunglasses included) drove away any chance to make something resembling a connection with the performers. Instead it was an opportunity to look on from afar as the musicians did their magic, cloaked in the glory of an unadulterated artistic vision. More than just a live performance, it was a living exhibit, one which combined many mediums for something greater than the sum of its parts.