Around the second week of November 2017, I had the opportunity to interview Grammy Award winning guitarist and producer Paul Nelson (you can read that article here). Later in the month my wife and myself were invited to one of Paul’s shows, when his extensive tour touched The Arts Garage in Delray Beach. Perhaps Paul’s name doesn’t ring much a bell, so in order to start this gig review with the right foot, let’s talk briefly about Paul’s career.

Paul Nelson is a veteran musician, songwriter, and producer, mostly known for being the hand-picked fellow guitarist to the legendary rock/blues icon Johnny Winter. He is also a trained session musician who has recorded or toured alongside many artists such as Eric Clapton, Derek Trucks, Slash, Joe Walsh, Ben Harper, Billy Gibbons, Joe Bonamassa, the Allman Brothers Band, among others. A multi-Grammy nominated and Grammy winner artist for his work performing and producing Winter’s “Step Back” album, which received the “Best Blues Album of the Year” award, reaching number 1 on the Billboard chart for blues albums, and number 16 on the Billboard 200, Paul has written/performed and broadcasted nationally on NBC and on multiple major album releases, books, instructional guitar columns, live Concert DVD’s, and guest performances on countless recordings. On December 18, 2013, he received the “Master Blues Artist” honor, making him an inductee into the New York Blues Hall of Fame, and he is also a recipient of the Blues Foundation’s KBA “Keeping the Blues Alive Award”. With this not only extensive but impressive resume, we were somewhat nervous to meet him before the show, fame is a dangerous drug that tends to turn ordinary and friendly people into socially detached beings in need of public adoration. 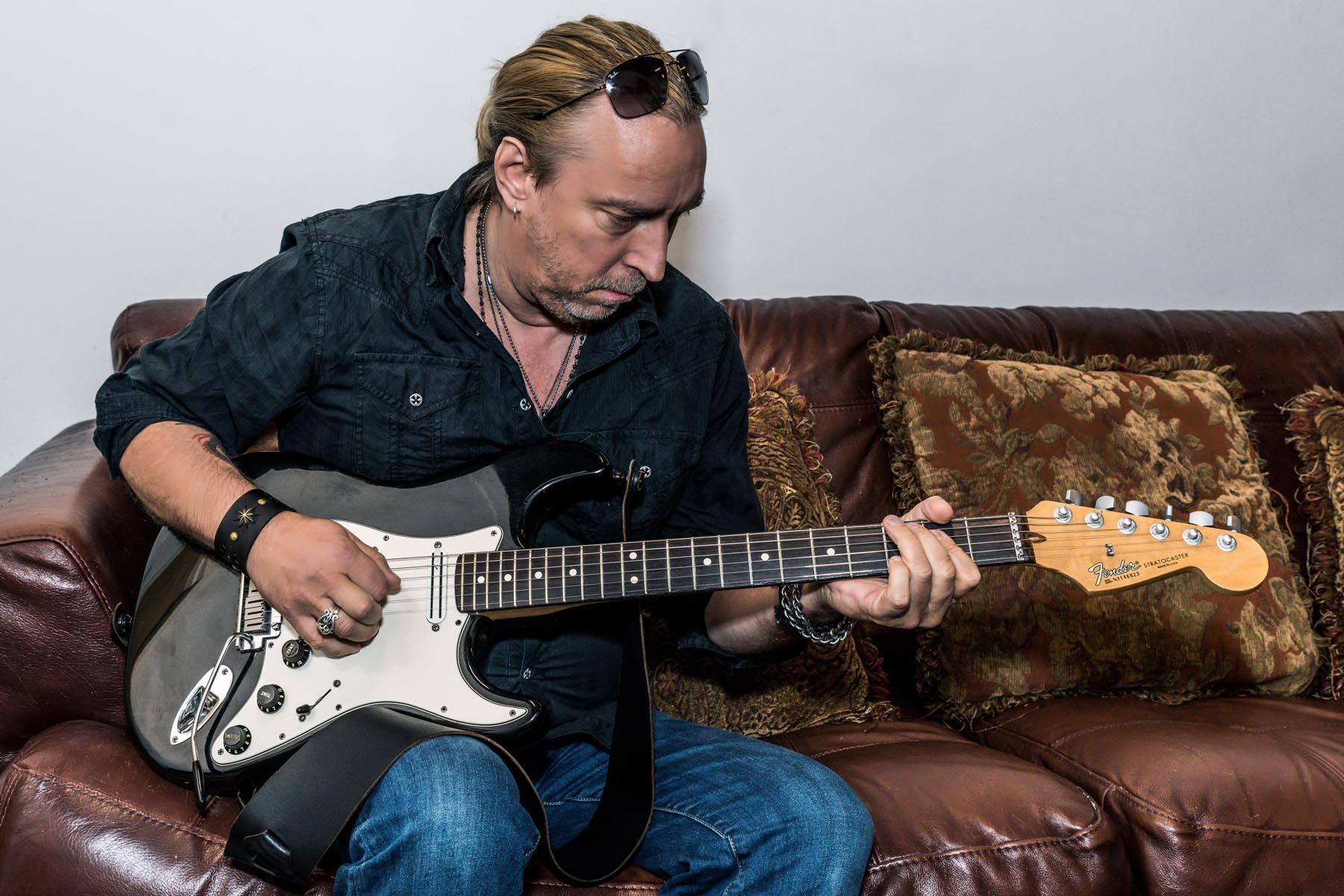 To our surprise, Paul Nelson is one of the humblest artist we have ever had the chance to sit with. He received us with a warm handshake and greeted us cordially following our initial introduction. Once inside his dressing room he sat in a couch in front of us both, and started talking like if we were old friends reuniting after some time apart. There was not a single glimpse of phenomenological celebrity in him: we felt completely welcomed. Our conversation prolonged for almost an hour, touching a variety of subjects: his work and dearly friendship with the late Jimmy Winter – whom he personally considers the best guitarist to ever live –, his points of views about the musician’s long road to fame in the music scene nowadays, his recently appointment to a non-profit organization… the warm and insightful chat went on and on.  Much like Winter did for his idol Muddy Waters, producing three Grammy-award winning albums for the blues icon late in his career, Nelson was instrumental in reviving his idol’s career. Nelson played second guitar at countless shows, produced Winter’s final albums, and helped him get healthy after years of abuse, and he described some of the moments he lived alongside Johnny with an combination of joy and sadness painted on his face. At some point the rest of Paul’s band made its way into the dressing room and we got to meet Go-Go Ray (drummer), Jeff Howell (bass) and his wife Linda, and Ethan Isaac (vocals). They joined the chat and Jeff’s wife even asked me to explain about what my flash diffuser was and why should I use it when taking portraits pictures. To say we were mesmerized about the unpretentious manners of them all would be an understatement. Paul started to warm up for the show and I snapped some pictures of him while doing so, and we decided it was time to leave the room and let them prepare for the evening, even when they keep talking to no end. Down-to-Earth musicians that just care about excelling at their job leaving behind pompous protocols, this was definitely an experience to remember and a good example of how a Meet and Greet sessions should go about.

The Arts Garage is a small (about 168 patrons), clean, and intimate venue located in Delray Beach, which offers a great chance to enjoy jazz, blues and classic rock shows. With largely unassuming exteriors and managed by a non-profit organization, the place is all about bolstering the community’s art offerings through concerts, plays, spoken word events, community round tables and even an arts academy. We took a table near the back and got ready to enjoy the rest of our night, feeling extra pumped after such a fantastic time backstage. The band appeared and after a short introduction they jumped straight into business with “Don’t Want No Woman”, followed by “Killing Floor”, played with combination of joyful and boisterous energy that would last until the very ending note. There were mood changes throughout the set that included some of the greatest blues songs ever written, going from more classic blues tunes like “Dust My Broom” or Johnnie Winter’s interpretations of “Black Jack” , to slow-paced anthems like Blind Faith’s “Can’t Find My Way Home” or “Roadhouse Blues”, to more rock infused tracks like “Keep it All Together” and “Evil”, both extracted from Nelson’s latest album “Badass Generation”. Half way through the first set Ethan formally introduced bassist Jeff Howell as a past member of Foghat and Savoy Brown and then in a couple of occasions Jeff alternated vocals duties with Ethan, for delightful renditions of classics like Savoy Brown’s “Bad Intentions” and the Foghat’s  crowd-pleaser “I Just Want to Make Love to You”. The track selection was more like a blues’ lover wet dream.

There’s a reason why Paul Nelson is revered the way he is. His playing was superb, meticulously tight, clean, and particularly elegant, never overdoing or going above the rest of musicians, bringing the right tone and pace to the music. Technically dazzling and with a ferocious control of his instrument, his notes carry a personal touch, a groove of his own. And he was backed by a chops-galore band. Jeff Howell on the bass did an incredible job accompanying his guitar partner, he was absolutely on fire! Moving from one corner of the stage to the other, his powerful bass lines seduced the audience to move along the bluesy and rocking rhythm. His strong and raspier voice gave a particular feel to the songs he interpreted (counterbalancing Ethan more soulful voice) while his constant engagement with the audience forced every present to pay close attention to what was happening on stage. Howell exuded talent and charisma, he is a show on his own and add the exact dose of charming to a band where the vast majority of the time Nelson is painting pyrotechnics over a solo. The talented Go-Go Ray gave the drums a beatdown with his precise and authoritative playing style. At some point we would get the feeling they were just fooling around like nothing was previously rehearsed, as if the music was something natural coming out of them that needed no effort to surface: a really smooth blend of great musicians in one single band. And then there was Ethan Isaac, the main singer, a voice made to sing Blues. Sporting a powerful and vibrant register, which is sweet, melodious and high-pitched when needed, his performance invited to tap the beat and sing along throughout the entire set.

After more than 90 minutes of music, the band revered out and abandoned the stage, to return shortly after amidst the crowd’s clamor for one more song. They played a stunning rendition of the ultra known Chuck Berry’s “Johhny B Goode”, with  Paul searing guitars heating up the stage, but they didn’t stop there: taking things a bit further they dared to close the curtains with a balls-to-the-walls version of “Whole Lotta Love” as the final encore. Led Zeppelin’s defining song – obscene, brutish and utterly awesome –not everyone can do justice to Robert Plant’s squealy and dirty vocal lines. But Ethan rose to the task, leaving the theater in awe with a lung-ripping performance, while Nelson’s pumping riff added the impeccable bruising to end the night in the highest possible note.

Showcasing a power-packed display of talent from beginning to end, and led by a gifted guitarist with a muscular tone and superb slide style that honors his pedigree, this band simply rocks, both literally and figuratively. Do yourself a favor and check them out when they play near you, surely you will thank me later. And don’t forget to scroll down to view some pictures of that memorable night!