Sometimes a change at the lead singer position ends up taking the band in a radically different direction. Phil Collins with Genesis is exhibit A. Other times, the band can change singers yet still remain pretty true to their previous vibe. Journey with either Steve Augeri or Arnel Pineda is Exhibit B. Then there’s a third situation, where the new singer not only is an upgrade to the sound, but actually has the ability to transform the old songs to something far more listenable. Ladies and gentleman of the court, I give you Bruce Dickinson of Iron Maiden. What’s that? You say you want an example of a female having the same impact? Let’s go with Floor Jansen of Nightwish. A case she proved in Denver last Tuesday night.  But first, a little history lesson.

Nightwish burst onto the scene in 1997 with a rather strange mix of symphonic metal that paired heavy guitars and bombastic keyboards with fragile, operatic female vocals provided by a rather unknown singer named Tarja Turanen. Their third, fourth and fifth studio records nabbed the number one chart position in their native Finland, and with each release, their legion of worldwide fans grew larger and more passionate. I wasn’t one of them. I saw Nightwish live in 2003 at ProgPower USA in Atlanta. I didn’t know their music then, and I was relieved when they left the stage. I just didn’t find the songs with her operatic delivery very listenable. I was comfortably—but admittedly—in the minority of the crowd that night.

Then in 2005 came what can only be described as a classic case of “How not to break up with your lead singer.” The rumor was the band completed filming a DVD ironically called “End of an Era” and then informed her via an open letter that she was no longer a member of the band. The letter can still be seen online. As can tearful interviews with Tarja. The bad blood ran everywhere, and started a civil war among the fan base. Nightwish Era One had come to a close. In 2007, Nightwish announced Tarja’s replacement, Anette Olzon, who brought a far more pop sounding voice to the material. Fan reaction was mixed, and even at times cruel. The worst in people was brought out in online discussions of Tarja vs. Anette. People were passionate but unkind. There’s no denying that Anette changed things in Nightwish, somewhat like Phil Collins took Genesis in a more easy to digest fashion. For this listener, she opened a door and Nightwish became listenable for the first time. Dark Passion Play and Imaginaerum were more accessible and memorable for many, but utter betrayal for others.

So when Nightwish came to Denver in 2012 on the Imaginaerum tour, I was eager to see if Anette could deliver onstage what she did in the studio. Unfortunately, she ended up in the hospital and was unable to perform. What we got instead that night instead was a karaoke version of Nightwish with the crowd and a few volunteers from the opening band trying to fill in for her. It was an amusing case of the show must go on, but once again I failed to be wowed by Nightwish live. Soon after it became clear that this unique show also signaled the coming dawn of Nightwish Era Three. As if they learned nothing from their first band/singer breakup, Nightwish again endured a public relations nightmare with online sparring between the two parties leaving fans opinionated, irritated and uncertain. Floor Jansen was called in to salvage the rest of the tour. And by all accounts that’s exactly what she did. She made such an impression on the band that it was soon announced Nightwish Era Three was underway. With Floor on the microphone, a strong studio record eventually materialized with 2015’s solid Endless Forms Most Beautiful. And so once again I set out to see if Nightwish could finally deliver a truly satisfying live experience. 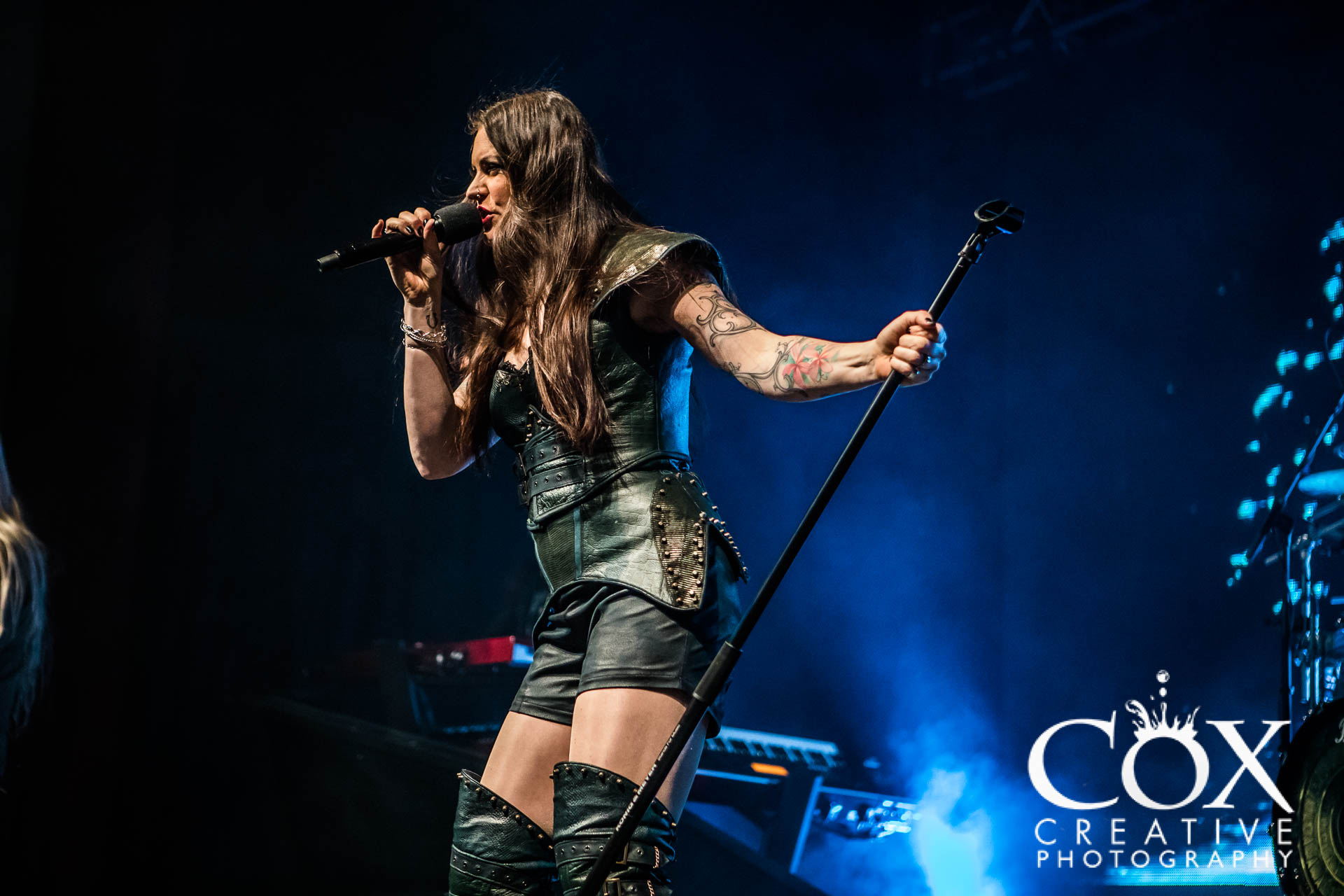 The current “Decades” tour is promoting a 2CD compilation of material from the entire catalog. It documents all three eras and the changes that came along with each new lead singer. After a thorough frisking by security at the entrance of the Paramount Theater, concert-goers were handed a shrink-wrapped copy of “Decades.” A nice bonus to the evening, even if many in attendance already owned most (if not all) of the material it contained. The show opened with a solo performance by former Iona pipes player Troy Donockley, who joined in 2013 and brought a new flavor to the band with his Scottish Uileann pipes and clear pronunciation of the English language from the stage. Donockley’s intro bled into full band raucous renditions of “End of All Hope” that brought the reserve seating theater audience to its feet, where they stayed the entire evening.

Before the show started, Floor Jansen was the question mark for me. Would she be haunted by the ghosts of singers past, or own the songs and the stage in a way that made Nightwish Era Three the definitive edition? Midway through “Wish I Had an Angel,” Floor became an exclamation point. Her stage presence was supremely confident, her wardrobe no doubt eye-catching and her head-banging, hair twirling rock stance when she wasn’t singing combined to win over any doubters that remained in the crowd. She danced throughout the entire performance of “I Want My Tears Back,” seeking a chance to catch her breath when it came to an end as the crowd reached its loudest pitches of praise. Donockley took over the lead vocal on “The Carpenter.” Despite the variety of instruments he played, I would have liked to have seen him featured a bit more, as he really brings a fresh and fascinating aspect to the sound of Nightwish.

The setlist emphasized Nightwish Era One with Tarja, and while Jansen proved capable of delivering the operatic twinges of the older songs, such as “The Kinslayer,” she often brought a more rocking tone to the tracks, which transformed them somewhat from songs I’d written off in the past to more likeable and interesting. This was especially true in her version of “Nemo,” a good song and crowd favorite that just works better with Floor at the helm than her predecessors. The crowd reached a new pinnacle of applause upon its conclusion, and Floor expressed her appreciation for the crowd and their acceptance throughout the night. 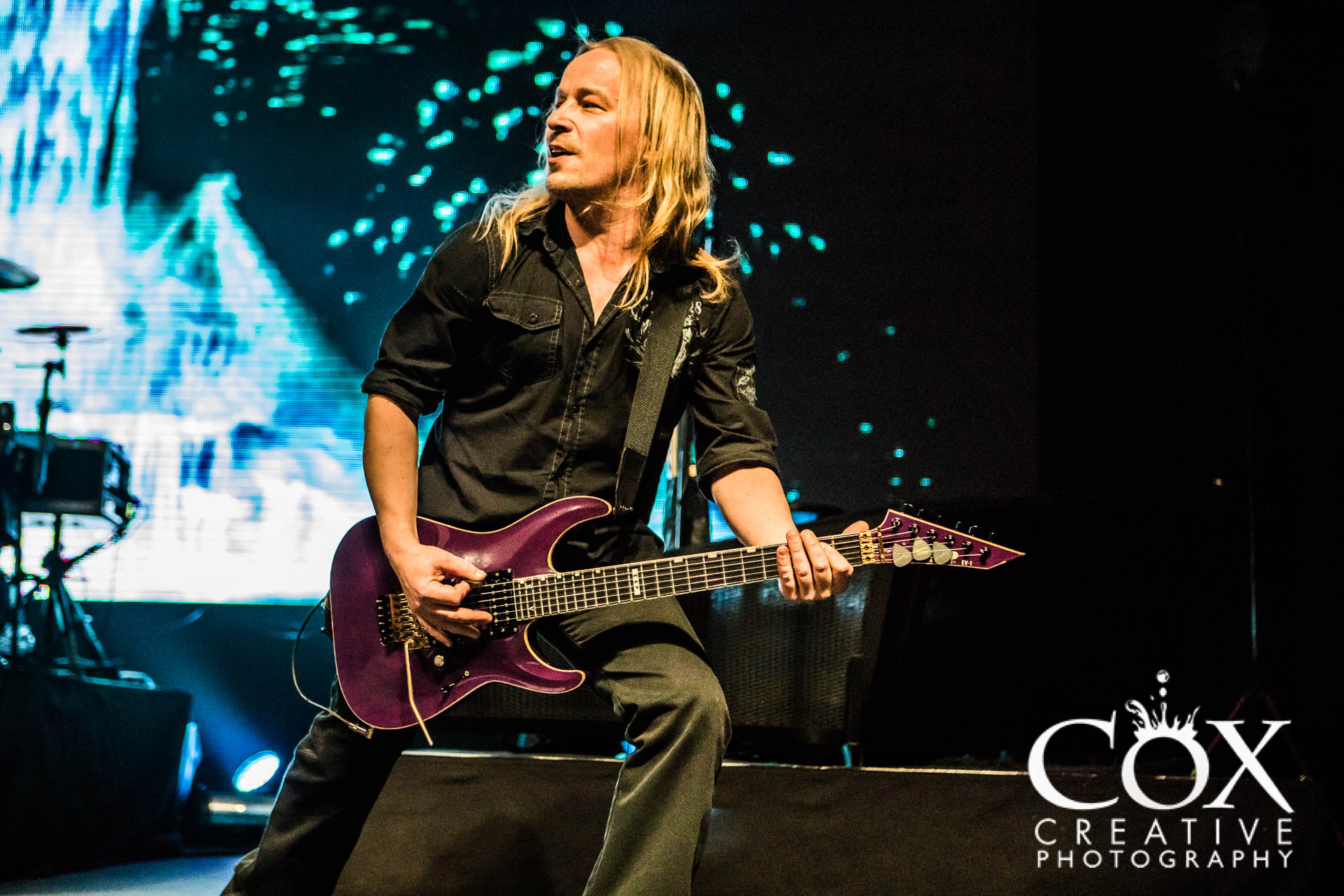 By all accounts, keyboardist Tuomas Holopainen is the primary creative force behind the music of Nightwish. The band is his vision and the songs are primarily his compositions but he assumed a fairly laid back presence in the live show. It was almost as if he wanted Floor to shine and be as much of a commanding frontwoman as possible to accelerate the end of arguments about who was the best female vocalist for Nightwish. Guitar player Emppu Vuorinen played bigger than his 5’3” stature might suggest, delivering consistently chunky rhythm playing and flashes of whammy excitement. The rhythm section of Marco Hietala (bass and lead vocals) and Kai Hahto were slightly unspectacular but musically very solid. Nightwish brought an impressive stage production to augment their music. The light show was appropriately frenetic and mood enhancing, and a large video screen behind the band displayed some impressive video that was effective eye-candy, especially on “Devil & The Deep Dark Ocean” and “The Greatest Show on Earth.”

The set ended with the cinematic “Ghost Love Score,” and at the high climax ending, Floor sang a progression of notes that sealed her place as the right voice for Nightwish. It was powerful and resulted in a high five from guitar player Emppu Vorinen when completed. It stuck with me as I walked out to my car. I wanted to hear what I had missed before on that song, so as I was driving home, I popped in the giveway CD I received at the show and dialed up the track, fast forwarding to the ending. I listened closely. But the notes weren’t present in the Tarja’s version. Right then it hit me that this was symbolic of how Floor brought something new to the older songs and upgraded them to something better.

All combined, Nighwish Era Three proved that the third time’s the charm for me, and I left feeling very satisfied with what I witnessed, and secretly wishing that the free “Decades” collection featured Floor’s renditions of the entire back catalog. One can only hope there won’t be a Nightwish Era Four anytime soon.