The “Savage Imperial Death March Tour” (as it was dubbed) was touching Fort Lauderdale on a Thursday night and I decided to swing by to behold some forward-thinking extreme musical madness, headlined by none other than the fathers of grindcore: Napalm Death. The British extreme metal band is credited as pioneers of the grindcore genre by incorporating elements of crust punk and death metal, using a noise-filled sound that uses heavily distorted, down-tuned guitars, grinding overdrive bass, high speed tempo, blast beats, and vocals which consist of growls or high-pitched shrieks, accompanied with heavily sociopolitical lyrics. They have consistently put out good material since they formed in the late 80s (although none of the current members have been in the band prior to 1987) and have been melting our ears off with sheer sonic terror since the early eighties. In addition to that they’re also known for being one of the best live bands in extreme metal. After that night I must say that if you have never seen Napalm before, then you have to be prepared to have your head blown off. 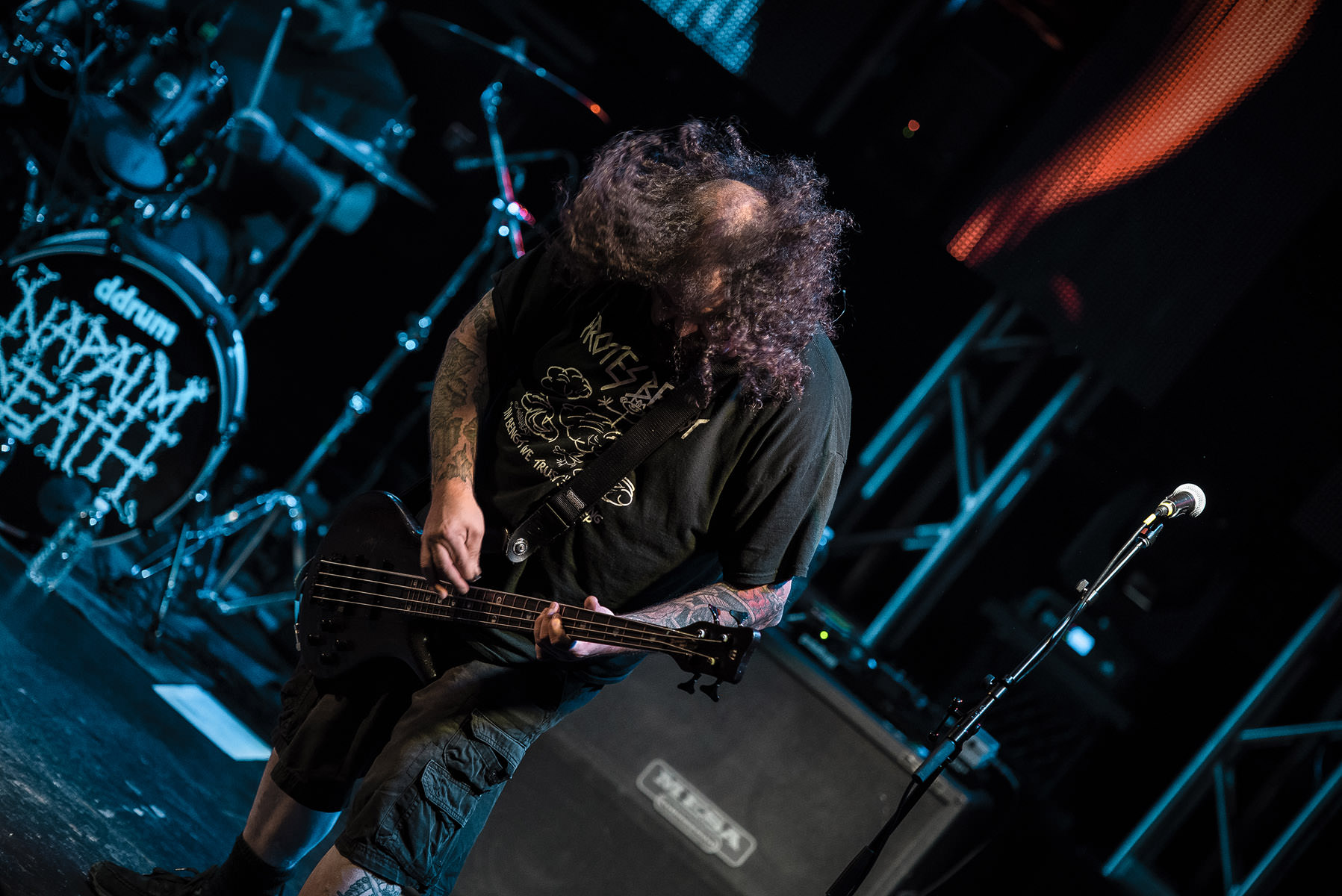 The minute stagehands had cleared equipment from the preceding band, three members of Napalm Death walked slowly on stage, while a clamoring audience received them. The fourth, singer Barney Greenway dressed in shorts as always, ran on stage from the wings, picked up his microphone off the ground and basically turned into a human tornado. I have never felt so much energy come off of a stage before! He was absolutely insane and the band matched his running energy with a ferocious playing, taking no prisoners. They showed that their age was not slowing them down a bit, and this burst of energy from the stage kicked the crowd in the black denim immediately. The audience launched right back into chaos mode, hell, I even saw a guy in a banana costume going nuts in the center of the mosh pit. As I watched Barney Greenway shaking his head like a wet dog, I thought how impressive is he had been able to keep his growls intact after all these years. He was as spastic as ever on stage, pacing back and forth between bursts of vocal rage and showing that he’s still one of the most ferocious live vocalists in metal while his partners in crime delivered a devastating mixture of sonic noise, syncopated and precise time changes, and blazing tremolo-picked riffs. I was especially impressed with Shane Emburys’ bass sound and performance- it cut through the mix like a scalpel with a perfect, glassy sound; and it was fascinating to hear blast beats, as played by Danny Herrera, come from a double-bass drum, since these songs were recorded with only one.

Their set contained well balanced material from their most recent albums, while including key tracks from older albums throughout the set, taking the audience back to “Scum” and “Harmony Corruption”, which for me particularly was the real highlight of the set. Obviously their infamous Guinness record-holding shortest-song-ever-made did an appearance (It is precisely 1.316 seconds long), tearing a ferocious outcry from every corner of the venue. The band still has an element of excitement and played a completely unrelenting, thoroughly amazing set from start to finish whilst the sweaty audience loved every minute of it. They are immaculate showmen and continually build upon the genre they helped define more than 3 decades ago. NAPALM DEATH never disappoints!