The German guitar slinger’s current tour is traveling under the moniker: Michael Schenker Fest. While the merits of that name can certainly be debated, the quality of performance that he and his 4-man vocalist band delivered in Denver on March 29 really can’t really be disputed.

From the opening licks of “Into the Arena,” Schenker was bathed in a white hot spotlight for the entire lengthy set. Any why not? If we’re being honest, the songs of Michael Schenker are mostly launch pads for his fluid, melodic lead solos, which are what the crowd is primarily there to see. As a result, that relegated the rock solid but visually subdued rhythm section of Chris Glen (bass), Ted McKenna (drums) and Steve Mann (guitar and keys) to supporting background status. Still, they managed to shine a bit simply by providing such a consistent and tight foundation for Schenker’s string play. The second spotlight was progressively filled over the course of the evening by four different lead singers who have recorded with Schenker over his nearly three decade long solo career. Gary Barden, who bore an uncanny resemblance to Ted Nugent in a cowboy hat, started things off with some of Schenker’s early classics, including “Let Sleeping Dogs Lie,” “Cry for the Nations” and “Attack of the Mad Axeman.” The band’s lengthy setlist is a celebration of Michael’s past and present, with the upbeat “Messin’ Around” from Schenker’s newest release holding the crowd attention as strongly as the classic material. 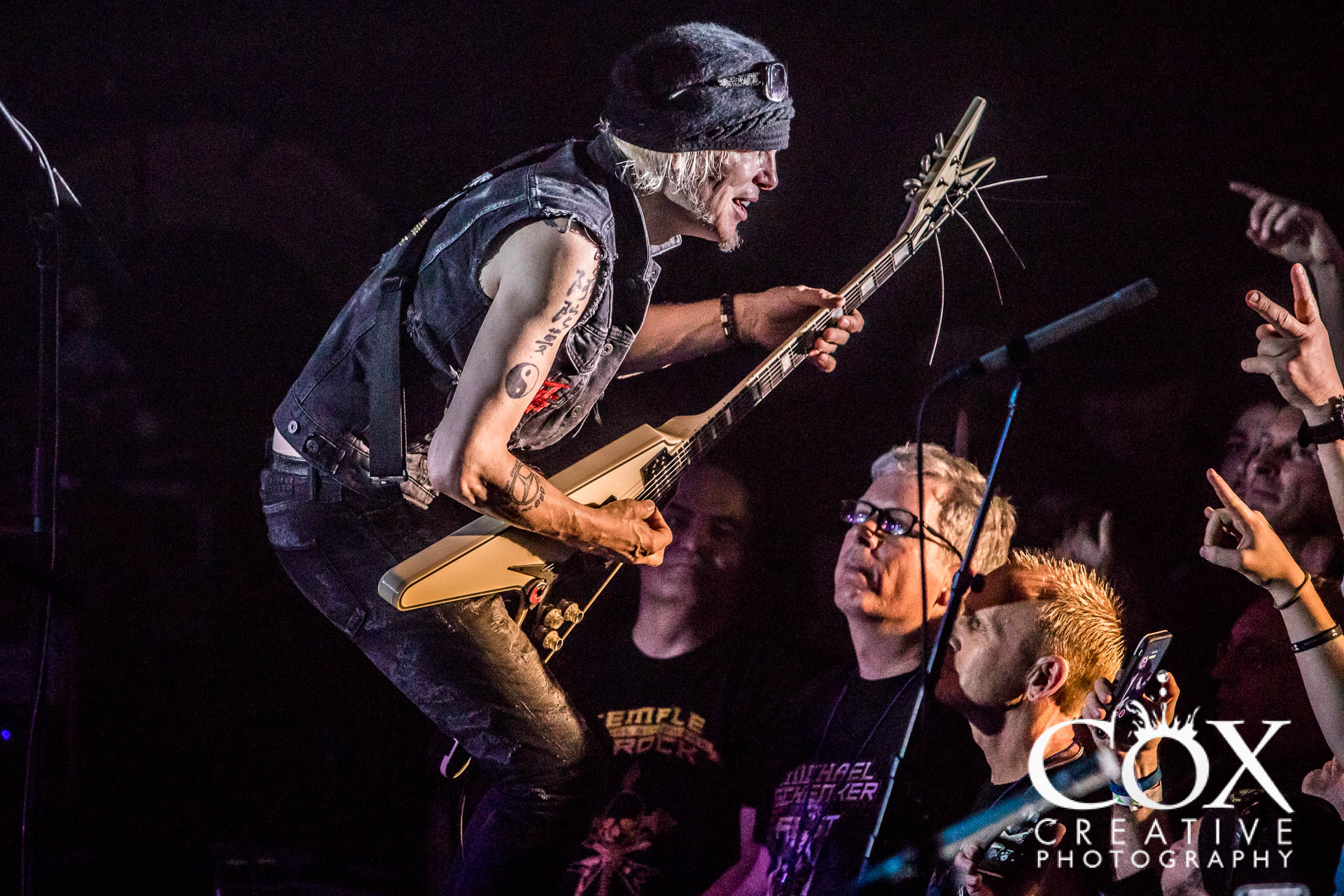 Schenker made a seemingly personal point of telling the crowd that it was he who wrote the sublime song “Coast to Coast” and gave it to his older brother Rudolph of the Scorpions as a gift for the Lovedrive record. The band played an authoritative, slightly slower version that lend credence to his claim that the ultra-hummable instrumental was, in fact, his baby. The vacant singer spotlight was then pierced by a leather jacket-clad gentleman whose slicked back hair and sunglasses couldn’t hide the fact that he was 70 years old. But when Graham Bonnet opened his throat and let loose with the angry sounding wails of “Desert Song,” “Dancer” and “Assault Attack,” he made a strong statement that age is just a number, and together with the 63-year old Schenker, they proved to the mostly mature audience that if you still have the goods, you’re never too old to rock.

Attending any rock show these days of a band that peaked commercially in the 80s runs the risk of resulting in a sad sentiment that some artists have simply stayed too long at the party. To the relief of many in the room, Schenker actually sounded fantastic—better than he has on many previous tours. Credit that to his newfound sobriety and inexplicable elimination of stage fright that haunted him for years. Props must also go to a combination of the venue’s acoustics, the mixer’s handwork and the technology of Schenker’s iconic Flying V Dean guitars and Marshall stacks because his signature tone cut through and floated over the top of everything else—right where it belonged. In fact, one couldn’t help but feel that Schenker really wanted to be playing for his audience and was having a really good time doing it. He donned numerous rock faces and stances, interacting with the front row fist pumpers constantly. The entire band was bathed in a never ending wave of smiles, supportive leans and signs of personal satisfaction, with Schenker individually hugging and showcasing each lead singer’s contribution at the end of his series of featured songs. They were almost too happy for the hard rock vibe of the music. Almost. But why shouldn’t everyone in the room be having a good time?

After gliding through the lyricless “Captain Nemo,” it was Robin McAuley’s turn in the singer spotlight. Previously providing back up vocals on “Dancer,” Mcauley quickly claimed his lead pipes position with strong deliveries on “Bad Boys,” “Save Yourself” and “Anytime,” as well as “Heart and Soul” from the new record. McAuley twirled the mic stand, bringing an elements of 80s rock showmanship and confident singing to each of his tracks. The fourth singer to seize the spotlight was Doogie White, from Schenker’s recent Temple of Rock period, whose Scottish tinged voice raced through “Live and Let Live,” “Vigilante Man” and “Take Me to the Church,” all demonstrating that Schenker’s newer material can justifiably stand alongside the classic catalog. 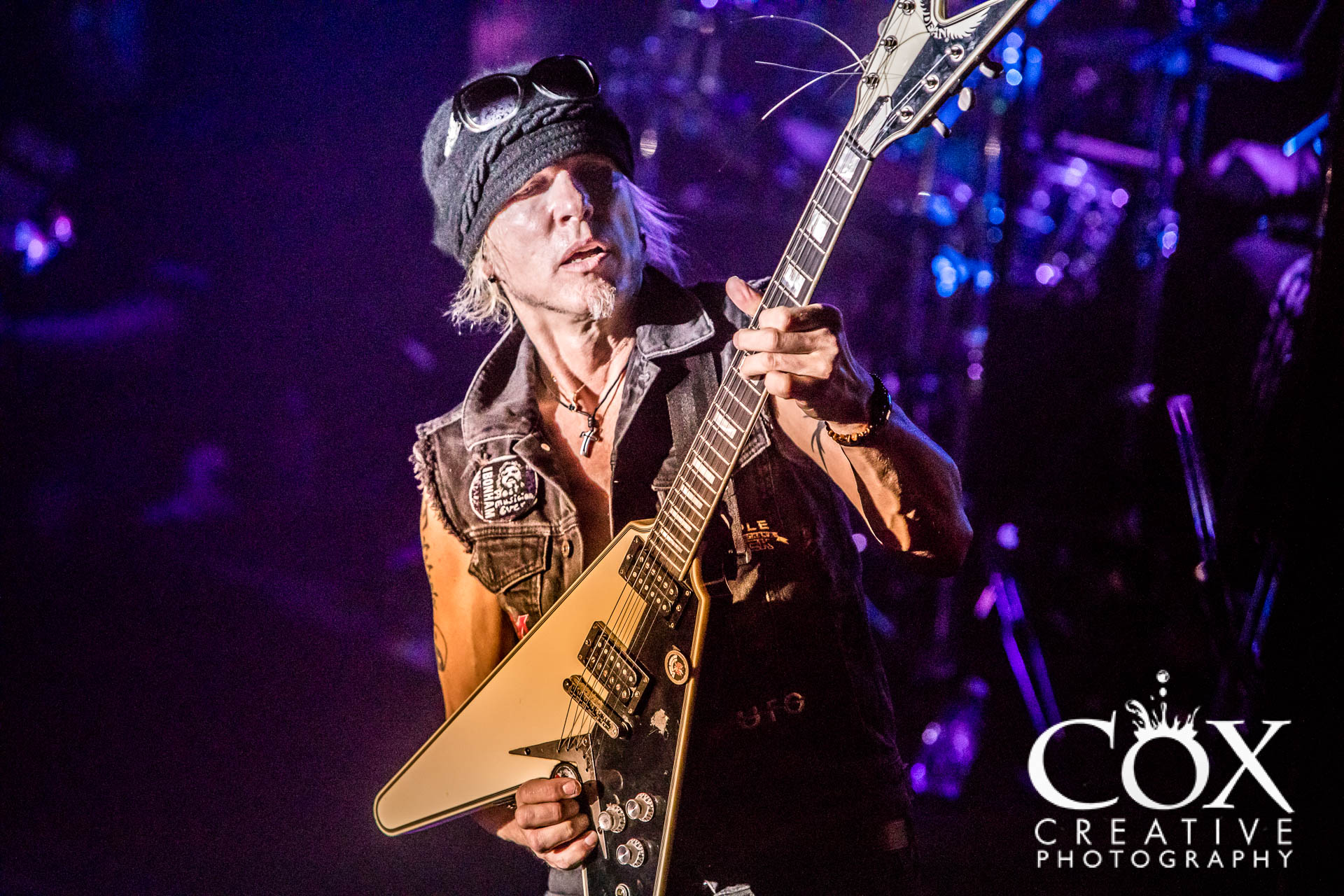 Most of the night, the four lead vocalists would float in and out to provide key background vocal sections with cohesive harmony. One track from the new record, however, failed in execution compared to the rest of the show. “Warrior” (a featured single from “Resurrection”) features all four singers trading lead lines and combining on harmonies, but whether it be due to the altitude, an in-ear monitor problem or the depth of the lengthy setlist, it just sounded really off key. This low point was soon forgotten when Schenker launched into the guitar tour de force that is UFO’s classic, “Rock Bottom.” With its extended solo section, it served as the exclamation point of “Schenker is back!”

It’s funny how things can change. For years, Michael Schenker’s musical talent has been tainted by his erratic behavior fueled by substance abuse and questionable mental health. YouTube has merciless evidence documenting just how low he could go. The only predictable thing was his unpredictability. On this tour, however, it’s his consistency that stood out. The new record Resurrection features cover artwork of the band parodying The Last Supper. The title and imagery could easily be referencing the nearly miraculous return to the form Schenker’s now putting on display. In 2018, when many of his peers’ performances are steadily declining, Schenker has seemingly been raised beyond his troubles and is now preaching to the faithful with nimble fingers and a maniacal smile that his legendary reputation was, in fact, well deserved.

That is something worth celebrating. Something rather festive. And for that we can give thanks! In fact, one just might have to confess that the name of this Michael Schenker FEST tour is actually a lot more on track than previously believed.