After releasing his latest record Inferno to rave reviews worldwide in 2015, Marty Friedman put an end to his long 10 years absence from US stages and completed a very successful West Coast tour leg. Now he is again on the road, as part of the second leg of the tour supporting the album, and his next tour stop will bring him to Backbooth, a small venue in the very heart of Orlando, Florida. I’ve had the opportunity of conducting a brief interview with Marty over the phone the week prior to this show, and he was extremely polite and answered all my questions in a very thoughtful manner. The next logical step was to witness one of his band’s performances, and my wife and I drove three hours and a half to be able to see with our own eyes what we’ve read and seen online about his live shows.

We got the VIP passes for a Meet and Greet with Marty (worth to mention they were offered at a very reasonable price, opposed to nowadays trend which find bands offering fans these opportunities for exorbitant and outrageous sums) and we were granted to go inside the venue and behold part of the sound check. Standing at the stage, there was the man responsible for many of the most memorable riffs ever written in metal, the same one who took Megadeth to another level during his tenure with the band, and the same one who left the band and gave his life a 360 degrees turn leaving to Japan without a contract in hand, and building a successful career playing a completely different type of music, while at the same time becoming a respected TV personality. 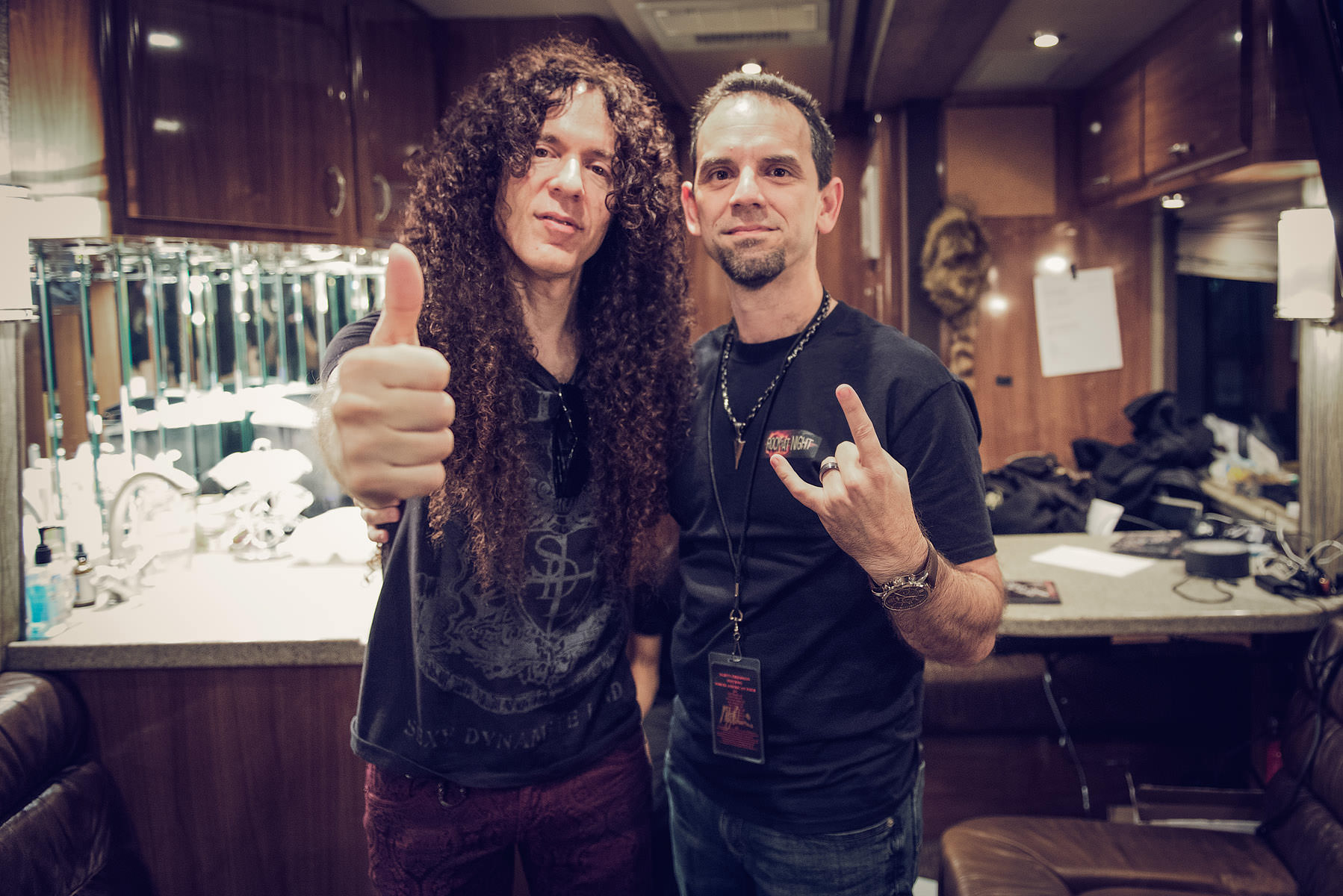 Marty Friedman and myself before the show

When the sound check was over, we were taken to the back of the venue and told to line-up in the sidewalk by the tour bus. The VIP experience was conducted inside the tour bus, something I’ve never seen before (and believe me, when I say I’ve been to many Meet and Greets with musicians). And on top of that Marty met each fan, one at the time, turning the Meet and Greet into a personalized experience. This gesture alone speaks by itself of the way he values his fans. We had a very interesting talk. He asked my wife about her name and he immediately loved it, despite the fact it is a Cuban name not so easy to pronounce in English he kept repeating it while smiling. He signed every single album cover I brought, gave us a CD including a collection of music he has played and produced in Japan (a CD, which by the way, is impossible to find in the US) and graciously took several pictures with us. It was one of the most down to Earth and natural Meet and Greet experiences I’ve ever been to–if not the very best. We left the tour bus and headed back to the venue to ensure a good front row spot as I wanted to take the best possible pictures of the show. The overall lightning in the venue was poor, and I knew the task of getting good shots would be daunting.

It was almost 9:30 pm when Marty’s band finally appeared and they gathered together around the drum-kit turning their back to the crowd, raising their hands, and joining their fists in a circle, like some sort of a ritual while repeating phrases I couldn’t hear because of the impending clamoring of the audience. After a minute they faced us, and the show began… and this is the part where I would love to have the power of time traveling, to transport the reader to that moment as I think words will fail to accurately describe our experience. Let’s take something out of the way, immediately: Marty’s music is almost 90% instrumental, therefore, there’s no “engaging front-man repeating well-known lyrics while interacting with the multitude” here. However, there’s no need for–whatsoever.

I’ve attended many, many concerts ever since I came to live in the US eight years ago. I’ve been in the crowd for Testament, Megadeth, Slayer, Anthrax and the likes, hence, I’ve experienced energy, moshing and ardent fans head-banging like crazy. And I’ve also seen Joe Satriani, Guthrie Govan, Steve Vai, Eric Johnson, and many others; so I am no stranger to virtuosity and flawless playing while mesmerizing the eyes of those standing in the audience. But I’ve NEVER, and I mean NEVER seen such a ruthless and perfect combination of the two encapsulated in three skinny guys and a Japanese girl. Saying that the band was on fire is a complete understatement. They played in a way one cannot describe. It looked like they had a covenant with the devil and the gates of hell had broken loose through them. It was not about shredding– it was all about power and connecting the fans with it.

But it was not only Marty’s unparalleled guitar skills which made this show special, but also his supporting band: Looking at Kiyoshi Manii (the bass player) before she started playing would lead anyone to the picture of a typical and timid Japanese girl in a cute red dress. But after the first note she becomes something else. She gives the impression of being possessed by an uncontrolled and dark energy and she simply cannot stop. She plays her bass slapping it mercilessly, and the grooves are infectious and relentless without missing a note, while the energy exudes through her movements. There was a moment when she even offered a rocking bass solo leaving the crowd static. 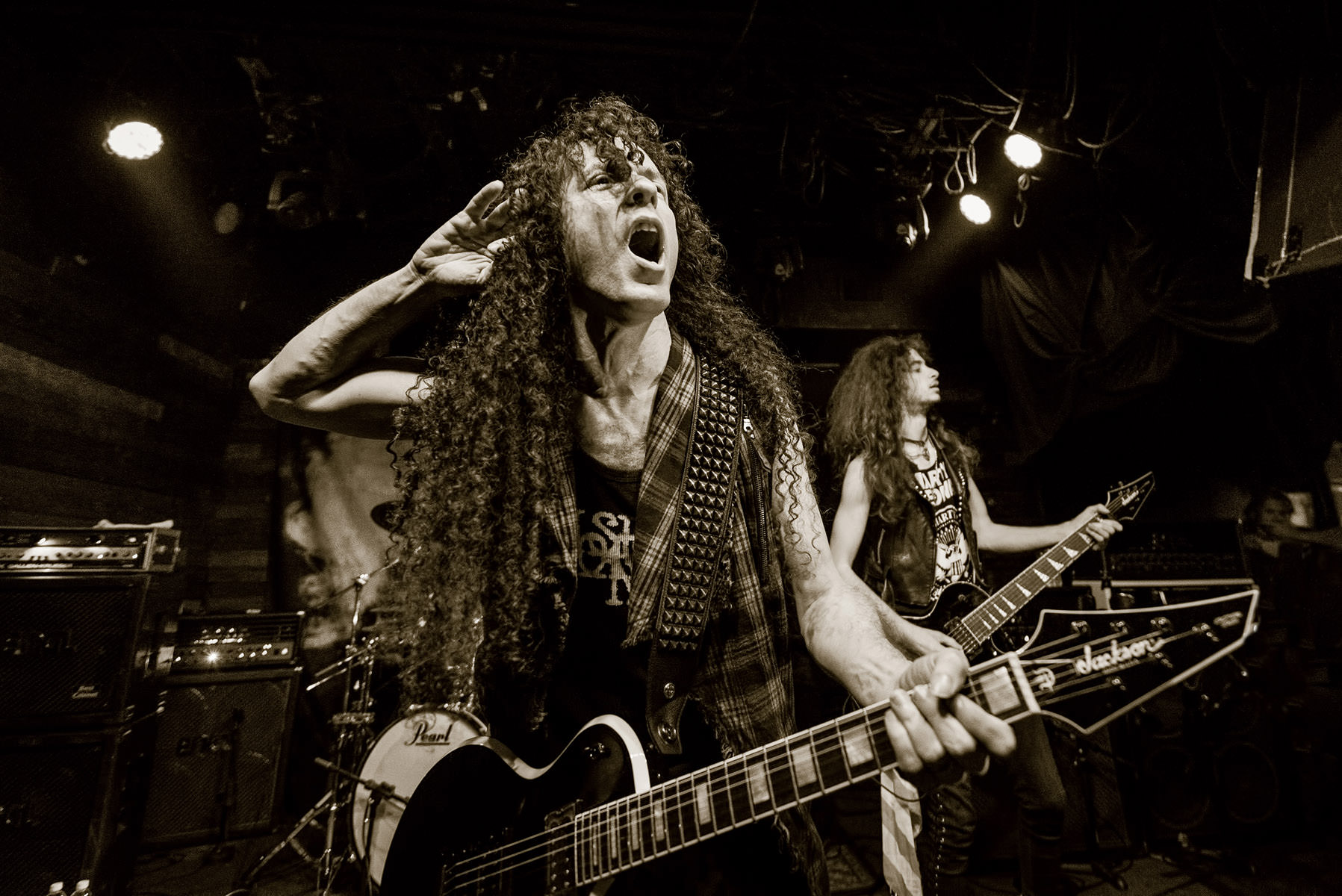 Marty Friedman (front) and Jordan Ziff (back) playing in Orlando

Guitarist Jordan Ziff, described by Marty as “The motherf***r with the hottest girlfriend on the planet” is a very young and extremely talented guy, who held more than his own and ripped some otherworldly solos while backing Marty’s guitars flawlessly. I haven’t heard of him before, but if at his 24 years he plays like this, we may be beholding the rising of a new star. And finally Chargeeee, the drummer, who looks like taken out of a Hollywood’s movie. Marty introduced him like “And in the drums… I don’t even know what planet this motherf***r” came from” and if something is true in that statement is the fact he plays like if he had landed in an alien spaceship a minute ago and he had brought some kryptonite with him. As a matter of fact his stage name couldn’t be more accurate, as he is completely and effing “Charged” with a level of adrenaline like no other. His drumming is so powerful and at the same time he looks so skinny and fragile that you are constantly wondering where the hell all that strength comes from? He looks like a freak and plays like a beast. That sentences sums it all.

And I believe I don’t have to remark about Marty’s playing, do I? He is simply a guitarist of another league, one that makes the guitar sing in his hands. He has such an un-orthodox and impeccable technique, it is delight for the eyes to be in front of him like we were, ecstatic, and transported to a different dimension by the magic amalgam of sounds coming out of his instrument.

I could be hours writing here about that night. Enough to say there was a moment when Marty started playing the initial notes of “Tornado of Souls” and the crowd went so mad to the point that I had to abandon my first row position fearing they would throw me, my wife and all my photo equipment into the stage at once. The frenzy was uncontrollable–it was a moment of musical madness topped by the demonstration of a band coming from another galaxy. All I can say again is the title of my review: Marty Friedman set Orlando on fire, bringing his deadly mixture of energy and musical mastery to another level. If you ever have the chance to catch him on tour, whether for this album or the next, do not hesitate for a moment. You will be hard pressed to find a better show to enjoy. Bravo!