Jethro Tull is one of my favorite bands from the seventies, and Martin Barre’s sound is very much responsible for that. Playing alongside Ian Anderson for 43 years, Barre’s guitar work helped to outright shape the Tull sound, and earned him a 1988 Grammy Award for his work on “Crest of a Knave” and his guitar work on the classic “Aqualung” garnered him the “25th Best Solo” ever in the U.S. and the “20th Best Solo” ever in the U.K. For quite some time now Martin has been touring with his own band, and his latest solo album “Back to Steel” saw the light of day in September, 2015. During his live performances, Barre does his share of Jethro Tull material, but he reconstruct the classic tunes when playing them, giving them a boost and more of a guitar perspective in the absence of the flute.

Appearing at The Arts Garage in Delray Beach as merely the second show for his current US tour, Martin and his band offered a two hours plus show who left everyone standing and ovation at the end. The Arts Garage, located in downtown Delray Beach, Florida, is an intimate venue which offers you a great seat for jazz, blues and classic rock shows. With largely unassuming exteriors and managed by a non-profit organization, the place is all about bolstering the community’s art offerings through concerts, plays, spoken word events, community round tables and even an arts academy. Despite my wife and myself were seated in the closest center table to the stage the sound was perfectly tuned and leveled, we didn’t actually need our noise-cancelling earplugs. 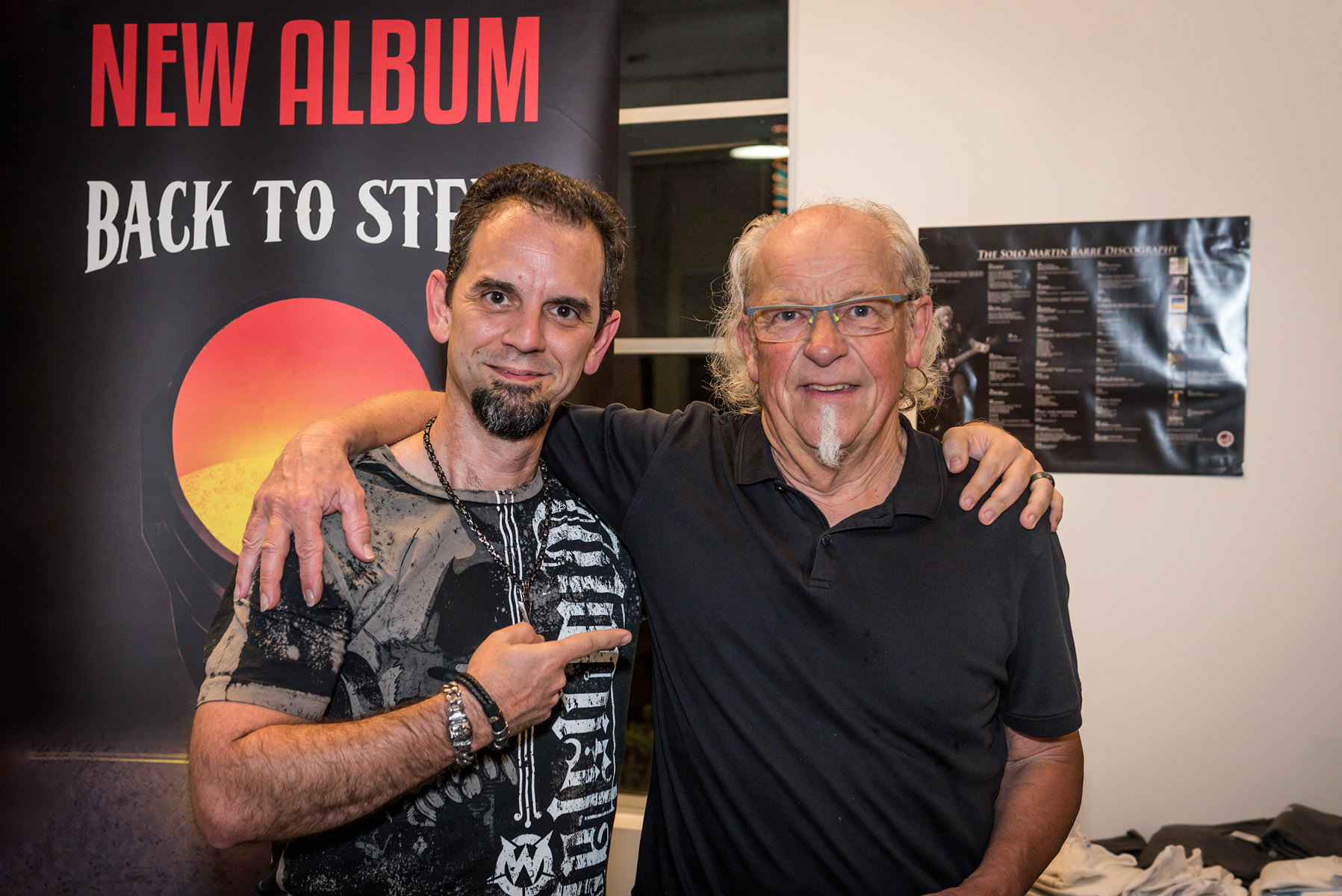 Martin Barre and I before the show

With his sempitern smile painted on his face Martin took the stage around 8:00 PM accompanied by long-time band members Dan Crisp (guitars, vocals) and Alan Thompson (bass, backing vocals) but this time around with a new face behind the drum-kit: legendary Floridian stickman Jonathan Joseph, who has a long an impressive resume and has drummed with Alexander O’Neal, Al Jarreau, Mike Stern, The Yellowjackets, Pat Metheny, Randy Brecker and Jeff Beck just to name a few. At seventy, Barre seems to be having the time of his life while performing live. He moved around the stage like a man half his age, joked profusely and engaged the audience between songs. Last time we saw him live was in November 2015 during Cruise to the Edge, and he hasn’t lost a bit of his charm and energy. But what really stands as incredible until you witness it, is his sometimes described as “tricky” and “complicated” playing style. Martin is one of those peculiar guitarist who belong to a select elite, he has a natural knack for composing melodies instead of simply soloing like many do. His distinctive distinctive guitar work and tone were to the harder side of Jethro Tull for all those years he worked beside Ian Anderson and the rest of the otherwise changing Tull lineup, but he still has the chops and the ability to delight the audience with his elegant phrasing, even when he’s rocking hard. He truly played like a man unleashed, adding fuel to the fire of Ian Anderson‘s already-excellent songs. To his advantage he’s accompanied by excellent musicians on their own right: Dan Crisp is a true wizard on the fret-board and he also does a pretty good job evoking Ian Anderson’s vocal style during the Jethro Tull renditions; and the combination of Alan and Jonathan offered the perfect backbone for the guitar-centric material, which at moments became a guitar fest with Barre and Crisp trading leads, and often engaging in dual-lead harmonics of the Thin Lizzy variety.

The performance was divided in two parts with a 20 minutes intermission, and the second set started with an unexpected surprise: a tight version of Porcupine Tree’s “Blackest eyes”, which sounded as powerful as ever. I really doubt anyone else in the audience recognized the song, and it’ll be interesting to ask Martin why he decided to include it on the set list. For moments the night felt like a badass progressive rock concert, with the band rejiggering all their Jethro Tull selections to one degree or another, striking gold with “Teacher” and a knockout of an excerpt from “Thick as a Brick”; morphing “A New Day Yesterday” into a steely blues barrage with smoking guitar and bass solos; and making “Minstrel in the Gallery,” and “Fat Man” recognizable but with infused new blood. The night closed with the Tull showstopper “Locomotive Breath” as the encore; arguably one of the most indelible encounters in the history of rock ‘n’ roll and a personal favorite of mine.

I truly hope Martin is around for many years to come, but truth is he has played and toured for more than half his own existence. Do yourself a favor and check out his tour dates and prepare for a memorable rock n’ roll night, one of those which will linger in your memories for the years to come.