Upon arriving at the Starplex Pavilion in Dallas, TX this past Thursday night of August 16th you could see fans pulling in by the carloads from every direction finding a place to park, so they could head inside for a night of heavy metal. Some of the fans were dressed up as members of the bands or as a character out of one of Rob Zombies movies. Regardless of whether they were dressed up or not, one thing is for sure they were all there to support some amazing metal artists that had invaded Dallas for the night!

The opening band was Deadly Apples and they came all the way in from Canada! Deadly Apples definitely brought their A game to this show here tonight. They kicked the night off with high energy and had an electric stage presence, putting on a helluva show, more appropriate for a headliner than for an opening band. The band played some great songs, including “Infected” which was a crowd favorite. Front-man Alex Martel’s vocals were strong from beginning to end, as it was his powerful commanding of the stage. The aforementioned song is included on their first full length self-titled which came out in 2010. Another song that the crowd really reacted great to was “Further”,  off of their EP titled Petty. The fans continued yelling and getting hyped up as the band continued to play through the rest of their set, setting the night to a frantic and energetic start. 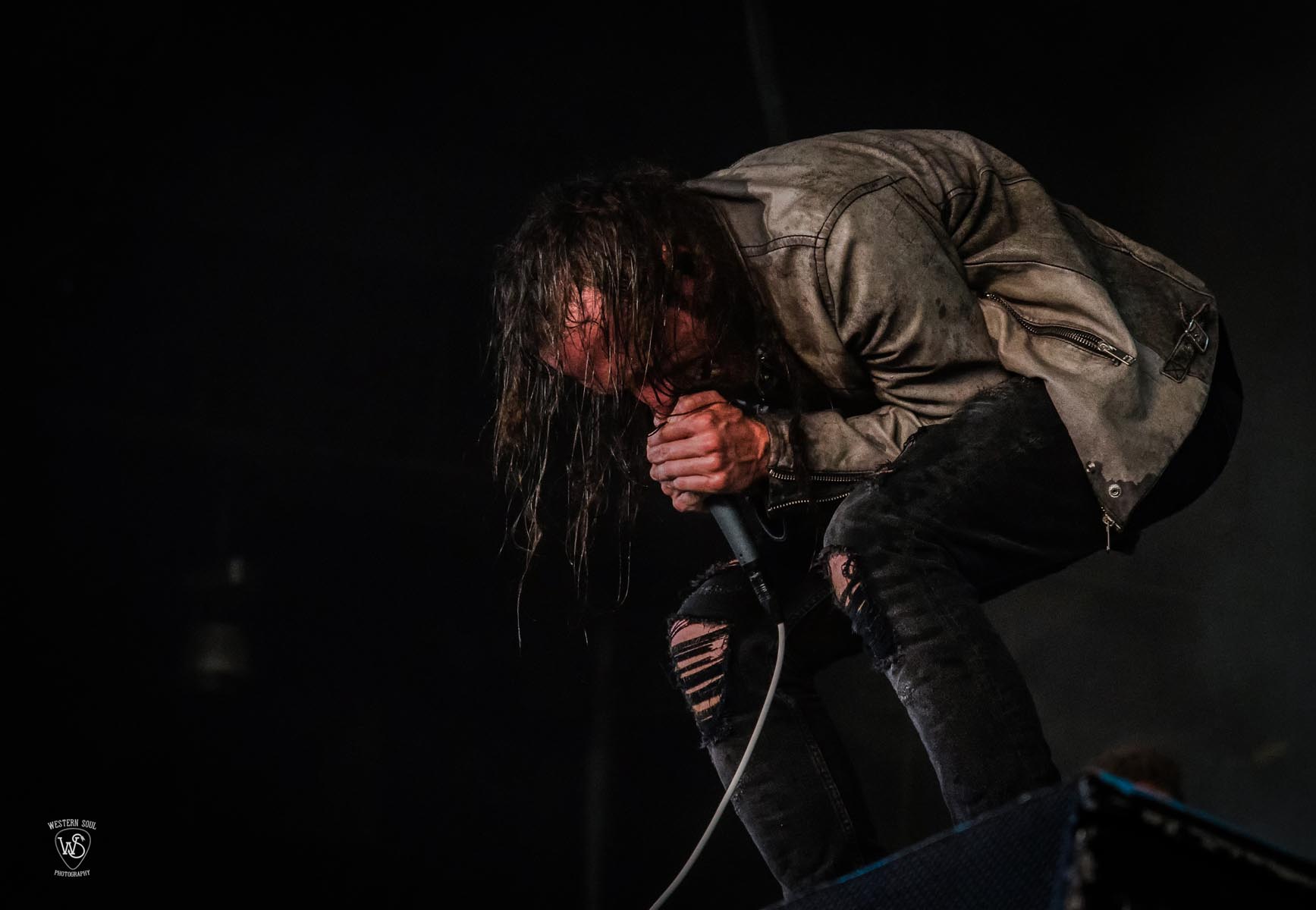 As soon as the house lights dimmed, the fog began to cover the stage and Marilyn Manson’s band started playing their opening song. The crowd erupted yelling with anticipation for the first sight of him walking out. You could barely see anything on the stage with the lights out and fog rolling and then suddenly the microphone stand appeared and started shaking and moving all around. As sudden as it moved, the shaking and moving stopped and every ear could hear Manson’s powerful vocals roar out over every speaker in the place, turning the whole pavilion into a maniacal deafening scream. Despite the customary Texas summer heat Marilyn Manson had quite a few wardrobe changes and several props. One of the wardrobe changes had him wearing a large feather coat that reached the ground and covered his entire body, and he performed the entire song wearing it. 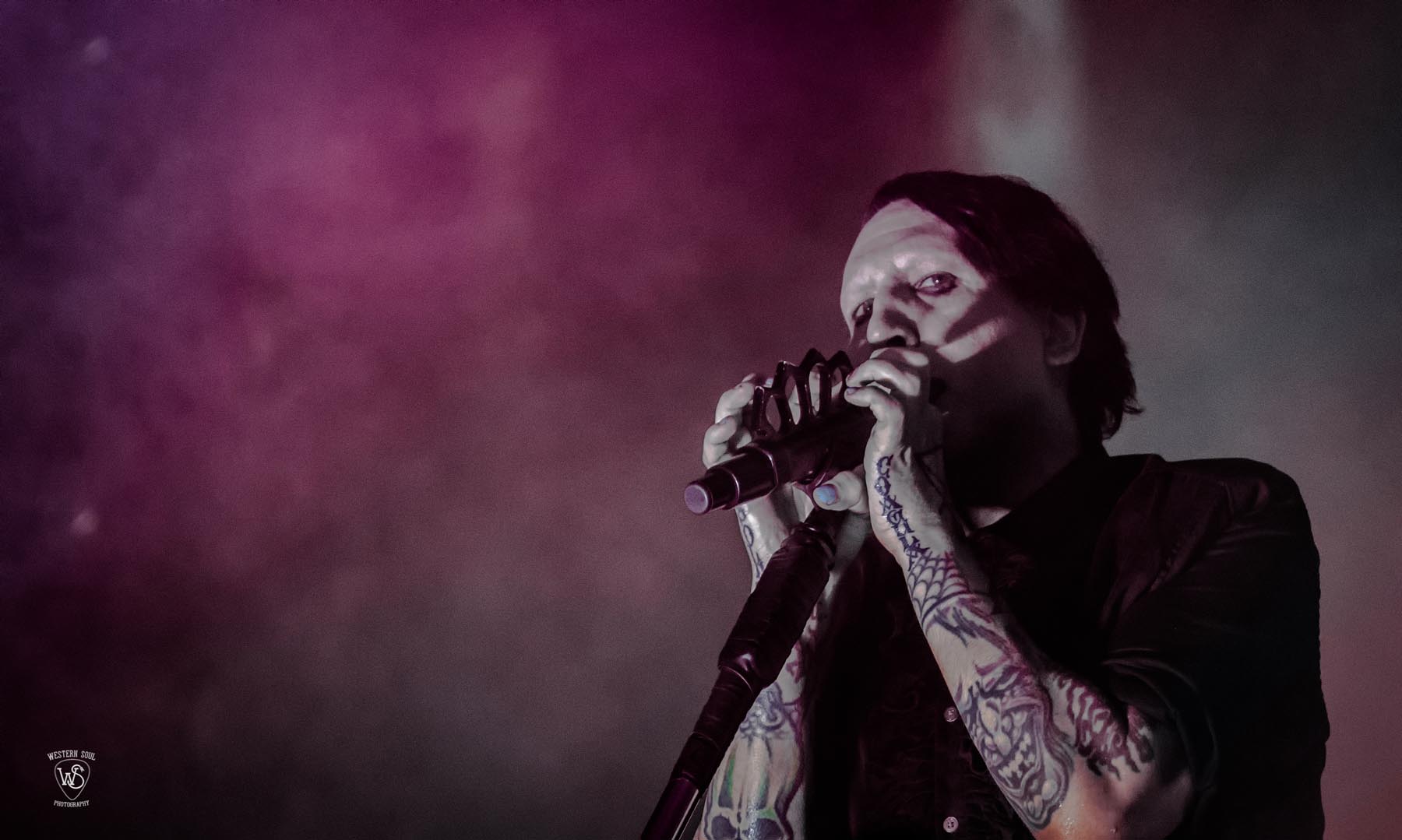 When the last note faded the stage went pitch black and a drop light turned on in Manson’s hand. He asked the audience “Let me see your lights!” and the whole place turned on their phone lights lighting up the whole place. He then stated “Dallas, I love you!” and the infectious opening riffs of “Sweet dreams” commanded the airwaves, seconded by the throats of every fan, singing each verses in some sort of a musical ecstasy. I have to say this was my first ever Manson show even though I have been a fan and listened to him for a long time, and I will tell you this: if you haven’t experienced his performance, you owe that to yourself. When Manson is on stage, you get goosebumps. You simply can’t help it. Listen to me and just don’t miss the chance to see him in concert.

When Manson‘s show was over,  the roadies and crew members started setting everything up for the next band, and the crowd began to clap from their seats, chanting in the seats “Zombie, Zombie”. Zombie has long been one of the more interesting characters in music: he has taken his love of horror, the occult and aliens and somehow made them fun, accessible and mainstream. The curtains were risen slowly, the lights dimmed and he made his entrance like a hurricane, kicking off their set very loud and fast. This was my second Rob Zombie show, the first one happened a bunch of years ago while he was still with White Zombie, and I’ve got to say he has only gotten better with time. The crowd was simply electric. Every person in attendance was pumping their fist and screaming along with each word Zombie spoke. Always a crowd-pleaser and a hell of a front-man, Zombie marched from one side of the stage to the other non-stop, moving his body along with the sounds coming from his band. 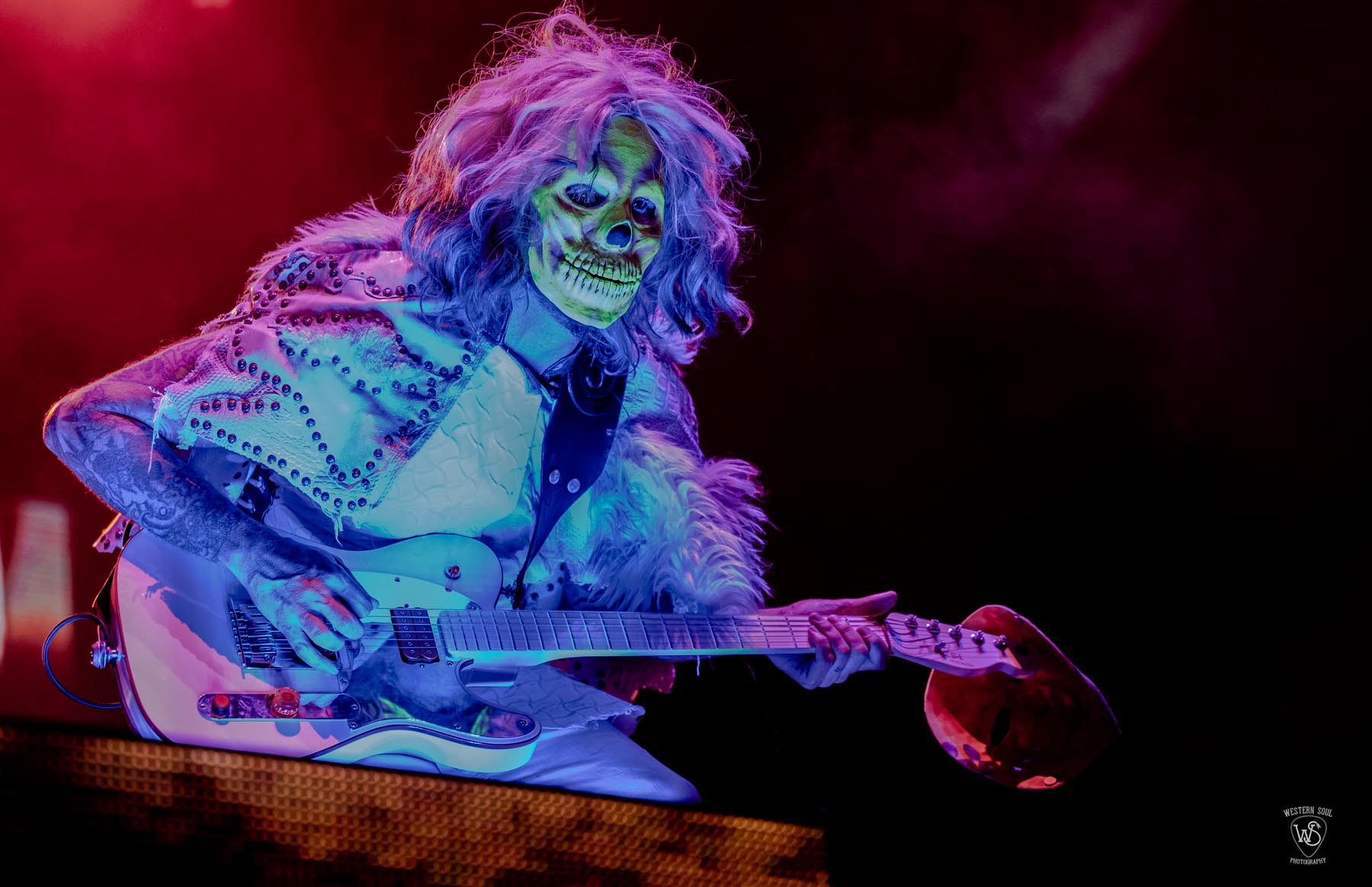 The show was a blitzkrieg of visual images, which included a couple White Zombie tunes “More Human Than Human” and “Thunder Kiss ‘65” the first of three covers including The Beatles‘ “Helter Skelter,” with Manson joining them on stage. Zombie‘s stage show is one of the best in the business, and even after all these years it’s quite the assault on your senses. He may be still the best cowboy to ever come riding through hell. Watching pits break out and then disperse with people high-fiving each other is an amazing experience. I had a very good time and I won’t wait as much as I did to catch Zombie live again.

Lovers / infection / Help / Further / Petty / None of Them / Self-Inflicted Oppression