Exuberance lingered in the pleasant atmosphere of a mild January night outside of Revolution Live in Fort Lauderdale, despite the fan attendance was very sparse. Being Monday night, and also Super Bowl week in Miami (Only 40 miles away) it was somewhat understandable to see a discrete turnout. Nonetheless, the air was buzzing among those awaiting for the doors to open, with echoes of the promises that had been made by the band set to take the stage: what awaited this audience was supposedly “3 hours of blood, sweat, tears, pain, rage, and life-affirming metal.” It seemed that there was no doubt in anyone’s minds that this is what would be delivered in full by none other than the legendary personalities of Machine Head over the coming hours of night.

Beginning as a group embodying the early flavors of groove metal and heavy metal, Machine Head saw near instantaneous success and began touring in Europe as support for Slayer following their 1994 debut album “Burn My Eyes.”  But the nature of music is evolutionary, as is the nature of the musicians that fill out the ranks of bands of all calibers. In the nine full-length studio albums that they have released since 1994, these veterans of the American metal scene have shifted their sound in favor of thrash metal, also having moved through a period of nu-metal textures. Additionally, Machine Head recently underwent a significant lineup change, replacing previous longtime members with guitarist Vogg Kiełtyka (Decapitated) and drummer Matt Alston.

Beginning in late 2019, Machine Head embarked on a tour of epic proportions in Europe, a tour succeeded by a litany of winter shows scattered throughout North America before planning a return trip to Europe in May. Forgoing a bill overflowing with star-studded supporting acts, Machine Head promised a full night of nothing but a retelling of their own epic story in all of its high-octane glory. This promise unfolds in the form of two full sets, spanning almost three hours of music, split between the band’s present and the past. The second set truly calls back to Machine Head’s roots, playing debut album “Burn My Eyes” in its entirety, bringing back early members Logan Mader (guitar) and Chris Kontos (drums) for the performance. 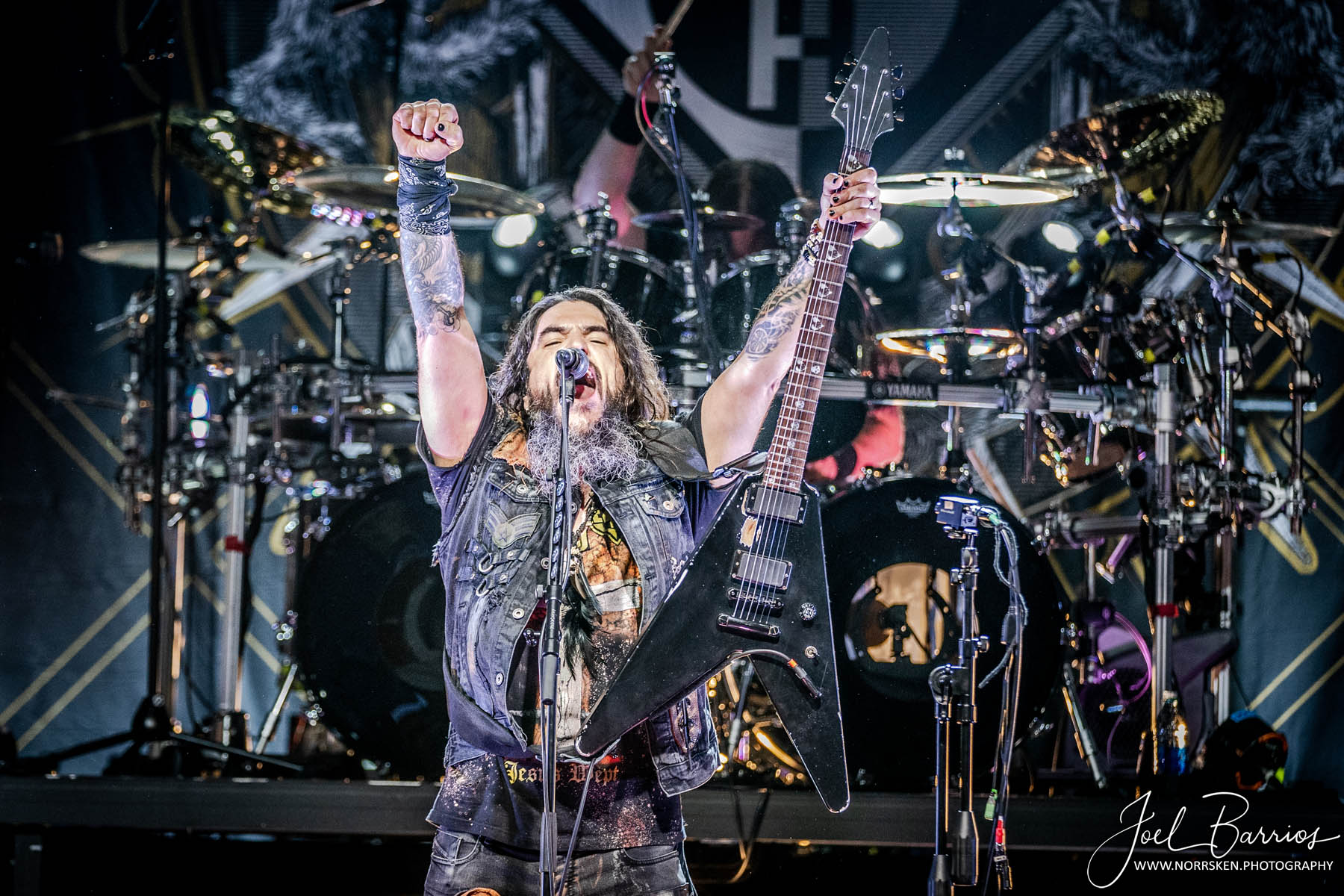 By the time that the lights finally dimmed, it would have been difficult to believe that there was no opening act to warm up the crowd. But it was also clear that Machine Head needed no introduction, with bodies pressed shoulder to shoulder in the areas close to the barricade, eyes staring up at the stage. Despite coming in cold on a Monday night, as soon as the lights went down, roars filled the venue at a deafening cacophony. Moments later, founder, vocalist, and guitarist Robb Flynn took his place behind the microphone stand, a definite sense of belonging in his stance. They struck off the night with a deep dive, pulling directly from their 2003 album “Through the Ashes of Empire” with opening track “Imperium.”

Flynn maintained the perfect picture of a balance between well-practiced methodology and genuine excitement, eagerly stirring up the crowd as he leaned into the mic and ran a gambit of singing, screaming, and shrieking, sprinkled with his usual F bombs.. After so many years on the tour circuit, Flynn has developed a persona that is absolutely magnetic on stage, drawing eyes to him with near effortless grace through his vocal routine. Despite being constrained to the front of the stage, instrument in hand as he sang, somehow he managed to also mode to the sides when landing a guitar solo or just to fuck around with Vogg or long-time bassist Jared MacEachern. It seemed he could have hardly been a greater presence even if he had been prowling the stage from side-to-side, demonstrating his larger-than-life demeanor as he dug in his heels for the ever-popular song “Locust.” Simple lights accented his aggression, bathing the musicians in a sea of deep blues and blinding whites, casting them as mythical beings amplifying raw power and strength at unbelievable volumes. Flynn also addressed the multitude in many occasions, once stating: “We won’t give a fuck if this place is not sold out, we have come to share the music as a common bond with all the presents”. 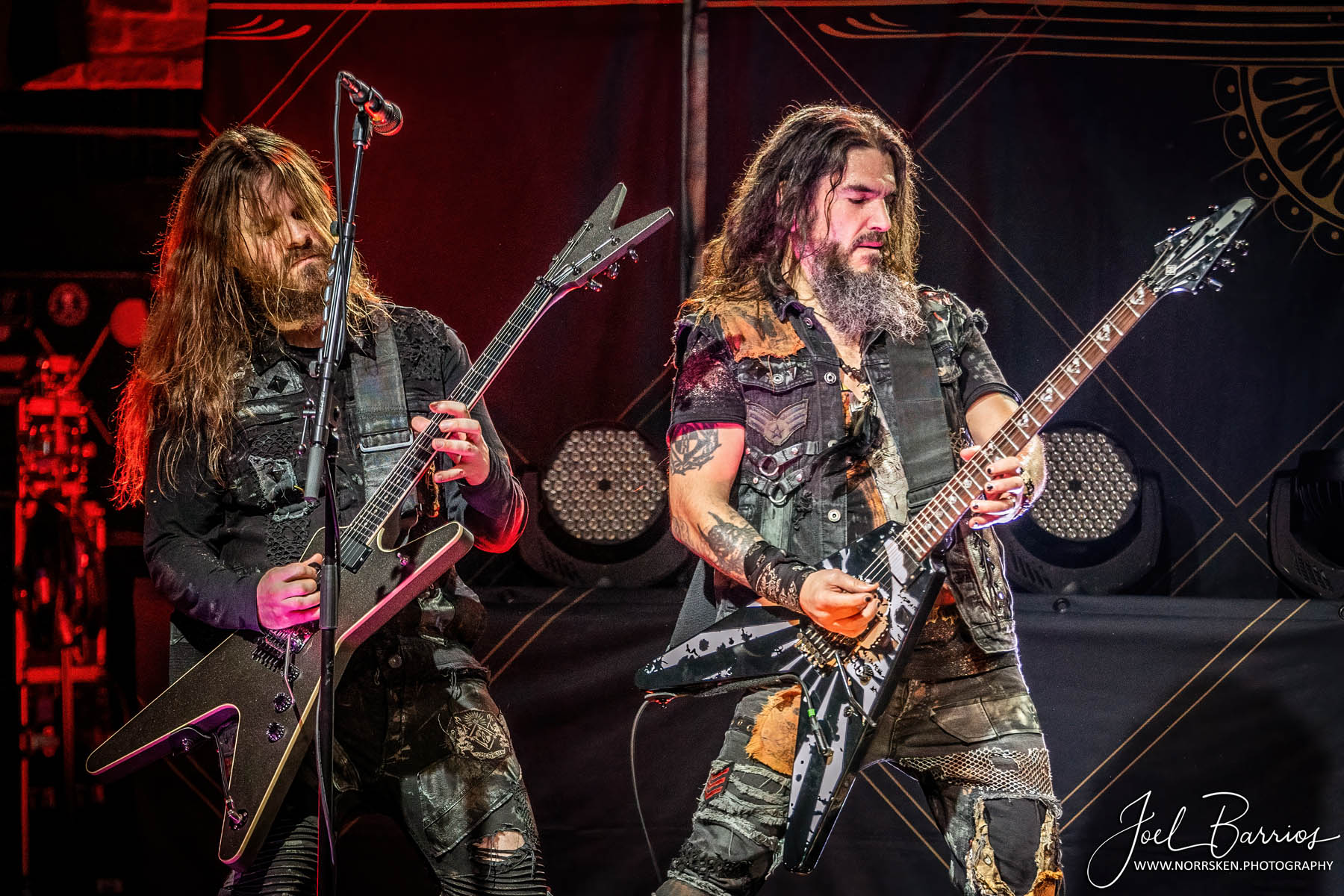 Though Flynn has a well-established presence through his decades of experience, this first set was more than proof that the two newest members were rightful in their place on stage. While each brought their own relative experience with them, this was an opportunity to prove that they could adopt the expectations that came with the well-respected banner of Machine Head. Alston kept with the punishing pace on drums, treating his place behind the kit as a throne, never faltering even under the demanding pressure of “From This Day.” Kiełtyka proved himself to be equally charismatic, almost charming as he worked his way through a medley of some of Machine Head’s most popular material as though he had been playing with the other musicians on stage for half a lifetime. Their chemistry was undeniable, making for a complimentary choreography as the first half of the set progressed. A truly magnificent moment in the first set happened when they threw a rendition of Iron Maiden‘s “Hallowed Be Thy Name”, with the intensity in the mosh-pit increasing twofold.

Once the second half of the night rolled around, the crowd was showing some signs of exhaustion, but were far from surrender. After the first set closed with “Halo,” the second set began 10 minutes later with a recorded track of “Real Eyes, Realize, Real Lies,” making for the perfect backdrop as Mader and Kontos were reintroduced. They seemed to spring on to the stage with a youthful enthusiasm, as though they were eager to come home. It was a homecoming well-received, with the very roots of the band coming back to the blinding lights as Flynn led the opening of “Davidian” with fresh excitement. Were there no witnesses from the first half of the evening, it would have been difficult to believe that he had just commanded an entire theater in the throes of heavy metal for the better part of an hour and a half. 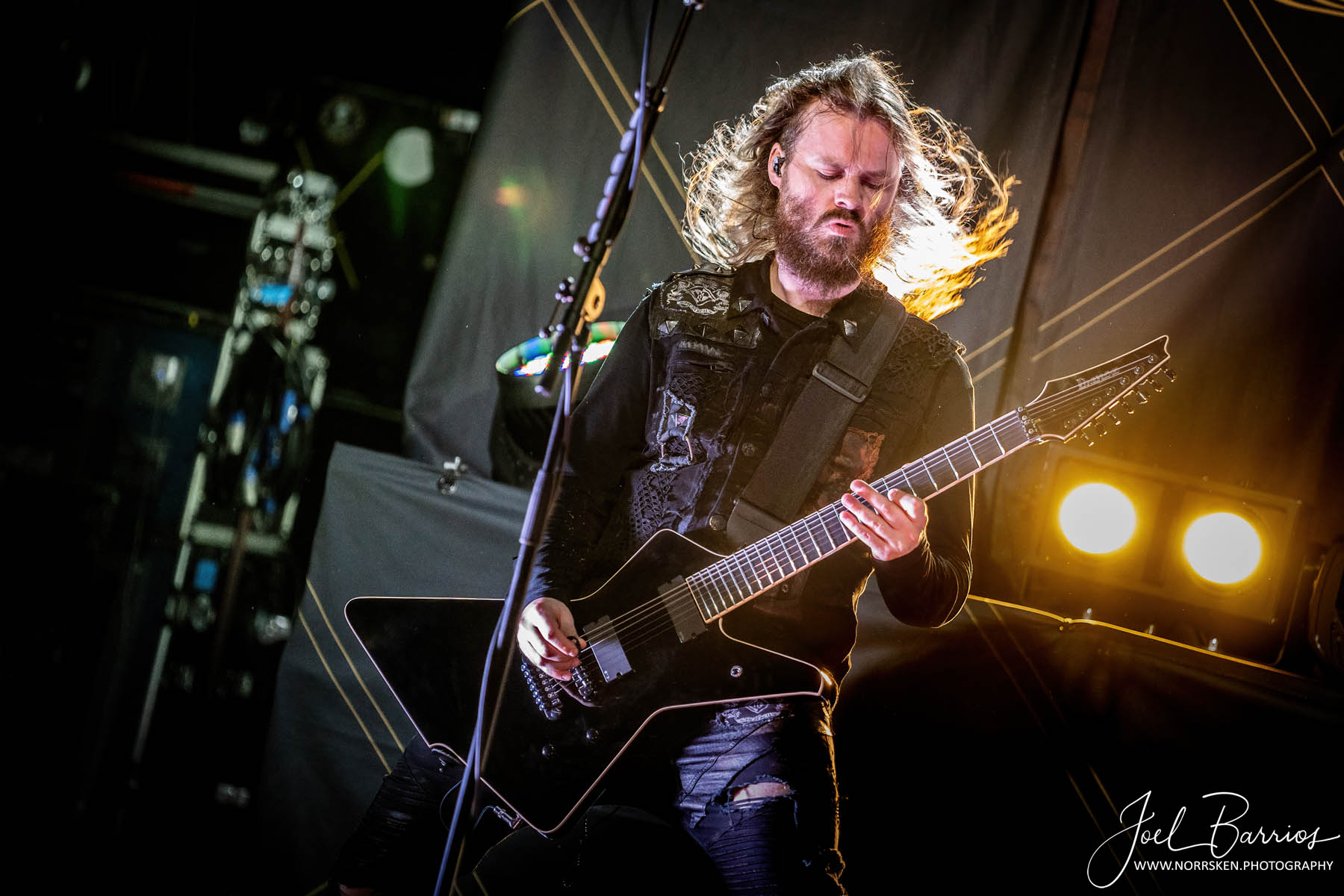 The second set was visually brighter, forgoing the sharp and icy contrast of blue and white for vibrant hues of orange and yellow, lighting the musicians on fire. “The Rage to Overcome” was bathed in an impression of flames as the tones of “Burn My Eyes” told a story of not just Machine Head’s history, but the emotional history of the scene at the time. Mader was entirely engaged in his performance, the notes coming from his fingers as though the music were part of his very blood. Where some bands seem to shun their earlier years, both the fans in attendance and the original musicians seemed to have a genuine and heartfelt connection to this early material, one that they celebrate with fists raised in the airs and bodies crashing into one another in a ferocious exaltation.

With just two songs left in the night, Machine Head revealed that an already special set had yet another surprise in store: an eclectic medley of metal songs from bands that had been born and rose to fame alongside them, as well as a number of their predecessors. The medley included pieces from Metallica, Alice In Chains, Rage Against the Machine and Slayer. Though their recitation of “Burn My Eyes” had proceeded with serious dedication for their craft, the pure joy and exuberance in this medley was a demonstration of passion, a love for music that spanned far beyond the bounds of their own creation.

Even after three hours of music, exhaustive in scale and scope, the audience was still crying out for more, begging the musicians to stay just a touch longer. It was a night that had lived up to the promises Flynn had made before the tour even began, with the pain and rage that brought hordes flocking to Machine Head in the 1990s turning into a night full of smiles and joyous screams. With both sets expertly curated and performed, Flynn showed himself to be a master of personality and of musicianship, and an irreplaceable performer still going strong after almost three decades. Where some artists struggle to balance the demanding roles of vocals and instrumental performance, he seemed to thrive, drinking in the splendor of the lights and cheers as though it were the very air he breathed. Most of all, it showed that Machine Head still strikes a deep chord with fans, one that spans from their long-past debut to the bright enthusiasm of the band’s newest members. Here’s to many more years of musical catharsis.

Diary of a Madman (Ozzy Osbourne song played over PA) / Imperium / Take My Scars / Now We Die / Struck a Nerve / Locust / I Am Hell (Sonata in C#) / Aesthetics of Hate / Darkness Within / Catharsis / From This Day / Ten Ton Hammer / Is There Anybody Out There? / Hallowed Be Thy Name (Iron Maiden cover) / Halo