At 11:30 pm, George Lynch and the mob entered the sweat-soaked stage of the Rockpile in Toronto Canada. I had interviewed Lynch hours before and I was eager to see the band playing, despite I must admit I’m not the biggest connoisseur of  George’s output, but with a discography as big as his, I guess that’s forgivable. I did spend many afternoons listening to Dokken’s Back for the Attack as a teenager though, and when the opportunity to see him live presented itself at the last minute, I could not pass it up. The band kicked things off with the bluesy and mystical “She’s Evil But She’s Mine”, and right off the bat it was noticeable how different George’s playing is from his peers of the 80’s. He may shred like there’s no tomorrow, but his style is not overbearing, and he values the thousand notes he plays as much as the space between them.

Coming up next was the AOR-influenced “River of Love”, with open chords and a great performance by singer Andrew Freeman. Oozing charisma, he asked the crowd to join the chorus of “When Heaven Comes Down”, and join they did! George’s playing, much more intuitive than technical, hypnotized members of the audience, roadies and venue staff in equal measures. The look of disbelief in everyone’s faces at each solo he did tonight was a memory to cherish forever! 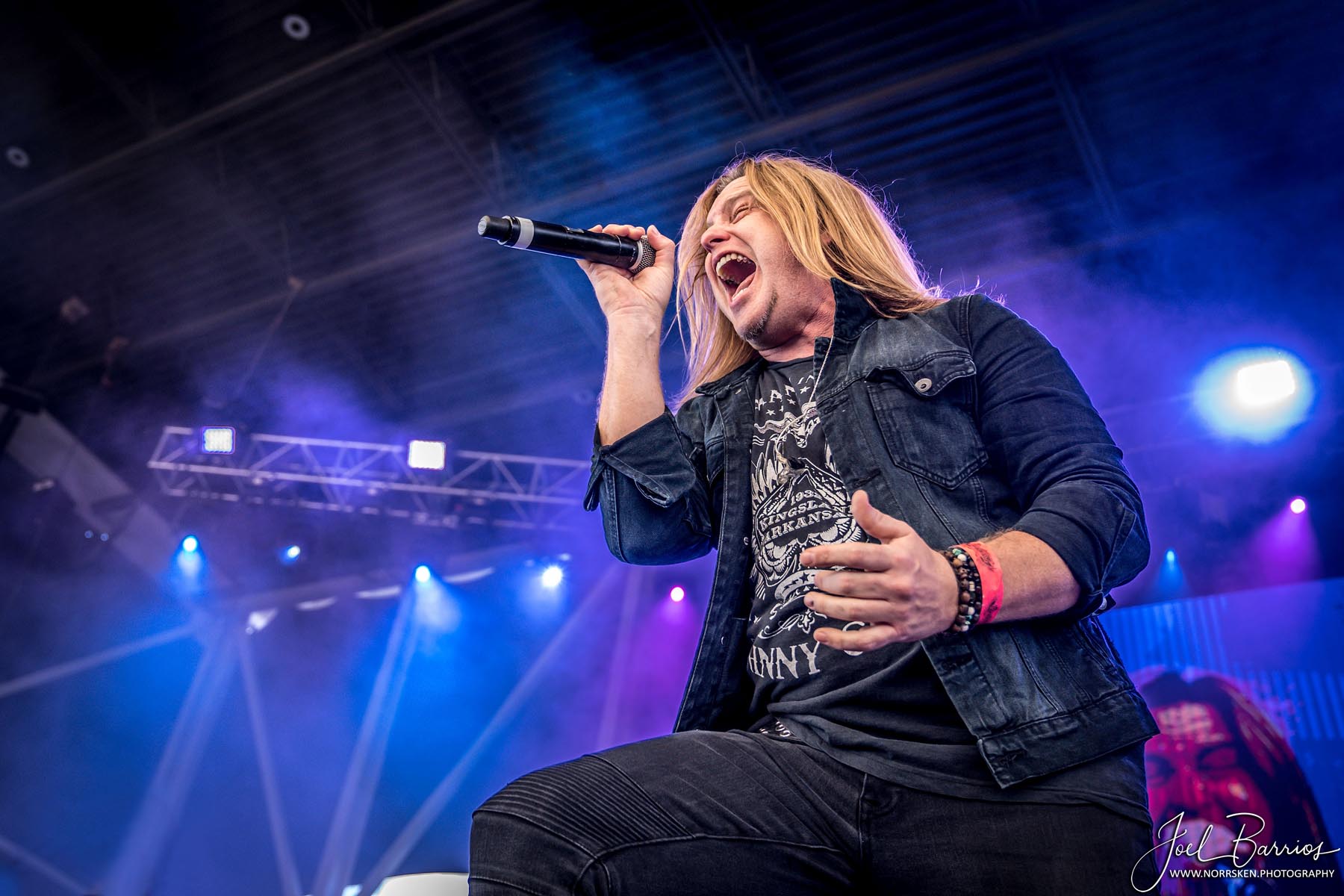 Andrew Freeman singing his heart out

With a captive audience like that, one would think nothing else would be needed to work up the crowd, but bassist Sean McNabb took things up a notch when he mentioned the Raptors’ winning of the NBA this year. Of course that got an amazing response, and a hot blooded mob joined in unison the chorus of “Sweet Sister Mercy”, and headbanged to the sleazy verses of this song, a highlight of the band’s first album.

Like a wise shaman, whose experience and wit overcome any technical shortcomings, George hit many beautiful notes throughout the evening, not least of all on another crowd pleaser, Dokken’s hit “It’s Not Love”, which the band expanded into a lengthy jam. With his gray hair on a samurai tie and employing non-traditional techniques, the man pranced the stage and was all smiles, distributing fist bumps and handshakes along the set.  One more difference to be mentioned between him and other contemporary shredders out there is that he used only one guitar throughout the show, a beautifully worn out signature ESP GL-56.

In a very funny and truly sincere moment, the band traded jokes and discussed what to do on the next song, “Testify”, in front of the audience. Kicking it off with an insanely heavy riff, this number developed into possibly the greatest improvisational spot of the evening, with Sean’s meaty bass lines and Jimmy D’anda’s thunderous fills providing the support for George’s explorations. His very percussive playing style was also accompanied by a rare moment where he did some singing as well. He later explained that watching a documentary on Aretha Franklin drew him to tears and inspired him to take on vocals on certain songs.

Follower “Believers of the Day” continued the trend of taking unexpected turns in different parts of the song, while the mid-tempo of “The Hunter” garnered once again a great participation of the crowd, who gladly helped Andy during the chorus. The follow up was the mind-bending, career-defining “Mr. Scary”, one of the most influential and jaw dropping guitar-driven tracks in all history of hard rock and metal. Admittedly, George never plays the same song twice, so it’s no surprise that a storm of phones came out during that song, with almost everyone wanting to capture such a unique and fleeting moment in time. “Into the Fire” closed the main set in epic fashion, with a Van Halen-esque extended ending. “We need to go. Andy is too old, and we have too much cocaine to do and too many hookers to fuck”, a humorous George uttered before leaving the stage. 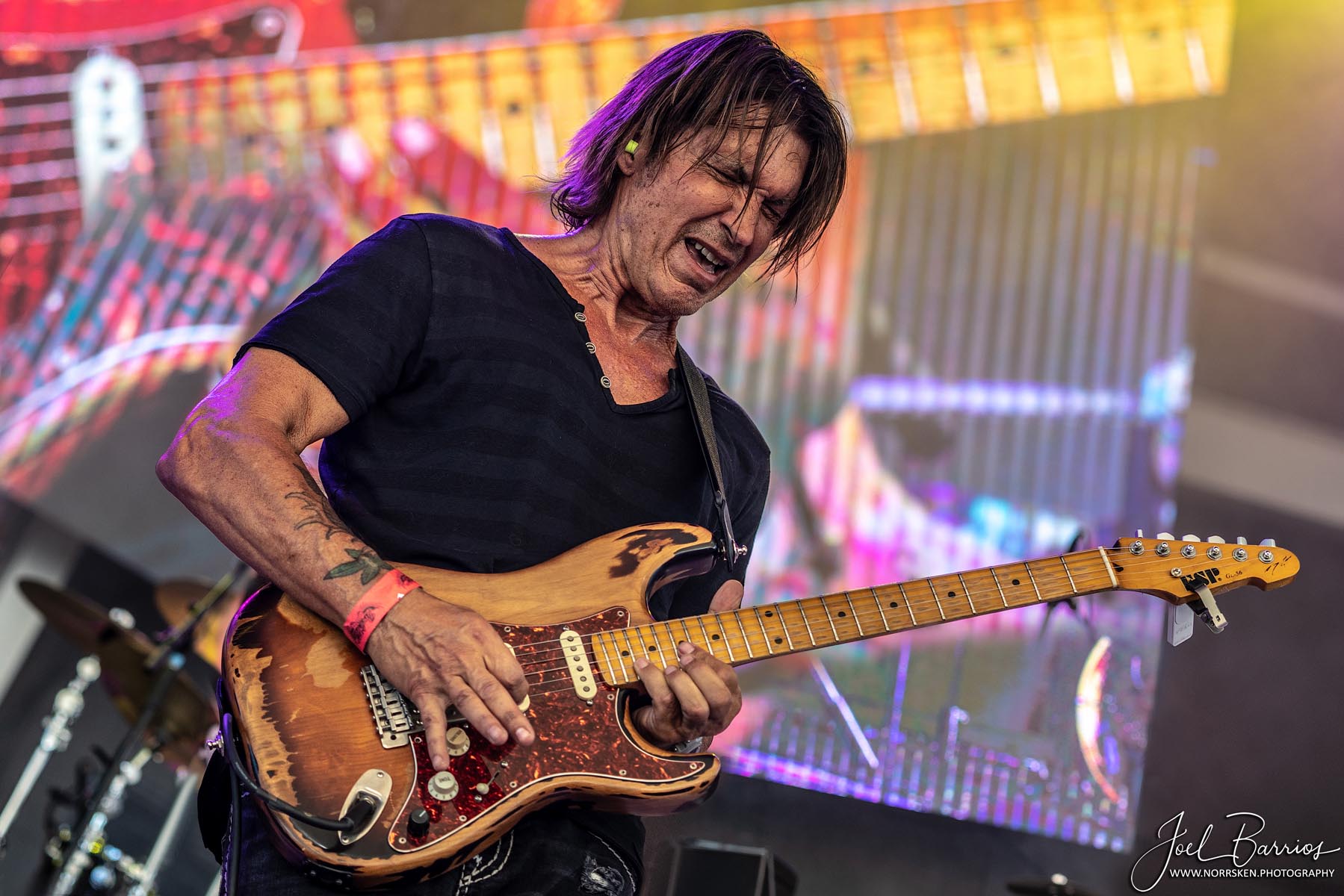 The band came on strong at the encore, with the quasi-thrash Dokken number “Tooth and Nail”. Recorded at a time when Don Dokken and George were already at each other’s throats, its lyrics almost by accident allude to the band’s status at the time: “Desperate living, driving me mad/Writings on the wall/Crushed all our hopes and the dreams we once had/Just to watch them fall”. The choice for the two set closers could not have been more appropriate – the title track and the last song of the band’s first album. The ultimate party anthem of “Wicked Sensation” and the vertiginous “Street Fighting Man” brought out the wild side of an already alcohol-fueled crowd, eternally hungry for six-string wizardry. Even towards the end of the set, somehow this band’s jams seemed to mesmerize without overextending their welcome, quenching the thirst of the packed venue.

As George himself said during the interview, the constant lineup changes somewhat hurt their popularity. Tonight’s performance, for an audience that know well what to expect of their show, was a clear evidence that Lynch Mob deserved a better place in the hard rock and metal rankings. At this point in time though, this band has nothing else to prove, and yet they play every night with the fire and fierceness of a bunch of teenagers on their first ever battle of the bands. This tour has very limited dates, and if it comes anywhere near you, do not miss the chance of catching one of the last torchbearers of shred guitar still around.