Ever since SLAYER announced their farewell tour back in January of this year, the metalheads community have been salivating with the opportunity of attending one of the shows of the metal titans last presentations on stage. After making some of the most brutal, breathtakingly aggressive, all-hell’s-a-breaking-loose music ever created, being one of the four bands that defined an entire musical genre and being the band that other heavy acts are measured against and aspire to, the age of SLAYER, one of the greatest thrash/metal/punk bands of this or any age, is coming to an end, and that end is happening now.

Obviously, such tremendous final celebration couldn’t be complete if SLAYER hasn’t ensembled a deluxe lineup of bands to accompany them during their final live trek, and their choices couldn’t have been more stellar: LAMB OF GOD, ANTHRAX, BEHEMOTH and TESTAMENT completed a quintet of the most anticipated and I’d dare to say unmissable metal tour of the last few years. This line-up descended upon the Austin360 Amphitheater last June 20th, the final date of the first trek of the tour, and we were there to document the unforgettable evening.

TESTAMENT, a band out of the San Francisco Bay Area Thrash scene of the 1980’s, inaugurated the afternoon, which a suprisingly short set of only seven songs.  I have always said the same thing about TESTAMENT, all band members are extremely talented and way above average, in special the guitar virtuoso Alex Skolnick and the atomic clock drumming machine Gene Hoglan. With a solid line-up rounded up by the amazing Steve DiGiorgio on the four strings, they delivered a flawless performance for the delight of all metalheads packing the venue since the early hours of the afternoon. Blasting a couple of their newest creations from one of the best metal album of 2016 – the superb Brotherhood Of The Snake – the band paired kick-ass tunes like “Brotherhood of the Snake”, and “The Pale King” with old school songs classics, and one of  the newer staples: the brutally sensational “Rise Up”. TESTAMENT delivered an ear-tingling set, plenty of energy, relentless guitar and bass playing, with Chuck Billy‘s driving vocals paired with mean air guitars on his microphone handle. 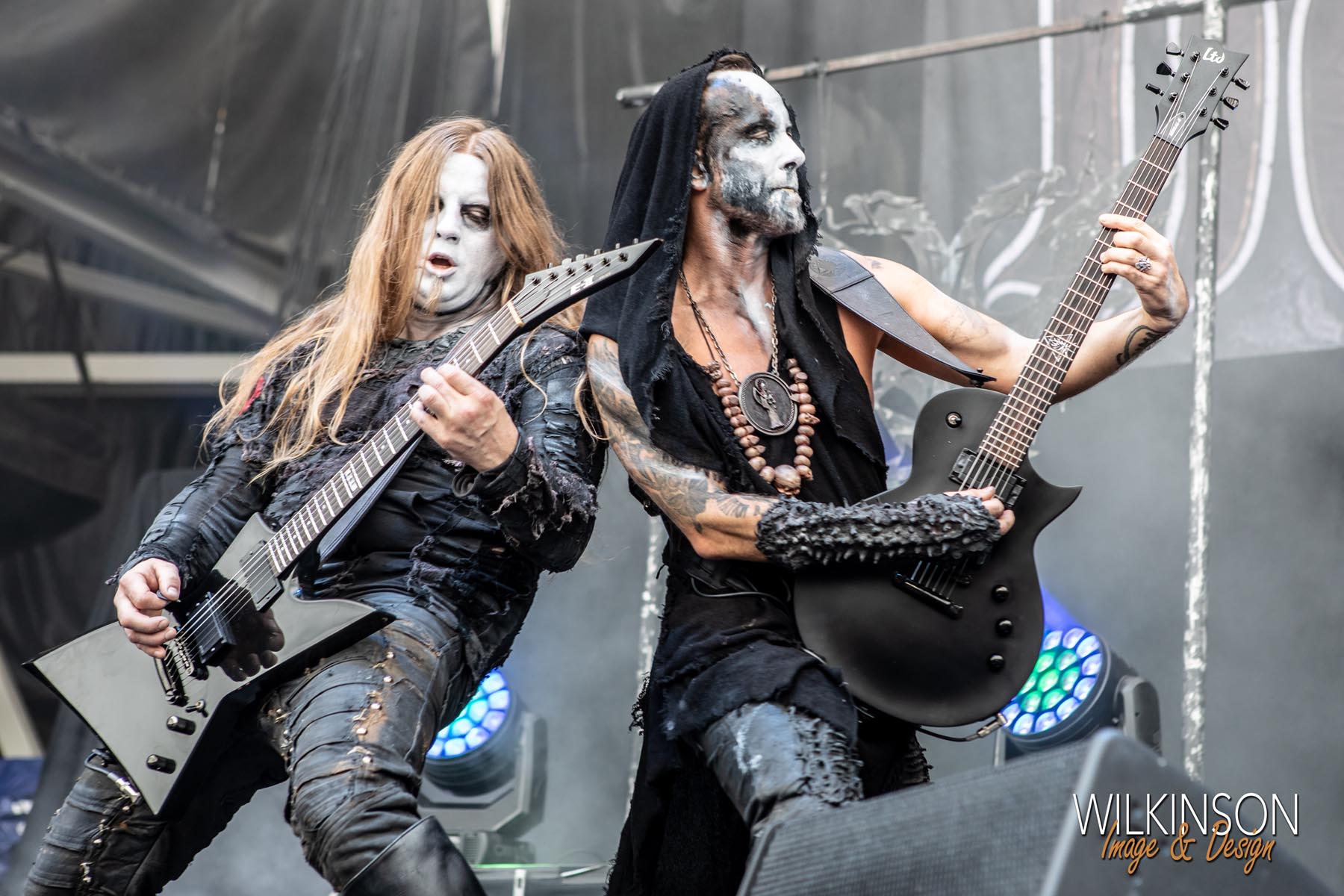 The best and most controversial metal band in the history of Poland came after the customary 20 minutes of stage changeover. There are still a significant number of metal fans that aren’t familiar with BEHEMOTH, and that somehow impacted a bit the crowd’s reaction at the beginning. Walking on stage clad in corpse paint and suitable black metal attire, the band tore into the audience with an avalanche of blast beats, demonic guttural vocals and harsh riffs. One of the most inventive, entertaining, soul-shattering contemporary metal acts they also played a short half-an-hour set, plenty of visual theatrics, mixing up the set list to include more of their better-known songs, like “Ov Fire and the Void”, “Ora Pro Nobis Lucifer” from their hailed The Satanist album, tune for which Gene Hoglan joined them behind the drum-kit. For the masterful “Chant for Eschaton 2000,” – which they closed their set with– they donned blacked out human-goat hybrid masks, really upping the ante of the afternoon’s most extreme metal side, adorned with Latin invocations to Lucifer. 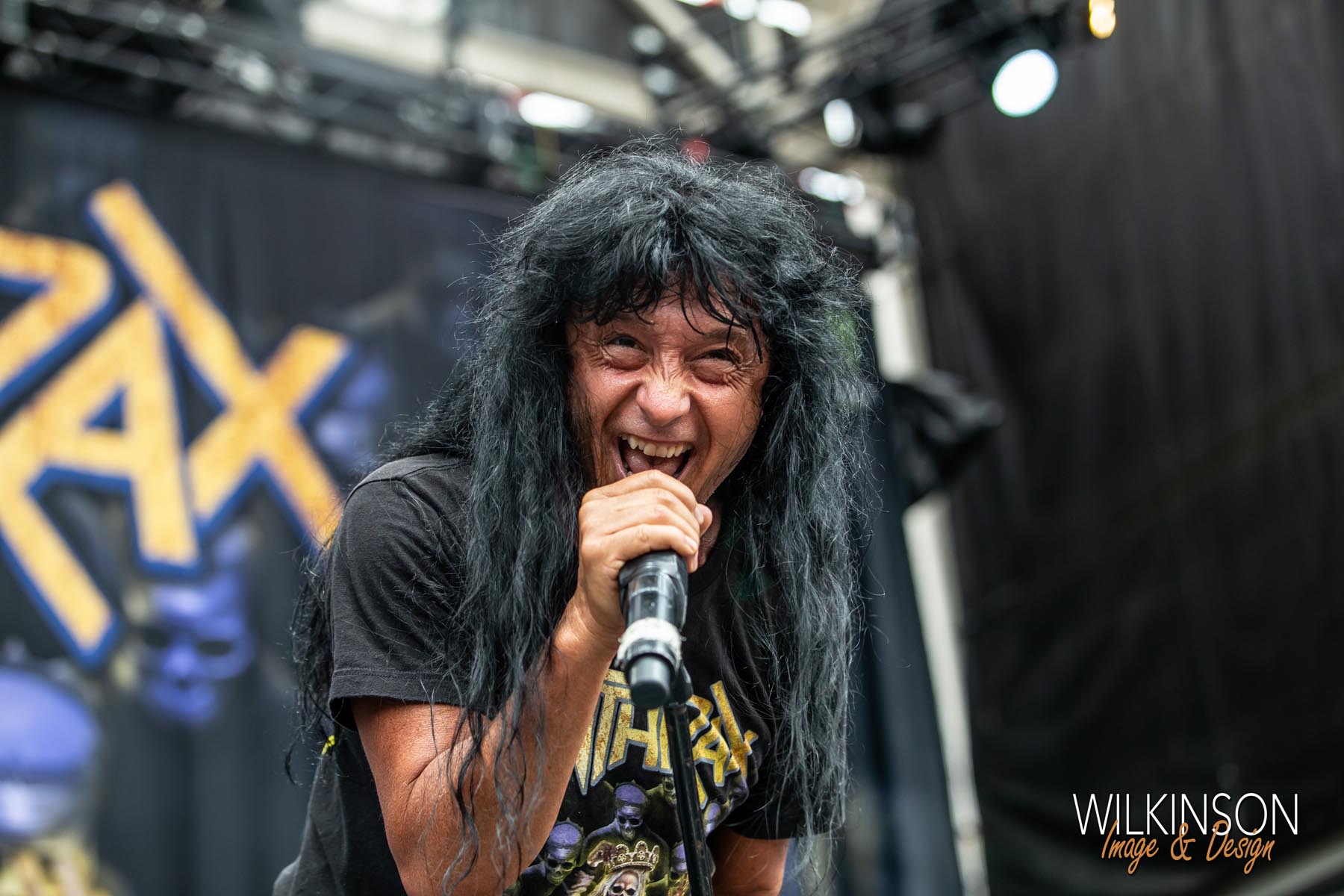 After the black metal assault tolerated by the crowd, the crossover thrash metal giants ANTHRAX came on stage, and the mosh pits gained life. ANTHRAX puts out more energy on stage than bands that are half of their age and the setlist was a murderer’s row of legendary classics, whipped through an initial back-to-back triple threat of “Caught in a Mosh,”“Got the Time” and “Madhouse.”“Be All End All” gave a nod to the State of Euphoria album, which is celebrating its 30th birthday this year, and “Evil Twin” spiced their set with the only track from their most recent record. Frank Bello was non-stop, moving in some sort of an adrenaline burst and headbanging at-all-times, a big contrast with Johnny Donais, a slick and fluent guitarist who makes it look so easy while at the same time staying mostly quiet. Joey Belladonna interacted with the fans on all sides of the amphitheater, channeling the band’s in your face energy and craziness and frankly keeping everyone involved and wanting more. They concluded the set with “Antisocial” and their classic mosh anthem “Indians,” with Belladonna screaming out “War dance!” and the audience following his lead and turning into a human living wave, while the singer stormed the stage, dancing and jumping like a possessed. 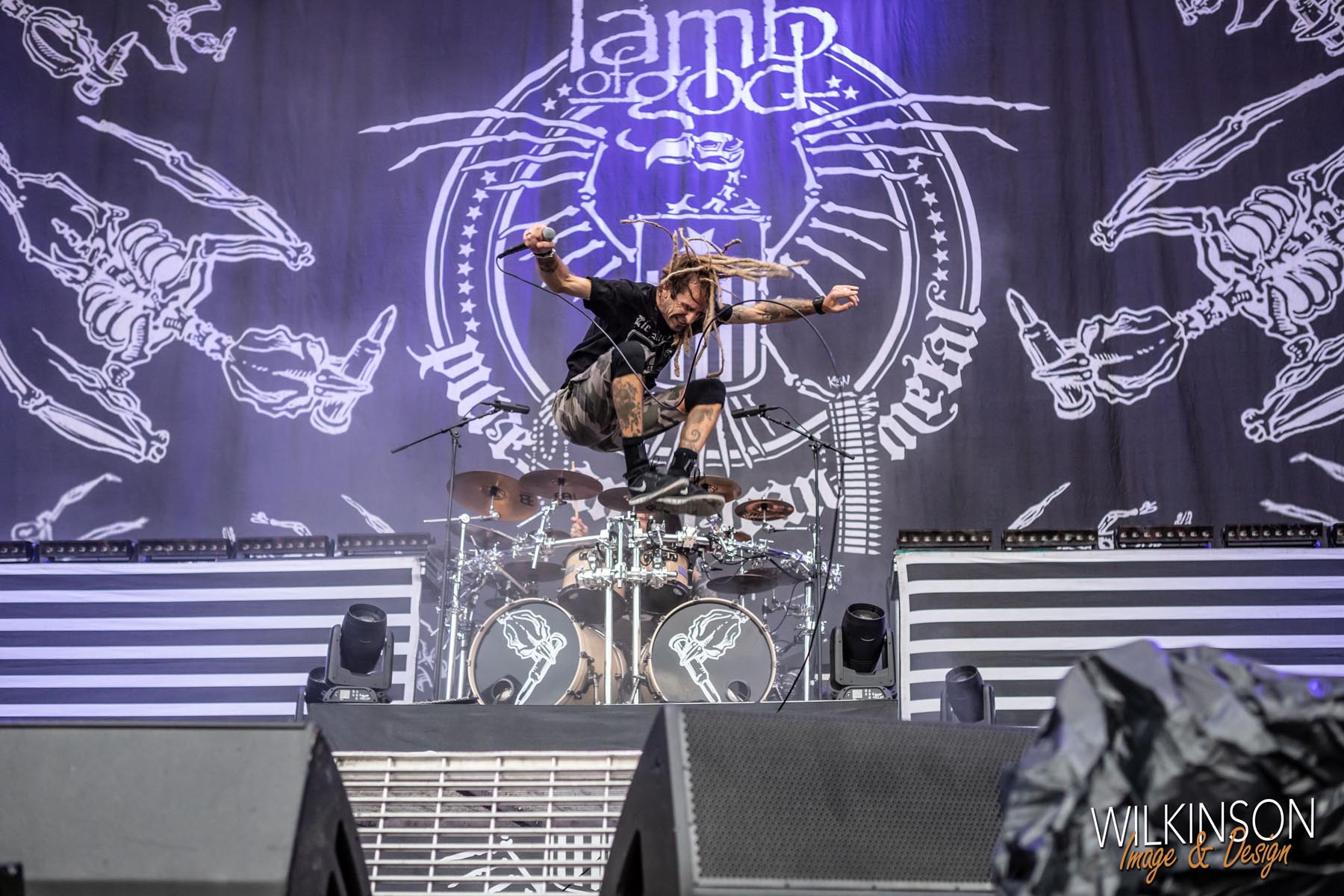 Lamb of God’s Randy Blythe flying over the stage

Up to this point the night had been a fantastic display of unadulterated metal, but LAMB OF GOD took things to a different level. Becoming titans of metal over their 23 years of existence, these guys from Richmond, Virginia are really a sight to behold, a true prove of what American metal is all about. Walking on stage while the spoken word intro to “Omerta” played over the PA, Randy Blythe and his cohorts pressed the heaviness pedal to the very end and threw every single living soul in attendance into a full-blown lunatic state. Their technical brand of metal, plenty of chugging riffs and squeals sent electricity airwaves over the fans, provoking a steady wave of crowd surfers surfacing from a crazily frenzied pit of fans, who let the music soak them with its primal energy. Lead singer Randy Blythe moved around the stage like an unhinged beast, with his wild dreadlocks swinging with every headbang, pouncing like a madman, and exuding such levels of passion and intensity that was exhilarating to watch. The crowd drunk up the vigor emitted from the band as they ripped through fan favorites “Ruin,” “Walk with Me in Hell,” “512,” and “Engage the Fear Machine,” capitalizing on their own combination of powerful and brash drumming, rock-hard bass lines, crushing guitars and Blythe’s outrageous and evil-infused vocals.

Finishing off their set with my favorite tune, the neck breaker “Redneck,” they encouraged the entire amphitheater to turn into one giant circle pit, sending off the crowd with a thunderous and somewhat primal execution which served as the ultimate full throttle expression of aggressiveness and power. With all due respect to the mighty SLAYER, Blythe and company set the bar extremely high and let everyone exhausted. It’s been while since I witnessed such strength in a live presentation, and their show was worth the price of admission alone.

A fabulous and relentless exhibition of what heavy metal means, do not waste your opportunity to catch these bands when they start their second North American tour leg next  July 26th

Caught in a Mosh / Got the Time (Joe Jackson cover) / Madhouse / Be All, End All / Evil Twin / Antisocial (Trust cover) / Indians