Theatricality is the greatest ally of any band that opts for a simplified and streamlined approach to delivering the auditory goods, and if the past 27 years of Korn’s career as a standard-bearer of groovy alternative metal has taught the masses anything, it is that said band is no stranger to dressing up their video work with all the latest bells and whistles. The added societal stress of the pandemic lockdowns that has crippled the entertainment industry for the past year brings a greater sense of urgency in getting a unique experience, given that the only medium for broadcasting an otherwise live concert event is the virtual one. Per the band’s own words regarding the event itself, their hope was to present a show that came off as though tens of thousands of live attendees were in congress, and the event that transpired on April 24th dubbed Monumental, atop a parking structure on a stadium-like set in Los Angeles, proved to be just that.

The event kicked off with a decidedly creepy vibe, featuring shots of the Los Angeles skyline, the band’s unoccupied gear on stage, all to the horrific carnival vibes of the intro track off the band’s 2007 “Untitled” album. As if the atmosphere couldn’t be any darker and brooding, the band themselves would proceed to enter the stage towards the intro’s conclusion in a black monochromatic ensemble getup normally reserved for those auditioning for Blade 2 (apologies to T.J. Miller and the writers of Deadpool for the stolen joke). But all kidding aside, the extravaganza of pummeling, down-tuned grooves, eccentric vocal displays and oddball ambient guitar sounds that ensued would prove to be a veritable feast for the ears, and the accompanying light show and gesticulations of the band would effectively mimic the energy and atmosphere of a sold out arena, not to mention justify the black leather-bound, Underworld LARPing outfit sported by front man Jonathan Davis. 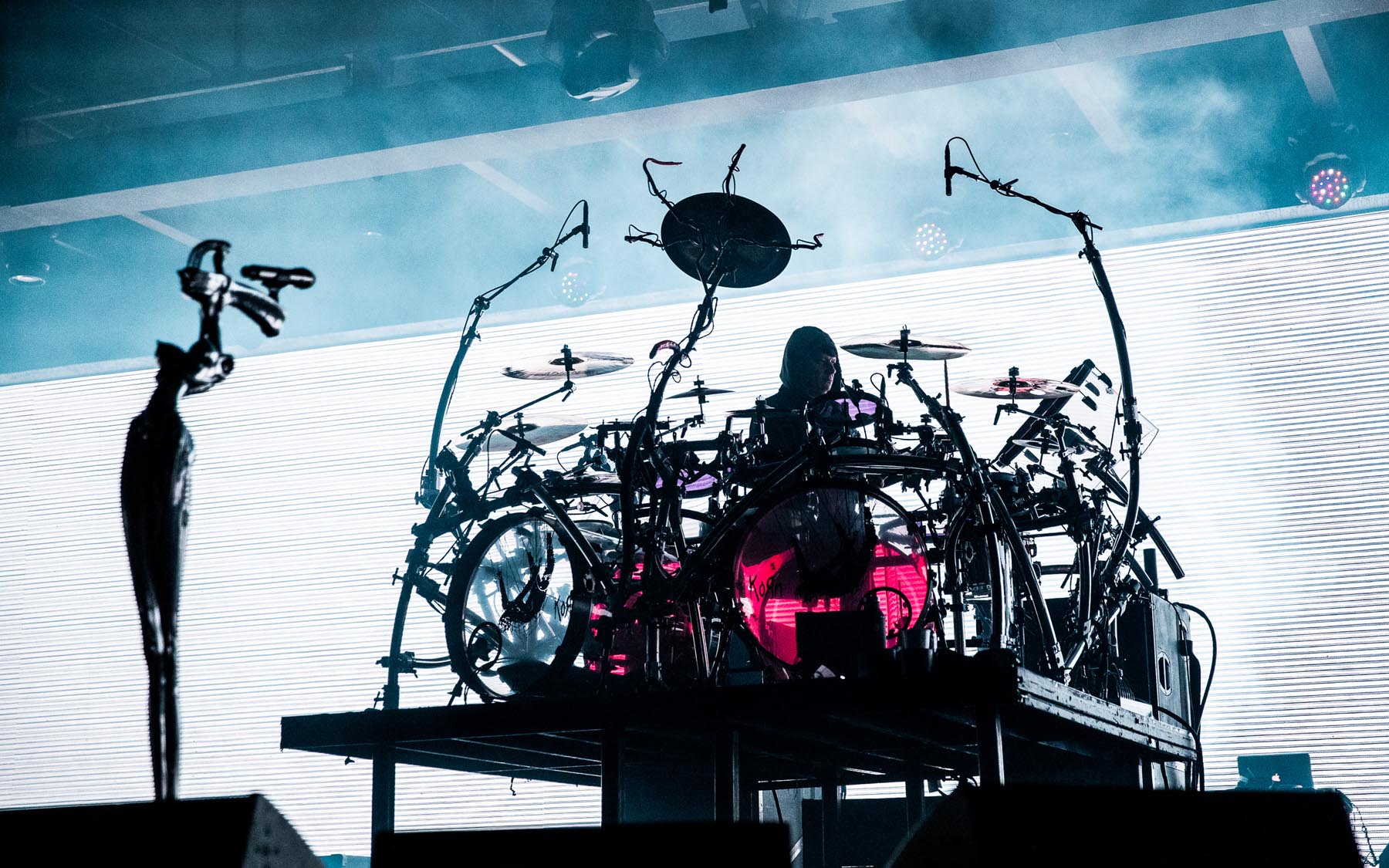 In keeping with a general trend in live streams during these locked in times, the selection of songs would see every era of the band almost equally represented and a number of surprising deep cuts that have scarcely been heard outside of their studio original versions in the past 5 or 6 years. Yet given Korn’s fairly concise and minimalist style, each offering came off as a banger, even when considering the generally dissonant and grim character of the music itself. The opening number “Victimized” ushers things in on an unexpected note, as the band opts to warm up the online audience with a deep cut off of 2013’s “The Paradigm Shift” that had never been performed live previously. The song tends towards the more melodic and infectious side of Korn’s spectrum of musical expression, with elements of the popular dub-step sound of the early 2010s being worked into the song’s periphery and Davis’ vocals being mostly clean in demeanor, resulting in Yin effect that would be immediately countered with the darker and dirtier Yang follow up song “Cold” off their latest studio LP “The Nothing”.

Perhaps the only thing more noteworthy than the interesting song selection that was at play last Saturday afternoon was competency in execution that found them all sounding near identical to their original studio incarnations. The deep chugging mud and quirky, higher pitched drone work of Munky and Head on such old school bangers as “Freak On A Leash” (also bolstered by precision-based, neurotic take on scat singing by Davis that mimics the original to a fault) and debut album funky groove-thrasher “Ball Tongue” were masterfully accomplished, to speak nothing for the complex nuances provided by bassist Fieldy and drummer Ray Luzier (who does an exemplary job of emulating David Silveria’s flashy beats from the early years). But while the instrumental backdrop is clearly nothing to be scoffed at, the emphasis is continually drawn back to Davis’ vocal performance, as he cycles through a smorgasbord of clean and dirty vocalizations, sometimes flirting with pop territory as the melodic hooks get thrown out on the softer parts of newer material like “Can You Hear Me” and “Insane”, then seamlessly reaching into the guttural extremities of the male range as if a guest singer had commandeered his mic. 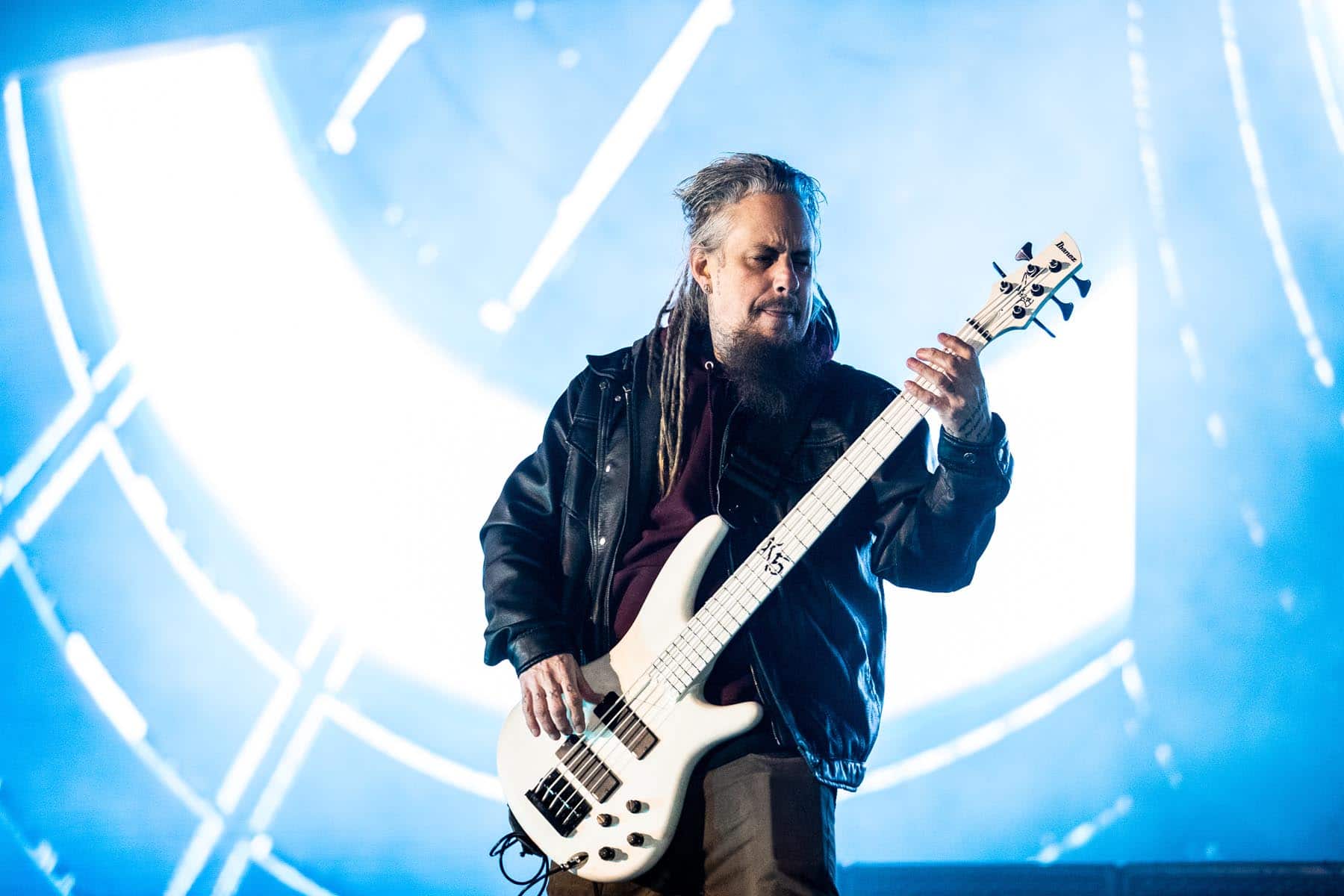 Though ultimately culminating in just over an hour of live music, Monumental ultimately lives up to its name, jamming 17 compact anthems into a single, streamlined performance and giving the audience a taste of everything that the band has accomplished over their extensive career. In many ways it parallels the epic series of performances rolled out by Sweden’s Avatar earlier this year, albeit in a much smaller and less technically charged package. To call it a boon to the concert-starved masses that make up Korn’s core fan base would be an understatement; and it’s yet another example of how the music scene is successfully adapting to the sad state of the world at present rather than succumbing to it. It may come off as counterintuitive, but for a band that generally writes about the darker side of life, Korn has shined a massive auditory searchlight into the homes of every live stream onlooker, illuminating a future that is hopeful and ultimately free of its current chains. L.A. may be shut down again today, but it was anything but just a couple short days ago.