Closing a gap of live performances that extended over the course of the last 5 years, the absolute master of conceptual horror and frightening musical tales has returned. The reign of light will now give way to a menacing veil of haunting melodies, ominous guitar riffs and earsplitting vocal melodies, as we mortals gather together to worship his eerie dark persona, while he conjures ancestral rites on stage: King Diamond is back on the road.

Practically at the beginning of his current North America tour, the only South Florida date saw King and his cohorts landing at the lavish Dr. Phillip Center Theater, in Orlando. Since early in the afternoon the grounds of the beautiful venue were flooded by metal-heads of all ages sporting their best King Diamond‘s looks, including a woman fully disguised as a nun and a guy donning the Abigail’s coachman attire. The air was packed with a palpable excitement and the merch lines were comparable to the ones I saw earlier this year at the two Iron Maiden shows we attended.

This tour stage production differs a bit from the one used during the “Abigail In Concert Tour” in 2014, with some elements added that channel the story to be told in King’s upcoming 2020 album “The Institute”. The already impressive dual-staircase catwalk that has been part of his shows for a few years now is still present, against a backdrop showing a couple of gigantic and sinister hooded silhouettes. A humongous and ominous inverted metal cross commanded the uppermost epicenter of the area connecting both sides, straight above Matt Thompson‘s drum kit, while under it there was a section adorned to resemble the walls of an old asylum, a door to the center with a tiny window covered by security bars and the number nine painted on it. To the right-hand side a rusted sewer gateway showed its gloomy metal illuminated by fading red and green lights and creeping smoke. 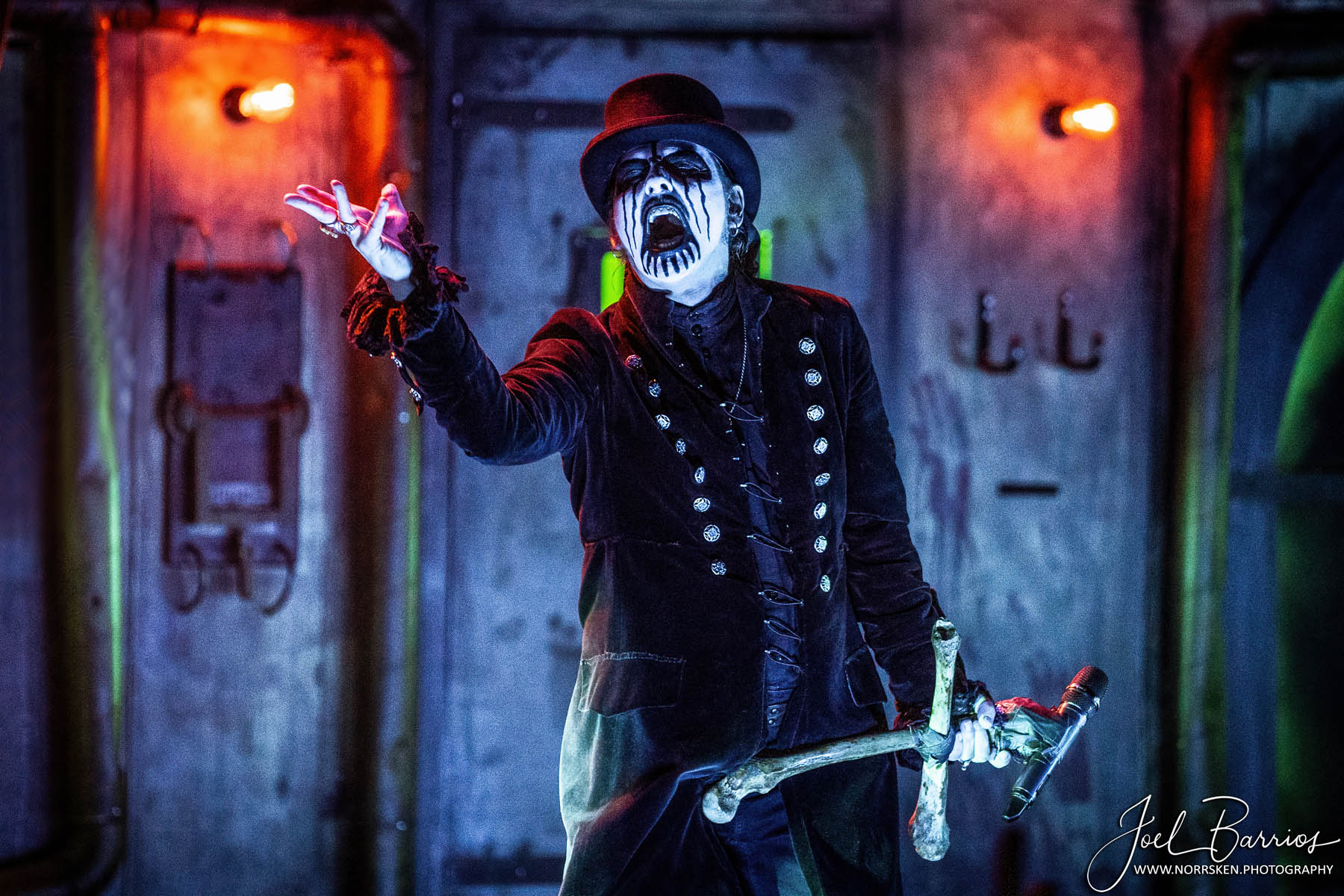 King Diamond proving that he’s like the wine, better with age

Carefully planned and downright spine-chilling theatrics are a staple element in King Diamond’s visual presentation, and this tour is not different. Coming out on stage through the aforementioned door in a sanitarium-looking wheeled stretcher, you don’t only get to enjoy the stories told in the songs through the music being played, you get to picture them through King’s own baleful vision, in an immersive spectacle unfolding in front of your eyes.

Since the first note coming out of his mic is clear that King is in peak form, hitting his infamous falsetto effortlessly, with his wife Livia joining him on the chorus in certain parts. Is a true delight to witness the master of the macabre performing at this level, despite past medical complications. The guitar tandem of lifelong partner and revered axeman Andy LaRocque and Mike Weed delivered fluid, clear-cut solos and towering, ear-punishing riffs, while the intimidating rhythm section of drummer Matt Thompson and bassist Pontus Egberg provided the precise backbone for a sonic attack which had the audience shouting the lyrics and throwing horns high in the air since the first song through the last, like if demons had taken over the venue in a deafening trance.

Throughout a set-list including cuts spanning from his debut album “Fatal Portrait” to his just released new single “Masquerade in Darkness” the ambiance was elevated by a myriad of elements:  While playing “Abigail” two cloaked gentlemen appear carrying a coffin engraved with Abigail’s name and place it stage center, King comes, opens it up and grabs the doll by its hair, stabbing her with a spike. During “Voodoo” a dressed-in-black dancer joins the band moving around King in some sort of exotic rapture while he tries to push her away. “Masquerade in Darkness” sees her wandering downstairs while twisting her body in pain, carrying a metal restraining mask on her head and asylum clothes, and when the band attacks one of the most surprising songs, the B-side “The Lake” she storms the stage as a nun holding a giant crucifix, which King violently takes from her hands, holds by the bottom end and let it swing to become an inverted cross, to the nun dismay. A ritual moment in the show transpires during “Welcome Home” when one of King’s more recognizable characters, Grandma, made her traditional onstage appearance in a wheelchair, wearing a ghoulish mask and pounding a cane. 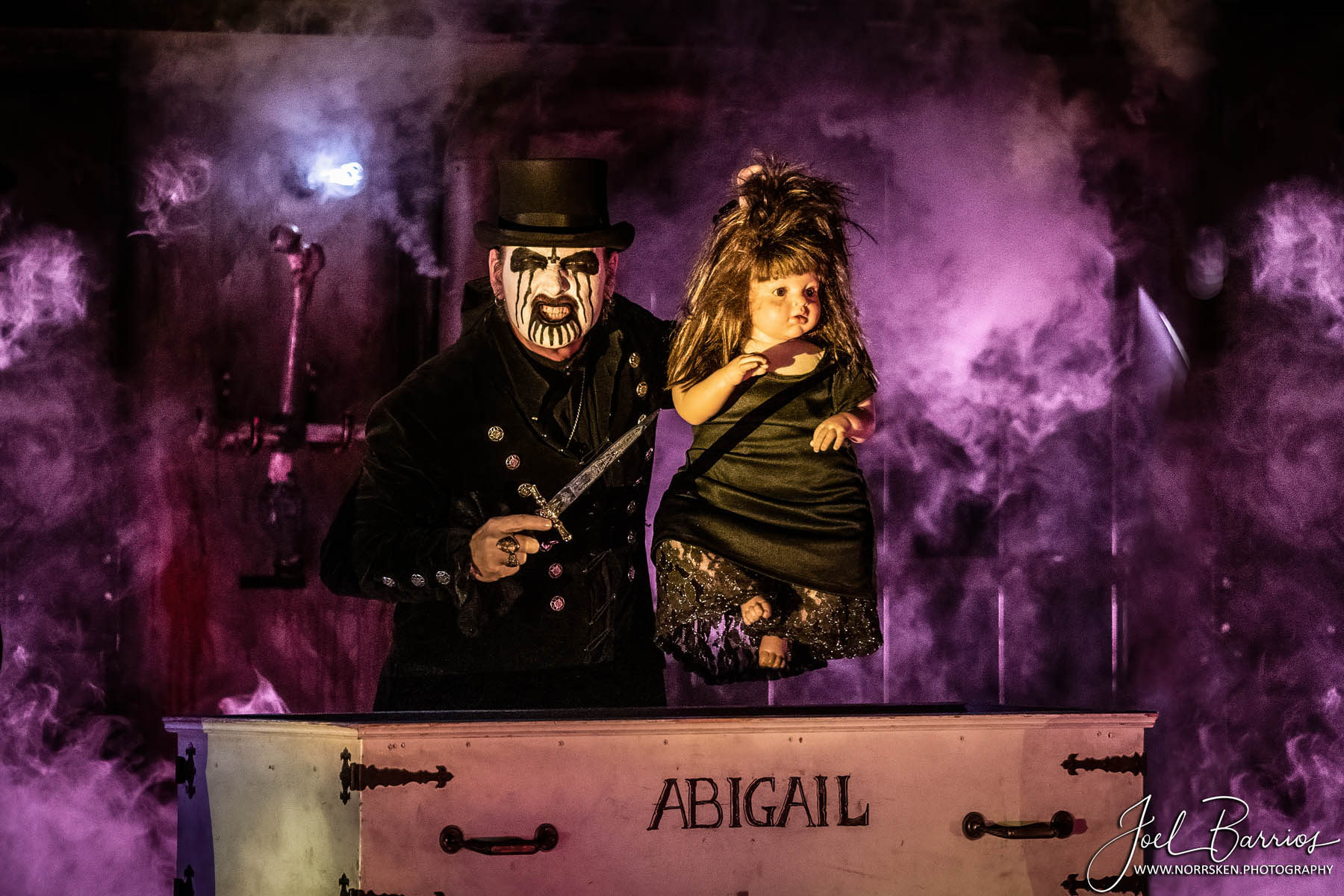 The encore comes in the form of “Burn” straight from the 30 years-old “The Eye”, with the final song arriving in the form of “Black Horsemen” to be permanently dedicated each time that is performed live from now on to the memory of the recently deceased Mercyful Fate and King’s bassist Timi Hansen. The unnerving acoustic guitar intro carried a more somber and momentous meaning in a song that masterfully displays how to incorporate narration, acoustics, swift tempo changes and perfectly structured solos. Its beauty and complexity served as the perfect sendoff for the night with the entire band coming to the edge of the stage to shake hands and salute the fans, tossing them guitar picks, and drum sticks.

Despite the night flew by – and I’m sure many could have easily stayed for another hour or two – the show leaves you in some sort of a heavy metal bliss state of mind. King is pulling no punches and showing no sign of slowing down and you will be an utter fool if you don’t creep out of whatever forgotten dungeon your spirit has being thrown into, and force yourself to attend. Believe me, your metal soul needs to bathe into the magnificent contrast of beauty and sorrow, agony and rage that only King Diamond can deliver.