After tours around the globe, Florida’s Kamelot returned to North America during the months of April and May, in support their recently released album The Shadow Theory . Bringing the biggest production and package in the group’s history, the tour ventured north and into Canada before extending through the Midwest, ultimately reaching the West Coast before circling back to the South; and fortunately for the Atlanta‘s metalheads the third from the last tour date touched The Center Stage. Joining Kamelot and bringing their unique brand of symphonic metal to the tour were very special guests Delain from The Netherlands, and rounding off the package for a metallic triple punch were Finland’s own Battle Beast.

Battle Beast inaugurated the night, and they were firing on all cylinders with singer Noora Louhimo taking the spotlight. Their extremely straightforward approach, which emphasizes crunchy grooves, spacey yet tight keyboard-drenched atmospheres and hook-oriented songwriting has all the elements to peg them as the illegitimate sons of mid-80s Warlock and Accept, with maybe a tad bit of earlier 80s hard rock after the mold of Survivor and even Journey elements at the fringes. With a set-list revolving around straight up heavy metal style anthems such as “Straight Through the Heart” and “Beyond the Burning Skies” to the more pop-oriented tunes like “Familiar Hell” and the disco-to-boot “King for a Day” they were very fun to watch and gained several cheers throughout their set.

After the usual changeover, which lasted approximately 30 mins, Delain came on stage while “The Monarch” played over PA. With keyboardist Martijn Westerholt and drummer Joey de Boer in the back on elevated platforms, guitarists Timo Somers and Merel Bechtold, alongside bassist Otto Schimmelpenninck held the front line; while the band charged through an excellent set of old favorites and more recent cuts, with vocalist Charlotte Wessels constantly moving around the stage and engaging with everyone, particularly the two guitar players. The other band-members were no slouches in terms of crowd participation either, leading frequent request for the audience to sing, jump and clap. The band closed their set with “We Are The Others”, unanimously clamored by the motivated fans. 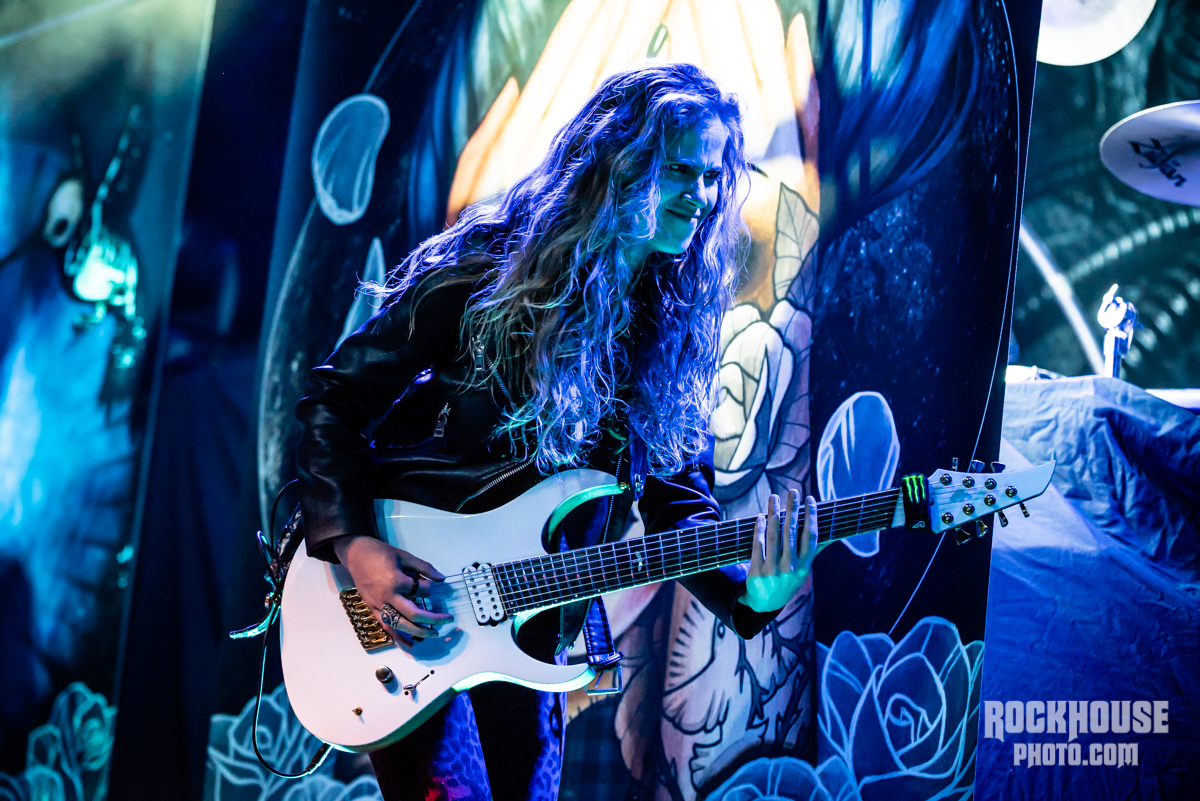 Merel Bechtold on guitars with Delain

As the stage was being uncluttered and prepared for Kamelot, the anticipation build up, and the few empty spots in the general audience floor became scarcer. A giant backdrop was slowly lifted, showing the artwork for the band’s recently released album The Shadow Theory, and “Knight’s March” started making its way through the airwaves. The drum-kit was located in the center and atop a very high platform, and the suspended cymbals reflected the dancing light beans, the whole stage looked very menacing and entrancing. Slowly, and amidst an phenomenal crowd eruption Sean, Oliver, Thomas and Alex Landenburg (Luca’s Turilli’s Rhapsody’s drummer filling in temporarily for Johan Nunez) creeped to their position, the first notes of “Phantom Divine” started to sound, Tommy walked to the center downing his usual hoodie and combat boots, raised his hands in the air, and Atlanta welcomed the illustrious power-metal titans one more time.

During the 14 songs-long set the band seemed to be enjoying as much as the fans did, with Thomas bringing a camcorder attached to a stick, aiming at the audience and asking them to scream at the top of their lungs “as they were filming the sets for a future Blu Ray release” and Tommy descending into the photo pit to share handshakes with the front row attendees and picking up random phones to film around the crowd from his own perspective. As expected the restless Sean Tibbets sort of stole the visual part of the show with his constant headbanging and metal stances while playing the bass furiously. Once Human‘s singer Lauren Hart  provided  the growling vocals in several songs, with a particular great performance during “March of Mephisto” in a vocal duel counterbalancing Karevik‘s clean voice. After “Sacrimony (Angel of Afterlife)” they disappeared backstage to come back 5 minutes later and attack on “Liar Liar (Wasteland Monarchy)”, sort of an odd choice for an encore, but tastefully executed and featuring a beautiful vocal due between Tommy and Lauren.

A highly entertaining night of symphonic and power metal, all three bands seemed to give their very last ounce of energy in a performance which surely will linger in the memories of the fans who stormed one of Atlanta’s prime heavy metal venues.