According to blues guitar player Joe Bonamassa, Red Rocks shows have become a special annual event. In fact, this marked the 5th year in a row he’s come to Denver to play the iconic open-air outdoor venue that is a long, wide string of concrete stairs wedged between two massive red stone walls. Made famous by a number of memorable shows, including The Beatles’ only concert not sold out on their 1964 U.S. Tour, and ‘s “Under a Blood Red Sky” video, the venue is truly one like no other.

When the weather is acting up, it can be rough. I’ll never forget watching Rush play “Chain Lightning” at Red Rocks, with their massive video screen behind them showing animated lightning bolts that appeared to bleed right off the screen and into the sky as real lightning went off around us simultaneously. Many artists have it on their bucket list of places to play and for good reason. Because on a night like last Sunday, it’s just about perfect (except for the heart-attack inducing hike up the stairs and the $10 bill for a small beer). 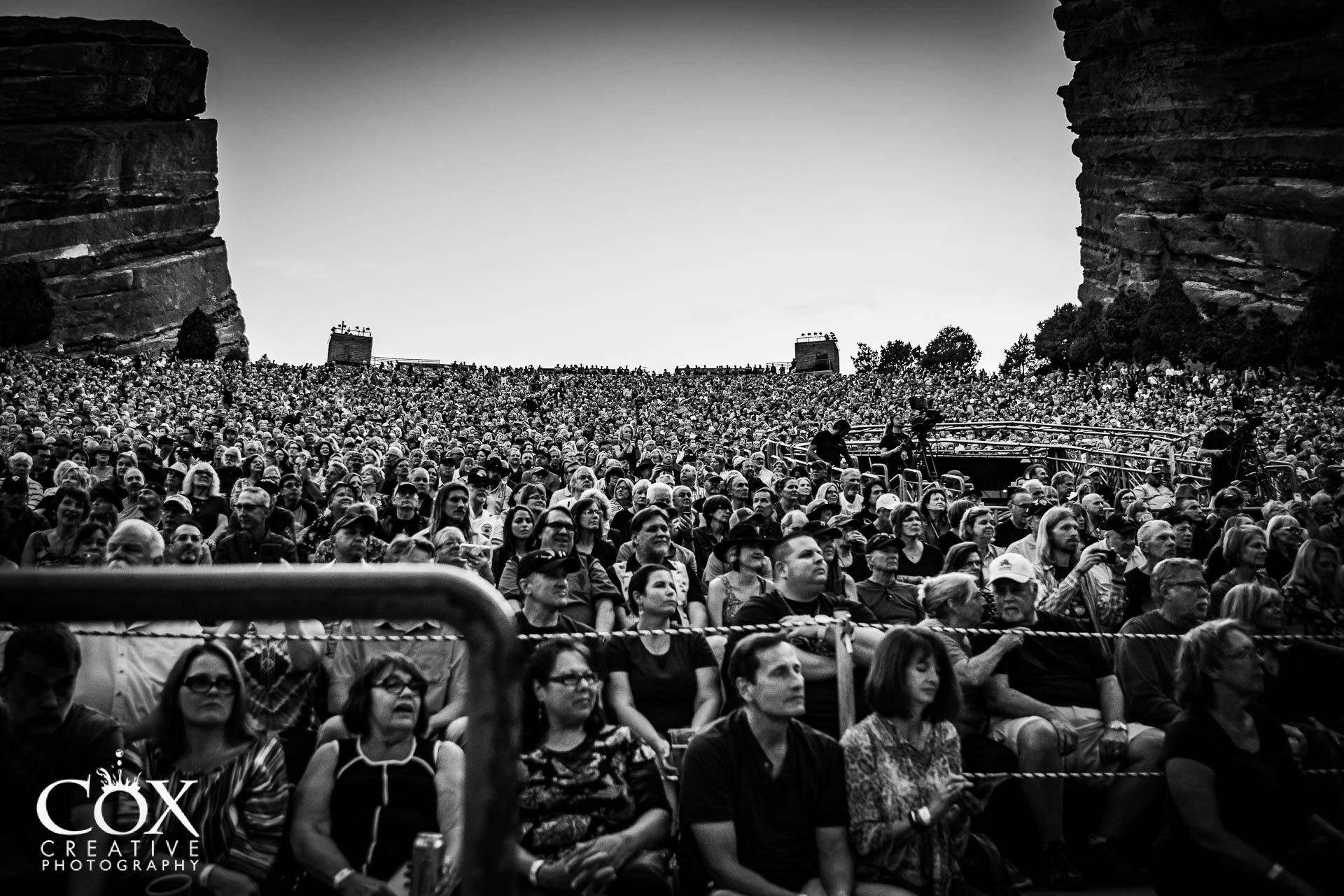 It was a cool evening, with a slight breeze, and 8,000 “mature” fans on hand to see Bonamassa play the blues. This was the first year a second show was added, as previous years had been very well attended and received. I don’t know how well the second show (Monday night) sold, but there wasn’t a lot of free space to be found anywhere on Sunday, and once again I got the crazy dancing lady sitting right next to me, working hard to block my view while she held her beer overhead and spilled it on those in front of her when she faltered occasionally.

But that’s what Joe does live. He gets people feeling good. And he travels a lot of different roads that all lead to the blues with enough diversity to keep the show engaging throughout the generous set. Right on time, the band walked on stage an opened with a cover of the Muddy Waters classic, “Tiger in Your Tank.” Joe’s version was stomping and an energetic opener that set the stage for what was to follow all evening—unbridled guitar solos, whirling organ, sassy background vocals, bleating horns and a thunderous rhythm section that were pushing forward in sync and having fun without sacrificing an ounce of precision. 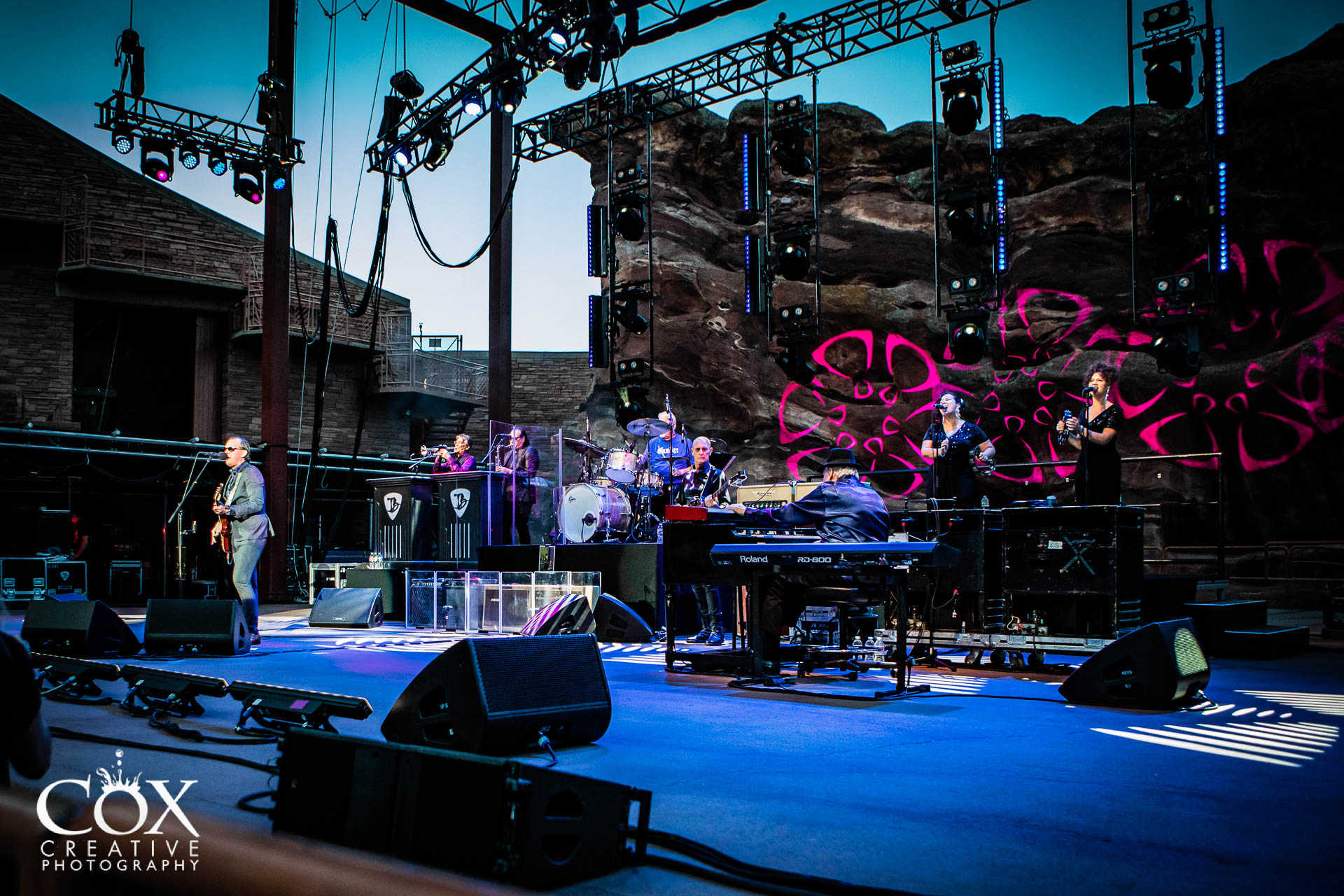 The Bonamassa second to none band

This traditional cover was followed by a funky original—“Evil Mama” from Joe’s last studio record, Redemption. With its infectious, grooving bass line supplied by legendary Nashville sessions bassist Michael Rhodes, it had the crowd amped up, moving and smiling. Fellow Nashville resident Reese Wynans, who logged years playing keys with Steve Ray Vaughn and Double Trouble, displayed his considerable chops with a smooth but laid back stage swagger that supported or shone, depending on whatever was needed at any given moment.

In the past, these two were typically sharing Bonamassa’s stage with drummer Anton Fig, who played nearly three decades with the David Letterman house band. According to Bonamassa, Fig wasn’t able to be there due to a conflict with an upcoming awards show rehearsal, so a photo of Fig was taped at the base of the drum kit and the seat was being filled by another Nashville cat, Greg Morrow (who had never played Red Rocks before). Though Fig is always enjoyable to catch live, Morrow was a rock solid replacement. Considering he tours with Bob Seger, and won 2008’s and 2015’s Studio Recording Award for Drummer of the Year with the Academy of Country Music, it shouldn’t have been much of a surprise.

What often is a surprise for those seeing Bonamassa live for the first time is the power generated by Mahalia Barnes and Jade MacRae on background vocals. These Aussie ladies refuse to be relegated to some secondary status and they are an indisputable force that bring a ton to the stage and sound while shimmying and singing. Also rounding out the sound was the punchy horns section of trumpet player Lee Thornburg (Tower of Power, Supertramp) and sax player Paulie Cerra. 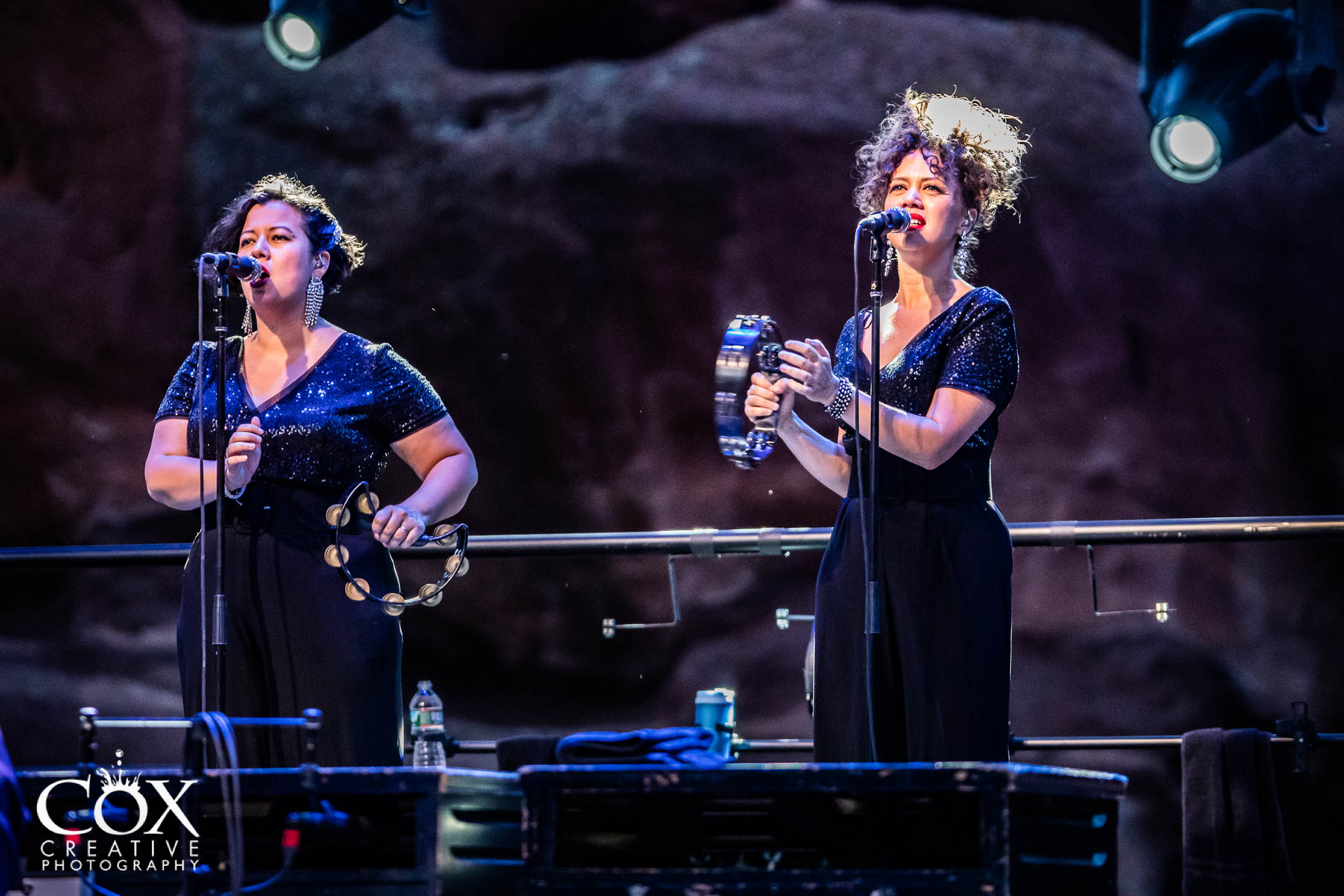 I can’t claim to like every track on any given Bonamassa record, but as long as a few key highlights are included in the live show, it’s a gig worth catching every single time you can. Fortunately, many of of those were in the set list. The obvious one came ninth in the set-list. “Sloe Gin,” which is kind of Bonamassa’s “Freebird” to me, starts slow and stirring, and while it doesn’t pick up in tempo, it builds into a gut-wrenching guitar solo (or solos) that seems to be different every time played live. It’s a signature song that makes you feel lonely and good at the same time. While “King Bee Shakedown” and “This Train” were upbeat steamrollers, “Blues of Desperation” and “Tea for One/I Can’t Quit You Babe” were smolderers, adding enough variety to keep the set from sounding too “samey.” (It’s the blues, so…)

Bonamassa donned a different guitar for every song, but maintained a confident voice both on the strings and microphone all night long. Like Eric Johnson, Joe has a pretty unique voice that might inspire differing opinions, but I find it to be part of his overall appeal. The second highlight track was the “Ballad of John Henry,” which is okay on his studio album but comes alive in a live setting. To this ears the essential rendition of this anthemic song is the one he recorded with Black Country Communion on their Live Over Europe release, where he plays a theremin to dramatic effect while Derek Sherinian extends the jam into a Billy Cobham “Stratus” romp. In addition, Glenn Hughes works a filthy sounding bass and Jason Bonham cops his father’s “When the Levee Breaks” drum bits for a killer live track. The live version with the band this night featured no spacey sounding theremin or keyboard jam, but it still was a freight train with one of the best classic rock riffs you’ll hear. It brought the venue to its feet as the band disappeared to rally cries for an encore. 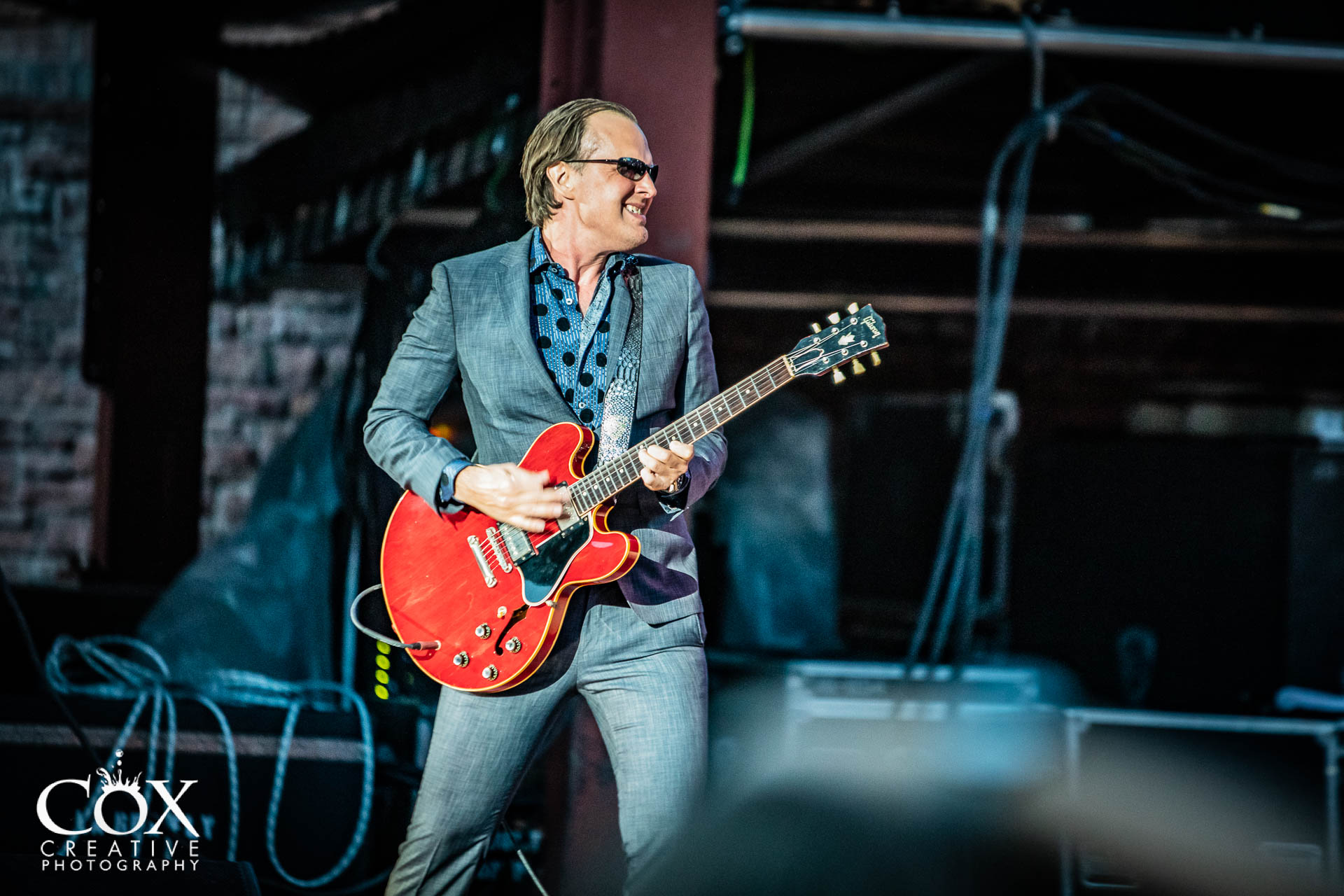 Joe doing what he does best: making his guitar sing

Joe reappeared alone playing an acoustic at breakneck speed in a rowdy version of “Woke Up Dreaming” that had the audience whooping and hollering. It was a display of acoustic mastery setting the stage for an electric version to come. In a very fitting conclusion to a show in the Colorado Rockies, they played a highly evolved and lengthy version of “Mountain Time” with a magnificent solo being full of both technique and feeling. It just felt heavenly. As did pretty much the whole set on this full moon night of blues on the rocks. Joe is one force-of-nature and a must see for any blues/blues-rock fan or anyone who enjoys guitar-led music. It is always a revealing experience to catch a goosebumps-inducing live performance of a rare talent like him. Bravo.