Rock and roll was alive and well and on display in bucketloads as Foreigner, Whitesnake and Jason Bonham’s Led Zeppelin Evening played to a packed house – a complete 12,500 person sell-out – at Alpharetta, Georgia’s Verizon Wireless Amphitheatre at Encore Park back on July 7th. While time has taken its toll on these bands – few original members remain – the heart, passion and performance are all still alive and well, as each band delivered a stellar set of now classic rock and roll.

First up was drummer Jason Bonham and his “Led Zeppelin Evening” showcase. If anyone on the planet has the right to perform an entire live set of classic Led Zeppelin it would be Jason Bonham, son of the legendary – and considered for many best drummer to grace a stage –  John Bonham. The band did an impressive job of recreating the originals…you know them by heart…“Immigrant Song,” “Good Times, Bad Times,” “Whole Lotta Love,” “Rock n Roll” and of course, “Stairway to Heaven.” While the performers didn’t try to dress or perform as the original members – this is not a tribute band – I will say that if you blurred your eyes enough, the guitarist bears a striking resemblance to Jimmy Page. 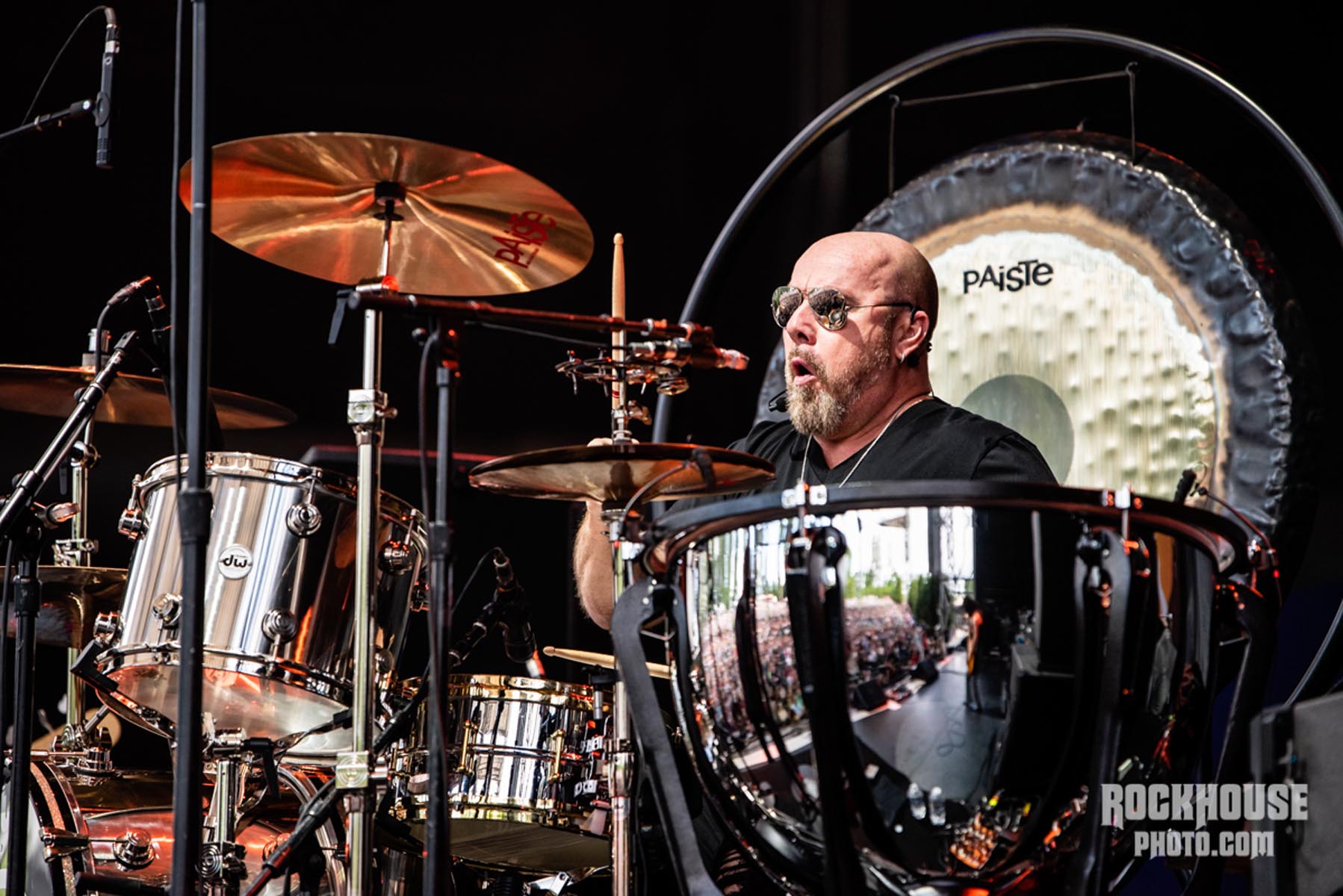 Whitesnake was up next, lead by singer and band founder David Coverdale. As he has for years, Coverdale walked out on stage and waved and gestured “Hello” to the crowd. He then grabbed the mic stand, flipped it upside down and with a thrust from his hips, pushed the stand into the air as the swell of guitars, drums and bass filled the air around him. He delivered his signature line – “Here’s a song for ya!” – as the band launched into “Bad Boys,” from Whitesnake’s colossal, mega-selling 1987 self-titled album.

Coverdale has always recruited top notch guitar players, and the current dynamic duo are no exception. Former Winger & Dokken guitarist Reb Beach has been in the band for 16 years now, and they have found a very suitable replacement for Doug Aldrich in Joel Hoekstra, a talented multi-instrumentalist with chops for days. Behind the kit was the ageless wonder, Tommy Aldridge, who, at a spry 67 years of age, is still bashing away like he did back in the 70s with Black Oak Arkansas. As they say in the world of professional football, the man has a “motor.” Rounding out the current line-up are bassist Michael Devin and keyboardist Michele Luppi. 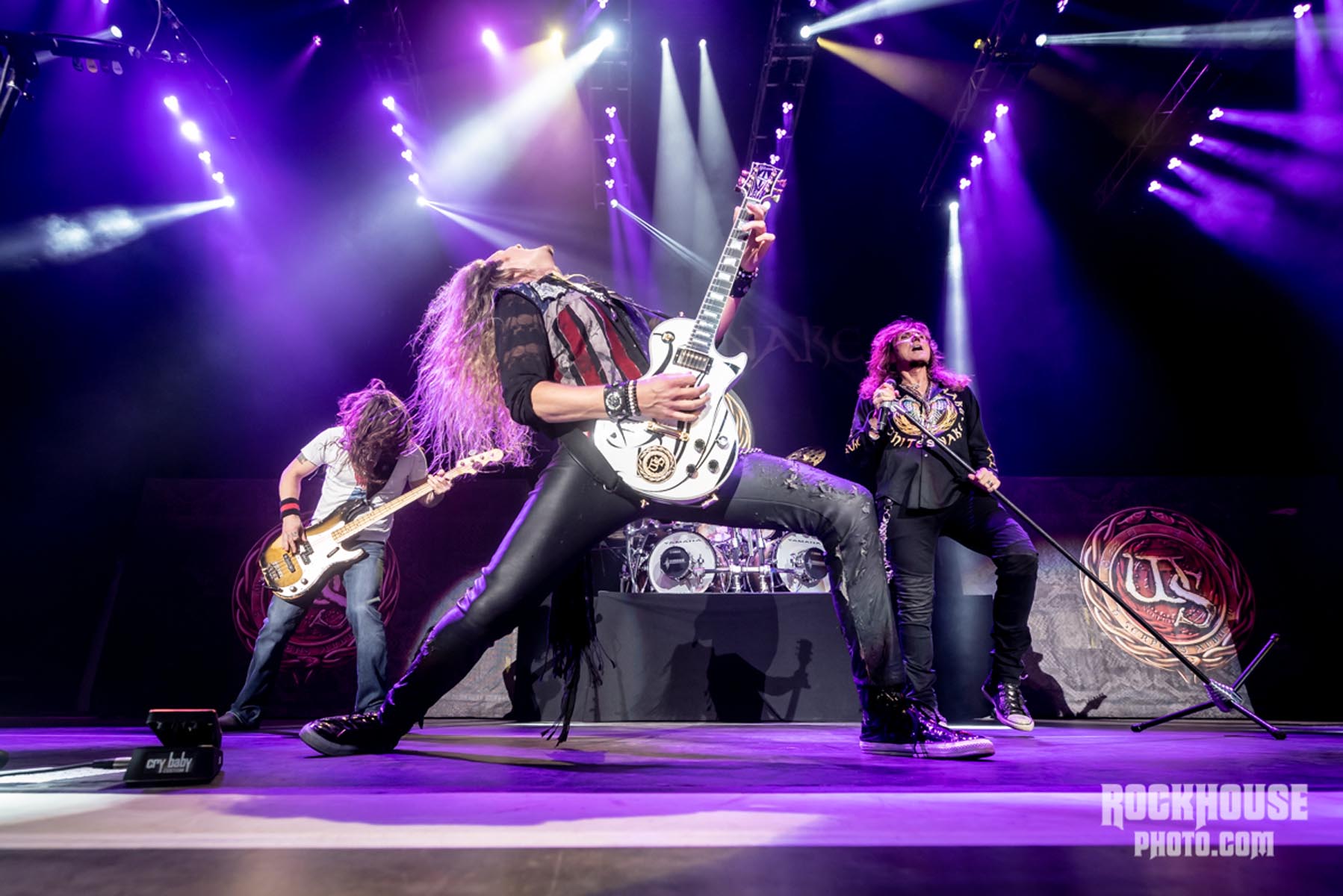 And finally the headliner for the evening, Foreigner! The band rolled out the colorful “big rock show,” complete with a hydraulic lighting rig, smoke cannons, lasers, flame pots and the long lost favorite of many a 70s band…dry ice! When’s the last time you saw a band cover the stage with dry ice? It worked on many levels, as many in the crowd were probably at one of those big rock shows back in the 70s. Yes, it was an older crowd, but the place was still rockin’ and sing-alongs spontaneously happened throughout the set.

Speaking of singing, lead singer Kelly Hansen does a phenomenal job of delivering original singer Lou Gramm’s challenging vocal lines, while interjecting some of his own personality into his performance. The guy is a ball of energy and was in constant motion most of the night. And in the middle of it all was founder Mick Jones. Jones doesn’t bounce around the stage quite like he used to, but his fingers still work just fine. Classic riff after riff flowed from his guitar: “Long, Long Way From Home,” “Double Vision” and “Feels Like The First Time” to name a few. His solo in “Starrider” looked downright trippy, as he stood on stage in a circular pattern of laser beams and spotlights, while the aforementioned bed of dry ice swirled around his feet.

There are a lot of surprises throughout Foreigner’s set, with some of the biggest coming towards the end of the night. I almost feel bad giving them away, so you know what? I’m not going to tell you…you’re just going to have to go see this show for yourself. You will not be disappointed!

Bad Boys / Give Me All Your Love / Love Ain’t No Stranger / Slow an’ Easy / Guitar Duel (Reb Beach & Joel Hoekstra) / Crying in the Rain (Incl. Tommy Aldridge Drum Solo) / Is This Love / Slide It In / Here I Go Again / Still of the Night

Encore: I Want to Know What Love Is / Hot Blooded