Swedish heavy metal band In Flames are back in the spotlight having just completed a new album – their 13th studio release – titled I, The Mask, out March 1st on Nuclear Blast. The band are already out on the road, and from the looks of their social media they’re going to be on the road for a very long time. The current U.S. run of shows with All That Remains and All Hail The Yeti landed in Atlanta, GA on February 14th…Valentine’s Day – the day for lovers… and if there’s one thing that I love, well, it’s heavy freakin’ metal! And, amazingly enough, that’s exactly what I got. So, on to the show…

Thanks to a slightly early start time and some extra-shitty Atlanta traffic, I missed the opening band All Hail The Yeti, but I did see the full set from All That Remains, who are on the rebound after losing original guitarist Oli Herbert. New guitarist Jason Richardson might not have the showmanship that Herbert had, but he’s definitely got the chops. These guy can definitely play.

The members of In Flames slowly appeared on stage one at a time before launching into the first single from I, The Mask: “Voices.” As the music took hold, I couldn’t help but notice the absence of guitarist Niclas Engelin. I kept thinking to myself: “Who is this buffed-out, California-lookin’ dude playing guitar? He looks familiar.” I was unaware that only a few days prior the band announced that Mr. Engelin would not be able to make the tour, leaving about two days for fill-in guitarist – Chris Broderick, formerly of Megadeth & Jag Panzer – to learn the 20+ songs that make up the set-list for the tour. I know that a musician at Broderick’s level might have a much easier time at picking up so much new material so quickly compared to a noob like me (yes, I’m a complete hack on guitar), but I was impressed with his performance none the less. Learning all that material was surely a daunting task, of which he handled without a hitch. 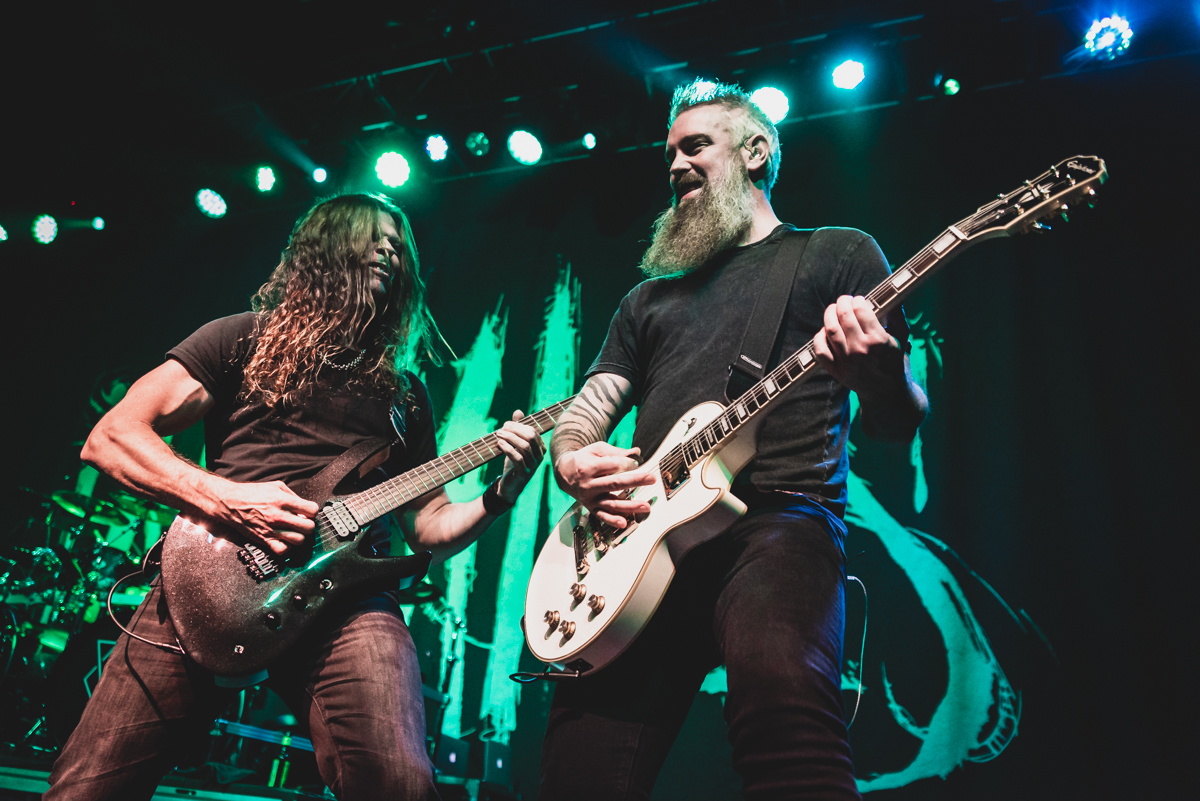 Speaking of all that material, In Flames definitely has a lot of it, and they pulled songs from just about every single studio album that they’ve released. I know the band’s sound has changed over time, leading to the never-ending “classic style vs new style” argument to be hashed out among the fan-base, but to me, the pacing and style of the songs – whether with clean or screamed vocals – flowed and meshed as one complete thought. While I’m a fan of the clean vocals of “The Truth” and “(This Is Our) House”, hearing lead singer Anders Fridén rip out his vocal cords on songs like “Colony” and “Leeches” was at the same time pleasing and fulfilling. Other stand out tracks to my ear were “Where The Dead Ships Dwell,” “Cloud Connected” and “Here Until Forever,” with it’s huge chorus and uplifting vibe.

I came away from my first In Flames show pretty impressed with what I experienced. Musically they’re a phenomenal band and they write great songs that stuck in my head. The copy of Battles that I picked up at the show has not left my CD player since that night, so they must be doing something right. I would have liked to have seen a little larger of a stage production, but it wasn’t a deal breaker by any means.

You can catch In Flames touring up the East Coast of the U.S. and into Canada for the next several weeks before they had back overseas for a European tour starting on April 3rd.