It was a bitterly cold Tuesday evening for the usually mild month of November, but despite the chill, I made my way dutifully to the House of Blues in downtown Dallas. Upon approaching the venue, I saw fans shuffling down the street, bundled up in a futile fight against the cold as they walked towards the venue’s entrance in a frosty procession. The lineup of the night was looking to be well worth the pain; we were gathering to see Ice Nine Kills, supported by Awake at Last, Light the Torch, and Fit for a King.

Kicking off the night was Awake at Last, having made their journey from the far reaches of Delaware to play in front of a growing audience. Their entrance on the stage was a familiar, soothing ritual; from the side of the stage walked the drummer, making his way to sit behind the drum kit as though it were a throne. Following him was vocalist Vincent Torres, who rushed up to the microphone at a dead sprint and welcomed us all to the show with enthusiasm dripping from every word. As the rest of the band came to join them on stage, they started off with “Purgatorium,” which was already enough to spur the defrosting crowd into cheers. The entire band remained in motion from the moment they took the stage until they finished their last song, running from one side to the other with endurance that was exhausting to merely witness. This exuberance carried through to their closing song, “The Change,” which was the single from their recently released debut album of the same name. 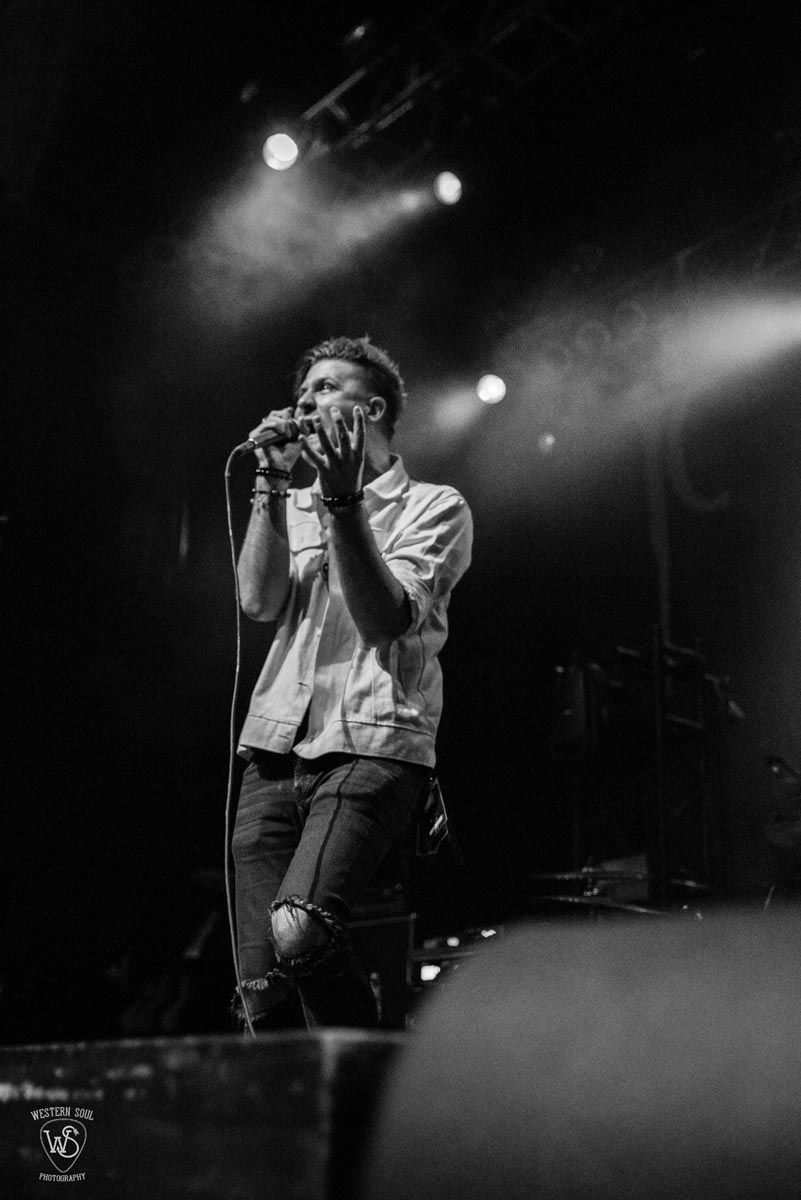 Vincent Torres with Awake at Last

Up next was Light the Torch, hailing from the warmer lands of Los Angeles, California. For their entrance the lights were dimmed to near blackness, which stirred the crowd to screaming and applause, still rippling with static from an electrifying open act. From the moment that front-man Howard Jones walked into the spotlight, it was clear the band had come to give their all up on the stage, a privilege granted to those dedicated enough to witness their performance. As soon as they struck the first chord of “The Bitter End,” the crowd showed their devotion by bursting into song, jumping along to words that the majority of attendees seemed to know by heart. All gathered in the House of Blues were treated to Jones’ vocal versatility and blinding stage presence, his seamless transitions from low guttural growls to vibrant singing reverberating flawlessly as he ran across the stage. 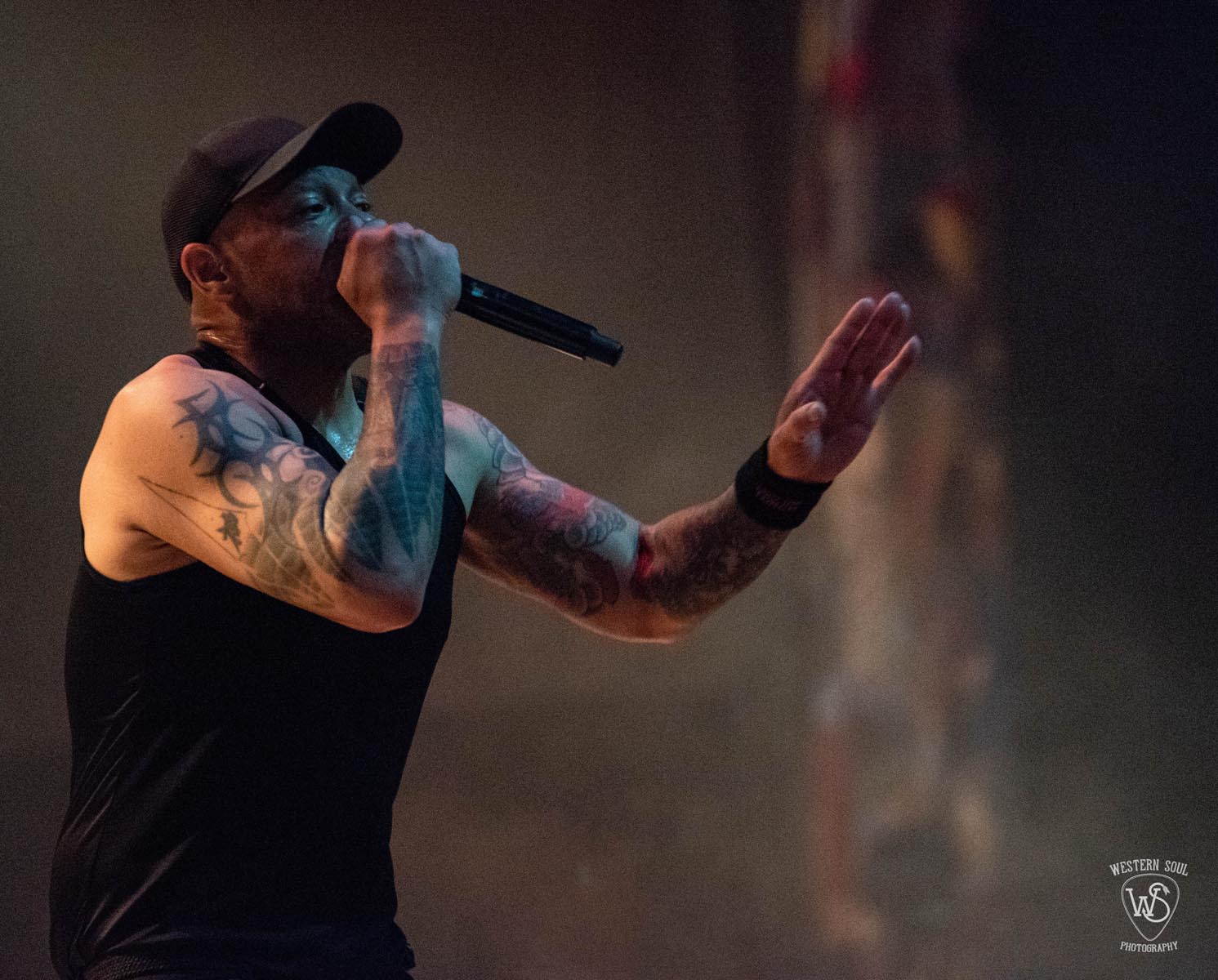 Of all their stage banter, the most exciting was the announcement that following the current tour, they would begin to work on their new album. As though that weren’t enough good press, they also noted that they would tour to support that album following its release. In the same relentless nature that characterizes their music, fans hardly had a moment to recover from the news before they launched into a personal favorite of mine, “The Safety of Disbelief.” Strobing lights illuminated hundreds of hands held in the air, horns pointed to the sky, and this high energy was returned by each member of the band. Each musician in Light the Torch was incredible to watch on their own, but it was hard to tear my eyes away from those instances where Jones and bass player Ryan Wombacher were singing alongside one another, matching one another’s intensity with practiced precision.

The third supporting act of the night brought sounds from close to home, and an evening filled with brutality was continued by Dallas natives Fit For A King. Taking the stage all at once in a wave of enthusiasm, they took their places and asked the crowd if they were ready to have a good time. When this was given an exceedingly warm reception, lead vocalist Ryan Kirby told everyone that they were from Dallas, and they were more than excited to be performing in front of their hometown crowd. With such pleasantries out of the way, they kicked off their set with “Engraved,” carrying with them the same infectious energy of the first two acts. They seemed to take up the entire stage all at once, running from edge to edge without pausing to catch their breath, and making sure that each segment of the audience got a fair amount of attention from each musician. 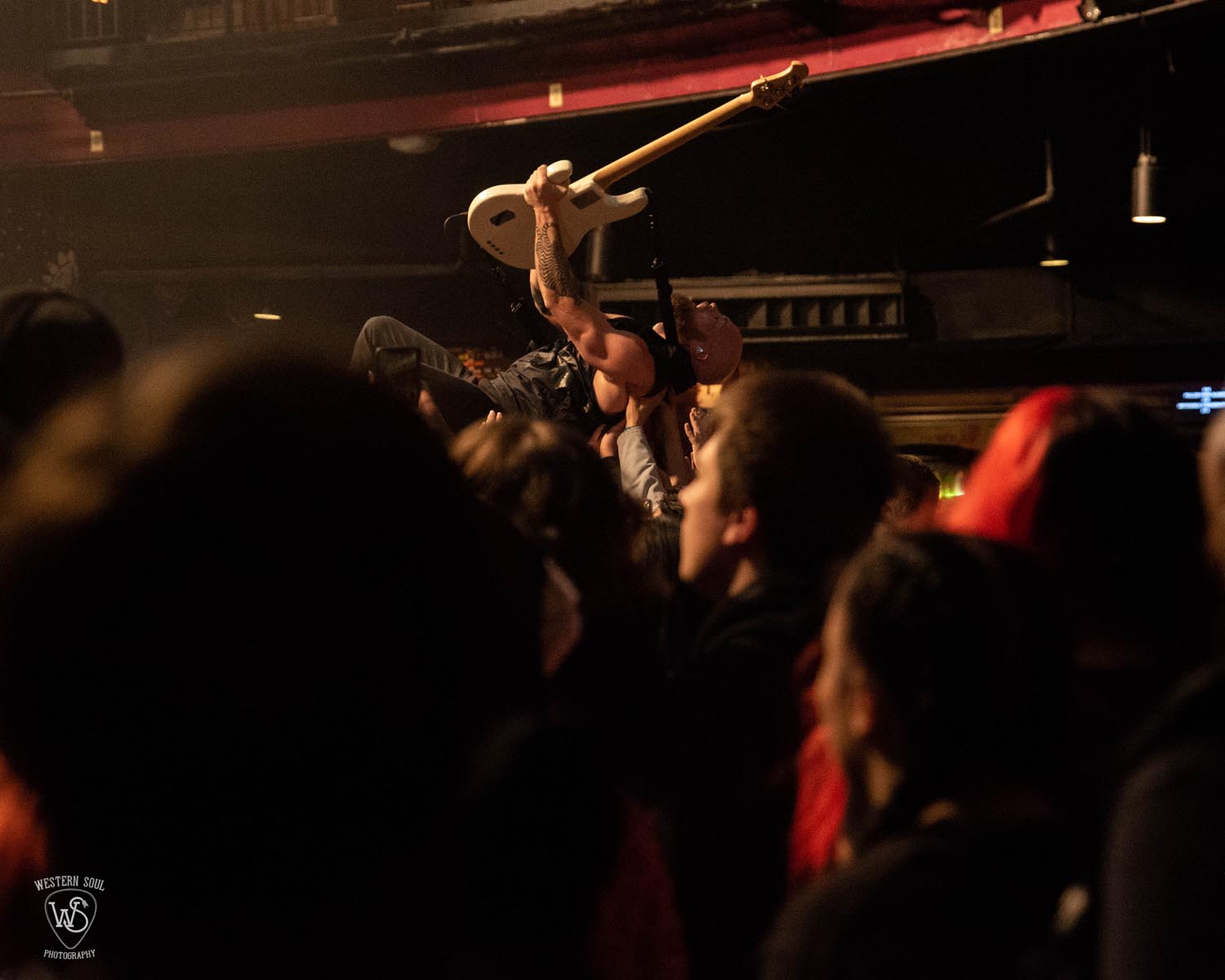 It soon became clear that they were fueled by more than some unknown source of energy; they were living in chaos to make a good time for all that had braved the cold. The good times of the night weren’t reserved for the audience alone: even while shredding at speeds and intensities that were difficult to grasp, band members took turns throwing themselves into the audience, continuing to play and sing even as they crowd-surfed. No matter how long they were held up by the hands of their adoring fans, they never missed a single note, pushing through the complexity with masterful precision. They absolutely killed it from the very first song up until their closer “Tower of Pain.” Just before they performed this final song, Kirby announced that Fit For A King would be back in their hometown soon; this time, they would return with a headlining tour. Between the song and the news, the crowd saw fit to create a circle pit that enveloped the entire floor.

The audience took their last chances to gasp for breath and recover, watching in anticipation as the set change took place. Excitement was tangible in the air, growing thicker with each passing minute as a rolling murmur grew into a deafening din of chattering. The atmosphere was nudged along by the wall of speakers playing not the typical metal anthems that fill set changes, but the theme songs to a countless reel of horror movies. Though I swore that the anticipation could mount no further, the crew moved a large red curtain to obscure the stage, leaving the set a mystery to be revealed after what would prove to be an agonizing wait. Even with the curtain blocking their view, the audience began to chant the headliner’s name, as though the band would somehow materialize if they screamed loud enough.

Fit For A King guitarist off the ground

As the final horror themes played at full volume, flashing lights illuminated the thin curtain, and the band’s silhouettes bled through in crimson shadows. Without warning, the curtain dropped in a brilliant rippling wave, and the artists charged to the front of the stage like beasts from a cage. Each member was dressed as a different classic horror character, and they started off their show with “Thank God It’s Friday.” With lead vocalist Spencer Charnas dressed up as Jason, it was only appropriate for the audience to sing along with a song about Camp Crystal Lake from Friday the 13th. The second song was also given a unique intro of its own; it opened with Jigsaw from Saw speaking to the crowd, and a massive clown face was illuminated the entire time he spoke. After the intro drew to a close, the band members came out singing “The Jig is Up,” pulling on the vocal talents from three of the members at the song’s peak. 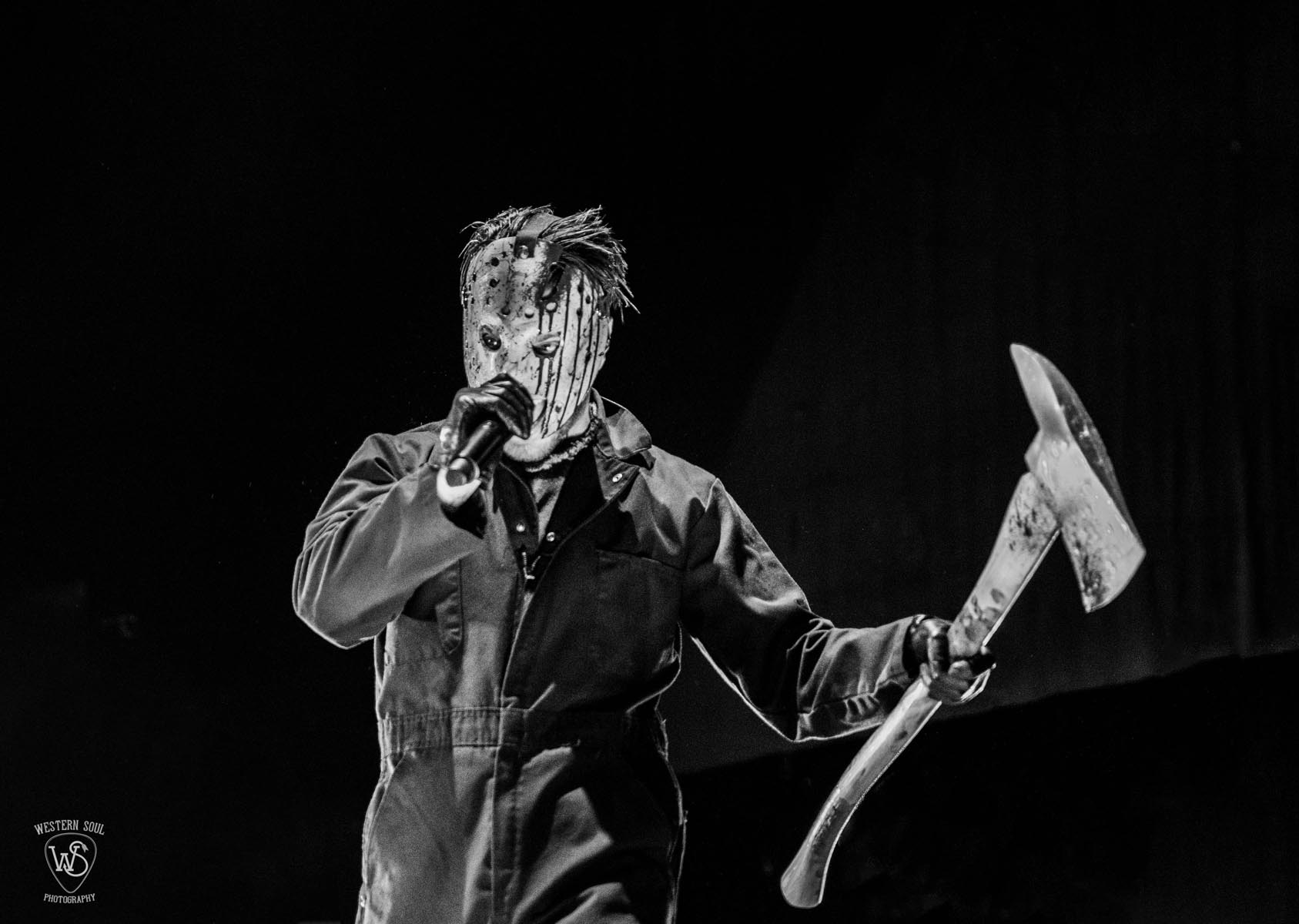 My personal favorite of the night was their third song of the night, an inspired performance of “Savages.” Charnas reappeared after having been whisked away to the back, this time with a mask on his face and the iconic shredded sweater of none other than Freddy Kruger. Only a few more songs passed before acts of pure theater continued; with a smile on his face, Charnas asked if the crowd was ready to be possessed. With screams of affirmation, he threw himself out into the audience, where he was lifted high above the sea of thundering shouts. He seemed to walk above the crowd as they carried him, though somewhat haphazardly, and he didn’t falter over a single word as he entrusted his life to the hands of a frenzied mob.

“Your Number’s Up” had its own gimmick, with a woman sauntering onto the stage, acting as though she were receiving a phone call. Little did she know, a killer was stalking; Charnas, dressed in inspiration from the movie Scream, rushed up behind her from the back of the stage. They continued to play through most of the songs off their recent album, “The Silver Scream (Final Cut),” which was released in October. About halfway through their set they played their cover of Michael Jackson’s “Thriller,” which led the crowd to sing and dance along with their unique rendition of the Halloween classic. 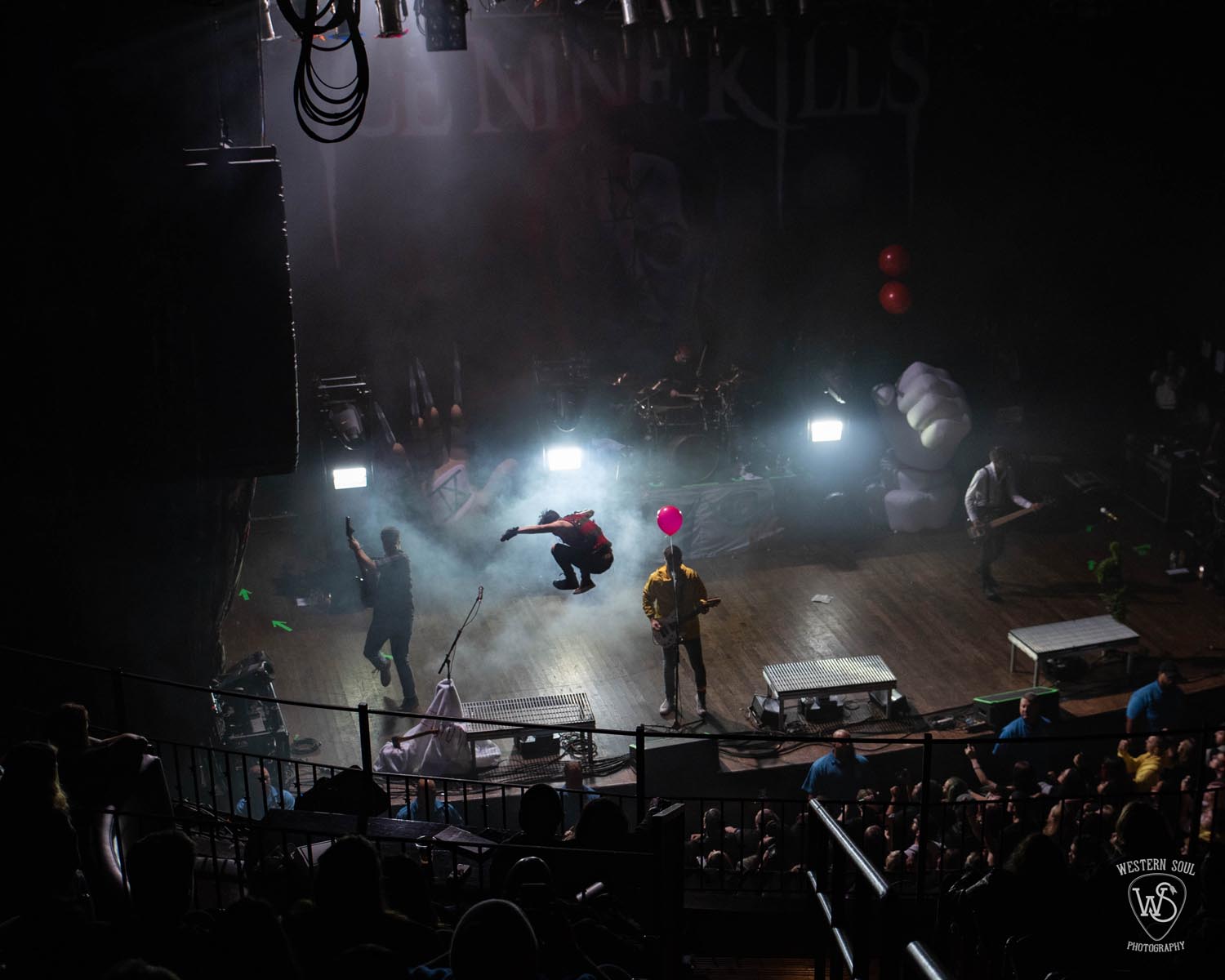 The main set was concluded with “The American Nightmare,” but the final song of their encore was “IT is the End.” Naturally inspired by none other than the horror movie IT, guitarist Ricky Armellino delivered his skills as both an actor and musician as he played the role of Georgie. From the very first song until the conclusion of their set, the members of Ice Nine Kills put on a show that was part metal, part horror theater, but one hundred percent exhilarating. Though their set spanned longer than an hour, and included acting alongside crushingly heavy music, they maintained their energy with seemingly boundless enthusiasm. It was clear that they were naturals at entertainment, living with joy in a spotlight where they could create thrills by harnessing horror through the power of shredding.

Each band on the bill has the uncanny ability to play with unstoppable energy, taking up the stage as figures that seem larger than life. Ice Nine Kills is an unquestionable show-stopper, and quite frankly, an act that would be hard for any group to top. I look forward to seeing them when they come around again, and will certainly make an effort to catch each supporting act their next time through the heart of Dallas. For any horror fans, Ice Nine Kills is an absolute must-see, as each set is a walking catalogue of the best that horror has to offer. Awestruck as I wandered back out onto the street, I left with not only immense satisfaction, but the burning desire to encourage anyone that would listen to catch this tour. From the very moment the opener took the stage until Ice Nine Kills took their final bows, this show was one I knew I would remember in crystal clarity.

Fit For A King Setlist

Thank God It’s Friday / The Jig Is Up / SAVAGES / The Nature of the Beast / The World In My Hands / Communion of the Cursed / A Grave Mistake / Your Number’s Up / Rocking the Boat / Merry Axe-Mas / Thriller (Michael Jackson cover) / Hell in the Hallways / Stabbing in the Dark / The Fastest Way to a Girl’s Heart Is Through Her Ribcage / Love Bites / Tess‐timony / Me, Myself & Hyde / The American Nightmare

IT Is The End