My first introduction to Greta Van Fleet (GVF) came during a January 2016 episode from the Showtime drama Shameless.  Their new song “Highway Tune” was featured during the show’s opening minutes and after first listen, I was hooked.

Fast-forward nearly four years to the day, I find myself fortunate to be covering GVF’s second sold-out performance in as many nights, in support of their debut studio album “Anthem of the Peaceful Army”, at The Met in Philadelphia. This historic venue, originally built as the Metropolitan Opera House in 1908, reopened in December 2018 after a complete renovation as an exquisite concert theatre.

Fans of all ages had lined more than a city block several hours before the doors opened, enduring freezing rain to witness this rescheduled show from October 16 of last year. Many I talked to had arrived early that morning, with some ‘die-hards’ even here the night before (after the first sold-out show ended), with the sole initiative of guaranteeing themselves a coveted spot near the front of the stage. 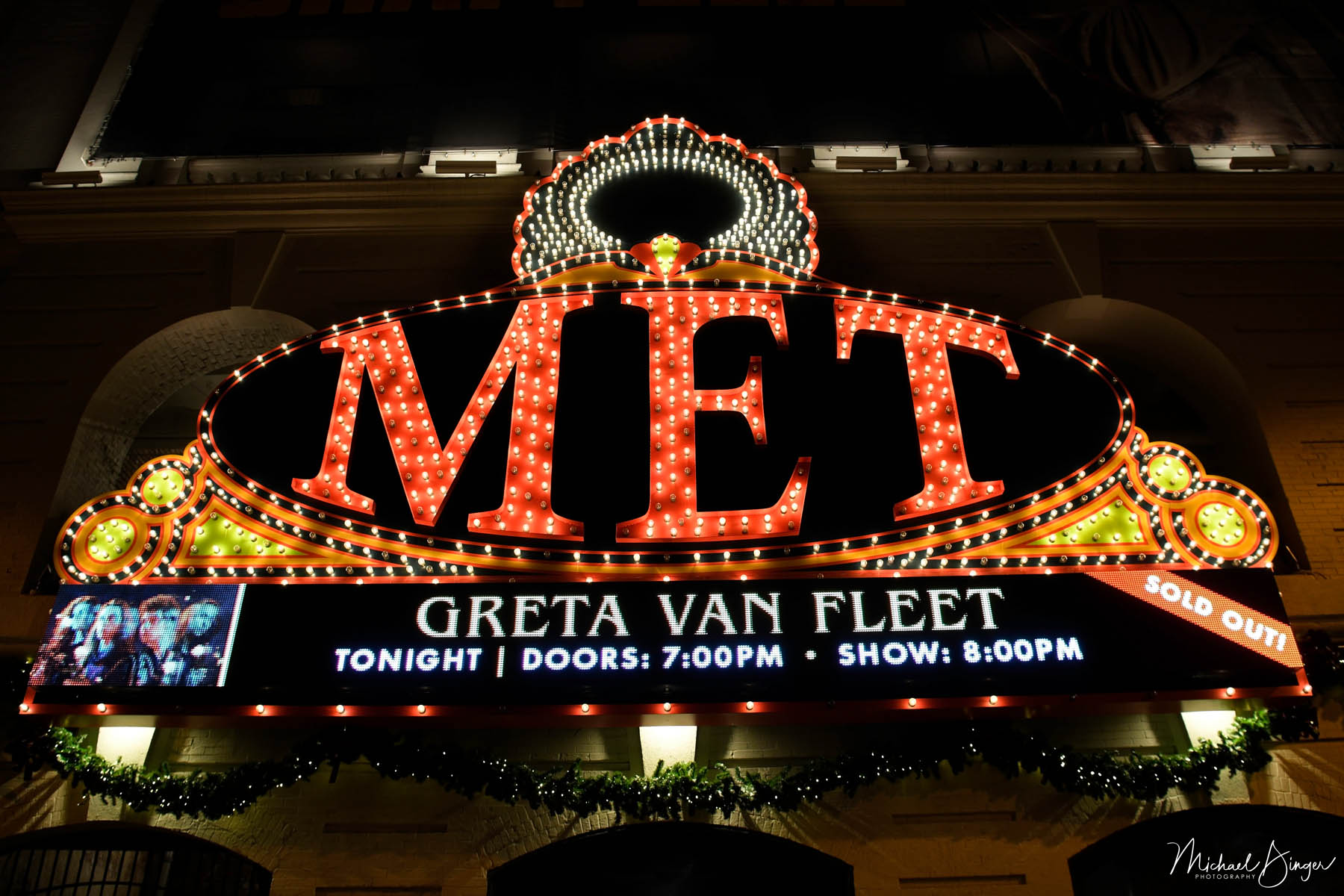 I entered the venue early, to soak up as much of the pre-show atmosphere as I could, before eventually taking my seat in the center section of the lower Orchestra. Seated a few rows behind the general admission audience on the floor, and at the same eye level, this was my first experience reviewing a concert where I was not standing in the ‘pit’ with my trusted camera held to my eye. Still, it did not take me very long to get accustomed to what turned out to be a refreshing experience, with the ability to witness the entire show from the perspective of a fan.

Taking inspiration from rock legends the likes of AC/DC, Black Sabbath and yes, Led Zeppelin (I promise that the comparisons will stop here), GVF are musicians in the early-20s with a distinctive, bluesy rock style all their own. Formed in 2012 and hailing from Frankenmuth, Michigan, GVF are a hard rock quartet comprised of three Kiszka brothers – twins Josh (vox) and Jake (guitar), and younger brother Sam (bass) – with long-time friend Danny Wagner on the drums.

The charming story behind the origin of their band name, Greta Van Fleet, is that it was created by simply taking out the “n” of the first name of a local elderly resident in their hometown, a Miss Gretna Van Fleet. Miss Fleet (age 88) is a musician in her own right who plays piano in the bluegrass band Holy Jeans with her husband a few times throughout the year. Gretna eventually met the band who adopted her name in 2013, at Zehnder’s Snowfest in Frankenmuth, having her picture taken with the boys onstage. 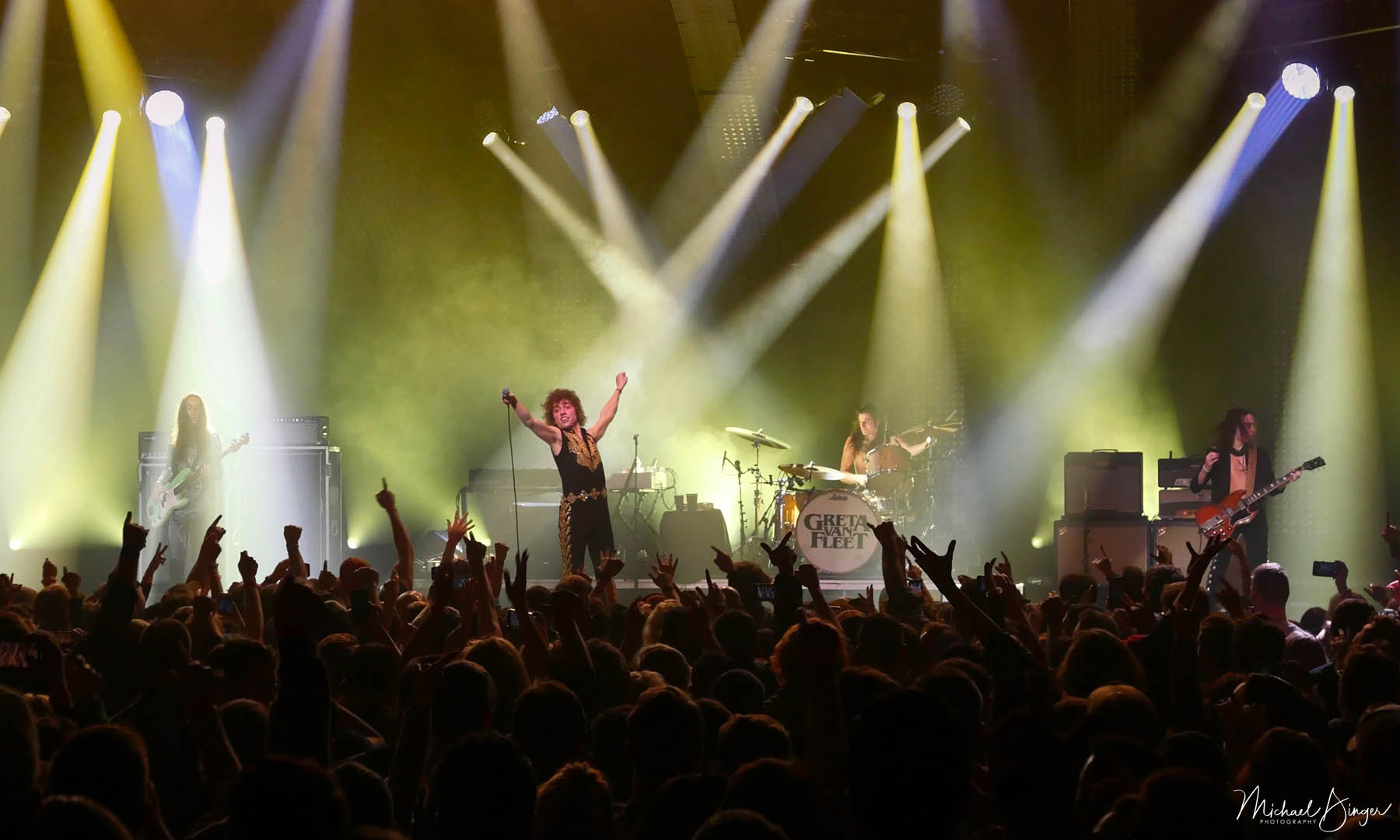 In support of our headliner and opening the show promptly at 8:00 pm was Aaron Lee Tasjan, an indie folk rocker from Wilmington, Delaware. Aaron, a singer-songwriter who also plays guitar and piano, was joined onstage by his road band members Tommy Scifres (bass) and Seth Earnest (drums). A highlight of this opening set was Aaron graciously introducing and welcoming a guest to the stage – 7th grader Sam Sentivan from the nearby borough of Rutledge – who played guitar during “Little Movies,” a song from Aaron’s 2016 album “Silver Tears”.

After a Motown-era song faded out from the speakers, the house lights went down and GVF took the stage at 9:25 pm. Emerging from the stage smoke were all four members dressed in vintage-style attire, echoing the throwback vibe of their band’s sound. The first offering from the 12-song set, and the first single from “Anthem Of The Peaceful Army”, was the blistering “When The Curtain Falls.”

The second song of the night, “Edge Of Darkness” from GVF’s sophomore EP released in November of 2017 (“From The Fires”), featured Jake performing much of the song’s solo with his back to the crowd and his axe behind his head. A legendary showman already in the making, he sent the already jubilant audience into a complete frenzy.

The third number of the evening, “Black Smoke Rising,” and the title track from their first studio EP released in March of 2017, was followed by a sublime cover version of John Denver’s “The Music Is You.” Josh urged the crowd at the start of the song, “If you feel inclined, sing along . . . and sing along for the entire show if you like it.” 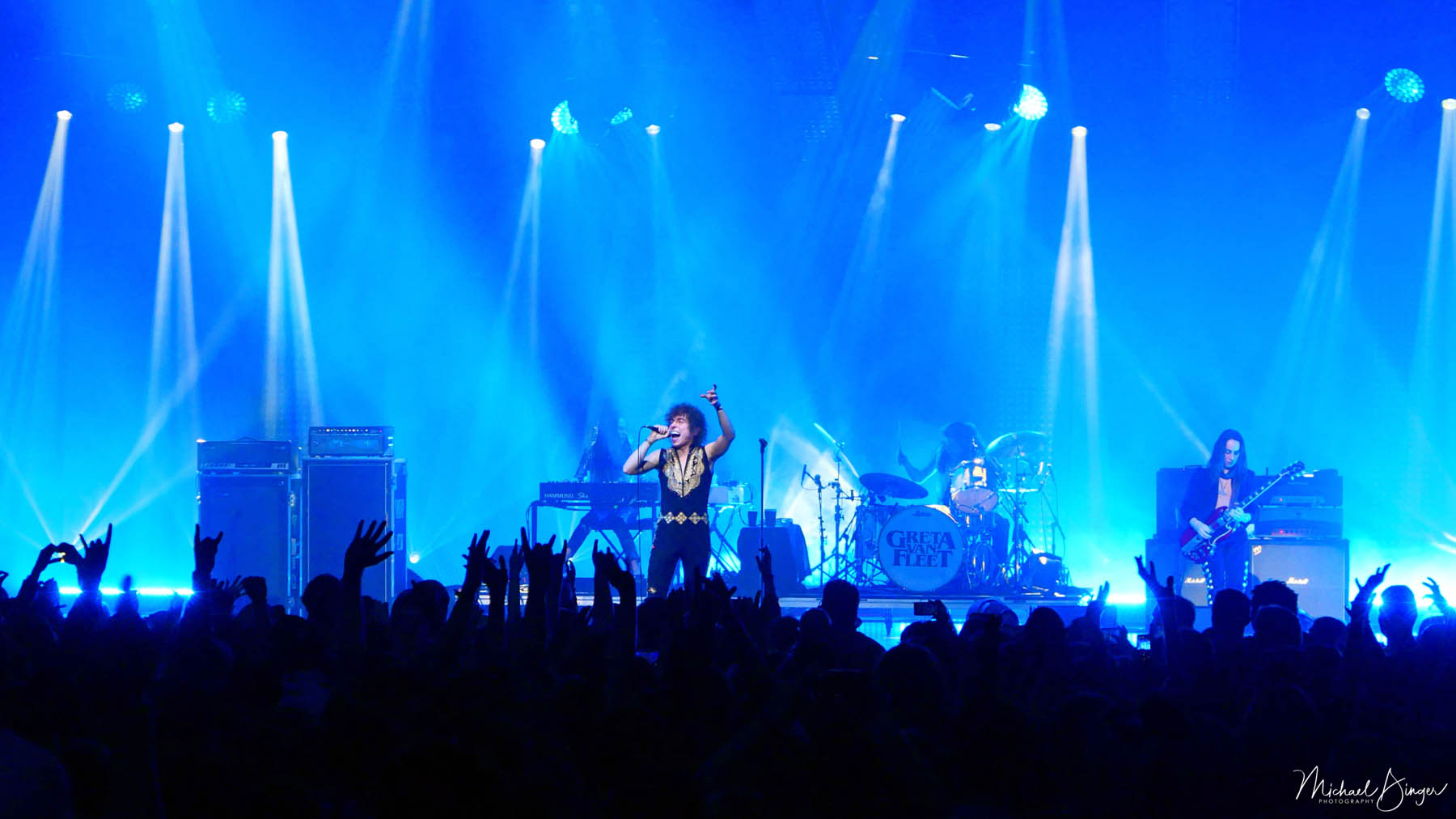 With the exception of “Black Flag Exposition,” three of the next four songs were selected from “Anthem Of The Peaceful Army” and included “You’re The One” (an instant classic rock ballad), the epically-composed “Age Of Man” and the psychedelic “Watching Over.” Although he still seems to be working on his stage presence, with a tambourine flailing in his hand at times, Josh was able to navigate the entirety of the stage on numerous occasions with no difficulties, as his siblings Jake and Sam shared the spotlight and exhibited their own stage personae.

Before launching into the ninth song of their set, and the first one that GVF ever wrote and recorded together, Josh advised the audience to “smoke ‘em if you got ‘em. I know somebody has some good shit out there, it was lofting on me earlier.” As I mentioned earlier, “Highway Tune” is the first song that I ever heard by GVF, and the one that burst them into our collective consciousness. Witnessing the song performed live, with Josh’s patented wailing vocals and Jake’s vintage guitar riff, was an absolute mind-blowing experience.

Returning to the stage for a highly anticipated encore, Josh explained “This song to me is always about life being a celebration of love. It starts in the toes, travels through the body and goes out of the head. Thank you everybody for waiting out in the cold to get in here. This is called ‘Flower Power.’” A brilliant rendition of “Watch Me,” recorded by British artist Labi Siffre in 1972, followed next. The show’s finale, another track from the 2017 “Black Smoke Rising” EP, was “Safari Song.” Having just celebrated his 21st birthday with the GVF faithful the night before, Danny absolutely ‘killed it’ on an epic drum solo to end the celebratory night.

As a fresh decade gets underway, look for new music to be released from these four millennials from Michigan as they continue to spread their shared message of “peace, love and unity.”