It’s been 37 years since the original members of Led Zeppelin performed together for the final time at Eissporthalle in Berlin, Germany on July 7, 1980 – something fewer and fewer fans can say they experienced firsthand. Thousands, millions of people love Led Zeppelin’s music. I am one of those people. And in my opinion what made Led Zeppelin truly great was not Robert Plant’s impressive and rare vocal range, or Jimmy Page’s guitar riffs, or John Paul Jones’ technical soundness, or the fact that John Bonham is considered the best rock n’ roll drummer to ever hold a pair of sticks.

What makes Led Zeppelin truly great is the vast spectrum of sound one can enjoy while listening to their anthology. Bluesy stuff, middle eastern stuff, early metal, these guys dabbled in everything. Bombastic and epic, while at the same time folky, bluesy and mind-bendingly mystical, the recorded music of Led Zeppelin has become the ’70s iteration of classical music. They created timeless anthems which have been enjoyed by generations and generations.

There are hundreds of talented musicians touring the world offering live concert experiences for fans of bands that no longer exist or no longer tour. From Abba, Pink Floyd and Queen to Genesis and KISS, many of these tribute bands have earned respect by providing high-quality live experiences that draw large crowds from existing fan bases and from younger fans who never had the opportunity to see the original bands in their heydays. Get The Led Out is one of them, and at the same time isn’t. They are not your typical “tribute band” and believe me, I’ve seen many excellent Led Zeppelin cover and tribute bands, like Zoso, Led Zeppelin II Experience and Led Zepagain (to name a few) and they all put on a great show. Get The Led Out is a completely different experience. I can attest that after attending to their mind-blowing show last Friday at The Culture Room, a small venue located in the heart of Fort Lauderdale.

The place was packed, and the audience ranking from mid 30’s to late 60’s, and I even saw a couple of people in wheelchairs. The concert started with an introduction that sounded like someone tuning an old radio looking for a station. Static was interrupted with either a Led Zeppelin song or a clip of an interview with the band. Then the band came out and went right into the first number. Right away, I knew this was going to be something special. 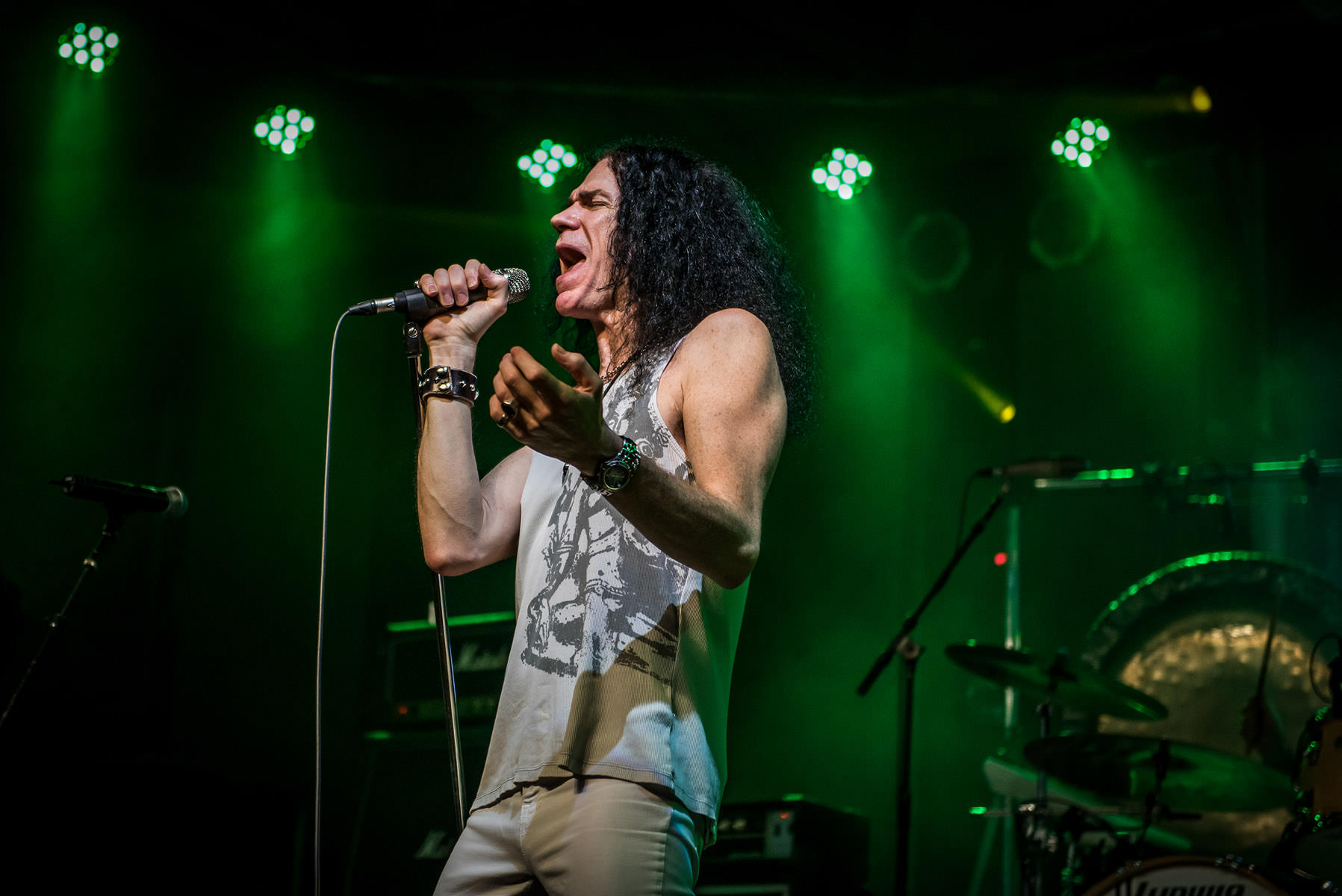 Paul Sinclair of Get the Led Out playing in Fort Lauderdale

Rather to describe song by song here (as whoever is reading this review is familiar with the Zep’s catalog) I want to write about the band. To begin with, the band is comprised by six members. And at this point you might think why’s that. When you think of Led Zeppelin, you think of the songs you grew up hearing on vinyl albums, cassette tapes, compact discs and the radio. These songs were rich and full sounding. They had many layers. Led Zeppelin were masters of the studio and produced the most dynamic and robust sounding albums in history. Get The Led Out is obsessed with capturing this sound on the live stage up to the minimum details, and God knows they manage to pull it off brilliantly. But in order to accomplish this, you need more than 4 musicians. At some points in the concert they have three guitarists, a bass player, a keyboard player, a drummer, and a female vocalist during “The Battle of Evermore” and “Stairway to Heaven”. Their dedication to capturing the Led Zeppelin studio sound even includes keyboardist Andrew Lipke playing a Theremin on “Whole Lotta Love”.

All of these guys are knockout musicians. The lead singer of the band, Paul Sinclair, has a strong and dynamic voice with an impressive range and channels Robert Plant’s tessiture and nuances effortlessly, while maintaining his vocal strength all the way through a trying 2 and ½ hours of performance. There are not a lot of people who can do justice to one of the greatest rock front men of all time, but Sinclair does that and more. Guitarists Jimmy Marchiano and Paul Hammond are one hell of duo. They both played Gibson Les Paul guitars for most of the concert, with Fender Stratocasters mixed in where that surf-riff sounding plucking was appropriate. Hammond switched to an SG double-neck for the rendition of “Stairway to Heaven”, one just like the one Jimmy Page used. Bassist Phil D’Agostino and drummer Adam Ferraioli did an impressive job in the backbone session. The occupational hazard that comes with being a bass player is that people tend not to notice you, however looking at Phil’s fingers you can tell a different story. And on the other hand, everyone who have ever listened to a Zeppelin tune knows is not a picnic on the drums. Bonham was a drummer of a different galaxy, maybe not even human. And the most noticeable God-like quality of his drumming was his speed: he could bend time. To try to describe the impact he had on rock drumming is to attempt the impossible. The wide array of musical styling found in Zep’s music requires the ability to play several complicated and compound beats, and when there’s a band playing a Zeppelin song everyone in the audience wants to hear those magical grooves and beats paired with that pounding sound. It is enough to say Ferraioli nailed them all. And the six man on stage was the super-utility, multi-instrumentalist Andrew Lipke. He was everywhere, played some guitar, some keyboards, sang backup vocals and toyed around with some other cool effects (Did I mention about the Theremin? already). He is the kind of musician who allows the band to have a flexibility and a diversity in their performance which really sets them apart.

Get The Led Out is one of the best live concert experiences that fans of real rock and roll will ever have, and the unanimous and frenetic response of the audience throughout their brilliant set confirms that. They are able to take the vivid, resonant sound of the legendary albums of Led Zeppelin and bring that comprehensive experience to the live stage. If they ever come to your area, you’ve got to check them out. For two hours they will take you back in a time machine, and it will be as close as you will ever get to enjoy the wonderful and sheer glory of these timeless songs. Simply BRILLIANT.