The American progressive power metal legends FATES WARNING, considered by many as the true forefathers of the genre, celebrated the 30th anniversary of their “Awaken The Guardian” album with an exclusive headlining live appearance at the 2016 edition of the prestigious sold-out ProgPower USA festival last Saturday September 9th. The band — in its original “Awaken The Guardian” lineup, featuring John Arch (vocals), Jim Matheos (guitar), Frank Aresti (guitar), Joe DiBiase (bass) and Steve Zimmerman (drums) took the Progpower stage around 9:45 PM amongst the clamoring of an ecstatic audience packing every single corner of the Center Stage. Festival mastermind and organizer Glenn Harveston held a Facebook live chat two days prior to the beginning of the Festival and when asked about what band he felt happier to bring for the 2016 edition he said Fates Warning in a heartbeat. And he couldn’t have said truer words. For thousands of Awaken devotees, this was an event of enormous magnitude. I shouldn’t throw this word around lightly, but it is what it is: “Awaken the Guardian” is cult, it was ridiculously ahead of its time and forever sealed the band’s place in Heavy Metal history. 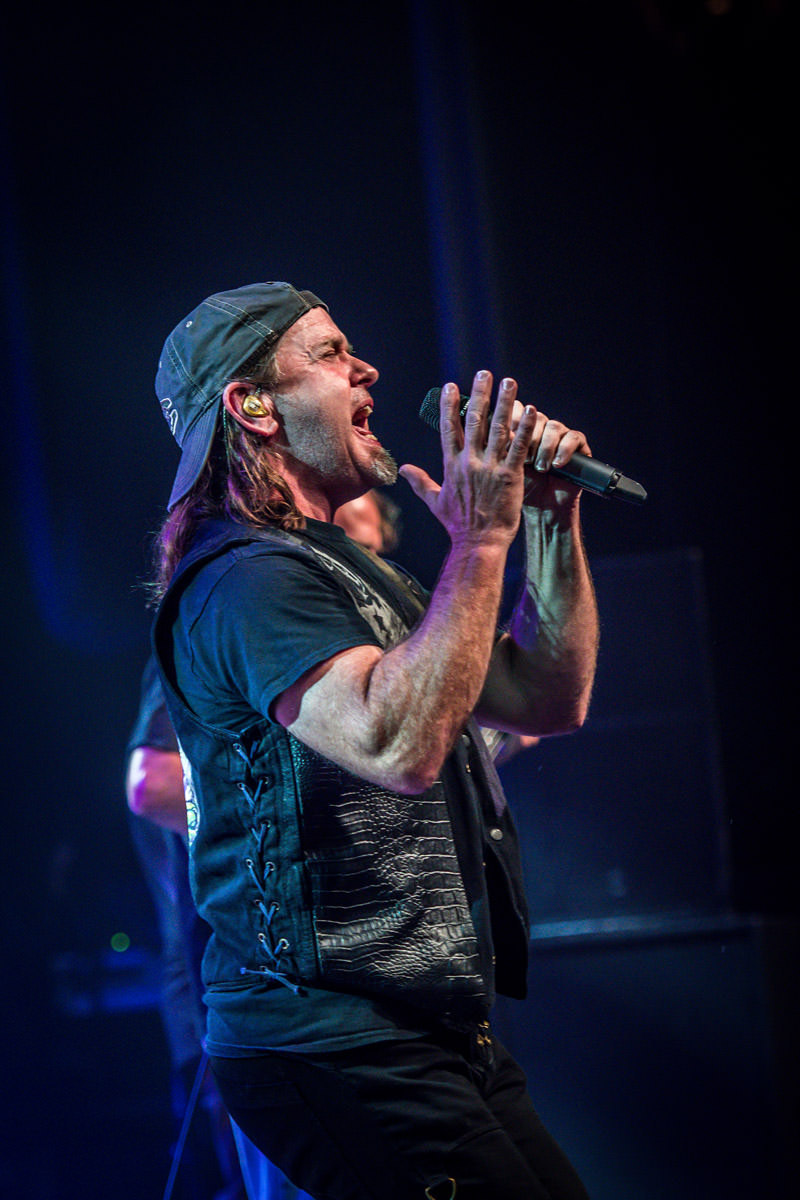 John Arch of Fates Warning singing at The Center Stage

Most prog-metal fans overlook this masterpiece for some reason. In the late 80s there were all sorts of bands already looking to stretch the limits of metal genres by incorporating progressive metal into different styles, but the progressive metal that we know today took a little bit to get going. Still, before all that, bands like Qüeensryche and Crimson Glory were at the forefront of the development of prog-metal. It was just the early stages and while there was clearly a progressive edge to the music, most of it was still based on good old heavy metal. Of all these bands that were shaping progressive metal to come, none were producing better music than Fates Warning and never did Fates Warning hit the nail on the head better than they did on “Awaken the Guardian”. “Awaken the Guardian”, given its release date, was one a landmark prog-metal album when a term as “prog-metal” didn’t even exist. It’s a record that is still as perfect as it was way back; and having the opportunity to behold the legendary album played in its entirety by the original members who created such timeless was worth the price of admission alone. But what made the occasion even more special was the top form the musicians were, and the flawless performance they offered. It really felt like witnessing a show happening in the early 80’s; like if the time hadn’t passed and they were just promoting “Awaken the Guardian” for the first time live.

Despite being only the second time Fates Warning performed an old-school set with Arch on vocals (They played earlier this year in Europe at the KEEP IT TRUE Festival) the band sounded tight as hell. The intricate wildly shifting songs with fluid time signature changes, brutally powerful yet amazingly melodic all the while; the great moments of technicality with a perennial dose of melody, the head-banging riffs in songs like “Guardian” or “Valley of the Dolls”, the odd, jazzy rolls & fluid drum patterns, the ominously burbled bass lines: they served it all with the ease and straightforwardness only real masters of their crafts can do. It was pure magic, music that makes you travel through timeless and ethereal dimensions. And what can I say about John Arch’s vocals? Despite his incredible voice was dormant for years, it hasn’t aged a bit. He still sings (better said wails) like a possessed, giving his spectral tones a particular level of sensitivity. He sang every note to its limits and twisted and turned in every possible direction. It speaks volumes of how great he is, that he had the energy to put on a performance like that in music this demanding and at his age. He commanded the audience with his charismatic presence and his humble attitude, profusely thanking the fans for being present that night. And his delivery on “Guardian” was simply otherworldly. A soul crushing and absolutely emotionally charged performance.

After the last note of “Exodus” ended the band carried on with other songs of the Arch era, like “Damnation”, “Apparition” and “Epitaph”. I really couldn’t believe my eyes, I felt transported on a trip down memory lane to my late childhood’s years when I used to listen to those albums in cassette tapes. The crowd was delighted and euphoric, singing in a feverish elation and thundering applauses. Mike Portnoy, his wife Marlene and his son Max were in the audience seated three seats away from me, and I could see him drumming in the air along with the music. It was truly a one of a kind spectacle, one I will forever cherish in my memories while I live. Fates Warning was a truly special band in their prime, the likes of which only a bare handful of other bands in history can match, and we had a glimpse at it that night. Everything else, every other band in the Festival (And the event was beyond excellent) was a bonus for me.

Once again Glenn and his crew offered the power-metal and prog-metal fans a taste of something special and unique. I still remember the Jon Oliva’s show two years ago performing “Streets” in its entirety, another evening for all eternity. ProgPower USA has become not only the premier and most exclusive progressive and power metal event experience that the United States has to offer, but also the place “where the magic happens”. If you have attended before, you know what I mean. If you haven’t experienced ProgPower yet, I’m really sorry for what you are missing. Your metal-head life will never come full circle until you listen to the summoning and drag yourself to the heavy metal pits in Atlanta next September.